When economist Tyler Cowen finishes his day job at George Mason University and dinner time rolls around, he sinks his teeth into his hobby: blogging about — and eating — ethnic food in and around Washington, D.C. The aptly named Tyler Cowen’s Ethnic Dining Guide reflects decades spent exploring and documenting world cuisine.

“The good food in this area is ethnic food. There’s some good fancy American and French food in Washington, but it’s not overwhelming,” he said. “It is about Afghan, Sichuan, Vietnamese and El Salvadorian — that is the new American food in this area.” 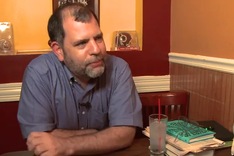 “R&R Taqueria is a small space and the guy who cooks is just amazing. It’s as good as real food in Mexico City,” Cowen said, before mentioning that he’d been to Mexico at least 16 times. “I know Mexican food very well and this guy is the real thing.”

A Cowen foodie tip? To find great places, let your feet do the walking, not your fingers.

“A lot of people when they go out to eat, they’ve got [their] iPhone, they Google places to death in advance, they have a whole plan.” Cowen prefers exploring places unaided by digital reviews.

“What I like is trying to figure out where to eat using intuition and encountering serendipity. If you over-analyze in advance, that’s not nearly as useful as your own wits.”

We recently tagged along with Cowen for a dinner at Eyo Restaurant and Sports Bar, a family-run Ethiopian restaurant tucked into a strip mall in Northern Virginia.

“Don’t rule anything out,” he advises. “Good food is where you find it.”