George Takei, the famed actor and activist perhaps best-known for his role of Sulu in Star Trek or for his posts on civil rights to his millions of social media followers, has lived many lives. Among them: he was one of roughly 120,000 Japanese-Americans who lived through internment after Japan attacked Pearl Harbor, an experience that he says he feels more obliged than ever to discuss.

He recently recounted in the The New York Times, “I was 7 years old when we were transferred to another camp for ‘disloyals.’ My mother and father’s only crime was refusing, out of principle, to sign a loyalty pledge promulgated by the government. The authorities had already taken my parents’ home on Garnet Street in Los Angeles, their once thriving dry cleaning business, and finally their liberty.”

“America is a diverse country. But we all subscribe to the values and the spirit and the Constitution of the United States.” — Actor George Takei

After they were released, he and his family had to readjust. Takei ran for school government in junior high and high school, studied architecture at the University of California, Berkeley and earned a degree in drama from University of California, Los Angeles. A turning point for his career came in 1966 when he began playing the role of Hikaru Sulu in the Star Trek television series. From the beginning, Takei fought stereotypes and tropes imposed on his character — in one instance, for the Star Trek episode “The Naked Time,” Takei convinced writer John D.F. Black that Sulu shouldn’t be holding a samurai sword, but instead one more like something Robin Hood would use. 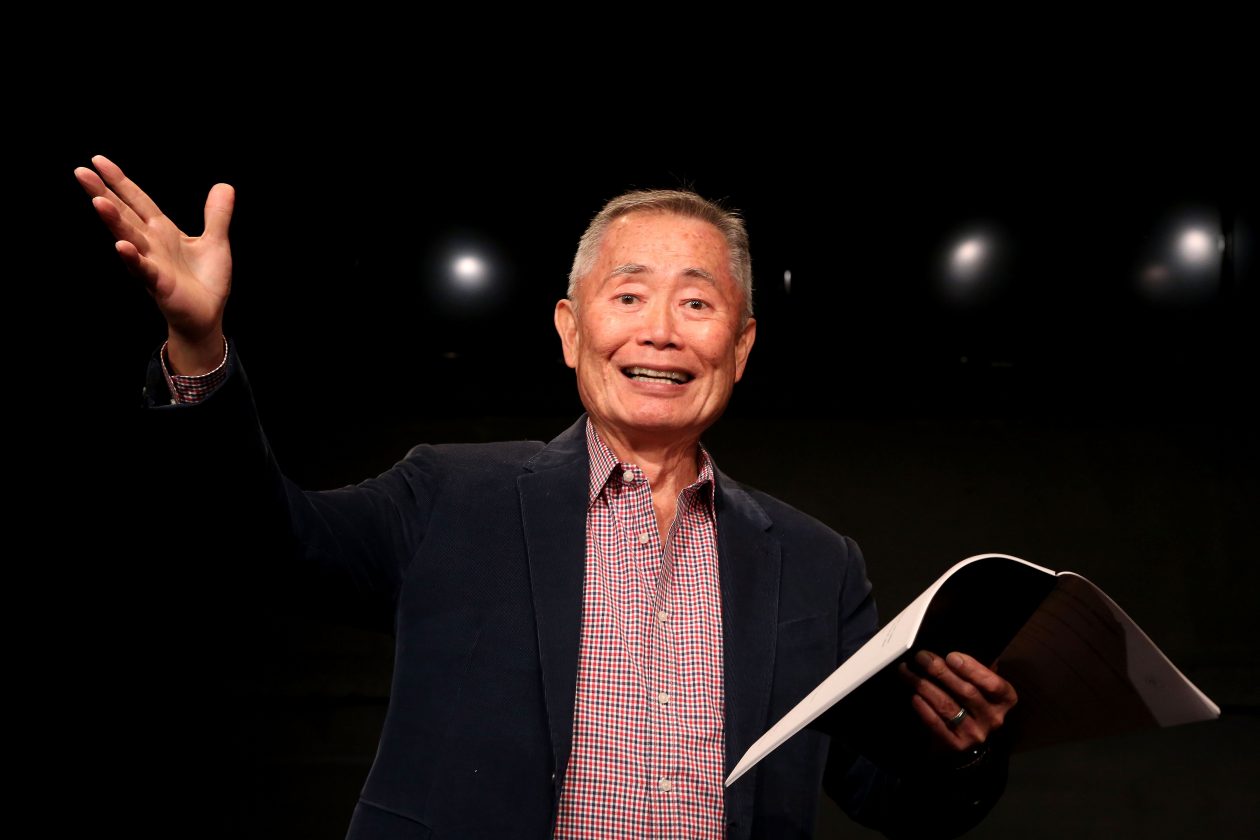 Since then, his voice and influence has continued to grow as a community activist, writer and performer. He told the Associated Press in 2005 that, “The world has changed from when I was a young teen feeling ashamed for being gay.” Then he declared marriage was his next political issue, saying, “That would have been unthinkable when I was young.”

In 2011, he offered his last name in replacement of the word “gay” when the Tennessee state legislature passed a bill that prohibited school teachers or students from talking about sexuality with students, including language that alluded to gay people. He suggested people instead say they support “Takei” marriage or are going to a “Takei” parade, forever imparting the saying “That’s so Takei” to American culture.

Now, he’s starring in the off-Broadway play musical Pacific Overtures, written by Stephen Sondheim and John Weidman and performed at Classic Stage Company. The musical follows the westernization of Japan during the period when U.S. Commodore Matthew Perry in 1953 set out to open the isolated islands to international trade.

This year, 75 years after the executive order that authorized internment, Takei is using his platform to denounce the current administration’s approach to immigration, and, recently, to criticize Uber for its treatment of workers.

Takei’s warm presence, online and in person, is both indelible and quietly captivating. He recently sat down with the NewsHour Weekend to discuss his work and the importance of learning about a shared American history, from internment to activism and the ongoing fight for civil rights.

Tell us about the role of the Reciter in Pacific Overtures.

There is a history to Pacific Overtures. When it was first done, Hal Prince, the director, initially was absolutely smitten by Kabuki, the classic Japanese theater form. And he wanted to interpret this story in that structure. And so he, the Reciter, is an organic part of Kabuki, as are the black-clad stagehands and wardrobe people that come in stage and help with the changes. And so the reciter is traditionally someone who helps with the — with the exposition and transitions and some of the interior monologue of the actors.

This production at the Classic Stage Company is directed by John Doyle. He is a person who puts his signature on everything. Here, he took on this story, a chapter from Japanese history that involves the first time participation of Americans, an American commodore named Matthew Perry, who comes to an isolated, closed, severely closed-off Japan to open it up to trade. Well, he took this story and reduced it down to its essential minimal. And that’s very Japanese.

Then by the end of the play, you see a Broadway musical with high kicking and things being strewn about. But it’s quintessentially a Japanese production, different from any other previous productions which claim to be Kabuki style.

The role that I play is a remnant of that. The person who helps with the exposition and transitions and actually takes part in that as a character. 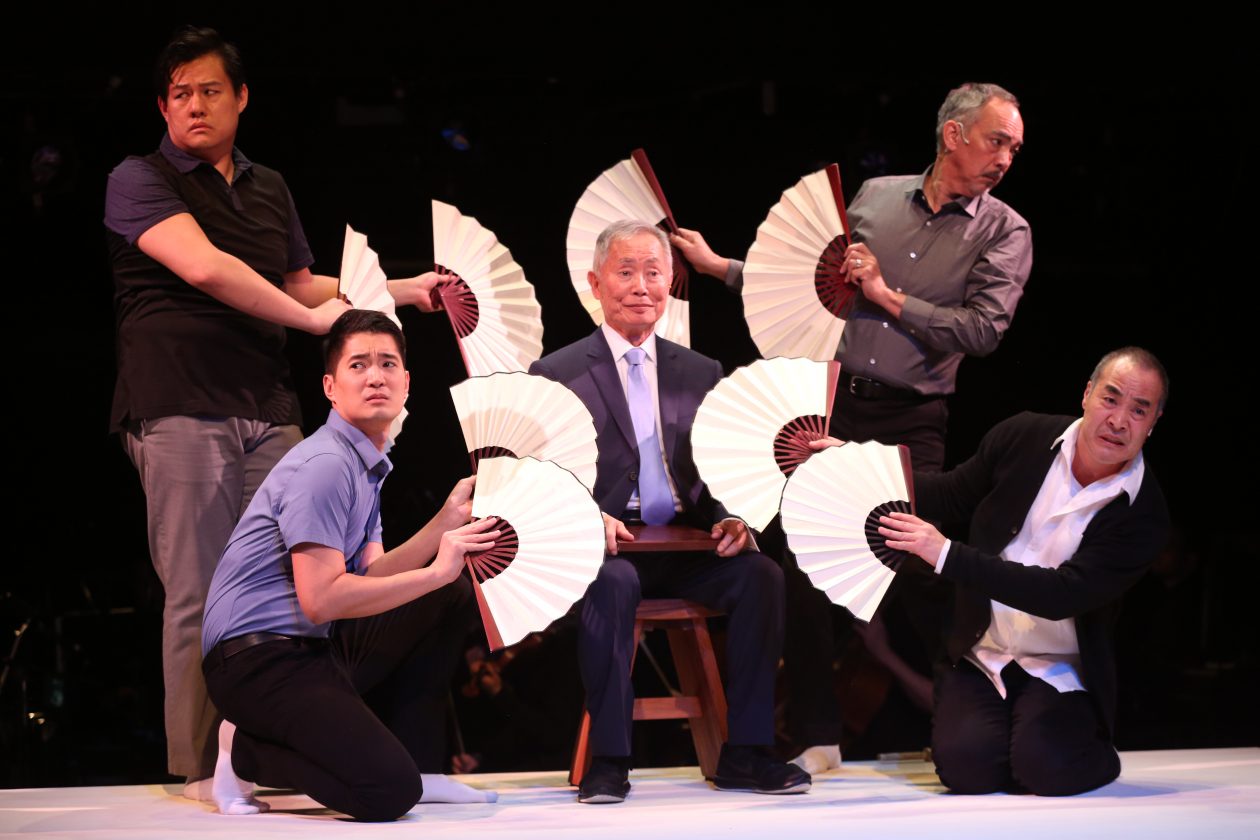 Do you have any concerns when people who aren’t from Asia tell the stories of Japanese people or Asian people?

You know, Shakespeare wrote about Italy, or a Moor from North Africa. A gifted artist who has the integrity to really do the research is much better than the actual someone of that ethnicity who doesn’t have that talent. A true artist takes on a project with that kind of integrity to doing a truthful job. Then, for example, John Doyle was born and raised in Inverness, a Scotsman, but away from the urban areas of Scotland, a northern, coastal village. And yet he’s able to understand the essence of Japanese aesthetics and create a singularly Japanese show.

Do you ever feel as if you’re asked to speak for entire communities or communities that you don’t necessarily identify with?

Well, I am an American. America is a diverse country. But we all subscribe to the values and the spirit and the Constitution of the United States. I don’t need to have my integrity as someone of Japanese ancestry, although I do have that too, because Japanese Americans have a singular American history. But I am an American, and I will speak as an American.

What can people do to prevent persecution of the Muslim community?

Our educational system leaves a great deal to be desired. I’m always shocked, to this day, when people that I consider reasonably well-read and informed are shocked when I tell them about my childhood behind American barbed-wire fences. They’re absolutely aghast that something like that happened. That’s why we did Allegiance, a musical based on the internment of 120,000 Japanese Americans, innocent people. Not a single case of spying or espionage or sabotage was proved. We were all 100 percent innocent. But the kind of brutality that went on in the camps, the horrors, and then to be impoverished, and then when the war’s over, the gates are opened and you’re free.

We were destitute. Literally destitute. And yet we came back up from that. I remember how my parents struggled and really had a very, very difficult time getting back on their feet, and they educated three children, gave us fine educations. And that is the key. More people need to know who we are and where we came from as Americans.

If you could use three words to identify yourself, what would they be?

I am an American.

You tweeted to #DeleteUber several months ago, and it was re-tweeted thousands of times. Is it overwhelming to have that kind of influence?

Lyft donates $1mil to ACLU while Uber doubles down on its support for Trump. #DeleteUber

Business is part of our society. I believe in praising people that are doing good work. Uber didn’t treat their drivers properly from way back, and the riders were also put in jeopardy. There was no insurance. All this. Information is what we should base our life on. Certainly information about our history and who we are as a people, but certainly in the daily course of life we need to be informed.

What do you think is the most effective way to talk about offensive language?

It depends on the situation and the person you’re talking to. It’s usually someone who’s ignorant, but you know, basic fundamentally a nice guy. Then you try to educate that person. If it’s someone that is enraged, and I don’t know why, but that’s a situation that you need to be very careful about. In this day in age, when we have that thing called guns so loosely available, a racist who would be enraged publicly is a dangerous person. You make your judgment in that situation.

Interview has been edited for brevity and clarity. Pacific Overtures is playing at Classic State Company through June 18, 2017.