How the Grammy Awards’ ‘In Memoriam’ tributes are made

The “In Memoriam” segments made for the major televised award shows are usually notable for their exclusions. The Grammys are no exception, as perceived “snubs” draw commentary the next morning.

On average, two and a half to three minutes are set aside during the hours-long telecast to pay tribute to the late-greats of the music industry. And, inevitably, it’s a bit of posthumous politics that decides who wins a spot in the photo-and-film sequence.

Comedian Joan Rivers was left out of the 2015 montage even though she won her first posthumous Grammy the same night. The following year, Natalie Cole’s family said the tribute to the singer who famously sang “Unforgettable” was “forgettable.”

With so many big stars lost this past year — Prince, Leonard Cohen, George Michael —  the NewsHour spoke with Ken Ehrlich, 74, the telecast’s longtime executive producer. This telecast, held on Feb. 12, will be Ehrlich’s 37th year of producing the show.

As executive producer, you orchestrate every collaboration, every detail of the Grammy Awards. Where does the “In Memoriam” segment fit in amid all of your duties?

Well it’s a very important piece of the show; it’s become that. And we didn’t do one for a number of years because our show is all entertainment. The reality is that [the segment] took the place of another performance. It was important that if we were going to do it, we’d tie it to a performance.

So, 2004 was the first time we actually did an “In Memoriam” segment. We did it and tied it together with Joe Strummer from The Clash, who passed away that year. And we built a pretty remarkable payoff, a finish to the segment. It was like the others since: a montage of photos and stills and some music from the artists who passed away. And then that year we hit it off with a pretty incredible performance with Bruce Springsteen, Elvis Costello, Dave Grohl and Steven Van Zandt.

And after we did that, there was no question that an “In Memoriam” would come up as part and parcel in our show.

What is your overall vision for the segment?

I don’t know that I have a vision. We do it to honor the memory of artists who had an impact on our musical landscape. It doesn’t vary very much. We try to find appropriate photos or stills or film clips of these artists and put a little music pad under it when we can.

We can’t do them all. So, it becomes this kind of montage that, hopefully, at least acknowledges a number of musical personalities or people who have been involved in music over the years.

How do you then decide who’s in and who’s left out in the tribute?

There’s a couple of ways. There’s a committee at the Recording Academy and, in December, when we’re getting reasonably close to the show, we will put together a list that goes into the hundreds, 300 to 400 people. We then go through that list and this committee votes. We all vote and pick our favorites. And from that, we cut it down to a reasonable number.

The number we kind of have in mind is 50 because 50 goes into three minutes without too much difficulty. Sometimes, we’ll do a little more. Sometimes — very seldom — we’ll do less.

There’s always people we want to include. Once it gets past that, it’s unwieldy and it’s hard to handle. And my feeling has always been, there’s a [time] limit to any performance on this show, whether it’s artist-driven or, in this case, driven by the loss of people who brought us great music.

Do you brace for the inevitable next-day stories that say a particular artist is left out?

Yeah, we can’t please every[one]. I like to think we do a pretty good job, but there’s always criticism of it. Again, we start with a list of 300 worthy people. We can’t do 300 worthy people. At some point, it becomes subjective. 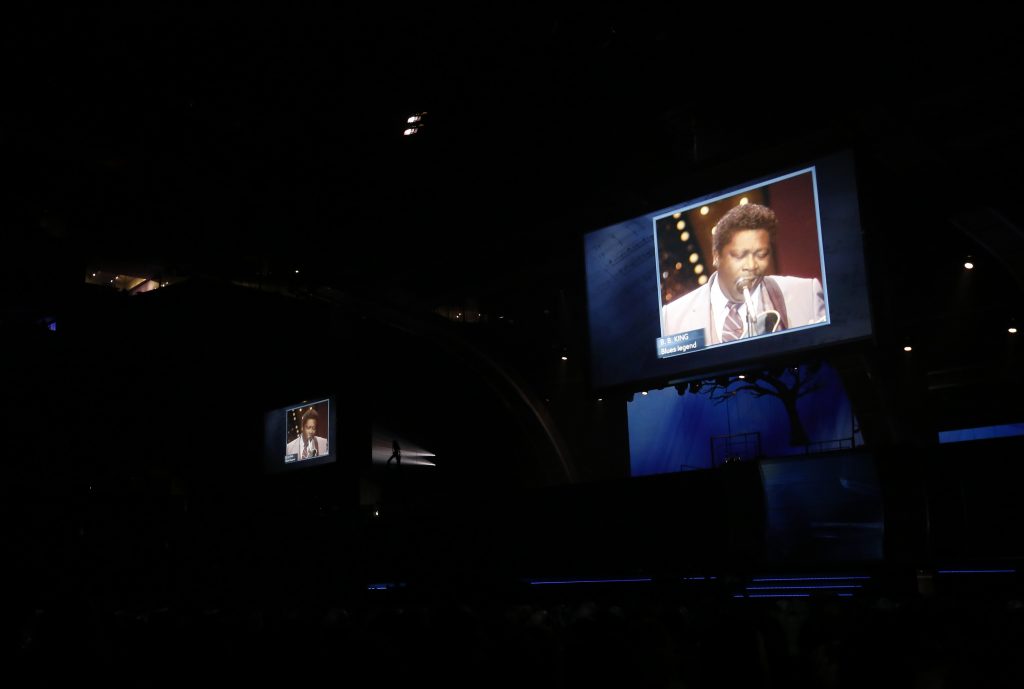 B.B. King is seen on screen during the 2016 “In Memoriam” tribute during the 58th Grammy Awards in Los Angeles. Photo by Mario Anzuoni/Reuters

Was there a particularly difficult year to compile?

Well, last year was difficult. There were so many deaths within a six-week period of our show. From Dec. 31, when I think Natalie Cole died, shortly thereafter Maurice White of Earth, Wind & Fire passed away. David Bowie had died shortly before that. Last year, we probably did more than we had ever done before.

And people like these segments. They like the tributes. It’s one of the most loved. We’ve done a number of Emmy shows. Now, it’s a different animal. But on the Emmy shows, when they’ve done the research about the show, the “In Memoriam” segment on the Emmy shows is one of the most highly rated, highly favored segments on the show. People do like these segments, and we do like doing them.

WATCH: A classical pianist on her genre’s ‘golden time’ — and Ray Charles

Left: Elton John (C) and others perform "The Weight" as a tribute to Levon Helm of The Band, to members of the Recording Academy that passed away in 2012 at the 55th annual Grammy Awards in Los Angeles. Photo by Mike Blake/Reuters