How giving away free books became a Baltimore institution

The Book Thing of Baltimore started out in the back of owner Russell Wattenberg’s van. Today, it’s a four-room warehouse where anyone can walk in, take as many books as they want and walk out. There’s no cash register and no clerk, just rows and rows of free books for anyone who wants them. If you want, you can donate a book or two.

It’s the kind of quirky institution that Baltimore is famous for, but Wattenberg said he never planned on making Baltimore his home, or on giving away free books for a living.

It all started in 1995, when Wattenberg stopped for gas on his way from New York to visit his mother in Florida at the tail end of a long and difficult year for his family. He was exhausted, and stayed the night with a friend of his in Baltimore, who offered him some work locally.

He stayed a few more weeks, and eventually began tending bar, which was where the The Book Thing began.

“I had a lot of thirsty school teachers come in [to the bar]….They would all complain about not having enough books for their classes.”

“I had a lot of thirsty school teachers come in,” Wattenberg said. “They would all complain about not having enough books for their classes.” Wattenberg had always collected books, whether it was an old copy of “To Kill a Mockingbird” for 10 cents or Plato for a quarter. Wattenberg told the teachers to go to the back of his van and take whatever they needed.

Word started to spread. People would come into the bar and give Wattenberg books to hand out, and Wattenberg started leaving his van unlocked for people to drop off books and shop around, a bold move in a high-crime city like Baltimore.

After running The Book Thing out of rented garages for a few years, Wattenberg bought and moved into a warehouse in 2005.

From the outside, it looks more like an auto shop than a book shop. There’s a large garage door, a huge wooden bin to drop off books and a metal book drop window. The inside of The Book Thing contains more traditional shelves filled with books separated into genres, but the books aren’t alphabetized, letting visitors scour the shelves to look for buried gems. 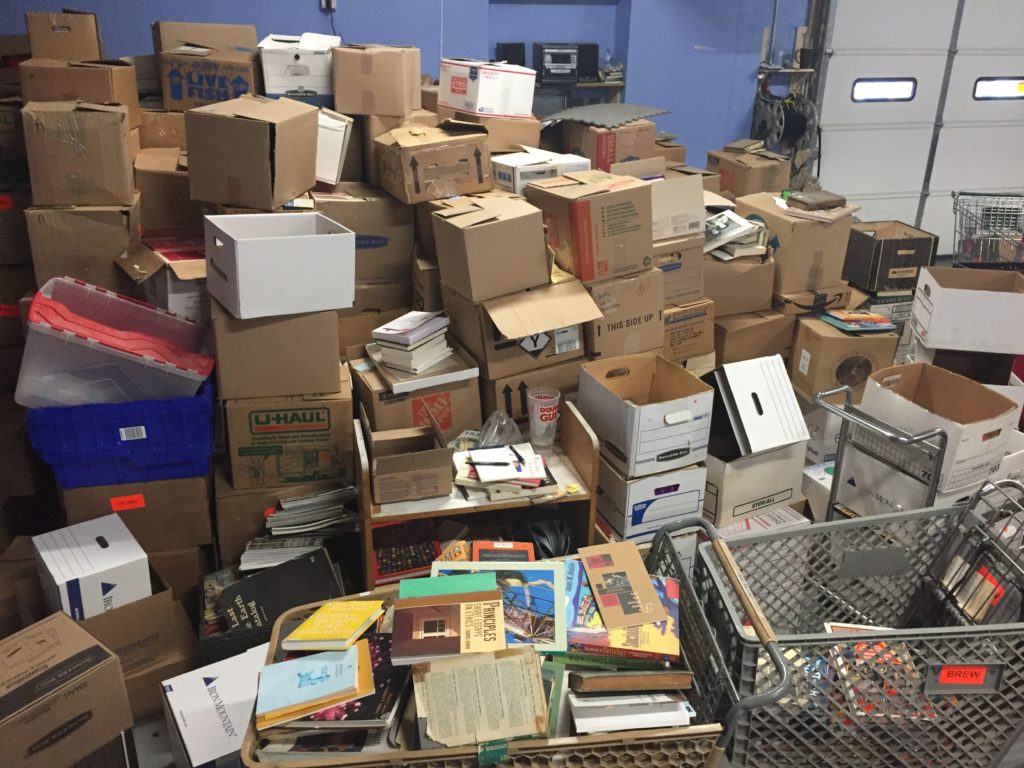 Piles of donated books at The Book Thing. Photo by Michael Boulter

Wattenberg works at The Book Thing 100 hours a week, giving himself a salary of $13,500 a year. On top of running the business side of things, Wattenberg also goes through every book donated to The Book Thing, which receives about 10 – 20,000 donations a week.

Wattenberg has also found break up letters and love letters, though more of the latter.

Sinclair Clunas, who works as an art teacher for Baltimore City Public Schools, has known Wattenberg for as long as he’s been handing out books. She said that The Book Thing has been a valuable resource for her classroom. 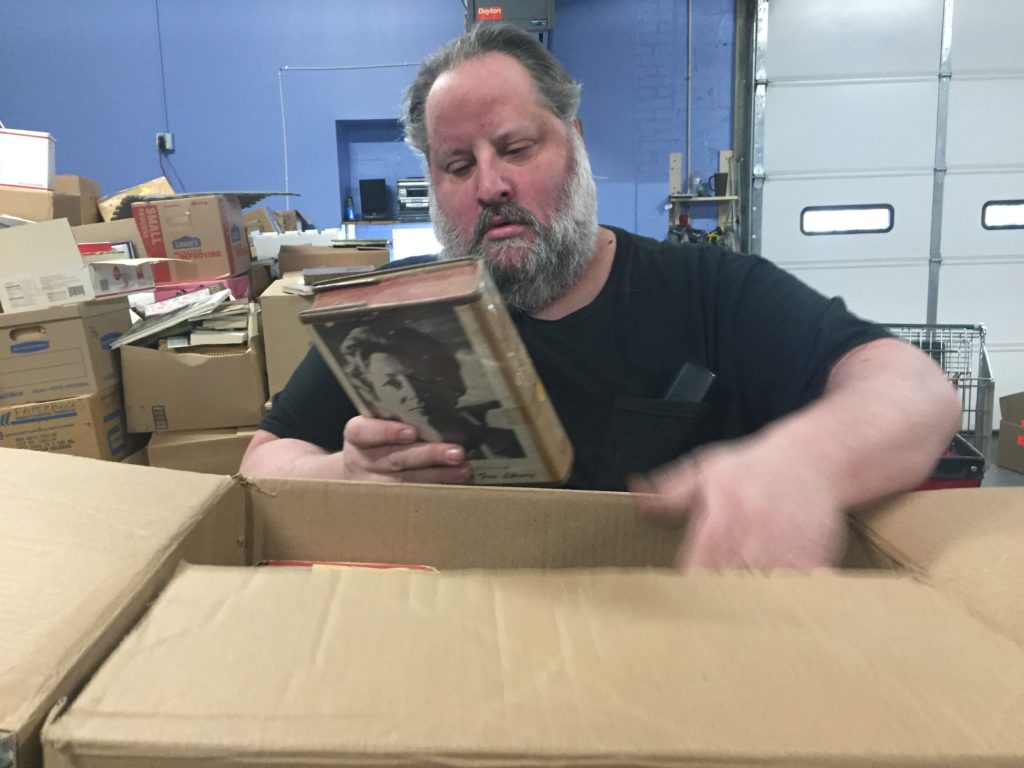 Russell Wattenberg, owner and founder of The Book Thing of Baltimore, Inc., said he never planned on making Baltimore his home, or giving away free books for a living. Photo by Michael Boulter

“It’s a wonderful place to get resource materials for my students,” Clunas said. When she first heard about The Book Thing in the late ’90s, she said, Baltimore Public Schools didn’t have art textbooks for its classes, so she would go there to pick up whatever art books they were offering.

By 2016, The Book Thing had become an established and beloved hub for book lovers across Baltimore and the surrounding region. Then, in March of that year, The Book Thing caught fire.

One day, at 5 a.m., a neighbor ran to Wattenberg’s house to tell him that The Book Thing was in flames. By the time Wattenberg arrived, the fire department was already there. He was stunned at the scope of the damage.

Everything was destroyed, from the bookshelves to the insulation to the roof, along with 200,000 books — half of The Book Thing’s inventory. The cause of the fire is still unknown.

“There was this really wet, burnt pile of books about waist high in the parking lot,” Book Thing volunteer Joe Neumann said.

Esta Baker, a frequent Book Thing donor who had dropped off 200 books the previous day, said she could smell the smoldering pile of books blocks away.

Wattenberg, though, was determined to rebuild. He credits good insurance — and the overwhelming community support — with helping The Book Thing get back on its feet.

“What really struck me was, after the fire, is that even while the firemen were still there … people come up to me, not saying a word, just in tears, and giving me a hug,” Wattenberg said. “The community came out in just huge numbers.” A couple weeks after the fire, the nearby Peabody Heights Brewery hosted a fundraiser that drew 640 people.

It was only after the fire that he realized what The Book Thing meant to people.

Neumann said it was only after the fire that he realized what The Book Thing meant to people: “the scale of it, the importance of it within the city, the resource.”

“Sometimes I don’t see the end user,” Wattenberg said. “I’m in the back going through books to get them ready to go out on the shelves.” Seeing everyone come out “really shocked me,” he said.

The Book Thing reopened this past October with a handicap-accessible bathroom, a repaired roof, a new ceiling, new bookshelves and a heater, something the building had previously lacked. 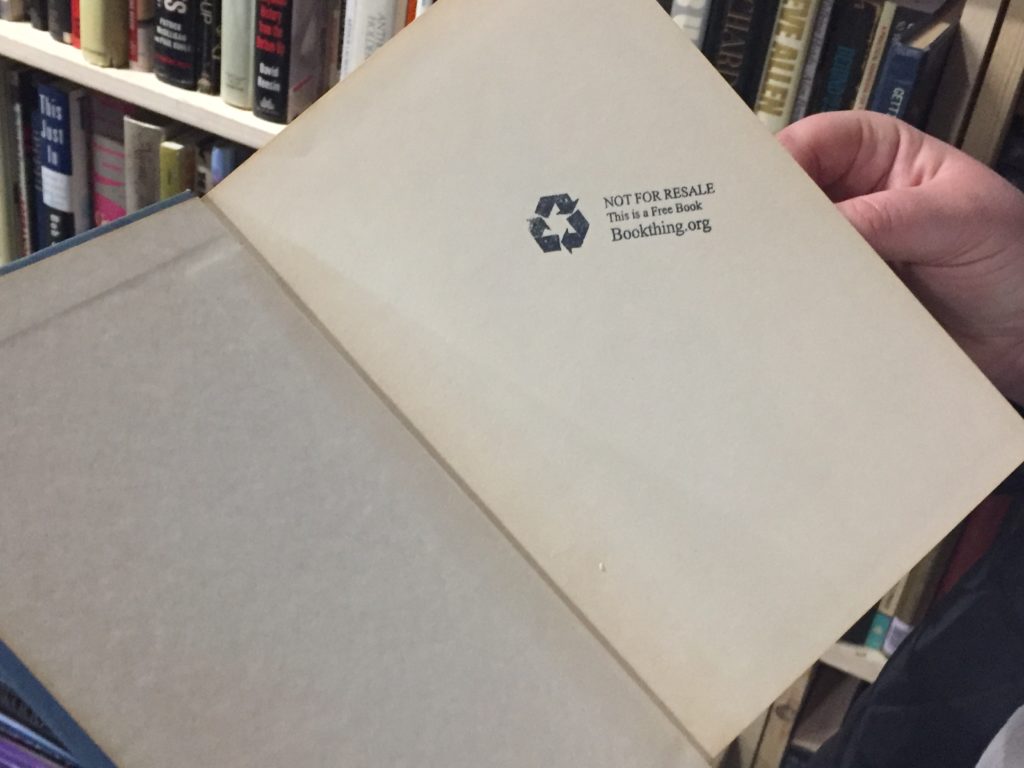 Neumann said sometimes there will be “a dry week where there’s nothing really good and you’re like, ‘Oh, that’s it. All the good books are gone. Baltimore is finally dry. … And then the next week you come out with two enormous tote bags of books.”

Wattenberg plans to continue The Book Thing’s mission well into the future.

“There’s no way for somebody who has their uncle Joe’s collection of World War II books to walk around to everyone in Baltimore and say: ‘I have these books, they’re all free, do you want any?” Wattenberg said. “All I am is a middle man… [But] if a book is sitting in a box, it’s not doing anybody any good. It’s not a book, it’s a stack of paper.”

Left: The Book Thing has become a beloved hub for book lovers across Baltimore. Photo by Michael Boulter