How Homer’s ‘Odyssey’ is relevant today

Our May pick for the PBS NewsHour-New York Times book club, “Now Read This” is Daniel Mendelsohn’s “An Odyssey: A Father, A Son, and An Epic.” Become a member of the book club by joining our Facebook group, or by signing up to our newsletter. Learn more about the book club here. 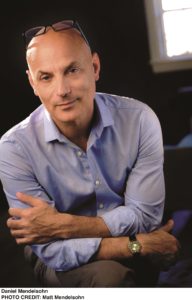 In Daniel Mendelsohn’s “An Odysssey,” a nonfiction book that’s part memoir, part literary criticism, readers are taken on two journeys. One is the journey Mendelsohn takes with his elderly father, Jay, who decides to sit in on his son’s college course on Homer’s “Odyssey.” The second is a journey through the ancient Greek text itself, which Mendelsohn unspools for readers while delving into his history with his father.

“I’m creating parallels between my family story and the story of Homer’s ‘Odyssey’—not least, to remind them that the classics are classic because all of us are always living the same old stories and dynamics,” Mendelsohn writes, “always enacting the same old characters and themes: fathers and sons, parents and children, husbands and wives, the allure of adventure versus the comforts of home.”

Below, in an annotated page of “An Odyssey,” read more about what Mendelsohn was thinking as he wrote the book, and why Homer’s “Odyssey” remains relevant today. (Click on the yellow highlights to see the annotations.)

The house I grew up in was crisply well organized, the contents of every closet, bookcase, refrigerator, and freezer hung or shelved or stacked with rigid rationality. Claire’s house was as exciting and unpredictable as her schemes and plots. Her basement, crammed with the refuse of many long-dead relatives, was a paradise for me, the bony lampstands and old brass candelabra and chunky Lionel trains winking and gleaming in the dark with as much promise as the contents of King Tut’s tomb. There were many noisy pets, including three excitable dogs, one of which was a hyperactive Chihuahua named Benny B. Boychikl. This dog tormented my poor father, who, we all knew, had been bitten by a rabid dog when he was a small boy and had had to have those horrible shots in the stomach for two weeks afterward. Because of that childhood trauma he was never comfortable around even the friendliest canine; he’d cross the street to avoid our next-door neighbor’s toy poodle. So it was torture for him to go to Aunt Claire and Uncle Howard’s house. He’d sit miserably on the sofa beneath The Blue Boy while the dogs jumped and snapped and snarled somewhere down around his legs, his head arced up and back above the yapping like that of a drowning man above the waterline, his mouth set into a tight horizontal, the eyes narrowed, the hollow cheeks sunken beneath the staring cheekbones. Then Claire would walk into the room holding a mug of coffee, a long white cigarette dangling from a pink-glossed lip, and the dogs would suddenly grow quiet and, after an inquisitive moment in which they looked from my father to her, would trot over as quietly as if she’d put a spell on them, dainty as ballerinas, and lick her outstretched hand. None was daintier than Benny B. Boychikl . . . Boychikl, which is Yiddish for “little boy,” was what Claire called me, too. Boychikl! she’d cry as I entered a room, chuckling throatily as she started brewing another pot of coffee, using the special “Spanish” (as we called it) grind she liked—a coffee so inky and strong that it was like a drug. Both hands held high, like a cartoon illustration of amazement, the bright mascaraed eyes opened wide, and the flawlessly arced brows comically raised, she’d shout Boychik! and throw back her small head with its reddish mane and guffaw with rasping delight. On a whim, I recently searched the Internet for the word boychik. When you do so, a wiki appears offering a definition (“a term of endearment for a young boy, or a young man”), followed by this sample sentence: “Boychik, your daddy would be proud of you if he were alive.”

This excerpt corresponds to the Vintage paperback version of “An Odyssey.” The page number may be different in other versions.