We’re excited to announce that Daniel Mendelsohn’s “An Odyssey” is the May pick for the PBS NewsHour-New York Times book club, “Now Read This.” 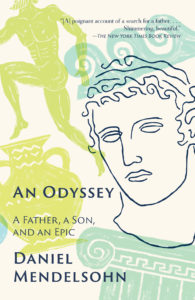 “An Odyssey: A Father, A Son, And An Epic” is the story of what happened after Mendelsohn’s 81-year-old father, Jay, enrolled in his college course on Homer’s “Odyssey.” While the book is family memoir, it is also part literary criticism, as Mendelsohn’s narrative tells us much about — and even reflects — the Greek epic poem itself.

In his review of the book, New York Times book critic Dwight Garner writes that he knew he’d get a learned account from Mendelsohn, who is a classics scholar, translator, critic, writer and the editor-at-large of the New York Review of Books. “What catches you off guard about this memoir is how moving it is. It has many complicated things to say not only about Homer’s epic poem but about fathers and sons,” Garner writes.

In the coming days, we’ll post discussion questions for “An Odyssey,” an annotated excerpt from the book, and writing advice from Mendelsohn. And at the end of the month, he will answer your questions on the PBS NewsHour.

Just joining? Become a member of the book club by joining our Facebook group, or by signing up for our newsletter. You can find all of our book club content here, or look back at our conversations about previous selections for the book club below: