How ‘Reservation Dogs’ became a breakthrough hit for Indigenous representation

The concept seems like a simple one, but for fans, and the cast and crew of “Reservation Dogs,” the hit FX on Hulu show, nuanced examples of what life is like growing up on “the Rez” are few and far between.

“‘Rez Dogs’ is changing the game,” said Sierra Revis, an assistant art director for the show. “There’s been so many moments on the show where it’s just felt like they’ve been tapping into my life. It’s ‘cause this is a community project about community, and I think it’s hard to find another show that’s done that before.” 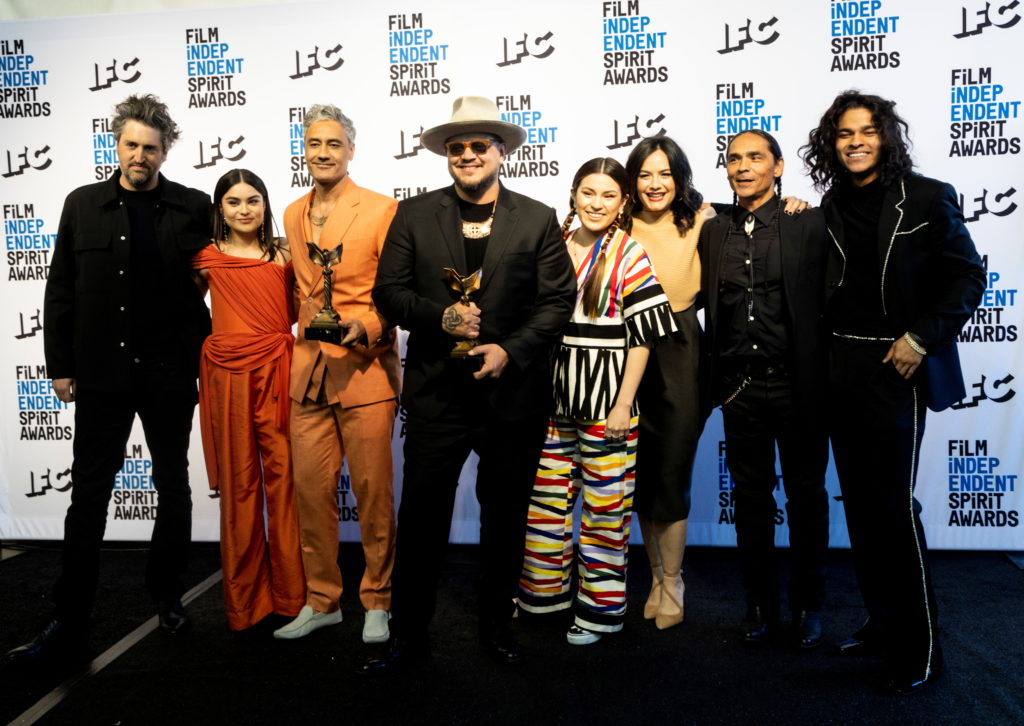 Director and actor Take Waititi, creator Sterlin Harjo and cast of the “Reservation Dogs” pose in the photo room after receiving the Best New Scripted Series award during the 37th Film Independent Spirit Awards in 2022. Photo by Aude Guerrucci/Reuters

The show, which premieres a new season Aug. 3, follows the exploits of four Indigenous teenagers — played by D’Pharaoh Woon-A-Tai, Devery Jacobs, Paulina Alexis and Lane Factor — living on a reservation in rural Oklahoma who are working (and scrounging) in hopes of making it to California.

While “Reservation Dogs” is a comedy by genre, co-creators Sterlin Harjo, who grew up in Holdenville, Oklahoma, and New Zealand director Taika Waititi have said they wanted to illustrate real problems facing Native youth and not shy away from the difficulties and inequalities of Native American life.

“I think portraying Indigenous communities in this way is very new,” said Waititi, the director behind films “JoJo Rabbit,” “Thor: Love and Thunder”), in pre-show press. “What we tend to get portrayed as is someone running their hands through the wheat grass and getting their answers from the wind. I’ve never done that. I don’t know any ghosts, and I don’t talk to trees.”

“I grew up loving comic books and being interested in girls just like the other kids,” he added.

“This is a community project about community, and I think it’s hard to find another show that’s done that before.”

Part of what sets the show apart is its all-Indigenous writer’s room, crew and regular cast. Native Americans landed just 0.3 percent of all top film roles in 2018 and 0.5 percent in 2019, according to the University of California, Los Angeles latest “Hollywood Diversity Report.” Native women did not land any of these roles in 2018 or 2019. Native directors were not behind any of the top films in these years, either.

A 2020 inclusion report from the Writers Guild of America West’s Native American & Indigenous Writers Committee found that 1.1 percent of the about 2,400 television writers for the 2019 to 2020 season were Native and Indigenous. Among screenwriters, that figure drops to 0.8 percent among the about 1,800 people who held the jobs.

Part of the show’s success is that it does away with the pitying and mysticism tropes of the “sad Indian,” said Frances Danger, a Native freelance journalist.

“It’s nothing like I’ve ever seen or felt before,” said Danger, who is a member of the Muscogee and Seminole nations. “We are so often seen as historical relics. To see us in a modern setting, dealing with real problems – but also rez problems – was so refreshing and says, ‘We are here. And we are going to represented.’”

A lack of Native representation

UCLA’s diversity report and data from the writers guild show a lack of representation and the portrayal of Indigenous stereotypes in media have undermined and damaged Native culture and heritage.

In a 2020 letter directed at the Hollywood film industry, Harjo and 27 other members of the guild called for a commitment to advance Native and Indigenous representation “in all facets of television and film,” while asking for more “authentic and equitable” stories of Native American and Indigenous narratives.

The letter went on to specify that a lack of representation “contributes to the harm of Native and Indigenous women” and allows misconceptions to “continue regarding the legal rights of Native Nations.” and Native American creatives are sometimes hired only as cultural consultants, rather than key contributors to projects, the letter added.

That’s a reality Harjo himself has seen first-hand and a reason he was hesitant to let himself believe that “Reservation Dogs” could ever become a reality. 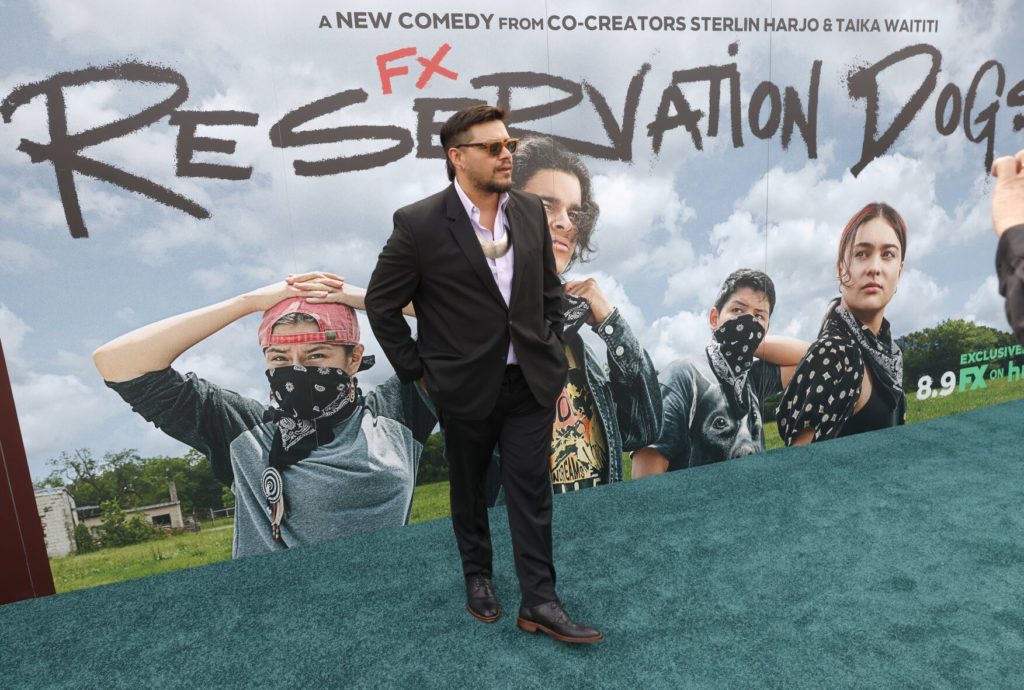 “Reservation Dogs” co-creator Sterlin Harjo at a screening for Season 1 of the show. Photo courtesy of Shane Brown/FX

In an interview with The New York Times, Harjo recalled that before “Reservation Dogs,” a show he was working on got the ax because a “well-known filmmaker” backed out — he did not believe there were enough Native actors to cast, Harjo said.

“Our communities are filled with amazing talented people,” Harjo told. “But we are the descendants of people who survived genocide, forced removal and displacement, so we don’t leave home as easily as others. We don’t just go to L.A. and say, ‘I’m going to be an actor.’ So you have to find those people.”

One of “Rez Dogs”’ actors came directly from the show’s inspirational source. Lane Factor, 16, is from Yukon, a suburb of Oklahoma City, and had never landed a serious acting role before but wanted to audition for the show’s first season to gain some experience. He said he nearly didn’t go for the interview, telling the Tulsa World that he wanted to stay home and play video games, but his mother insisted. 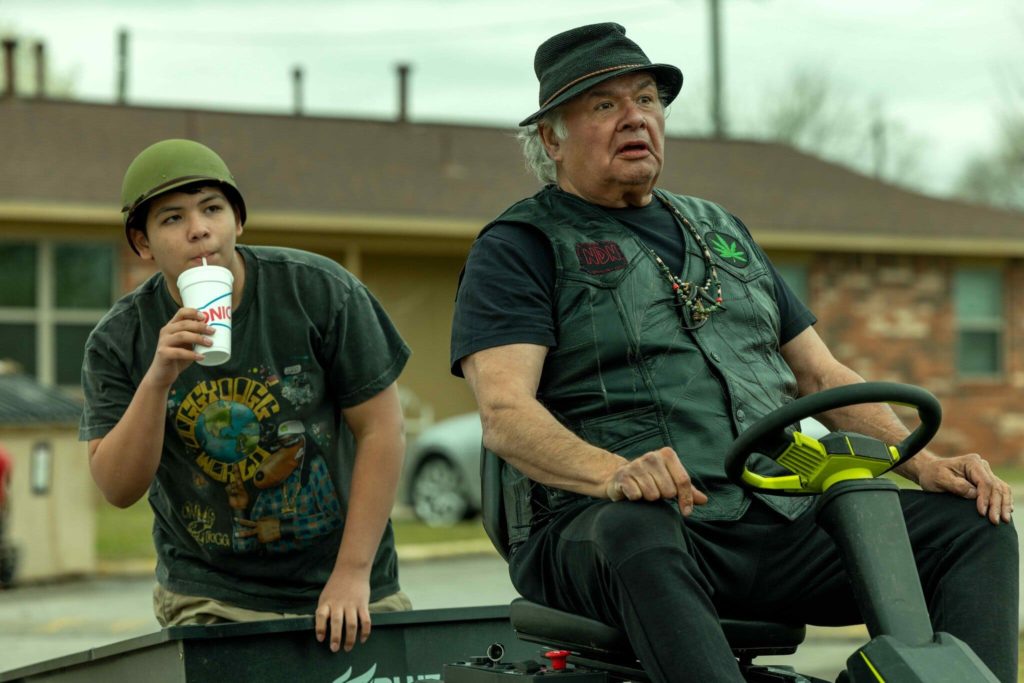 After the success of “Reservation Dogs,” Factor landed a supporting role in Steven Spielberg’s upcoming film, “The Fablemans,” which is described as a semi-autobiographical film about the famous director’s early life.

For Factor, it’s Season Two of “Reservation Dogs” that he’s most excited for people to see.

“I can’t wait to see what happens,” Factor told Tulsa World. “No one can really say what the future holds. Life is full of uncertainties, so who knows? But I’m really positive about the future.”

Perhaps an even bigger impact of Native-centric shows like “Reservation Dogs” and Peacock’s “Rutherford Falls” is the chance for Native storytellers to take charge of their own narrative, said comedian, actor and filmmaker Chad Charlie.

Charlie, an Afro-Indigenous filmmaker from Ahousaht First Nation, joined the cast and writer’s room for the new season, helping to co-write the third episode.

A criticism of Season 1 of “Reservation Dogs” was the lack of Black Natives in the show. Black Native American descendants have been fighting for recognition and enrollment in the Muscogee Nation after a 1979 constitution unenrolled ancestors of Black Native freedmen.

Charlie said people have asked him what he thought about the lack of representation of Black Indigenous people in Season 1, but Charlie, who is longtime friends with Harjo, said it didn’t bother him.

When he was hired to join the writer’s room, Charlie said he discussed including Black Natives into Season Two with Harjo.

“If there’s a lack of Black and Native representation then I’m glad to be the one to write it,” Charlie said. “We don’t want to do anything that’s pandering. We want to portray an authentic experience. There’s no sign on my back that says ‘Black Native.’”

Charlie said he believes “Rez Dogs” is the first of its kind when it comes to contemporary representation.

The series won a 2022 Peabody Award, as well as two Independent Spirit Awards, one of which was for Best Ensemble Cast in a New Scripted Series. It was also nominated for a Golden Globe.

Jacobs, who plays Elora Danan, earned a 2021 Gotham Award Nomination for Outstanding Performance in a New Series and has been cast in Marvel Studios’ upcoming Disney+ series “Echo” about a deaf Native American superhero.

For Revis, a member of the Yuchi Nation, she said it’s been a surreal feeling helping make “Reservation Dogs.” The 29-year-old grew up in the area of Oklahoma where the show was filmed, including going to school in Okmulgee, Oklahoma, the town where the majority of the first season was filmed.

She said the themes around the show dealing with loss, being poor and wanting to run away to California, all hit home for her and her experience.

She said she hopes kids will grow up on the reservation and watch this show and future projects and feel less isolated.

“Representation is so complicated because it’s needed, but it’s not like we are curing hunger,” she said. “But putting a point of reference into people’s minds about who we are and changing people’s unconscious biases. I can’t wait to see the effects.”