How to write a true crime tale, according to bestseller David Grann

David Grann’s true crime tale “Killers of the Flower Moon: The Osage Murders and the Birth of the FBI” is our second pick for the PBS NewsHour-New York Times book club, “Now Read This.” Become a member of the book club by joining our Facebook group, or by signing up for our newsletter. For an FAQ on how book club works, see here.

David Grann is an American journalist who knows a little something about digging up secrets. His first book, the 2009 nonfiction bestseller “The Lost City of Z,” recounts the exploits of British explorer Percy Fawcett — who disappeared after journeying into the Amazon — as well as Grann’s own journey to the Amazon to figure out how Fawcett died.

His 2017 book “Killers of the Flower Moon” also investigates a mystery, this time a string of sordid murders of wealthy members of the Osage Indian tribe in Oklahoma in the 1920s after oil was discovered on their land. The true-life murder mystery twists and turns as it tells the tale of how dozens were killed, how the newly-created FBI investigated the crimes, and how the murderers were able to get away with it for so long.

Below, Grann, who is a staff writer at the New Yorker, shares how he found this story, and how he writes — from his daily routine, to the book he thinks everyone should read, to the best piece of writer’s advice he ever received. Later this month, he’ll also share a photo essay and annotated page from “Killers of the Flower Moon.” Here are 5 questions with David Grann, in his words: 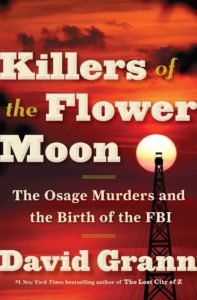 1.What is your daily writing routine?

After years of hoping there might be some mysterious secret of productivity to unlock, I’ve given up and realized that the only way to write is to sit down at the computer and stare at it. And so each day at around 9 a.m., after consuming several cups of black coffee, I tend to plop down at the computer. My goal is the same each day: write 500 words. I take a break for lunch, then return to my desk. Some days I may hit the 500-word mark before dinner and am free. But, alas, there are other times when I may be toiling away late into the night.

It’s impossible to pick one book without leaving out so many that are essential. But one book that I think is of critical importance to understanding American history is James M. McPherson’s “Battle Cry of Freedom,” his original, brilliant, and sweeping account of the Civil War. Everyone should read it.

Our attention tends to move so quickly that so many great books and shows get neglected. One author who deserves wider recognition is John Joseph Mathews, the prose-poet of the Osage Nation, who died in 1979. His books, including his 1934 semi-autobiographical novel, “Sundown,” capture what life was like on the Oklahoma prairie and the traumatic clash between white settlers and Native Americans. Not only was he an important writer—he was also an exquisite one.

William Faulkner probably put it best: “Read, read, read. Read everything — trash, classics, good and bad, and see how they do it. Just like a carpenter who works as an apprentice and studies the master. Read! You’ll absorb it. Then write. If it’s good, you’ll find out. If it’s not, throw it out of the window.” My own advice is a bit simpler: Just do it!

5.Can you describe the moment you knew you wanted to write this particular book? And when did you know it was over?

I knew that I wanted to — and, indeed, had to — write this book after I made a trip to the Osage Nation Museum, in Oklahoma, several years ago. When I was there, I came across a photograph on the wall, which was taken in 1914 and showed a seemingly innocent gathering of white settlers and members of the Osage Nation. But part of the picture had been cut out. When I asked the museum director why, she said that it contained the image of a figure so frightening that she had removed it. She then pointed to the missing panel and said, “the devil was standing right there.” The figure was one of the white settlers who had participated in the systematic killing of the Osage for their oil money. The Osage had removed the image not to forget what had happened, but because they can’t forget. And yet so many others, including myself, had no knowledge of one of the most sinister crimes and egregious racial injustices in American history. After that visit to the museum, I spent close to five years researching and writing the book, and I knew that it was done when I had exhausted all the trails of evidence.

Follow our coverage of Grann and “Killers of the Flower Moon” throughout the month here. You can also catch up on our January pick: Jesmyn Ward’s novel “Sing, Unburied, Sing.“