‘If the short story is a sprint, the novel is a marathon,’ and more writing advice from Lesley Nneka Arimah

Our August pick for the PBS NewsHour-New York Times book club, “Now Read This,” is Lesley Nneka Arimah’s short story collection “What It Means When A Man Falls From the Sky.” Become a member of the book club by joining our Facebook group, or by signing up to our newsletter. Learn more about the book club here and see all the previous book club selections here. 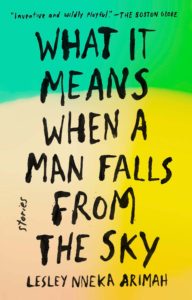 “What It Means When A Man Falls From The Sky.” Credit: Riverhead Books

“What It Means When A Man Falls From the Sky” is Nigerian-American writer Lesley Nneka Arimah’s debut short story collection. Since its release in April 2017, it has won the 2017 Kirkus Prize and the New York Public Library’s Young Lions Fiction Award. Nneka Arimah has been dubbed “a witty, oblique and mischievous storyteller” whose unsettling stories make you want to read and reread them again (The New York Times Book Review).

Nneka Arimah says the collection is the product of years of published stories, decades of voracious reading and a long “brewing” process for each story until it finally comes to a boil. Below, she shares her writing routine, the best writing advice she’s ever received, and the overlooked books she thinks are important to read now. In her words:

I imagine I’d get much more work done with a daily routine, but I’m very bad at (good) habits. Typically, when writing short stories, I’ll start with an idea or image or character that I turn over in my head–both consciously and, I suppose, subconsciously. I’ll plot it out, think about characters, worry at various knots and jot down lines or phrases whose wording I can’t risk to memory. I think of this as the “brewing” process. Eventually the story comes to a boil and I’ll write a draft that is somewhat polished for all the mindwork I’ve put it through, but putting it on paper allows me to see questions (aka opportunities) that I missed when the story was this nebulous thing in my mind. I also write stories more traditionally, unfolding the cloth of it paragraph by paragraph over weeks.

When it comes to routines, I’m a big fan of Whatever Gets the Book Done, whatever that might look like.

If the short story is a sprint, the novel is a marathon and the training required is completely different. My short story routine did not work for novel writing and so my routine has taken a different shape. I still like to do “mindwork” but you cannot hold an entire novel in your head the way you can a story and my routine has evolved to accommodate that, mostly by being more of an actual routine and less holistic. Currently, I start by reading most of the day (whittling away at my reading list) then I write in the evenings, the period that feels most natural to me (in the morning, I’m distracted by the possibilities for the rest of the day). It’s not a pure schedule. I am often overcome when reading and will pause to write, an “interruption” that may last 20 minutes or five hours. This is very different from my short story routine, further compounded by the fact that I wrote the collection when I was working in an office full-time whereas I’m penning the novel as a full-time writer. In general, when it comes to routines, I’m a big fan of Whatever Gets the Book Done, whatever that might look like.

I think that everyone should read Isabel Wilkerson’s “The Warmth of Other Suns.” When we talk about this country — the state of it, what needs to be done, etc — it often feels like an incomplete conversation, where some people have knowledge and others are working with assumptions. This heavily-researched, well-crafted book should be required reading as part of the national conversation.

As for my favorite childhood book, I was a big fan of Enid Blyton’s Mr. Pinkwhistle books from ages 6-10. I once thought to re-read them as an adult and see if they held up, but decided not to. I’m happy in this case to let nostalgia operate without my interference.

There’s a graphic series called “Bitch Planet” that takes on a social dystopia with an irreverent, satirical eye. In the world of the comic, women who are deemed “non-compliant” (be it in their looks, actions, sexual orientation, etc.) by the staunchly patriarchal government are imprisoned in a penal colony on the moon (the “bitch planet”) and it’s both horrifying and funny and very cheeky, which are hard things for any medium to carry off all at once.

4. What is the best piece of writing advice you’ve received?

“If you don’t do what you need to do to write this book, someone else will write it and you’re going to be pissed if they do it better than you, but even more so if it’s worse.”

“If you don’t do what you need to do to write this book, someone else will write it and you’re going to be pissed.”

It came at just the right time to light a fire under me as I had reached that do-or-die fork in the road some writers encounter where it has gotten easier and easier to push writing aside as the practicalities and challenges of adult life eat away at our time and energy. I was less affected by the thought of someone else writing “it” before me (there’s nothing new under the sun, etc.) but more so about the regret I would feel in seeing it was an achievable possibility that I’d failed to execute. Regret is a thing that tends to weigh heavily on me and I knew I couldn’t bear to live with the weight of this particular regret, of not writing the stories I knew I was meant to tell, whether the reason was my own lack of discipline or a lack of know-how or whatever else stood in the way. I took charge of things I could control (mostly myself and my choices), and did what it took to become the person who could write this.

I think I started writing this book long before I started writing this book. Growing up, I read constantly — I was once almost hit by a car at 14 because I read books while crossing the street and I used to slip novels into my bible at church. Books saved me when times were challenging and compounded my joy when times were good. And I read from every genre imaginable: literary, fantasy, science fiction, romance, westerns, biographies, the classics, etc. Only when I came to understand myself as a writer, years into my writing journey, did I see all the preparation for writing this book in that constant, varied reading. There are so many parts of this process that are clearer in hindsight.

As for “What It Means When a Man Falls from the Sky,” I did not know I had a book until six or seven stories in. Even when I realized I had the makings of a book, I could only conceive of the yet-to-be-written stories as independent entities. It was important to me that each story stood well alone and did not need to be propped up by the others. But these stories all come from the same mind with the same concerns and questions about the world, so a cohesive thread runs through them.

As for when I knew the book was finished, ha. I decided for reasons of numerology that I wanted 13 stories and as you can see, the collection has 12. There was a story that didn’t make it about a single woman in a world where women could not wear clothing unless it was provided by their husbands, meaning that this single woman had to live her life (work, shopping, etc.) naked. My editor and I passed that story back and forth and I swear I made it worse every time. I eventually realized that I was not yet the writer I needed to be to pull it off and so I took it out of the collection and, suddenly, the book was done and the rest is history. Happy ending: I eventually became the writer I needed to be to pull it off.

Left: Lesley Nneka Arimah, author of "What It Means When A Man Falls From The Sky." Credit: Emily Baxter