Located about 100 miles south of Memphis in the Mississippi River Delta, the birthplace of the blues, Mississippi State Prison in Parchman, Mississippi, has become as much a historical landmark as it is a penitentiary. It’s about 30 miles from where Emmett Till was murdered in 1955, and surrounded by uninhabitable swampland.

Parchman’s storied history is the basis for the prison farms featured in the movies “Cool Hand Luke” and “O Brother Where Art Thou?”, it’s referred to as “destination doom” in a William Faulkner’s novel “The Mansion,” and it is now a haunted setting in Jesmyn Ward’s National Book Award-winning 2017 novel “Sing, Unburied, Sing.”

Growing up on Mississippi’s southern coast, Ward said that Parchman loomed over her childhood. “When I thought about prison, that’s the prison that came to mind,” she said. “I didn’t know much about it, but I knew it was a place I never wanted to end up. And the danger that I would end up there was a real thing, for me and for people that I know and loved.”

Ward writes about two generations of prisoners at Parchman, including two young black inmates in the early part of the century and a white inmate, Michael, who’s just been released. “Pop,” a father and grandfather, and the ghost of a boy named “Richie” both remember a harsh, painful prison farm of the past. In the present-day of the novel, Michael’s character and Richie’s ghost says little has changed.

“Sometimes I think it done changed. And then I sleep and wake up, and it ain’t changed none,” Richie tells the young narrator, JoJo. “It’s like a snake that sheds its skin. The outside look different when the scales change, but the inside always the same.”

The Pride of Mississippi

The history of Mississippi State Penitentiary is a history of failed reforms. Its creation in 1901 was borne of a statewide shame and frustration at the contemporary system of convict leasing, writes David Oshinsky, historian and author of “Worse Than Slavery: Parchman Farm and the Ordeal of Jim Crow Justice.”

In the Reconstructionist south, states’ coffers were empty, prisons destroyed, and their former free labor supply was emancipated. Many southern states, including Mississippi, began arresting almost exclusively young, black men on charges ranging from laundering to larceny to murder. Some were legitimate, but many more were fabricated or embellished. The state began leasing the prisoners to wealthy contractors, who would further sublease them to companies.

“The convicts, under convict leasing, would do the kind of work that free labor would not want to do. In other words, the work a white worker might not want to do,” Oshinsky said. 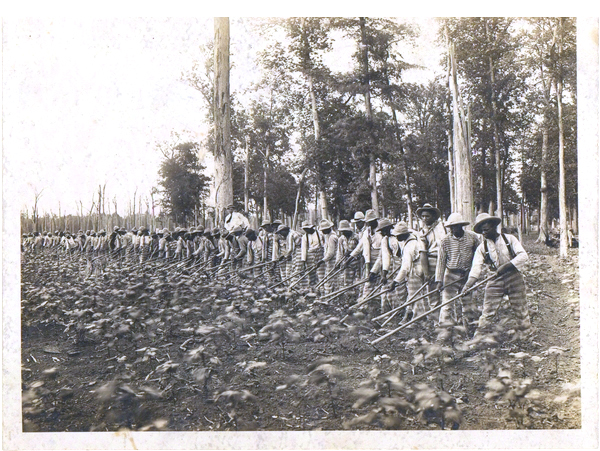 Prisoners at Parchman Penitentiary hoeing in a field in the early 20th century. Courtesy of the Archives and Records Services Division, Mississippi Department of Archives and History.

Under convict leasing, the inmates were essentially slaves again, Oshinsky said. They worked long hours for no pay, were poorly fed, and slept in tents at work sites doing dangerous jobs like dynamiting tunnels for railroad companies and clearing malarial-filled swamps for construction. Convicts, sometimes including children under age 10, were whipped and beaten, underfed, and rarely given medical treatment. Oshinksy writes that between 9 and 16 percent of convicts died yearly in the 1880s.

But poor whites began to resent the system that drove wages down for free workers. In 1904, Mississippi elected a new governor – James Kimble Vardaman – who aimed to reform the system, in part to benefit the lower-class whites. Parchman’s first year of operation was in 1905. It was massive, remote, and modeled after a traditional southern plantation.

Convicts worked six days a week, lived in barracks with no separation or classification by crime, and were often subject to punishment by a whip referred to as “Black Annie.”

Parchman was originally comprised of three separate farms: a small farm, which was maintained by white convicts, a smaller one farmed by women (mostly black), and a huge sprawling plantation for the prison’s black convicts. Over 20,000 acres and 46 miles, it was intended to be self-sufficient and profitable for the state, and it was.

Convicts, called gunmen, picked cotton under the watch of the most violent offenders, who were given guns and called trusty-shooters, or trusties, Oshinsky said. Hogjaw and Kinnie, the trusties Ward writes about in “Sing, Unburied, Sing,” were also real men; in 1947 Hogjaw was pardoned for killing an escaping convict. The farm was profitable; in 1918, Oshinsky wrote that the prison had a net revenue of $825,000, or about $800 per inmate.

In 1911, The New York Times ran a sprawling spread in the Sunday edition which heaped praise on the prison.

“The pride of Mississippi, however, is the ‘Parchman Place,’” the article read. “Actually instances have been known of when negroes were turned out of the penitentiary, given a new suit and $10 in money, they would not want to leave and would inquire if there was not some way by which they could stay there.”

But the reality, says Oshinksy, is that Parchman was nearly uninhabitable. Convicts worked six days a week, lived in barracks with no separation or classification by crime, and were often subject to punishment by a whip referred to as “Black Annie.”

Parchman Farm stayed this way, more or less, for the next 70 years. Cotton picking became mechanized and the state instituted some small reforms. A relatively impotent parole board deferred to the superintendent, Oshinksy writes, and small vocational and educational programs excluded black prisoners. A maximum security unit with a guard tower, fences, and gates housed individual cells, a gas chamber for executions, and a solitary confinement wing.

Otherwise, Parchman remained frozen in time, a segregated, harsh prison farm. It was during this period that it housed some of its most famous prisoners: Elvis Presley’s father Vernon was imprisoned in 1938 for “check forgery,” and blues singers Bukka White and Son House for dubious claims of violence. After his release, White composed his famous “Parchman Farm Blues,” which warned young men about the horror of the prison. 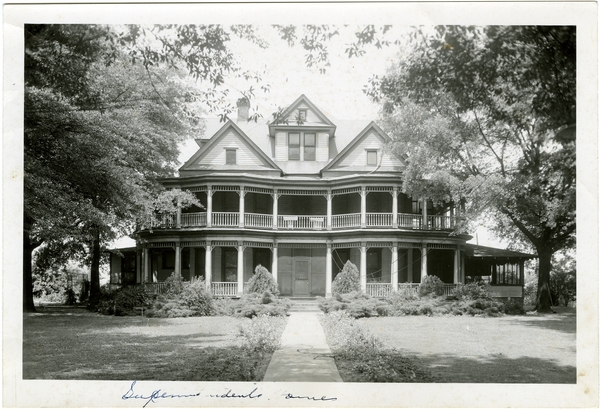 The Superintendent’s home in the early 20th century at Parchman Penitentiary. Courtesy of the Archives and Records Services Division, Mississippi Department of Archives and History.

Some of the Freedom Riders, a group of interracial young civil rights activists who boycotted Jim Crow laws, served time at Parchman, although they were segregated from the general population. Claude Liggins, 77, said the racism by the guards at Parchman was mostly directed at the white Freedom Riders. “They couldn’t understand why they would want to go against their own race and support us,” Liggins, who is black, said. “They had several white men who were beaten almost to death.”

In 1971, a civil rights lawyer named Roy Haber visited a convict at Parchman who was challenging his conviction. While there, Haber heard accounts from other inmates and personally witnessed the conditions, which he described as the last legal vestiges of slavery.

Almost a century earlier, the 13th amendment had abolished slavery in all cases except in penal servitude. “You can make somebody work if they’re a prisoner. Using that distinction, they were able to maintain a slave state within the prison,” Haber said.

Haber represented the inmates in a class action lawsuit against the prison in the now landmark case of Gates v. Collier. In 1971, the judge ruled in favor of the inmates, and throughout the next decade, he forced the prison to desegregate, eliminate “Black Annie” and other unconstitutional forms of punishment, and end the forced field labor.

You can make somebody work if they’re a prisoner. Using that distinction, they were able to maintain a slave state within the prison.

The state began to build facilities with real cells and walls, ended the trusty system, and hired professional, often black, guards and administrative staff. At last, it seemed like the prison might function as a rehabilitative facility instead of a slave plantation.

Fast forward closer to the present, and reform has not come easily to Mississippi State Penitentiary. Since Gates v. Collier, a number of lawsuits have brought attention and middling reforms to the prison, which is now about 67 percent black. according to the Mississippi Department of Corrections Monthly Fact Sheet. In 1999, Margaret Winter, at the time associate director of the National Prison Project at the ACLU, represented HIV positive inmates who were not receiving necessary antiviral HIV combination therapy. They alleged that they were segregated from the general population, were barred from holding jobs, and lived in squalor. They were re-integrated in 2001, and the ACLU later reported that conditions for them improved.

In 2002 and 2003, Winter and the ACLU pursued a series of cases on behalf of the death row inmates in the supermax unit, Unit 32. They alleged the conditions were inhumane and that the temperature reached 130 degrees Fahrenheit in some cells. Inmates described to the ACLU intense stench from sewage backups, extreme isolation, and lack of personal hygiene.

Ultimately, a years-long reevaluation of the classification system revealed that approximately 80 percent of the inmates who were determined “high risk” offenders and who were segregated from the general population in the hole were misclassified. Over four years, some 800 previously high-risk prisoners, who had wrongly been in supermax based on the violence of their crime rather than their behavior in prison, were reintegrated back into general population. Educational and rehabilitative programs were instituted. For the first time, the prison had mental health services.

At the time, Christopher Epps, commissioner of the Mississippi Department of Corrections, was leading the charge. He’d battled the ACLU through the various lawsuits and ultimately elected to spearhead the changes to the penal system. Before Unit 32 was shuttered, Epps instituted various education and life skills programs, and allowed exercise and made efforts to reduce solitary confinement at Parchman.

But in 2014, Epps was indicted on federal charges of bribery and kickbacks. In 2016, Epps was sentenced to just under 20 years in prison. In an ironic twist, he was held in solitary confinement in a Tennessee correctional facility. 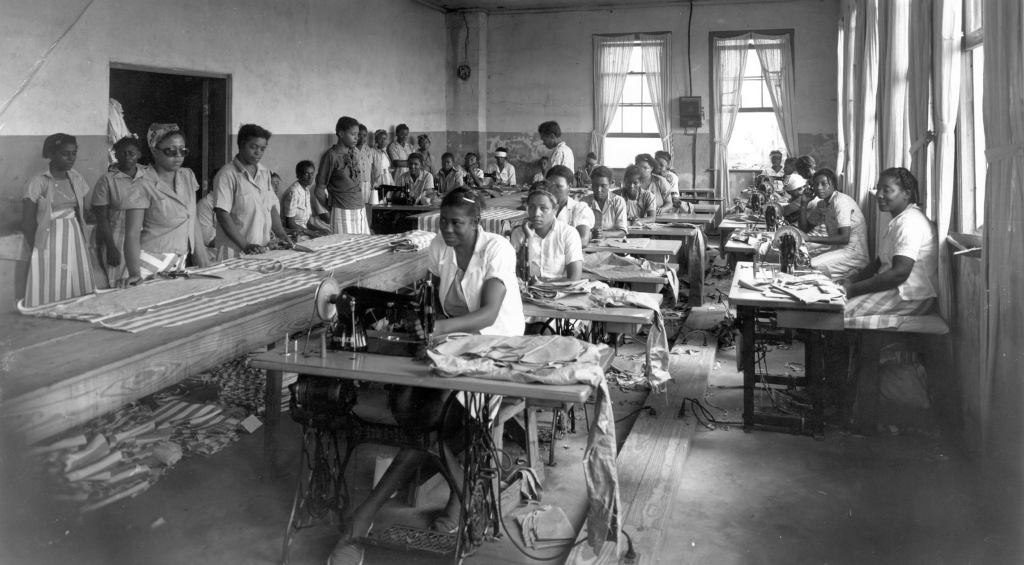 Female prisoners sewing at Parchman Penitentiary in the 1930s. Courtesy of the Archives and Records Services Division, Mississippi Department of Archives and History.

In today’s Parchman, prisoners complain of leaky roofs, broken windows and easy access to contraband. Anthony Sims, a prisoner at Parchman since 1988, when he was convicted of manslaughter, aggravated assault and burglary, says he knows of at least four men who died in his prison unit last year, all from overdoses of smuggled drugs. Five prisoners that the NewsHour spoke with, along with attorneys from the Southern Poverty Law Center, say there are few educational or rehabilitative programs.

The prison disputes this. Grace Fisher, communications director for the Mississippi Department of Corrections, said in an email that the agency has an onsite maintenance department that addresses infrastructure problems when presented. She also said the prison has “zero tolerance for any person – staff, inmate, visitor or vendor – who is instrumental in introducing contraband and that “all inmates have access to programs, based on classification status.”

In “Sing, Unburied, Sing,” Parchman’s historical presence was crucial to Ward. “Because that place casts such a large shadow in Mississippi and in my family, in my community I really wanted to write about it,” she said.

And she wanted to tell the prisoners’ stories.

“I realized that people just didn’t know that there was so much human suffering tied to that place,” Ward said. “I wanted it to seem real to people, and I wanted them to know so that the people who suffered in that place, and the people who live with the legacy of that place today, are not forgotten.”

Left: Male prisoners on the porch of a building at Parchman Penitentiary. Courtesy of the Archives and Records Services Division, Mississippi Department of Archives and History.