Batiste won five Grammys Sunday including album of the year for “We Are” pulling off an upset in a loaded category filled with tough competition from Rodrigo, Billie Eilish, Taylor Swift and the combined talents of Tony Bennett and Lady Gaga. After his win, the multi-genre performer honored the artists he beat, telling the audience that “the creative arts are subjective. Be you.”

“I just put my head down and I work on the craft every day,” said Batiste, who won for his song “Cry,” the video for “Freedom” and his work with the Trent Reznor and Atticus Ross on the soundtrack for “Soul.”

Silk Sonic — the all-star union of Bruno Mars and Anderson .Paak — took home awards in all four categories it was nominated in, including record and song of the year. Both were exuberant as they accepted the honor toward the end of the ceremony. 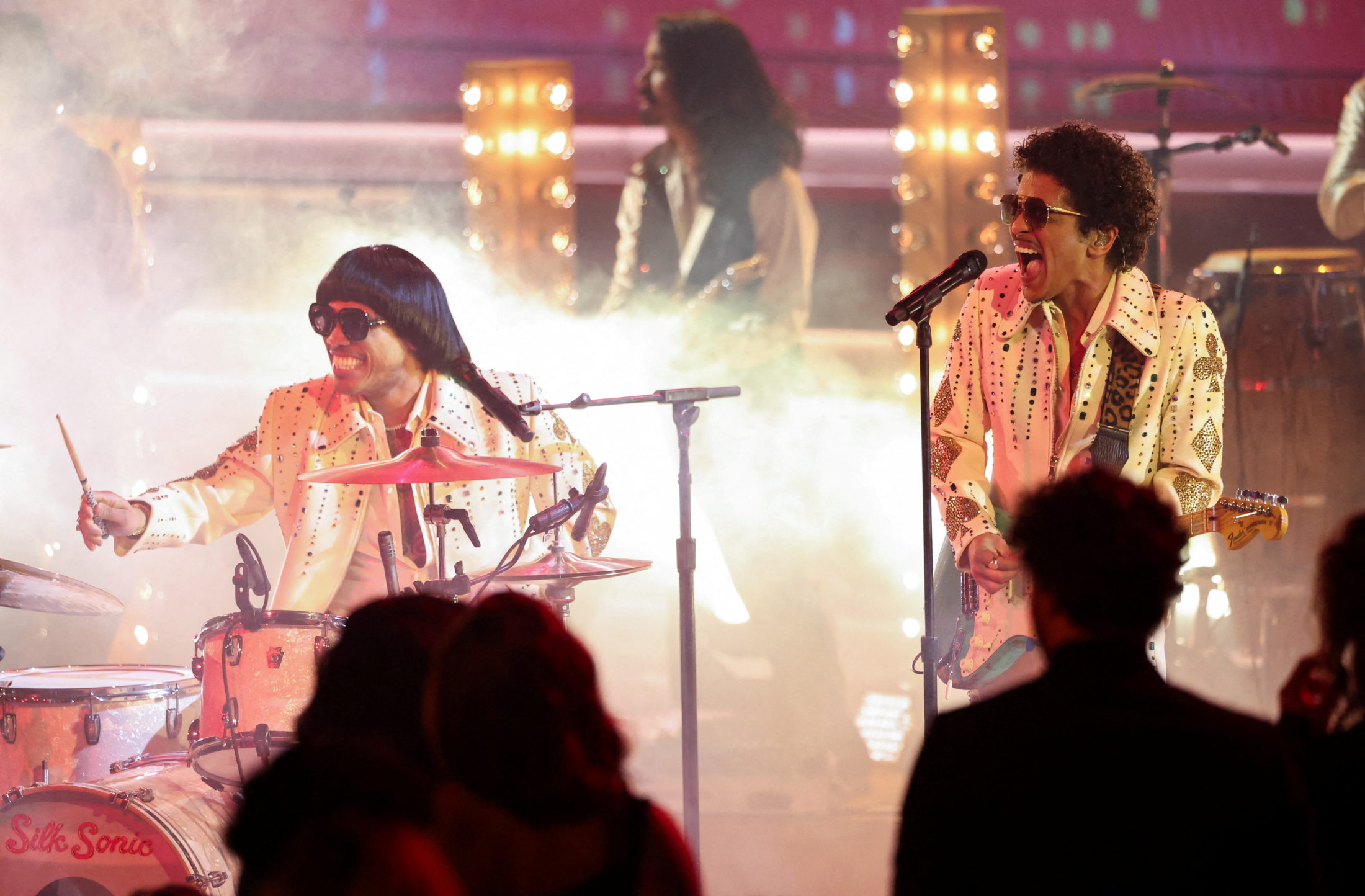 The wins in both major categories put Mars on the brink of history: He became the only artist along with Paul Simon to take win record of the year three times. He tied the record for most song of the year wins with two.

“We are really trying our hardest to remain humble at this point,” .Paak said. “But in the industry, they call that a clean sweep!” later adding “drinks is on Silk Sonic tonight!”

A veteran of the “High School Musical” series, she became the breakout music star of 2021, leading with her massive viral hit “Drivers License” and following with the single “Good 4 U” and the aching album “Sour,” which took best pop vocal album.

“This is my biggest dream come true,” she said after her best new artist win. She thanked her parents for supporting her dreams, which at one point involved being an Olympic gymnast and quickly veered toward music. 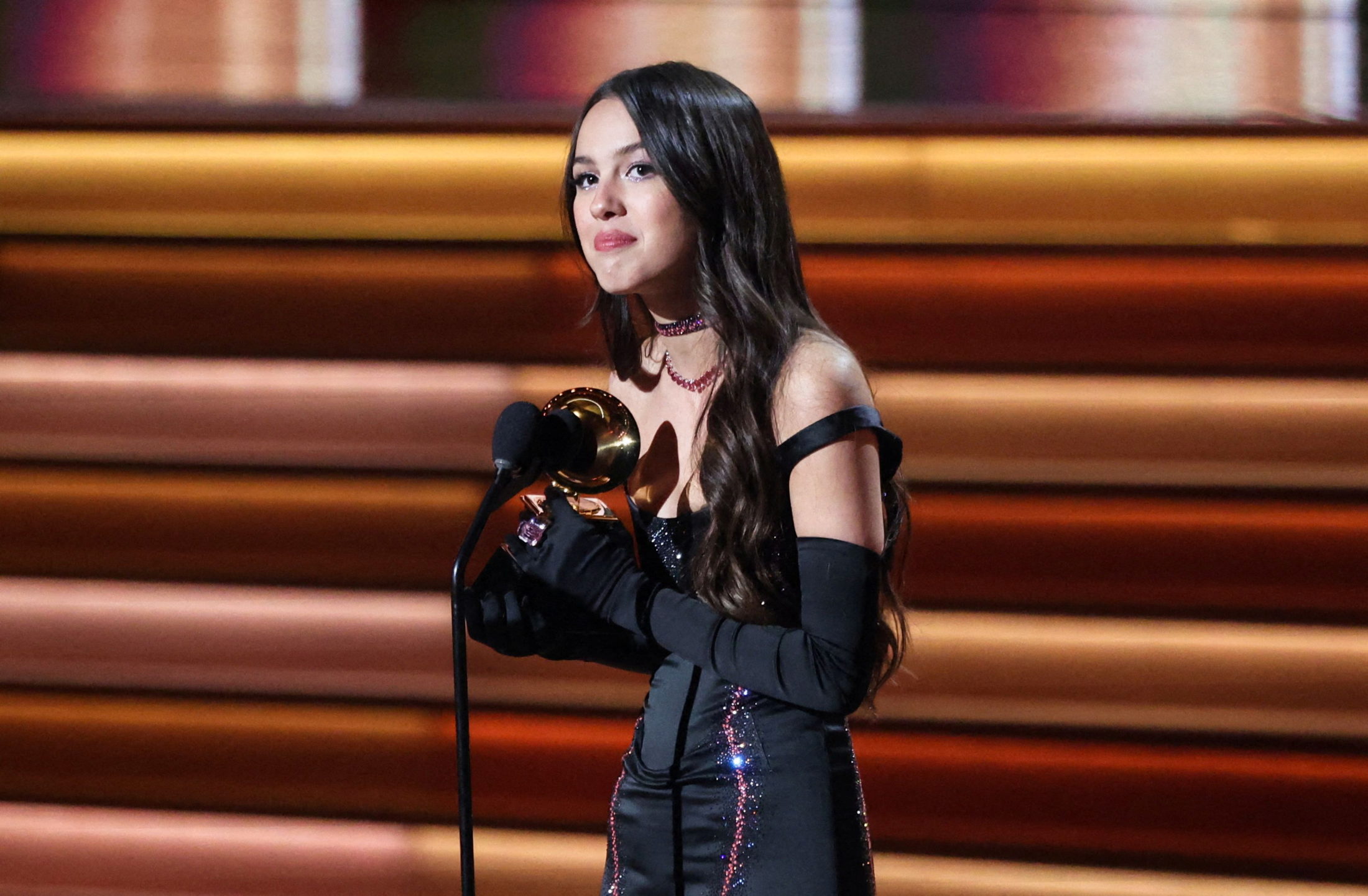 The win came after the night’s festivities briefly grew somber when Ukrainian President Volodymyr Zelenskyy addressed the gathering with an update on the war and numbers including children injured and killed. “Our musicians wear body armor instead of tuxedos,” he said. “We are fighting Russia, which brings horrible silence with its bombs. The dead silence. Fill the silence with your music.”

He ended by saying: “Tell the truth about the war on your social networks, on TV. Support us in any way you can, but not silence. And then peace will come to all our cities.” 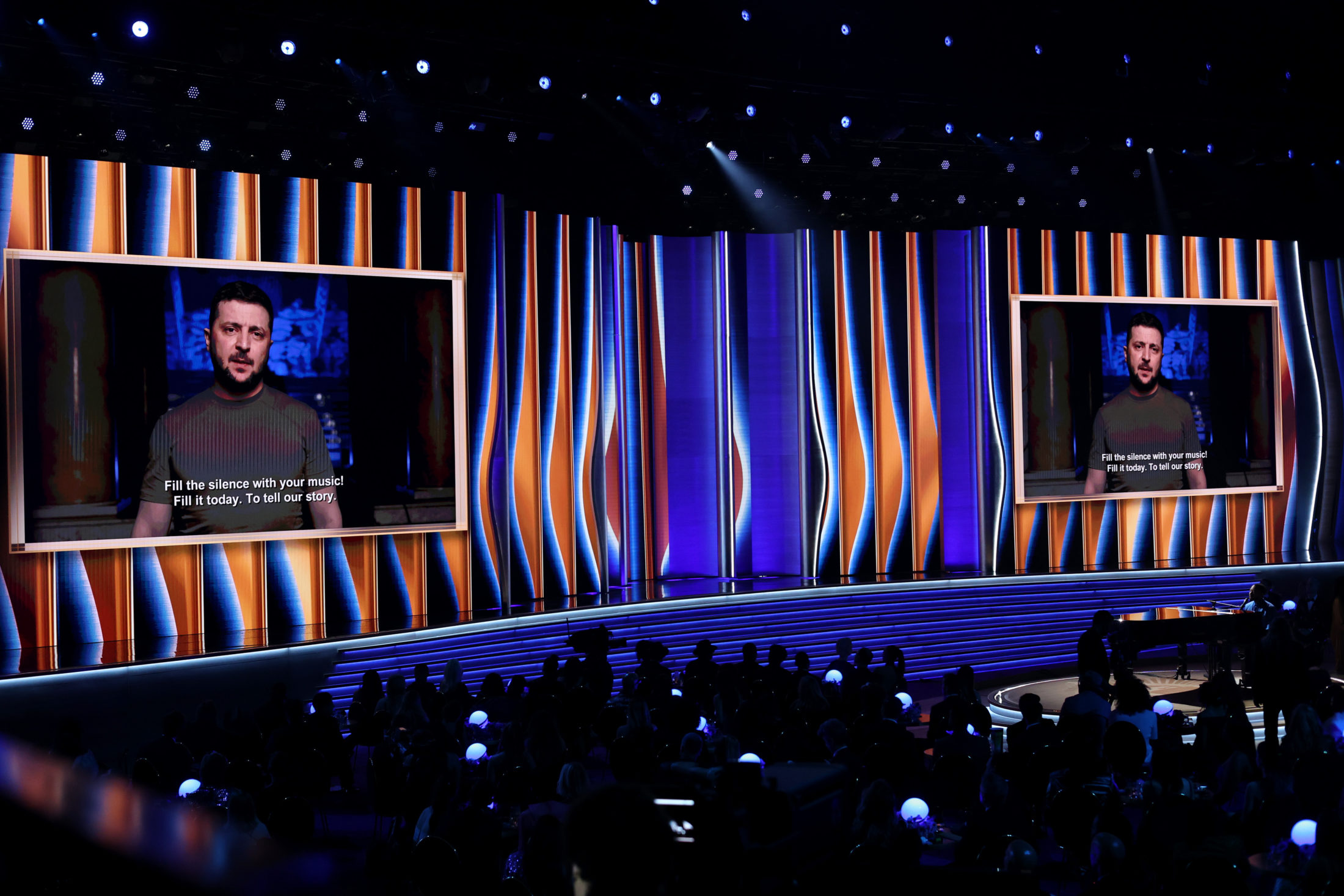 Silk Sonic opened the ceremony in Las Vegas with their high-energy, infectious mix of retro soul and funk by performing their “777.” They returned to the stage a short time later to collect the song of the year trophy for “Leave the Door Open.”

Both Mars and .Paak jumped out their seat, threw up their hands and danced to their song.

“We’ll be singing this song together for the rest of our lives,” Mars said to .Paak

Host Trevor Noah introduced the duo’s opening performance by saying they were singlehandedly bringing back the 1970s, “which might explain the inflation.”

Doja Cat and SZA gave an emotional speech after winning best pop duo-group performance for “Kiss Me More.” Cat told SZA that she’s “everything to me” and the “epitome of talent” as she tried to hold back tears.

“This is a big deal,” Cat said after she darted to the podium after using the bathroom. SZA beat her by a few seconds despite climbing onstage on crutches with the help of Lady Gaga. 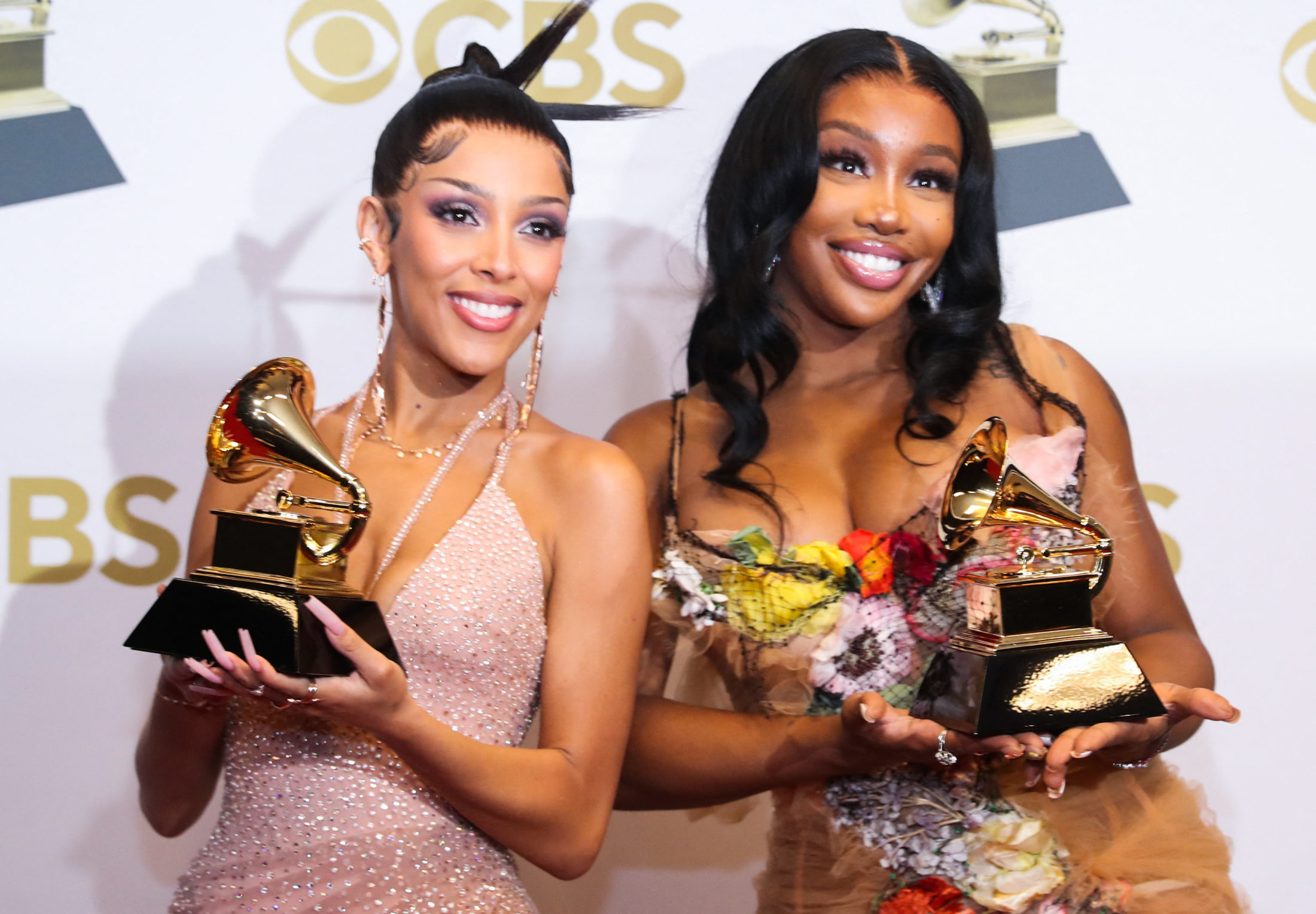 Doja Cat and SZA pose with their Grammys for Best Pop Duo Group Performance for “Kiss Me More” at the 64th Annual Grammy Awards at the MGM Grand Garden Arena in Las Vegas. Photo by Steve Marcus/Reuters

“I feel like me and SZA are similar in the way that we both grew up with spiritual backgrounds,” she continued. “But she was perfect for this song.”

It was a family affair from cousins Baby Keem and Kendrick Lamar, who won best rap performance for their song “Family Ties.” Lamar won his 14th Grammy and the first for Keem, who said “nothing could have prepared me for this moment” after stepping out onstage to claim his trophy.

By the time the show started on CBS, Batiste had already taken home four Grammy Awards, including his first ever, during a pre-telecast ceremony.

“I am so grateful for the gifts that God has given me and the ability to share that for the love of humankind,” Batiste said after collecting his music video award for “Freedom.” “We just wanted everyone to see it. Any depression, any bondage or any darkness that was over your life is completely removed by just the love and the joy of the video.”

Chris Stapleton won his third Grammy for best country solo performance for “You Should Probably Leave.” 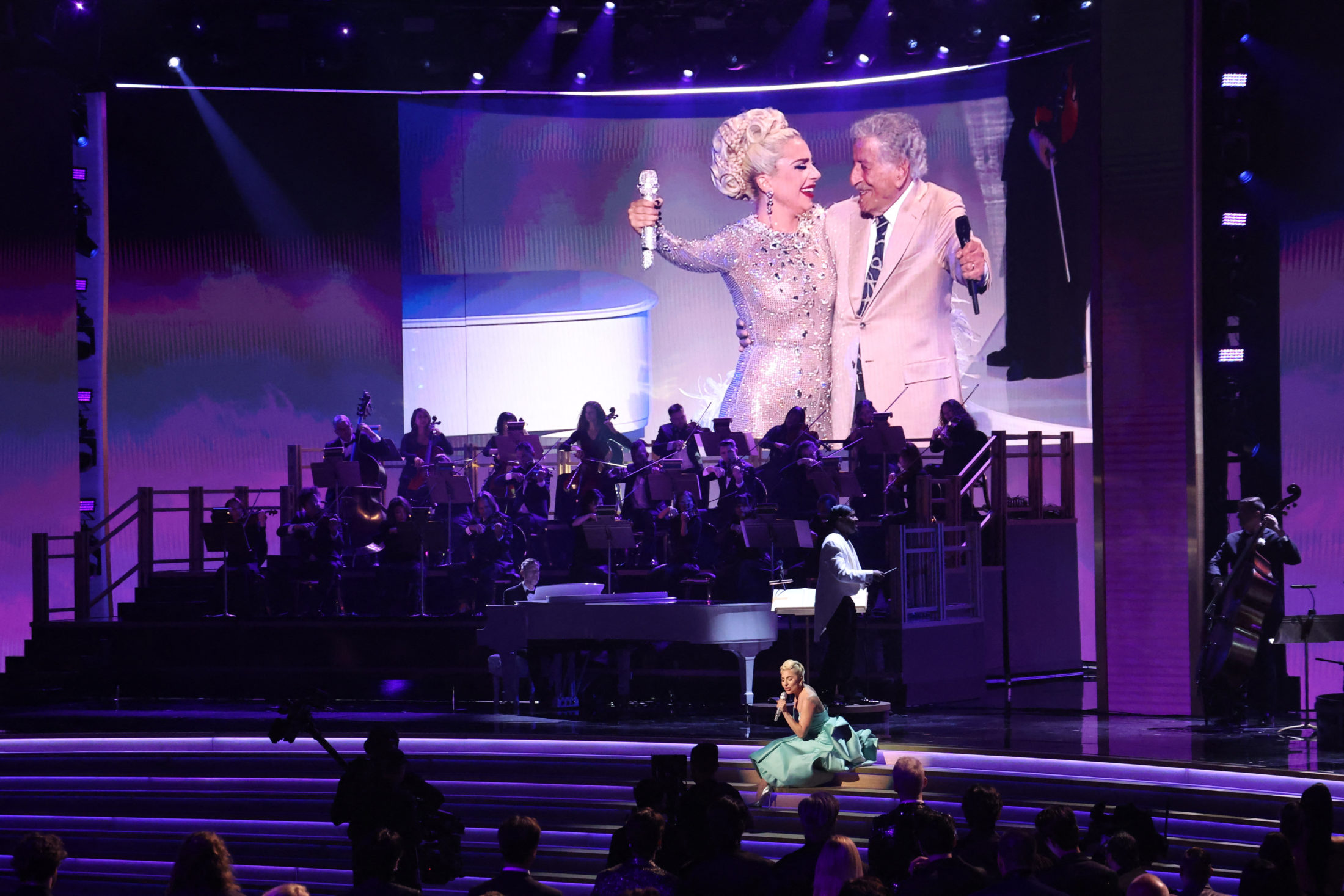 Lady Gaga performs the song “Do I Love You” from her album “Love for Sale” with Tony Bennett as an image of the two singers performing together is displayed above her during the 64th Annual Grammy Awards show in Las Vegas. Photo by Mario Anzuoni/Reuters

Tony Bennett extended his record as the artist with the most traditional pop vocal album honors with 14 wins with “Love for Sale,” a duet album with Lady Gaga.

Dressed in all black, BTS took the stage with a flirty moment between V and Rodrigo before the group performed their hit single “Butter.” They made an appearance after one of the members tested positive for COVID-19. All seven of the members – Jin, Jimin, V, RM, J-Hope, Suga and Jungkook – acted as if they were secret agents dodging neon-blue lasers, dancing with smooth choreography before going into a brief rap portion of the song.

Foo Fighters won three awards Sunday, but were not in attendance to pick up their trophies following the recent death of drummer Taylor Hawkins. An extended tribute to Hawkins played before the show’s In Memoriam segment honoring artists and music industry figures who’ve died.

Eilish paid homage to Hawkins during her performance by sporting a black T-shirt with his image. She stepped onstage in an upside-down house along with her brother Finneas before walking into a downpour to perform the title track from her “Happier Than Ever.” 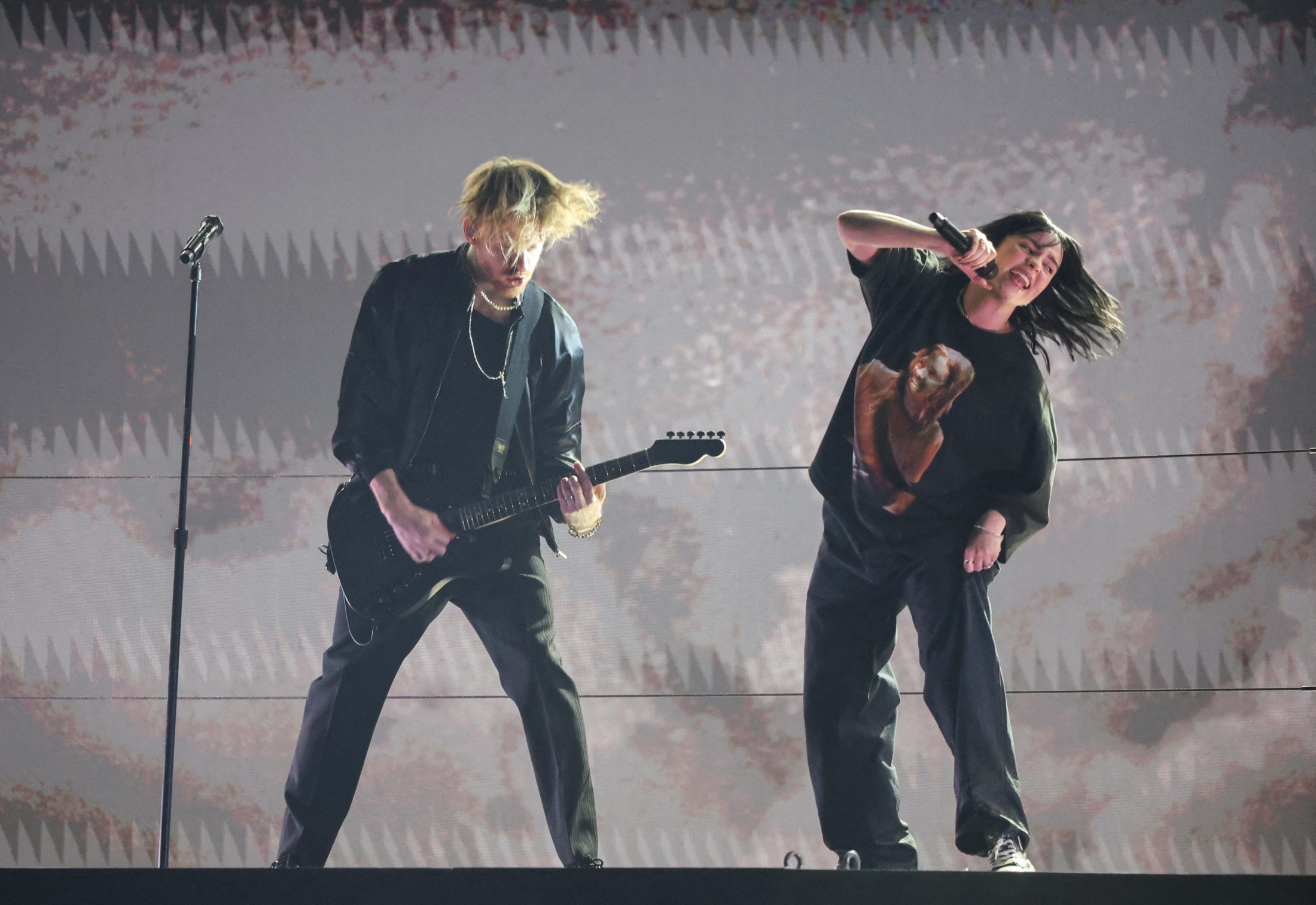 Billie Eilish performs the song “Happier Than Ever” with Finneas O’Connell during the 64th Annual Grammy Awards show in Las Vegas. Photo by Mario Anzuoni/Reuters

TJ Osborne, who came out as gay last year, fought back tears as he and his brother accepted a Grammy during the pre-telecast show for the Brothers Osborne song “Younger Me.” He noted the song was inspired by his coming out.

“I never thought that I would be able to do music professionally because of my sexuality. And I certainly never thought I would be here on the stage accepting a Grammy after having done something I felt like was going to be life changing and potentially in a very negative way,” Osborne said.

“And here I am tonight, not only accepting this Grammy Award with my brother, which I love so much, but I’m here with a man that I love and he loves me back” he said. “I don’t know what I did to be so lucky.”

The ceremony shifted in January from Los Angeles to Las Vegas because of rising COVID-19 cases and the omicron variant, with organizers citing “too many risks.”

Left: Jon Batiste poses with their Grammys for Best American Roots Performance for "Cry," Album of the year for “We Are,” Best American roots song, Best music video and Best score soundtrack for visual media for “Soul," at the 64th Annual Grammy Awards in Las Vegas. Photo by Steve Marcus/Reuters