“When I wanted a guitar, my mother said, ‘Oh, no, no. You’ll buy it and you’ll just quit. You’re a quitter’ … I went and plunked down the thirty-six dollars, bought this ukelele, and just hunkered over it everywhere to the point where my friends said to me, ‘Anderson, if you don’t put that goddamn thing down, I’m gonna break it in half,’” she told music writer David Yaffe.

“Reckless Daughter: A Portrait of Joni Mitchell,” Yaffe’s new biography of Mitchell, came out last month, giving insight into the personal journey of a musical legend. The book follows Mitchell from her childhood through her growth into a musician who some fellow artists describe as the best singer-songwriter of her generation.

Yaffe spoke with the NewsHour Weekend about the origin of Mitchell’s songwriting technique and the stories behind several of her better-known songs. Here are some parts that may surprise you — and for more, watch the full segment tonight.

Having polio as a child influenced her signature sound.

Mitchell contracted polio at the age of 10 as the disease swept across Canada in the early 1950s. She eventually regained health, but the disease weakened her left hand. When she began learning to play string instruments, “She couldn’t do some of the simple left-handed things on the frets, because of the weakness in her left hand,” Yaffe told the NewsHour Weekend.

To make up for it, she used dozens of open tunings, in which the strings of an instrument are tuned to a full chord, making it easier to play other chords. Open tunings would become a key part of her sound over the course of her career. “To compensate for [her left hand], she had this strength and dexterity in her right hand,” he said. “She would compose by creating new tunings.”

She missed Woodstock — which inspired her to write.

As rock and folk musicians from around the country headed to Woodstock in August of 1969, Mitchell stayed behind. She was scheduled to perform on The Dick Cavett Show the day after the festival ended and, nervous that her return home would be delayed, her agent David Geffen asked her not to go. Bitterly disappointed, she followed the legendary festival from afar and wrote the song “Woodstock,” a song that held tremendous emotional weight for her. “The lyrics are not really a celebration, especially when you hear the way she sings it. It’s a dirge,” Yaffe said.

The first few times she performed it, she “burst into tears, because it brought back the intensity of the experience and was so moving,” she told Yaffe.

Crosby, Stills and Nash formed in her living room.

When Mitchell moved to the Laurel Canyon neighborhood of Los Angeles in the 1960s, she joined a community that has been mythologized as the source of some of pop and folk’s biggest hits. One day, fellow musicians David Crosby and Stephen Stills were playing the song “You Don’t Have to Cry” in Mitchell’s living room when Graham Nash joined in their singing — a lightning-rod moment for the trio. “Crosby, Stills and Nash actually first harmonized in her living room,” Yaffe said.

“Joni was originally a Dylan detractor. She thought he was just a Woody Guthrie imitator. She didn’t see what the big deal was at first,” Yaffe said. But when she heard “Positively 4th Street,” she changed her mind, he said. Hearing the song — especially the line “You’ve got a lotta nerve to say you are my friend” — was exciting and represented a new world of possibilities for personal, intimate lyrics. “When she heard that, she thought, ‘Oh my God, now we can write about anything,’” Yaffe said. 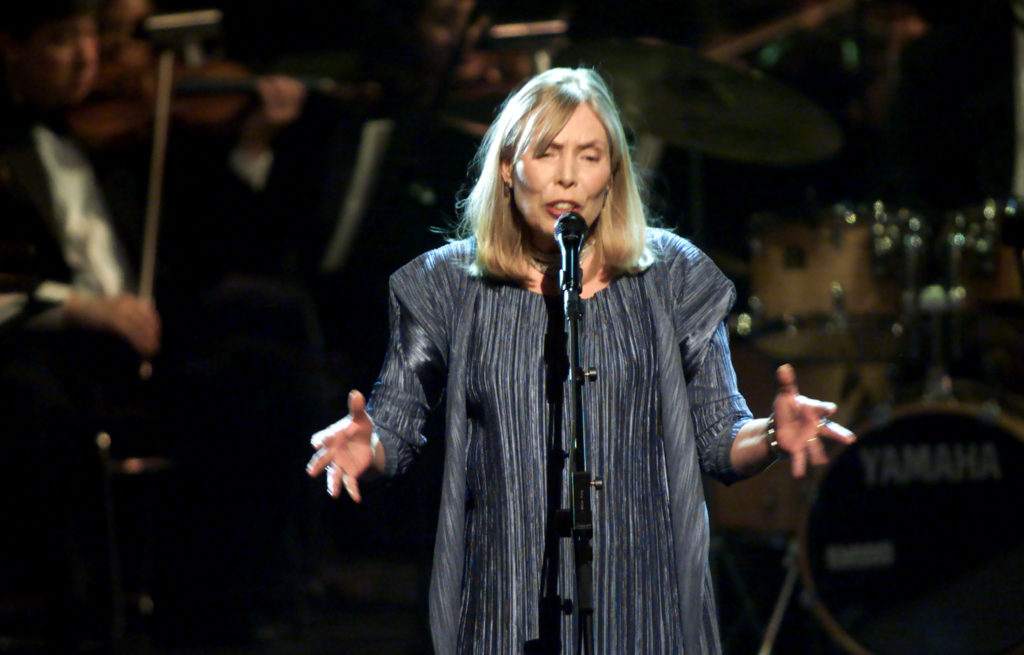 Joni Mitchell sings one of her songs, “Both Sides Now,” during the filming of a television tribute to her in New York on April 6, 2000. Photo via Reuters

One of her hit songs was written as a joke.

Joni Mitchell “never tried to write a hit,” with one exception: “You Turn Me on I’m a Radio,” which was written as a joke for Geffen after he asked her to write a hit. But the song reached #13 on the Billboard Adult Contemporary Tracks chart in 1973, spending 10 weeks on the chart in total. “It was a joke of a hit,” Yaffe said.

Phil Hirschkorn contributed reporting. This article has been updated to correct the name of Graham Nash.