Katie Kitamura annotates a page from her book ‘A Separation’

Our November pick for the PBS NewsHour-New York Times book club, “Now Read This,” is Katie Kitamura’s psychological thriller “A Separation.” Become a member of the book club by joining our Facebook group, or by signing up to our newsletter. Learn more about the book club here. And submit your questions for Kitamura here. 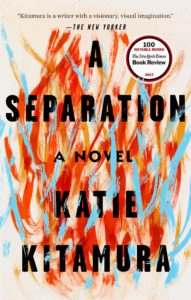 “It had been an unhappy expedition,” Katie Kitamura writes early on in her psychological thriller “A Separation,” about a woman who goes to look for her missing, estranged husband in Greece. “By that point, the cracks in our marriage were beginning to show… I remember sitting in the theater in a state of numbed contemplation.”

This particular scene is from an unpleasant evening the female narrator spent at the opera with her husband and his parents, but that numbed contemplation continues for much of the book, as she tries to make sense of where her marriage and other things went wrong.

In the pages Kitamura annotates below, she explains how her fascinations with masculinity and privacy in a marriage became major themes in the book, as well as the significance behind certain references.

Click on the yellow text to see the annotations.

My phone was ringing. I reached inside my pocket. It was Isabella, she had impeccable timing. I answered, a little short, but she didn’t notice, she didn’t bother to say hello before she asked where Christopher was and if she could speak to him.

I could hear a recording of Britten’s Billy Budd playing in the background. Isabella and Mark were opera fanatics and had once taken us to see a production of this particular opera at Glyndebourne. It had been an unhappy expedition. By that point, the cracks in our marriage were beginning to show. Christopher and I were barely on speaking terms, but Isabella and Mark were blithely, almost aggressively unaware of the tension between us. There was something single-minded about their interest in opera, and never more so than on that evening.

I remember sitting in the theater in a state of numbed contemplation—of the music, the awkwardness of the situation, I was not a fan of Britten, which did nothing to endear me to Christopher’s parents. Now, as I heard the familiar strains of music, I thought how integral distance was to the story, which takes place almost entirely at sea. Without that distance, even the basic mechanics of the plot would be impossible— no threat of mutiny, no reliance on martial law, no death of Billy Budd. If I did not care for the opera—the music was too dense, like staring at a stone wall—the story was still compelling, it offered the opportunity to peer into the world of men, in a different time, when men went away, to war or to sea.

Now, they no longer went away—there was not, at least for most of them, a sea to roam or a desert to cross, there was nothing but the floors of an office tower, the morning commute, a familiar and monotonous landscape, in which life became something secondhand, not something a man could own for himself. It was only on the shores of infidelity that they achieved a little privacy, a little inner life, it was only in the domain of their faithlessness that they became, once again, strangers to their wives, capable of anything.