After a year that brought Lin-Manuel Miranda universal acclaim for his creation of the musical “Hamilton” the Broadway sensation and star of the production recently turned his attention to young students in New York City.

Miranda, with support from the The Rockefeller Foundation and the Gilder Lehrman Institute for American History, have launched an educational partnership that will provide 20,000 New York City public school students the chance to view “Hamilton” at the Richard Rodgers Theatre.

In a recent interview with the PBS NewsHour, Miranda discussed the reasons behind the initiative that began on April 13.

Editor’s note: This transcript has been condensed and edited for clarity.

LIN-MANUEL MIRANDA, HAMILTON ACTOR: It feeds us, quite frankly. One­­ this is a show about the making of this country. And I see it as an entry point­­ in terms of beginning the story -­­ we don’t begin to tell the exhaustive history of how this country is formed. We tell it­­ by telling the story of one guy, Alexander Hamilton, and as much as we can fit in two hours and 45 minutes.

It’s­­ really exciting to see their pieces. They’re writing from the perspectives of other people­­, of other stories that have been overlooked — in our show and overlooked in history. And­­ it’s the beginning of their curiosity in the subject. 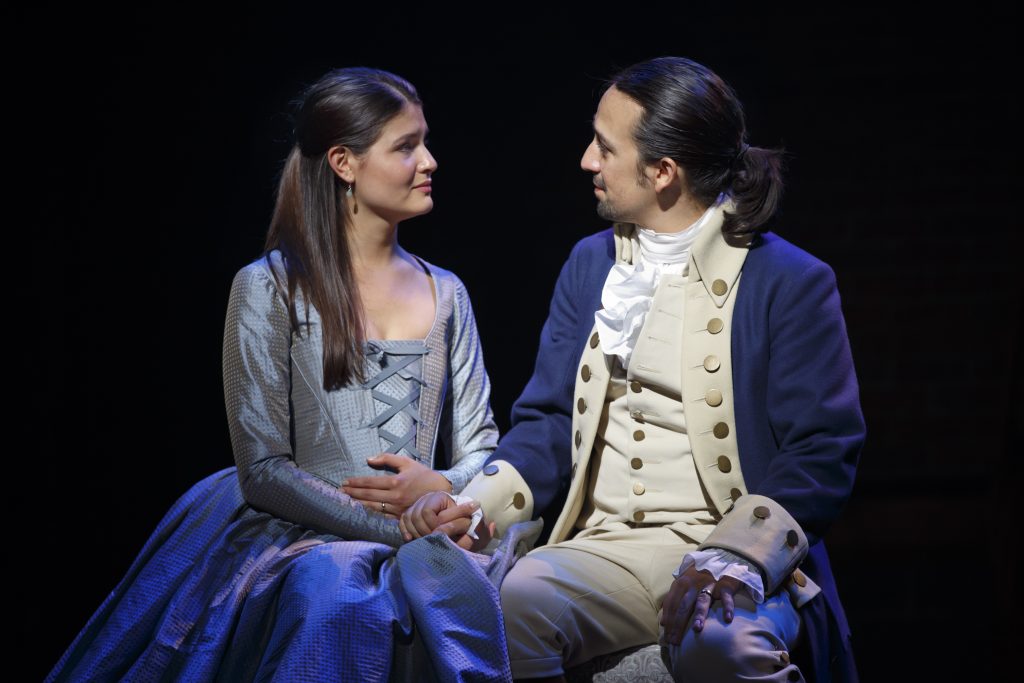 SASKIA DE MELKER: What about Hamilton’s story told in this form do you think resonates with students?

LIN-MANUEL MIRANDA: For me, hip-­hop music was the most natural form to tell Alexander Hamilton’s story because he was so prolific. He wrote so much.  ­identified with him as a writer who wrote his way out of poverty in the Caribbean. Wrote his way into Washington’s good graces. Wrote his way into beats with other founding fathers­­ and defended the creation of our country­­ through the Federalist Papers.

So it’s a natural form. It’s just a natural musical form for the story we’re telling. You’re always trying to find the right form and the right means of telling a particular story. And­­ I think that my other side mission is always to erase the line between musical theater and other genres of music. Musical theater’s always been­­ an art form that incorporates other styles.

Musical storytelling­­ has no limits. And so I like throwing every genre I have it. And I think that’s also part of why it’s connecting.

SASKIA DE MELKER: What do you hope that these students learn from going through the curriculum and then from seeing your show?

LIN-MANUEL MIRANDA: I think­­ what I’m most excited for is the thing they’re gonna write. You know, I saw Rent when I was 17 years old. I was very lucky I got a ticket for my 17th birthday. I sat in the last row of the Nederlander Theatre, and I’d never seen a show that took place in the present.

That doesn’t sound like a big deal, but it was for me. I thought musicals were this thing other people had access to. It had to be about Paris. It had to take place in London. It had to be, you know, some far-off time and some far-­off place. These were artists in the village, living and dying. And I knew I wanted to be an artist. And so it gave me permission.

Not every student who comes to see the show is gonna have a life in the theater. But they are gonna have to reckon with how much Hamilton got done in his life. And that is going to spark a little bit of, “Well, what am I gonna do with my life?” So even if this is not the path, I think it’s something that forces them to reckon with what the path’s gonna be. 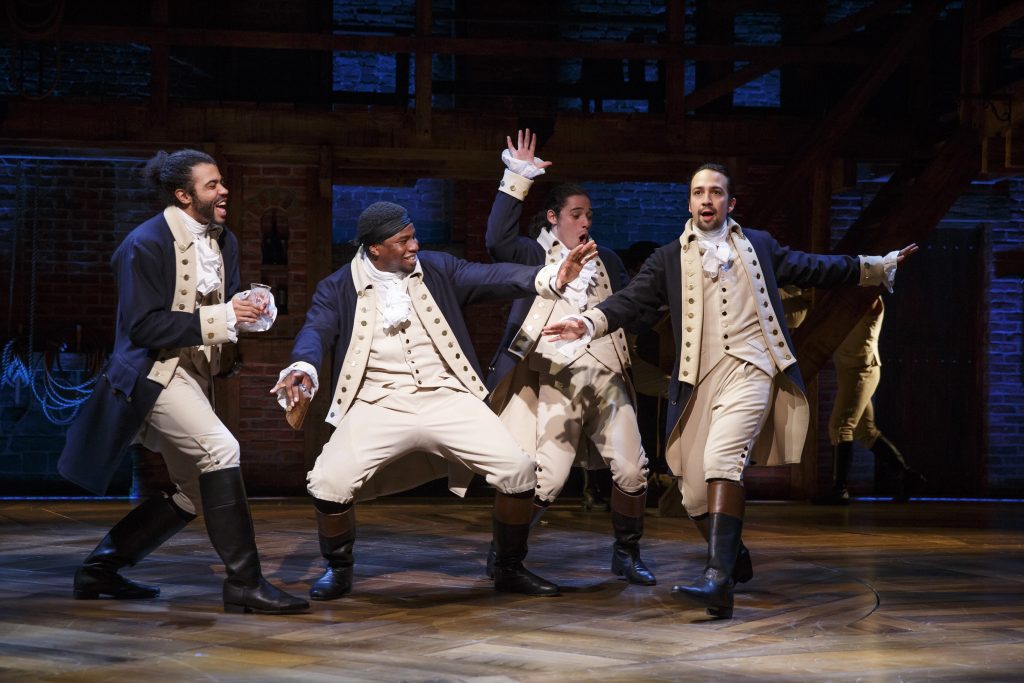 “When you’re at your best with a teacher, you’re barely talking at all,” Miranda recently told the PBS NewsHour. Photo By Joan Marcus

SASKIA DE MELKER: You worked as a teacher for a while. How did your experience as a teacher influence how you see Hamilton being used in the classroom?

LIN-MANUEL MIRANDA: It’s really profound what I learned when I was teaching, I taught seventh-grade English. And it’s actually the opposite of being a performer. When you’re being a performer, you’re commanding the stage and you’re holding attention. You are holding forth.

When you’re at your best with a teacher, you’re barely talking at all. You’re putting what’s on the table, what we’re gonna discuss. And the real moments of connection happen when they learn from each other. I’ve learned all of my best teaching experiences when I was sitting in the back and I was just keeping the ball in the air for the students to discuss.

And they were finding the connections in whatever we were reading or whatever we were learning about. And this curriculum works in a similar way. It’s not about, “Here are the facts of Hamilton, the musical. Put them in your brain.” It’s, “This is one story. What are more stories? What are more stories from this time, from this era? Maybe stories that haven’t been heard yet. How do you find your way into that? What do you relate to?”

It forces you to engage personally with something that could just be a bunch of facts you learn for an A.P. test. And in doing that, you create empathy. In doing that, you create­­ an ability to engage with history in a way that’s more than memorization. It’s, “These were people who lived and died. And they were flawed.” And our country’s flawed because they were flawed. Because we’re all figuring it out. And­­ there’s­­ there’s lessons to be learned there. 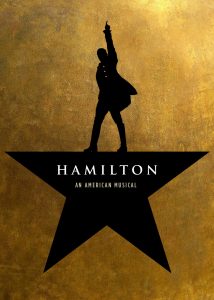 SASKIA DE MELKER: You know, we spent some time with some of the students that have been preparing to come to the show. They’re super excited. They say they are just excited to be heard and have a voice. How much of this is about students who maybe don’t always get that chance to be put out there and be heard?

LIN-MANUEL MIRANDA: It’s everything. It’s­­ to be able to­­ create something. You know, ­I’m probably here standing talking to you because I wrote­­ project for my eighth-grade English project for Dr. Herbert. Dr. Herbert saw what I wrote and said, “You should be writing plays instead of just goofing off in the back of my class.”

You know, that ability to be heard, ­­whether it’s in a classroom or it’s on a stage, it’s so important. When you’re at this age, you are feeling more than you will ever feel again in your life. The hormones are literally coursing through you at a lethal rate. There is so much going on inside. That­­ runoff –­­ that creativity — It’s important to harness it and find­­ outlets for it­­ that­­ that are constructive and lighten your load.

For a Broadway show to be one of those outlets­­ is really inspiring.

Left: Writer and star of the Tony Award nominated "Hamilton" Lin-Manuel Miranda points to his nominee pin as he arrives for the 2016 Tony Awards Meet The Nominees Press Reception in Manhattan, New York, U.S., May 4, 2016. Photo by Andrew Kelly/Reuters