Madrid on quest to find the remains of ‘Don Quixote’ author

He has been hailed as the father of the novel, a writer who wielded the Spanish language so forcefully that it is nicknamed for him: la lengua de Cervantes (“the language of Cervantes”).

But when Miguel de Cervantes died nearly four hundred years ago, he was penniless, and his burial took place, like much of his life, in obscurity.

Although a small plaque on the side of the Convent of Trinitarians in Madrid marks the “Don Quixote” author’s final resting place, the precise location of his gravesite is unknown. The coffin containing his remains was lost during construction work years ago.

This is set to change on Monday, when a team of historians and anthropologists will use radars to map the subsurface of the church’s floor, hoping to find, and appropriately commemorate, the Spanish writer’s remains by the end of next year. 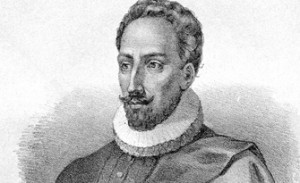 Francisco Etxeberria, a forensic anthropologist involved in the search, does not think identifying the remains will be difficult. Cervantes was distinctive looking, a self-described toothless hunchback who lost use of his left arm while serving as a soldier during a war against the Ottoman Turks.

The convent is located in a neighborhood known for its literary prominence, leaving some to question why no effort has been expended to find Cervantes until now.

Alfonso de Ceballos-Escalera, a publisher and historian, cited a culturally Catholic idea that “what is important after a burial is the spirit and not the body and the physical remains.”

But Fernando de Prado, a historian who has been lobbying the Spanish government to fund this search for at least four years, said he thinks there is no “better moment than now” to commence the project. 2015 and 2016 will mark the fourth centenary of the publication of “Don Quixote” and Cervantes’ death, respectively.

Left: A plaque on the Trinitarias convent marks Miguel de Cervantes’ final resting place, but the precise whereabouts of his remains are unknown. Photo by Flickr user Pablo Sanchez