The women in Alexander McQueen’s runway shows were often equipped for war. A model ensconced in jet black feathers became a harbinger of death. Others marched the catwalk in plaster body casts, football gear or corsets molded to look like a human spine and rib cage. McQueen’s clothes doubled as armor.

“I want to empower women. I want people to be afraid of the women I dress,” the fashion visionary once said.

No one was going to approach the woman with the maw of a crocodile head jutting from her right shoulder — at least not easily.

Five years since his suicide in 2010, McQueen, known to his friends as “Lee,” has been the subject of two biographies this year, and an art exhibition called “Savage Beauty” that originally opened in New York in 2011 and, more recently, in London. 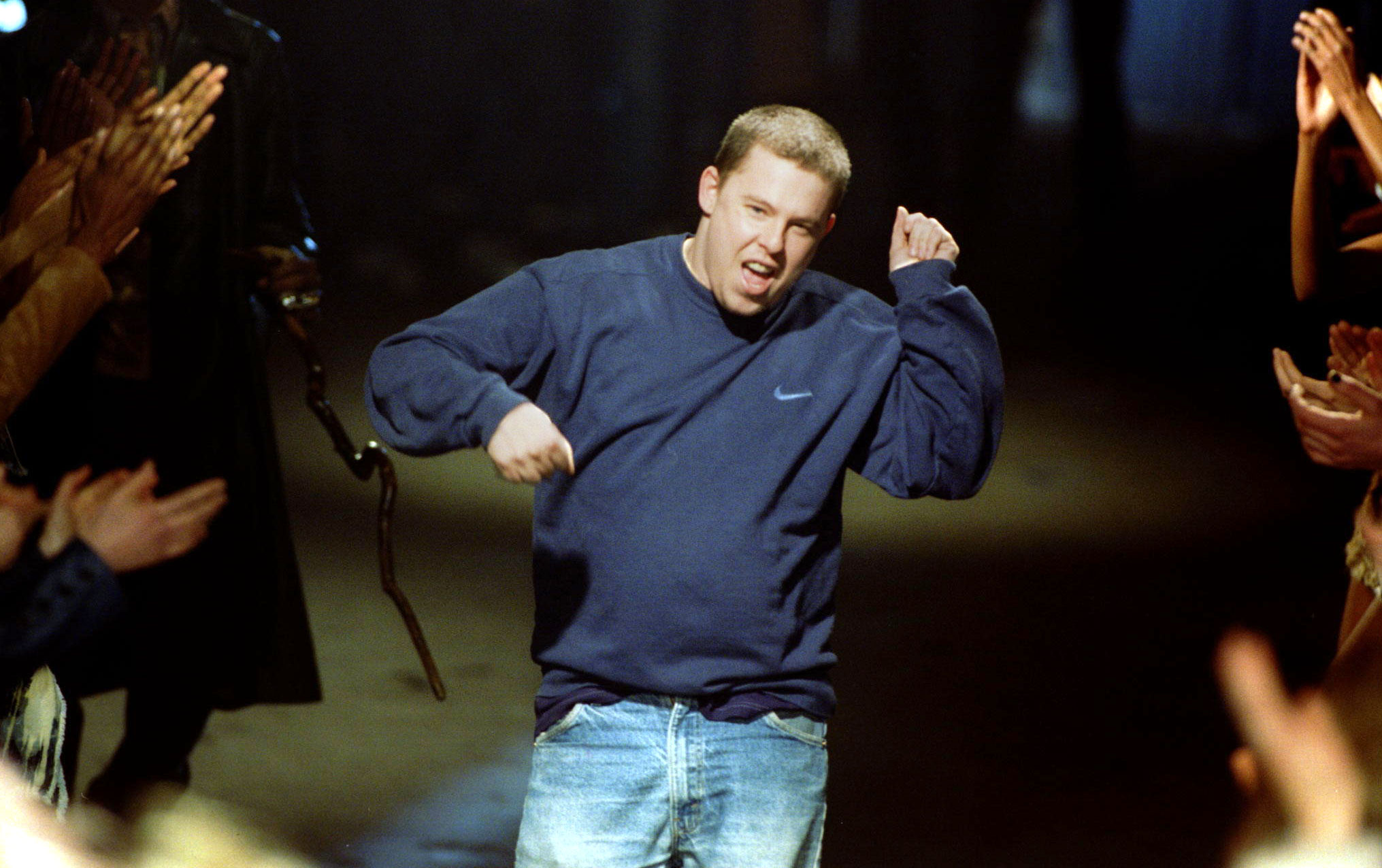 British fashion designer Alexander McQueen dances down the cat-walk to the applause of his models and audience after his show during London Fashion Week in 1998. Photo by Paul Hackett/Reuters

As the design house McQueen built seeks to double in size, creative director Sarah Burton, who took over the reins when McQueen died, told The New York Times Style Magazine last year that the company — and the work — had to move on. The McQueen woman that graces the runway these days carefully steps away from the personal demons that fueled Lee’s light-absorbing imagination.

With the release of the full-length biography, “Alexander McQueen: Blood Beneath the Skin” this week, we spoke with the book’s author, The Cut’s Véronique Hyland and fashion bloggers Tom Fitzgerald and Lorenzo Marquez, better known as Tom & Lorenzo, on how the designer challenged the industry he reveled in. 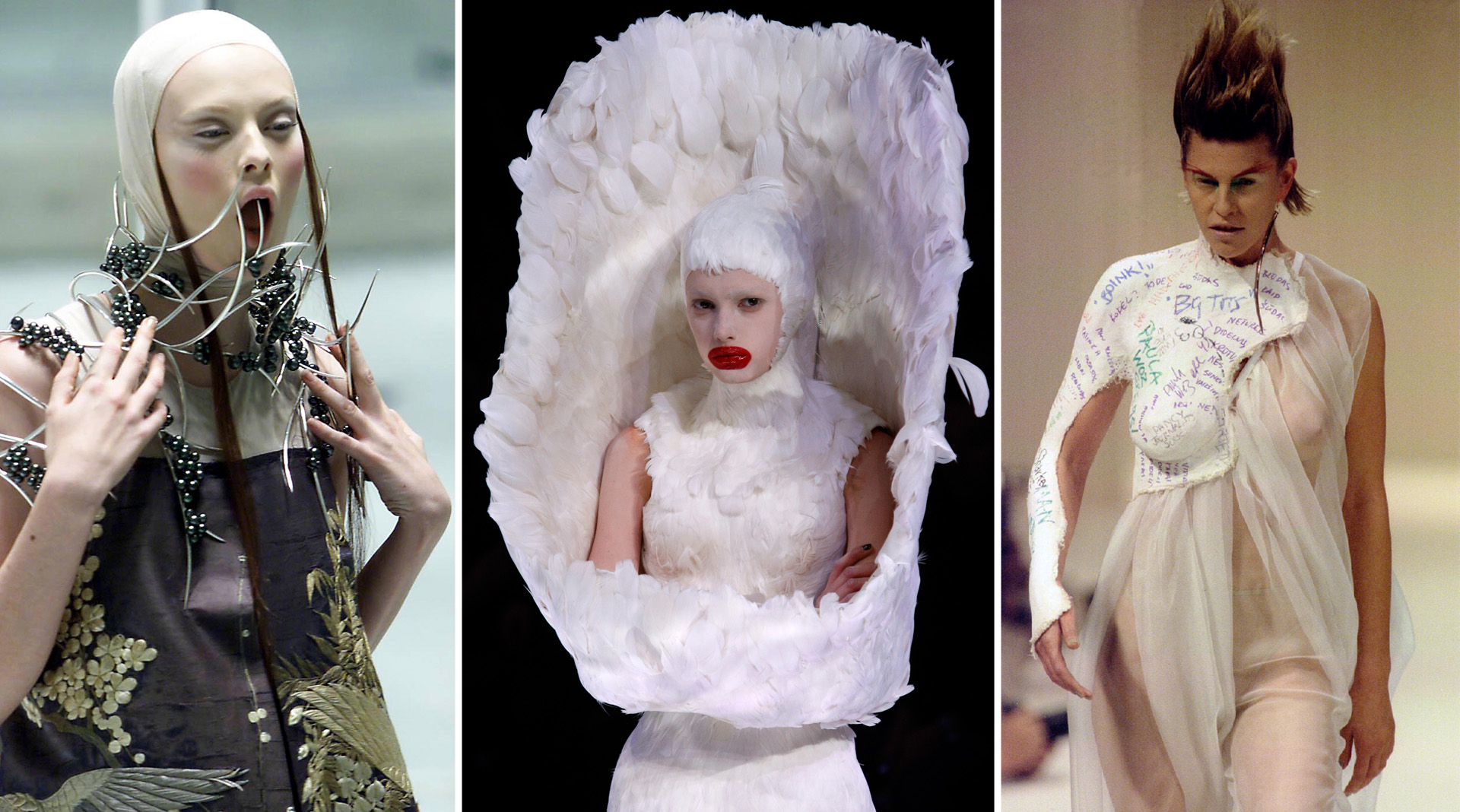 Photos by Pascal Rossignol and Kieran Doherty and Reuters

In the 1960s, Alfred Hitchcock’s blonde heroines exuded a fashionable sophistication on the silver screen, so much that film versions of Kim Novak or Grace Kelly have longed inspired designers to update the prim pencil skirts, leather gloves and long dresses for the modern runway.

But only McQueen could look at 1963’s “The Birds” and come out with a series of garments with tire marks.

“I thought: ‘Birds, road, car tire, splat!’” McQueen is quoted as saying by Simon Ungless, a longtime friend who designed the tire print, in Dana Thomas’ biography “Gods and Kings.”

The spring 1995 collection, named after the film, also featured models wearing opaque white contacts and dresses covered in bird silhouettes. It would appear his muse wasn’t necessarily Tippi Hedren, the iconic Hitchcockian heroine in “The Birds,” it was the chaos of a town terrorized by the winged creatures.

“He took ugliness as a starting point, instead of beauty,” Hyland said. He wasn’t a designer that wanted to be pretty, she said.

McQueen’s models, who have been caged, bloodied, or as in “The Birds” collection, actual roadkill, also welcomed accusations of misogyny, a portrayal critics of the designer continued to debate after his death at the age of 40.

“When you’re basically there to write about clothes, what are you to make of models tottering along the catwalk in ripped dresses, looking like blood-stained rape victims?” Joan Smith said in the Independent, shortly after McQueen’s death. She added that his shows were a display of “supposedly ‘ludic’ misogyny.”

Wilson said in McQueen’s imagination, he wanted to create garments and dresses and suits that would actually protect women, a kind of armor that would inspire fear in the spectator. 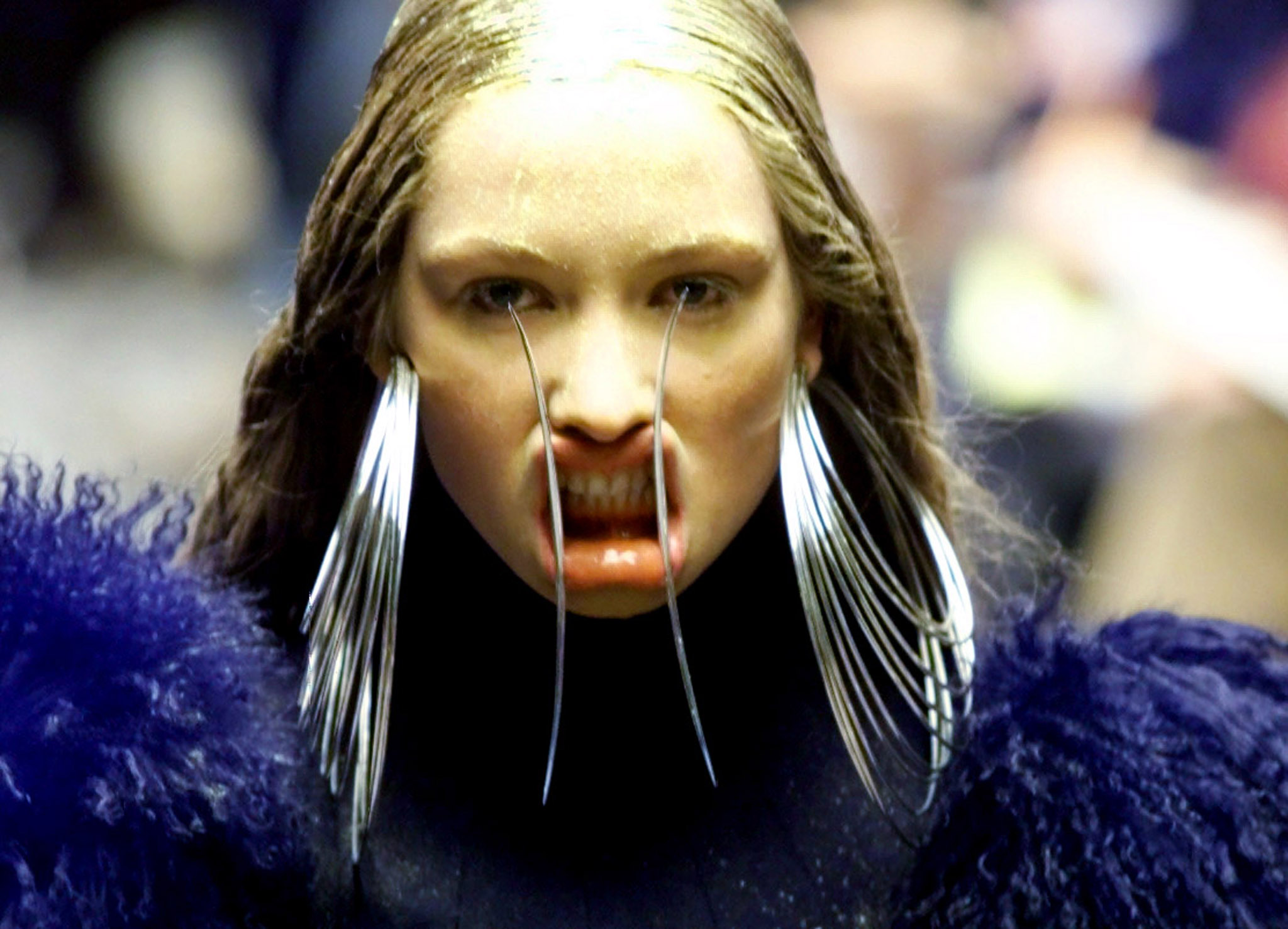 A model displays a creation by designer Alexander McQueen during London Fashion Week in February 2000. Photo by Reuters photographer

“He gave women an extra layer of confidence and security,” Wilson said. “When he was alive, the McQueen brand was like stepping into a kind of fantasy world. A mad doctor operating on women and creating clothing for them.”

Wilson, as recounted in “Blood Beneath the Skin,” said the designer’s obsession with darkness possibly stemmed from an instance of sexual abuse as a boy by his brother-in-law. He also said he witnessed the same man beat his older sister Janet.

Tom & Lorenzo, who recently created a podcast on this question of misogyny, said it seemed McQueen was working through his demons and poured that into his designs.

Fitzgerald said because of the medium, he was literally using women as the canvass. 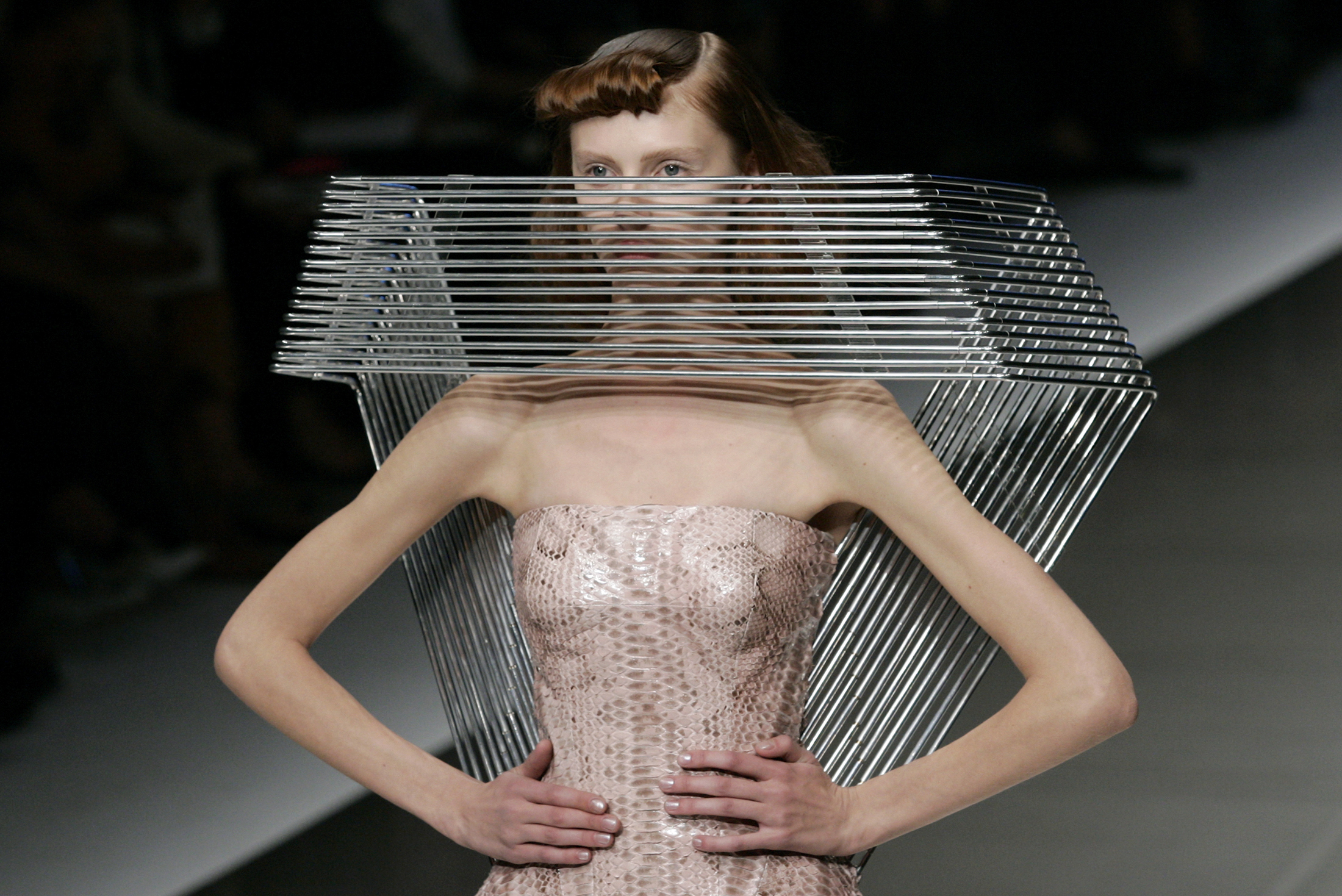 A model presents a creation by British designer Alexander McQueen as part of his 2008 ready-to-wear fashion collection in Paris on Oct. 5, 2007. Photo by Benoit Tessier/Reuters

The grotesqueries that were implied on his models were meant to provoke and, on some level, make you angry, Fitzgerald said in the podcast.

“He really was trying to do his version of empowerment,” Fitzgerald said. And “he sought empowerment through transformation of the body.”

The transformations involved turning models into birds of paradise, gazelles and the undead. Even when the inspiration was Chucky, the killer doll from the 1988 horror film “Child’s Play,” the result was a runway finale of unapproachable models with scary clown make-up.

And scary clowns are not usually the victims in horror films.

He transformed the human body. 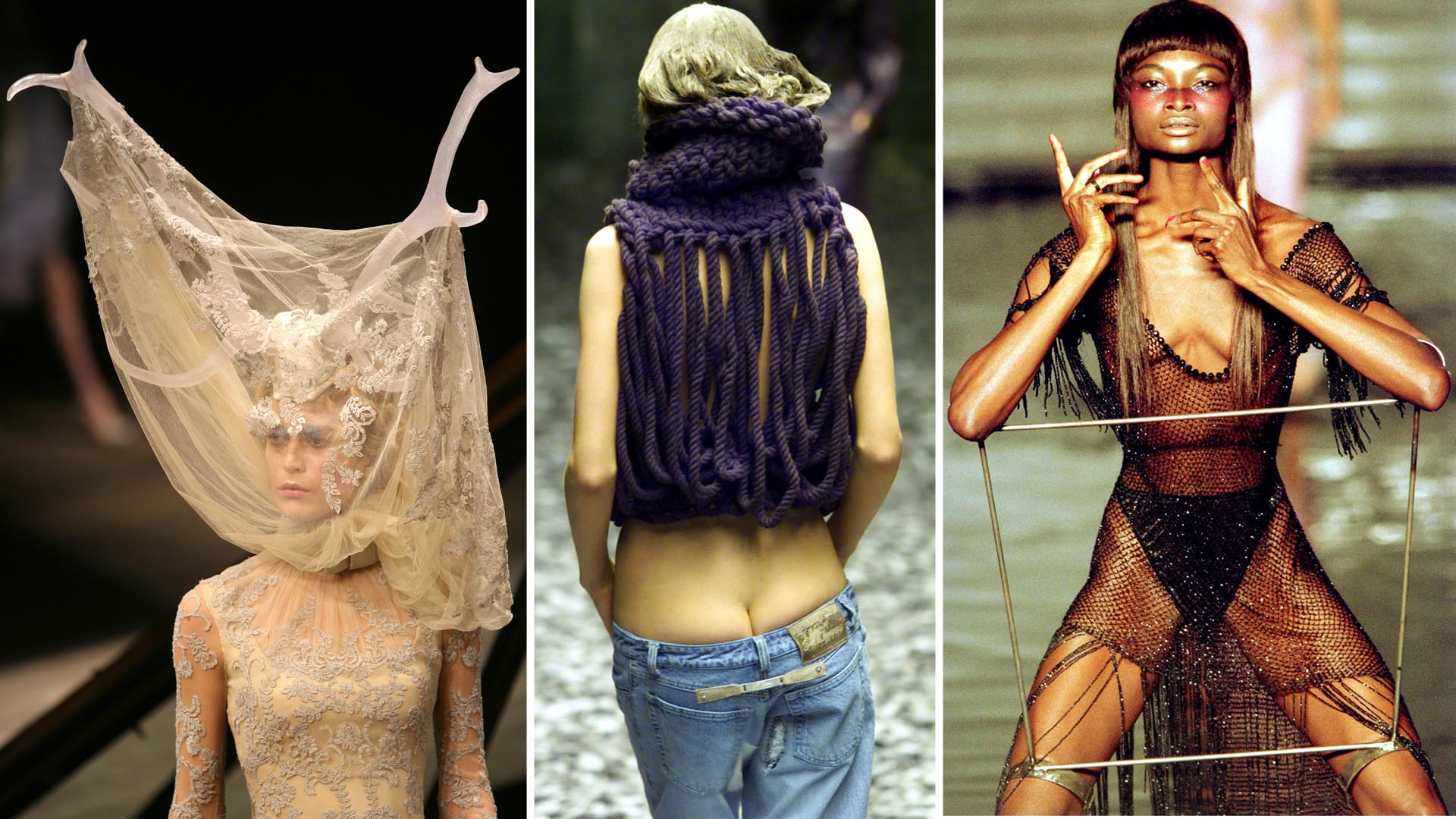 The Armadillo boot, made famous by pop star Lady Gaga in the “Bad Romance” music video, is a nearly 12-inch-high footwear that elongated the leg. It also transformed a woman’s foot into a lobster claw.

The shoe appeared in one of McQueen’s final runway shows in October 2010, in a collection that also included shoes inspired by the creature in 1979’s “Alien” and ensembles that made models look like jellyfish.

“To do something special, you need to change the silhouette,” Wilson said. 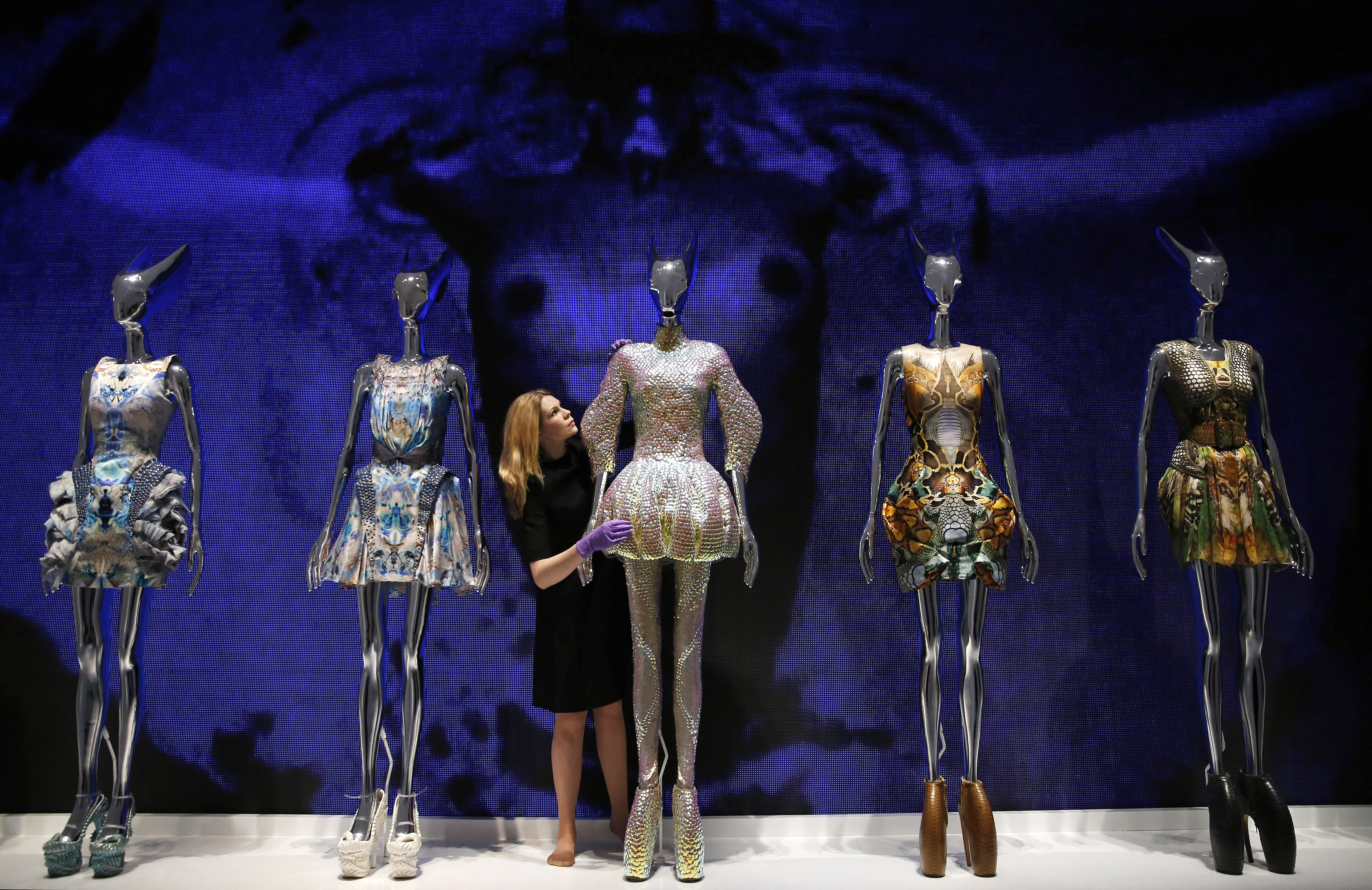 A staff member amid the dresses from the Alexander McQueen Plato’s Atlantis 2010 collection in the “Alexander McQueen: Savage Beauty” exhibition in London on March 12, 2015. Photo by Suzanne Plunkett/Reuters

McQueen’s play with form can be traced to his early years in the industry. In 1995, McQueen introduced the world to the “bumster,” the low-rise pant that showcased the builder’s bum.

The bumster became a hallmark of the McQueen brand that reappeared in subsequent shows.

“It was unusual at the time, but he brought a heavy influence of body modification, or transhumanism,” Marquez said. “He really played with the form, the body, and tried to stretch it as far away from its natural form as he possibly could.”

And if McQueen too often turned his models into beasts, like the horned creatures in the 1997 collection, “It’s a Jungle Out There,” it’s because he viewed the natural world as a constant source of inspiration.

“He thought that nature was the best creator ever,” Marquez said.

Nature, after all, follows the Fibonacci sequence.

His shows were performance art. 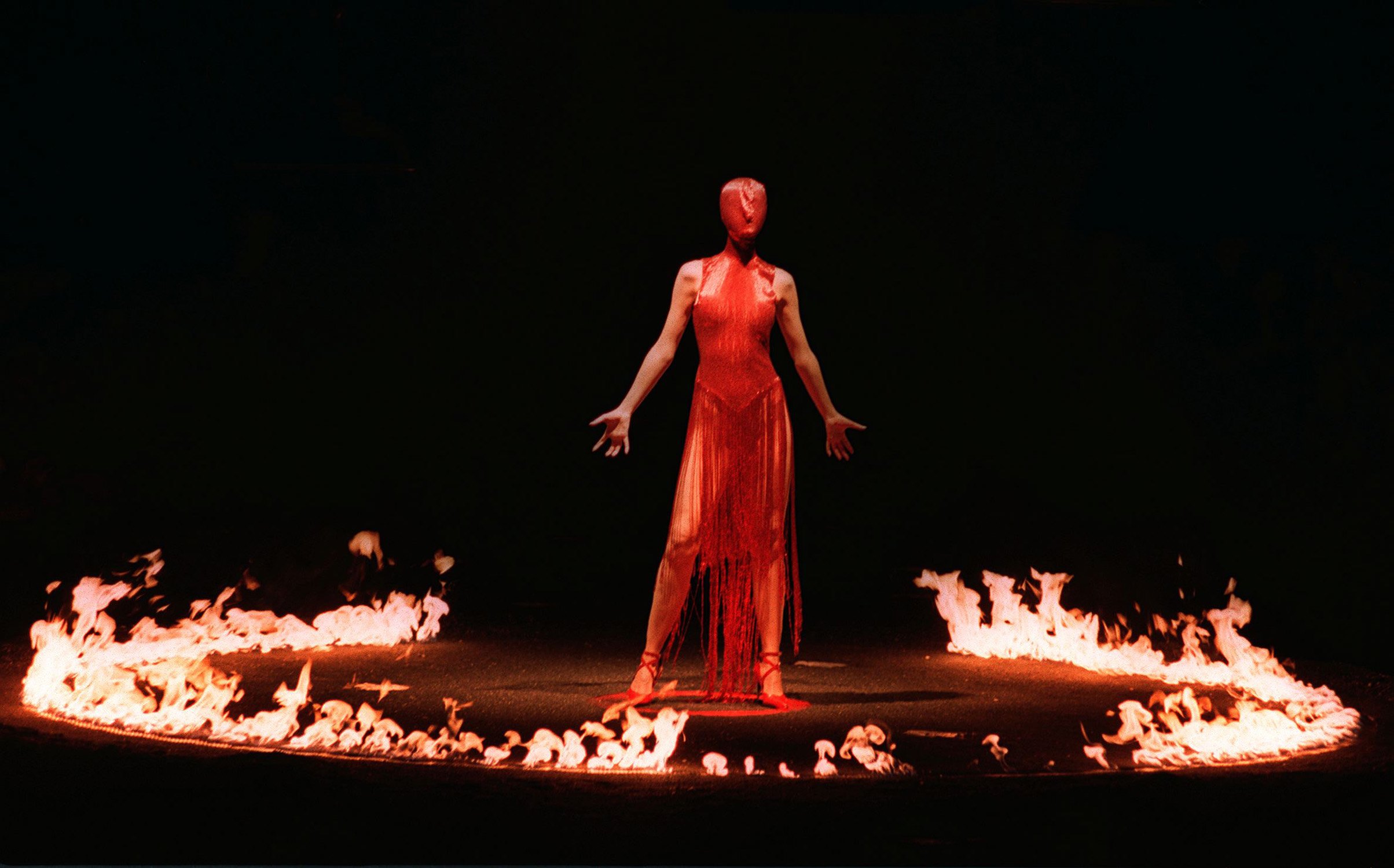 A model wearing a red hooded cat suit, stands among a ring of fire during the finale of British designer Alexander McQueen’s autumn/winter 1998/1999 fashion collection on the last day of London Fashion week. Photo by Paul Vicente/AFP/Getty Images

In his 2009 “Horn of Plenty: Everything But the Kitchen Sink” collection, all the models wore various detritus on their heads with houndstooth skirts to match. Several models wore upturned umbrellas, while others wore coke cans, woven baskets and car parts atop their heads.

A model with a white plastic bag above her head has a backstory, but the world she inhabited told a loftier tale. In the middle of the show was a pile of trash, spray painted black. There was a kitchen sink.

“It wasn’t just beautiful grandiose garments,” Marquez said. “It was also a story to tell through those garments.” And his collections were also themes, embedded with social, political and personal messages, he said.

At the time, The New York Times called the collection a “slap in the face” to the fashion industry.

McQueen didn’t parse words when he mocked the establishment. “The turnover of fashion is just so quick and so throwaway, and I think that is a big part of the problem. There is no longevity,” he said at the time.

Models present creations by British designer Alexander McQueen as part of his “Horn of Plenty” ready-to-wear women’s collection during Paris Fashion Week on March 10, 2009. In the middle of the runway is a pile of garbage, including recycled props from past McQueen shows. Photo by Pascal Rossignol/Reuters

Although some of his peers, like Versace, brought drama to the runway, McQueen was among the first to come up with these grandiose, almost theater-like fashion shows, Marquez said.

One particular lasting impression came in 1999, when McQueen’s “No. 13” show ended with two robotic arms spraying paint onto Shalom Harlow’s simple white dress as she rotated on a turntable.

Harlow told the Metropolitan Museum that the finale was an “aggressive sexual experience” and likened it to the moment of creation or the Big Bang.

“The sound, the music, the concept and the clothes, that’s the whole experience to McQueen,” Wilson said.

He was a skillful tailor. 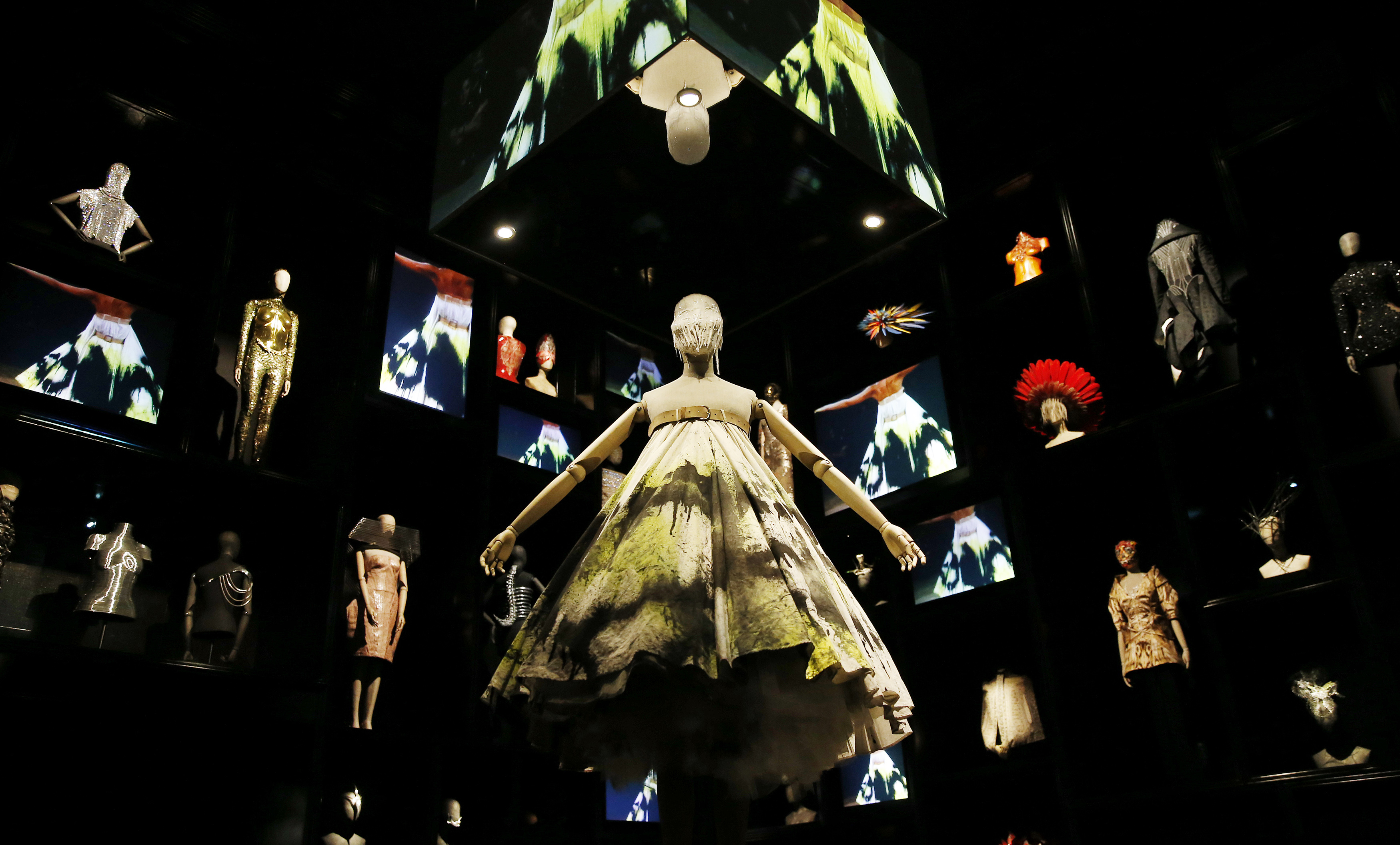 A dress which was created for the Alexander McQueen No. 13 1999 collection fashion show is displayed in the “Alexander McQueen: Savage Beauty” exhibition in London on March 12, 2015. Photo by Suzanne Plunkett/Reuters

The “Savage Beauty” exhibition at the Met in 2011 and the Victoria & Albert in London this summer took McQueen’s garments out of the context of their theatrical productions and set them behind the glass. In their stillness, the clothes were divorced from the catwalk where so much of McQueen’s artistry was found in seeing them move.

But the stationary museum setting revealed an oft-forgotten aspect of McQueen’s mastery: He was an impeccable tailor.

“I don’t think he got enough credit for the ways he excelled in traditional forms,” Hyland said. “He’s remembered for blockbuster shows and sets, but the actual clothes didn’t get their due.” 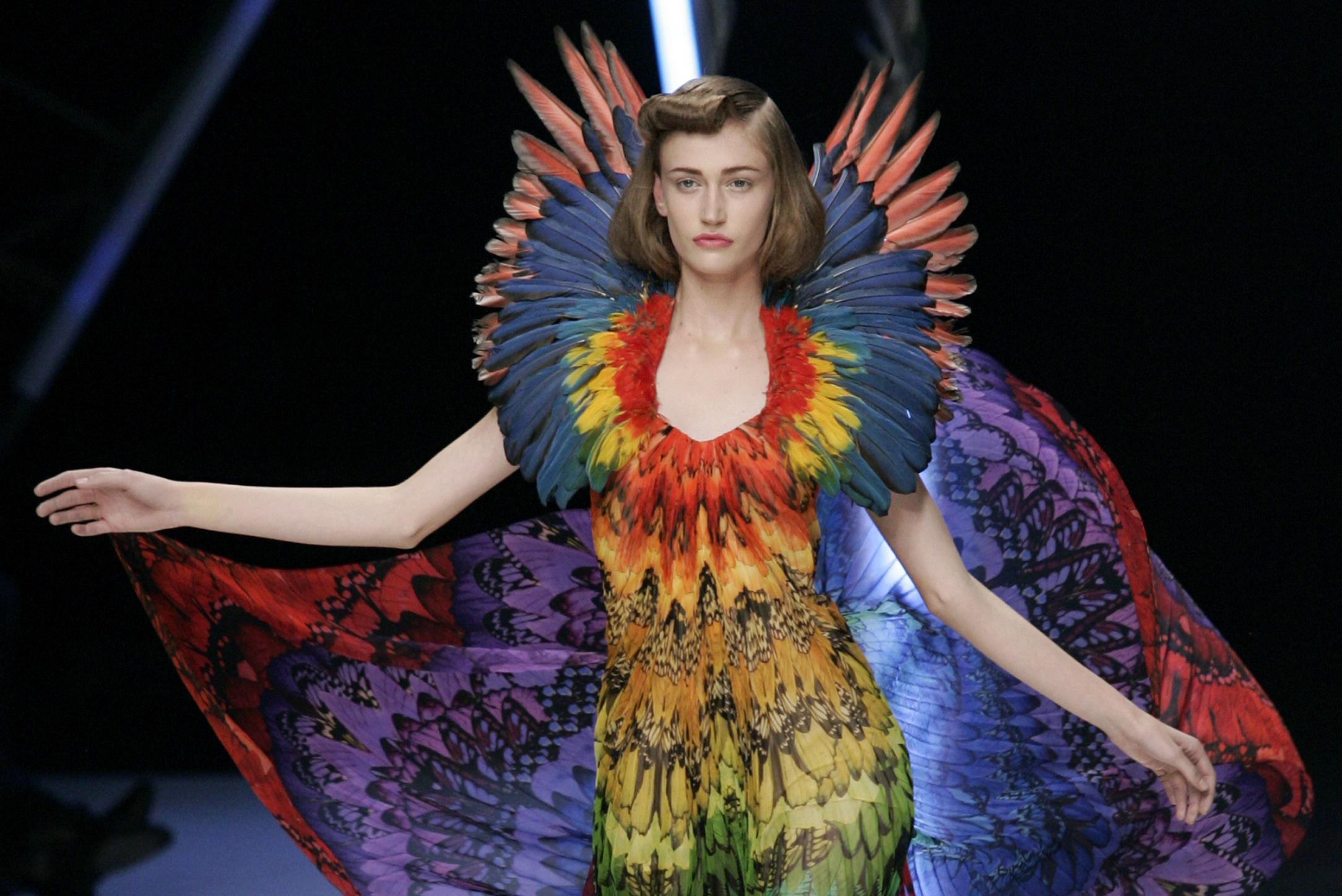 A model presents a creation by British designer Alexander McQueen as part of his 2008 ready-to-wear fashion collection in Paris on Oct. 5, 2007. Photo by Benoit Tessier/Reuters

For four years, McQueen was a one-time apprentice on Savile Row, a centuries-old destination for men’s tailoring in Britain, where he mastered the construction of a garment. Upon closer inspection, one could marvel at the precise stitching and shape of a Victorian-influenced jacket, details that may be overlooked when, say, a model wears a dragonfly headdress made out of Swarovski crystal.

Underneath all the sartorial transformations of McQueen’s garments, they always had a foundation of fine tailoring.

He reveled in history’s darker moments

He printed photographic images from the Vietnam War on his clothes. He mined iconography from the Victorian era. He also referenced historical murders, including a personal connection to serial killer Jack the Ripper. A 15th century painting of Jesus’s crucifixion by Flemish artist Robert Campin appeared in the middle of his animalistic 1997 collection.

He also famously explored unsavory parts of British history in his 1995 “Highland Rape” collection, which was “widely misinterpreted,” Hyland said. 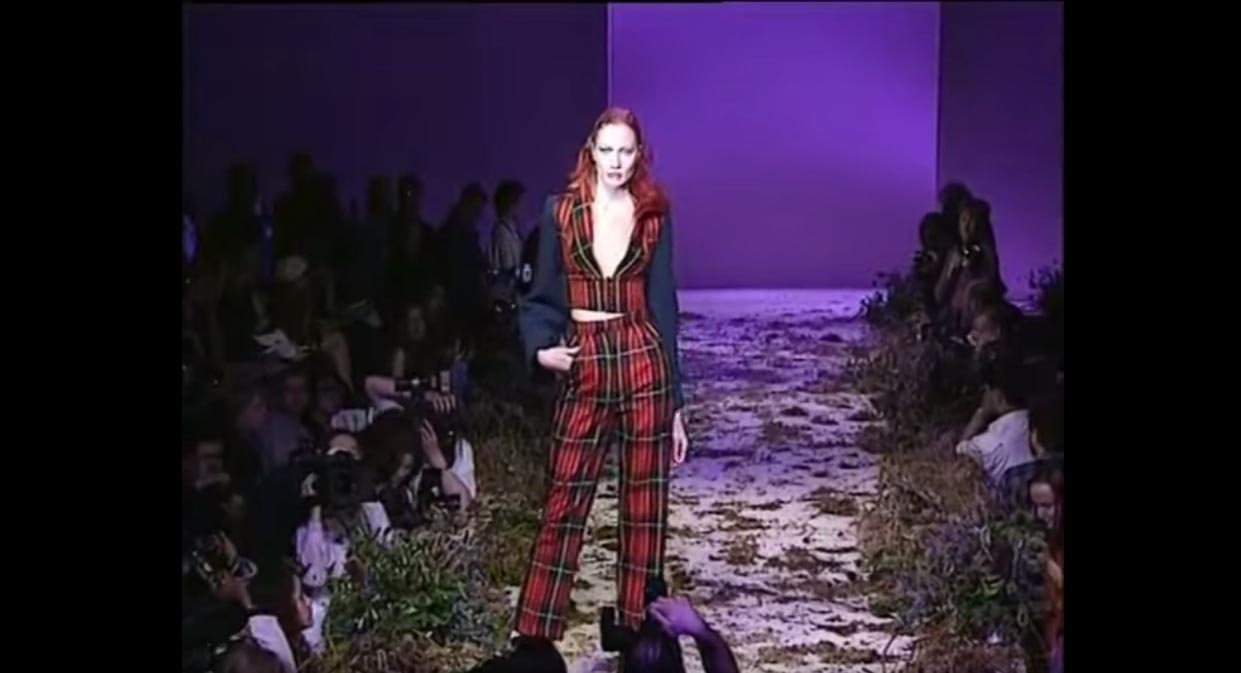 The models were bloodied with strategic — and disturbing — rips in their tartan and lace dresses, sometimes exposing their breasts. It was the type of collection from McQueen that earned him the title “l’enfant terrible” and fierce accusations of misogyny in the press.

“[McQueen] said that he didn’t intend for it to be about actual rape, but more about what happened to his ancestors,” Hyland said.

In Wilson’s biography, McQueen said the collection was a corrective to the “fake history of Vivienne Westwood.”

“[Westwood] makes tartan lovely and romantic and tries to pretend that’s how it was,” he’s quoted in the book. “Well, 18th century Scotland was not about beautiful women drifting across the moors in swathes of unmanageable chiffon. My show was anti that sort of romanticism.”

Left: A model wears a demented woven basket on her head by British designer Alexander McQueen as part of "Horn of Plenty," his 2009 ready-to-wear women's collection during Paris Fashion Week Photo by Pascal Rossignol/Reuters