Monument unveiled to activist, journalist Ida B. Wells in Chicago

CHICAGO (AP) — A monument to journalist and civil rights activist Ida B. Wells-Barnett was unveiled Wednesday in Chicago.

Officially called The Light of Truth Ida B. Wells National Monument, the commemoration created by sculptor Richard Hunt was dedicated in the South Side neighborhood where Wells lived out her life.

The monument has three bronze columns that support intertwined bronze sheets twisted into coils and spirals. One observer had trouble describing the abstraction at the top of the monument, asking if it was a hat or a crown of thorns. She was more certain about the columns.

“It is interesting,” spectator Roberta Trotter told the Chicago Tribune. “I just want to know what the artist thinks before I say more. But I do see a strong base. That, I understand — Ida was a strong woman.”

WATCH: This Ida B. Wells mosaic is also a monument to women’s suffrage

Granddaughter Michelle Duster said traditional busts and statues of Wells were considered, but she and others pushing for the monument preferred something interpretive, which she said projects Wells better than the literal.

The monument to Wells was financed by contributions made during a fundraising campaign over several years led by Duster. It sits on the site of the Ida B. Wells Homes, a housing project constructed in the 1930s, torn down in 2011 and replaced with market rate and subsidized housing.

“Hopefully it becomes a point of pride to Bronzeville, the kind of thing people want to serve as a backdrop to their lives here,” Duster said. “That’s what I want — a gathering spot.” 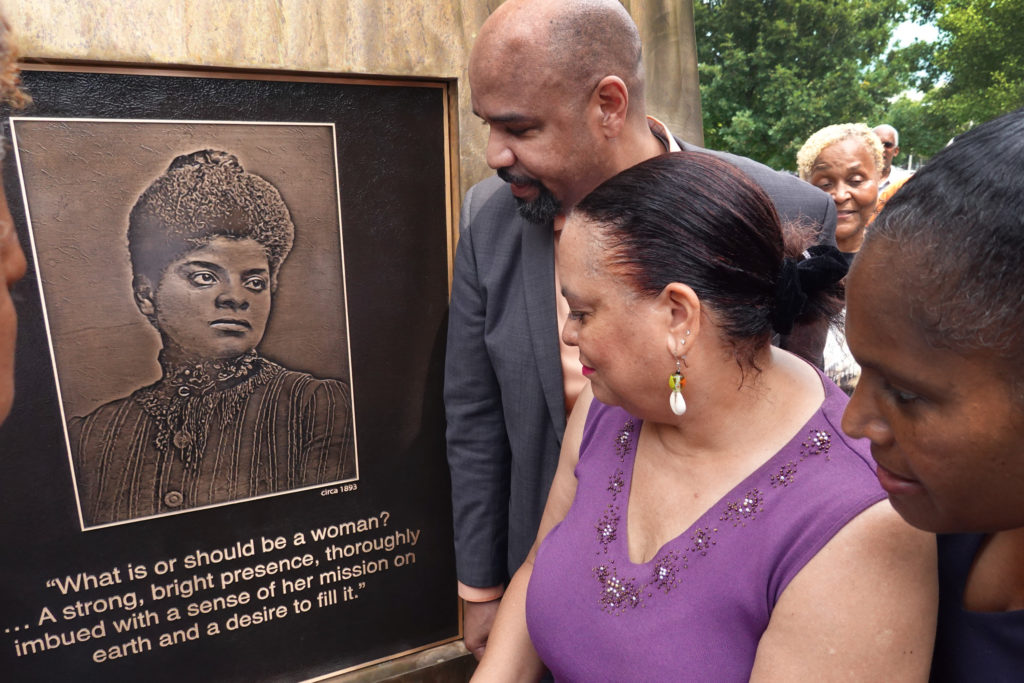 CHICAGO, ILLINOIS – JUNE 30: Daniel (L) and Michelle (C) Duster attend the dedication of a monument to their great-grandmother, journalist, educator, and civil rights leader, Ida B. Wells on June 30, 2021 in Chicago, Illinois. The monument stands where the Ida B. Wells public housing complex once stood in the Bronzeville neighborhood. (Photo by Scott Olson/Getty Images)

Congress Parkway, a major street in Chicago’s business district, was renamed for Wells in 2019.

Wells, who was born a slave in 1862 in Mississippi, was a 30-year-old newspaper editor in Memphis, Tennessee, when she began her campaign against lynching. Wells’ crusade was prompted by the 1892 lynching of a man whose first child was her godchild. She traveled the South over several months interviewing witnesses and reading reports of similar events, which she published in the newspaper she co-owned and edited, The Memphis Free Speech and Headlight.

In 2020, Wells was awarded a posthumous Pulitzer Prize for her reporting on the lynching of African Americans.

Left: CHICAGO, ILLINOIS - JUNE 30: A ceremony to dedicate a monument to journalist, educator, and civil rights leader, Ida B. Wells is held on June 30, 2021 in Chicago, Illinois. The monument, created by artist Richard Hunt, stands where the Ida B. Wells public housing complex once stood in the Bronzeville neighborhood. (Photo by Scott Olson/Getty Images)