This Ida B. Wells mosaic is also a monument to women’s suffrage

While women of color have been sometimes overlooked throughout history, you can’t miss suffragist and civil rights icon Ida B. Wells inside Washington, D.C.’s Union Station right now.

A new 1,000-square-foot art installation of the pioneering journalist’s portrait was unfurled onto the floor of the station’s cavernous main hall on Sunday. Made out of non-slip vinyl, the image is a mosaic of about 4,500 photos of suffragists, along with some images of memorabilia from the movement. The public art project was commissioned by the Women’s Suffrage Centennial Commission to commemorate the 100th anniversary of the 19th Amendment.

Helen Marshall, the British artist behind the installation, has created giant, photo-based mosaics for about 20 years. She said the mosaic focuses on Wells — a “rebel with a cause” — because she thought a lot of women today would be able to identify with her. “She was really brave,” Marshall said of Wells, “and she was a champion of investigative journalism.” 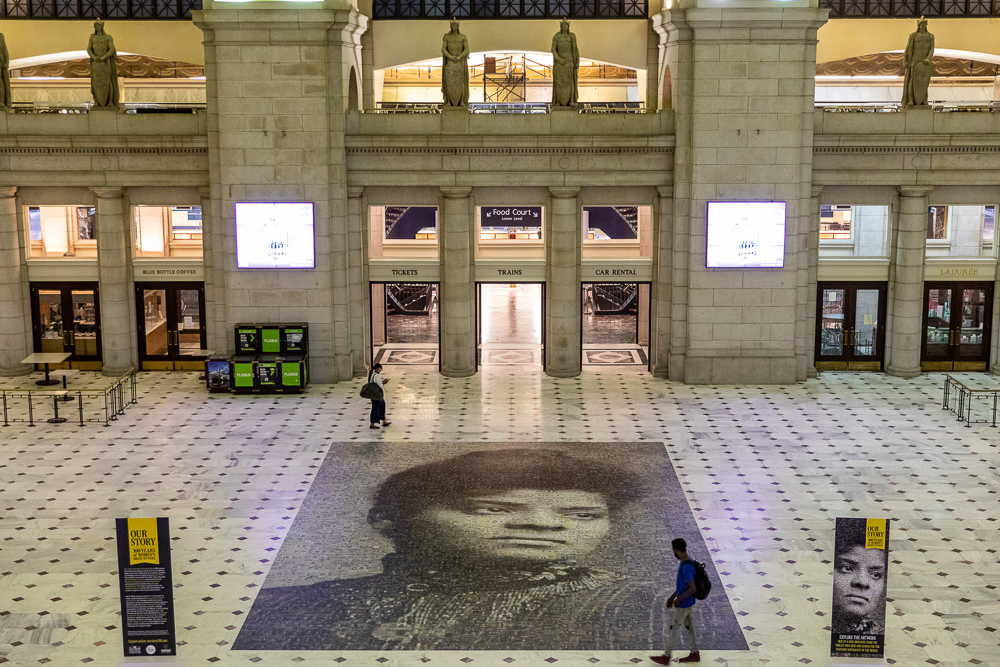 Wells tirelessly told the stories of the African American experience, using journalism as a tool for racial equality. She spent the early 1890s chronicling lynchings after a white mob murdered three of her friends, traveling throughout the South to dig up records and eyewitness accounts. In turn, she exposed “the old thread bare lie” that lynchings were committed to “protect white womanhood.”

“The cowardly lyncher revels in murder, then seeks to shield himself from public execration by claiming devotion to woman. But truth is mighty and the lynching record discloses the hypocrisy of the lyncher as well as his crime,” Wells said in a 1909 speech to the National Negro Conference in New York.

Marshall said she wanted to stage a large-scale image of Wells in a public space because “we’re not seeing enough of African American women — all women — in these ways. They need to be more visible. They need to be commemorated and not just in temporary works, but permanent artworks.” 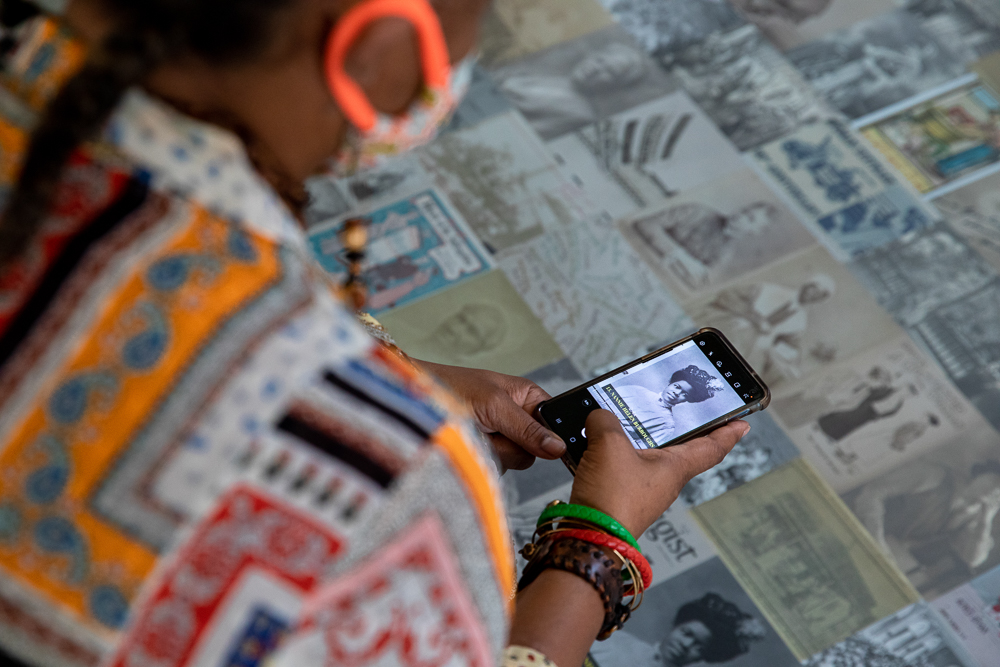 A passerby getting a closer look of the floor mosaic. Photo by Amanda Rhoades/The People’s Picture, Purpose Entertainment, and the Women’s Suffrage Centennial Commission

The photo mosaic, titled “Our Story: Portraits of Change,” will be on display until Aug. 28. Viewers who can’t see it in person can examine a digital recreation of the artwork, which has more information about the many suffragists featured within the mosaic. The 19th Amendment notably granted voting rights for millions of women — but not all of them. Ratification helped white women to vote, while women of color — Black women in particular — remained vulnerable to laws and tactics that aimed to suppress their votes.

Among the thousands of images in the mosaic is Sojourner Truth, an abolitionist and itinerant preacher also known for her traveling lectures. Mabel Ping-Hua Lee fought for women’s rights even though she and other Asian Americans were barred from voting due to the 1882 Chinese Exclusion Act, which lasted after the 19th Amendment was passed. Adelina Otero-Warren was a prominent suffragist in New Mexico who rallied support for the movement from both Spanish- and English-speaking communities.

“It’s inclusive and accessible,” Marshall said of the mosaic, “and lots of people who would not normally have known anything about art or this story would just stumble across it and go, ‘Oh wow. You know, I learned something today.’” 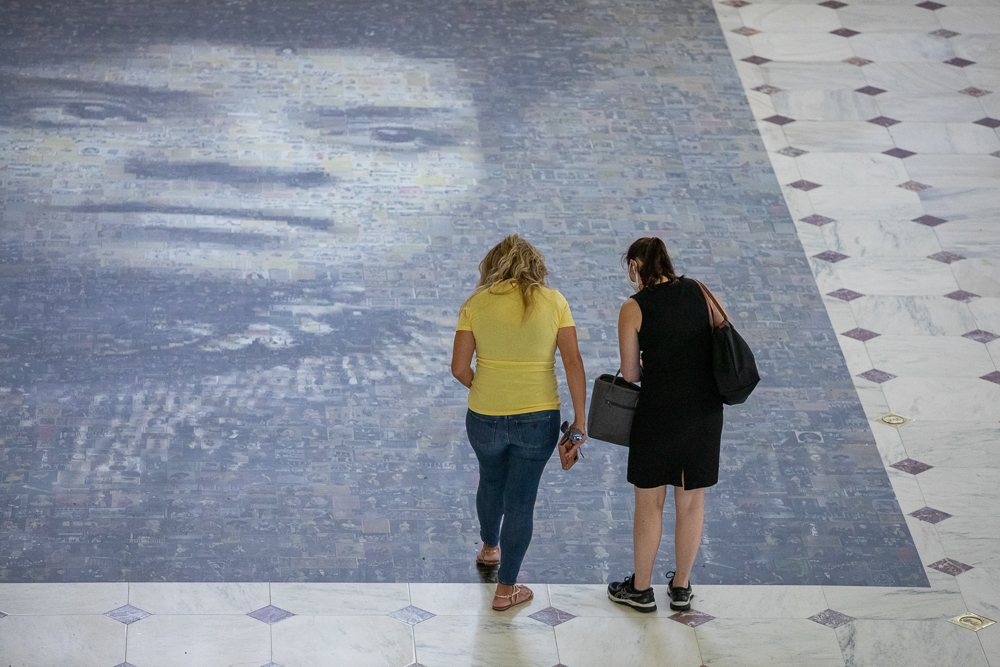 People inside Union Station routinely stopped to get a closer look of the Ida B. Wells mosaic. Photo by Amanda Rhoades/The People’s Picture, Purpose Entertainment, and the Women’s Suffrage Centennial Commission

Passersby stop and explore the artwork’s many different images. Others take photos. A plaque nearby lists Wells’ accomplishments, along with a reminder of how white suffragists excluded or sidelined women of color to advance their goals. During a 1913 suffrage parade in D.C., Wells, a delegate from Illinois, “famously protests racial segregation by refusing to march in the back of the procession.” Instead, Wells took her place among the Illinois delegation moments after the march had started.

For Marshall, the mosaic deliberately harkens back to floor mosaics from ancient times, when people then, too, would encounter them in big public places.

Christina Korp, executive producer of Purpose Entertainment and co-creator of the mosaic, was on-site Monday, talking with people about the art project and handing out brochures. She watched as people hunched down and inspected individual photos. (Marshall, who had planned on traveling to D.C. for the installation, stayed in London due to the novel coronavirus.)

Korp said she was asked why the mosaic was on the floor and not on a wall. “As a thousand-square-foot mosaic, you wouldn’t be able to look at it closely,” she said. “This way [on the floor], you can get up real close.”

Korp said when she started working on the project, she didn’t know many names beyond Susan B. Anthony, who’s also featured in the mosaic.

“I knew there had to be a lot more women involved with [women’s suffrage], especially women of color and women of diverse backgrounds,” she said.

One such suffragist is Zitkála-Šá, a citizen of the Yankton Sioux Tribe and an activist who fought for women’s suffrage. She lobbied to strengthen political power for American Indians, who were denied the right to vote because they weren’t considered U.S. citizens until 1924, four years after the 19th Amendment was ratified.

Korp, who grew up in South Dakota — same as Zitkála-Šá — said her grandmother was also an elder of the Oglala Sioux Tribe. But she hadn’t learned about Zitkála-Šá until she started working with the commission to piece together the mosaic.

“I was kind of like, ‘Wow, I grew up in Native heritage, and I never heard of her. And so that really stuck with me,” Korp said, adding that Zitkála-Šá also assimilated into white culture, believing it would help her on her mission to preserve Native American culture.

“Her idea behind [assimilation] was hoping that somehow she could try to convince people or compel people to understand the plight of Native Americans,” Korp said.

READ MORE: A century ago, some American women won the right to vote. Here’s what women say today

Union Station, too, has historical ties to the suffrage movement. It was there that white suffragists, who had been arrested and imprisoned for protesting in front of the White House in 1918, launched the “Prison Special” the following year. It was a cross-country train tour where some of the women who were arrested dressed up in recreations of their prison attire and spoke out about their mistreatment by the government.

Colleen Shogan, vice chair of the Women’s Suffrage Centennial Commission, said the “Prison Special” was a “multi-media extravaganza” of speeches and re-enactments of their time in prison.

The tour was meant “to try to get people to pay attention to the fact that many, many women went to jail or prison for actually asking and demanding the right to vote,” she said.

Wells wasn’t a part of the train tour, but in 1884 she filed a lawsuit against a railroad company after she was forcibly removed from a train car reserved for white patrons. Although Wells initially won her case, the Tennessee Supreme Court ultimately overturned the verdict.

Shogan hopes that the monumental size of the photo mosaic demonstrates how many women worked and fought so that the 19th Amendment could become part of the Constitution. “This movement wasn’t just one or two or three women. It was all of these women.”

She said it also offers a lesson for today: “If we want to get things done, if we want to affect social change, if we want to invoke more women’s empowerment, women’s rights, we are going to have to capitalize upon that diversity of women.”

The Women’s Suffrage Centennial Commission is a funder for the PBS NewsHour.