Neil Simon, whose comedic mastery dominated American stages for decades, died Sunday at 91 of complications from pneumonia, his family said in a statement.

Over the course of a prolific career that included more than 30 plays — including hits “The Odd Couple” and “Barefoot in the Park” — and multiple accolades, Simon drew on the sometimes-unexpected comedy lurking in the lives of middle-class Americans, inspiring laughs of recognition from vast audiences.

Simon found absurdity in the everyday, examining the anxieties of middle-class life in America with comedies about mismatched duos, family quirks and daily dramas.

“The good mechanic knows how to take a car apart; I love to take the human mind apart and see how it works,” he told the Paris Review in 1994.

Simon was born in 1927 to a working-class family in the Bronx, New York. His father, Irving Simon, was a garment industry worker who repeatedly left Neil’s mother, May, when he was a child.

Those experiences would later inform a trilogy of plays on the life of a Jewish family in Brighton Beach, New York: “Brighton Beach Memoirs” (1983), “Biloxi Blues” (1985) and “Broadway Bound” (1986).

“My mother and father were gone when I wrote it, so I did tell about the fights and what it was like for me as a kid hearing them. I didn’t realize until someone said after the first reading that the play was really a love letter to my mother! She suffered the most in all of it. She was the one that was left alone,” he told the Paris Review.

Simon wrote in his autobiography “Rewrites,” published in 1996, that his older brother Danny had inspired him to pursue comedy. “The fact is, I probably never would have been a writer if it were not for Danny,” he wrote. “Once, when I was 15 years old, he said to me, ‘You’re going to be the funniest comedy writer in America.’ Why? Based on what? How funny could I be at 15?”

Simon attended New York University, then the University of Denver while enlisted in the Army Air Forces Air Reserve training program. After his discharge, he began working at Warner Bros. with Danny, where they produced sketches for comedians including Sid Caesar and Jackie Gleason.

“Come Blow Your Horn” (1961) marked Simon’s move to the stage from television sketch writing. While writing it, Simon told the Paris Review, his characters did not cooperate with the outline he planned.

“I didn’t get past page fifteen when the characters started to move away from the outline. I tried to pull them back in, saying, Get back in there. This is where you belong. I’ve already diagrammed your life. They said, No, no, no. This is where I want to go. So, I started following them,” he said.

He followed that play with “Barefoot in the Park” (1963), which ran for 1,530 performances, and then “The Odd Couple”(1965) a massive success that was reprised as a television series in the 1970s and again in 2015. The show, along with “Barefoot in the Park, “Sweet Charity,” and “The Star-Spangled Girl,” all ran on Broadway simultaneously in 1967. 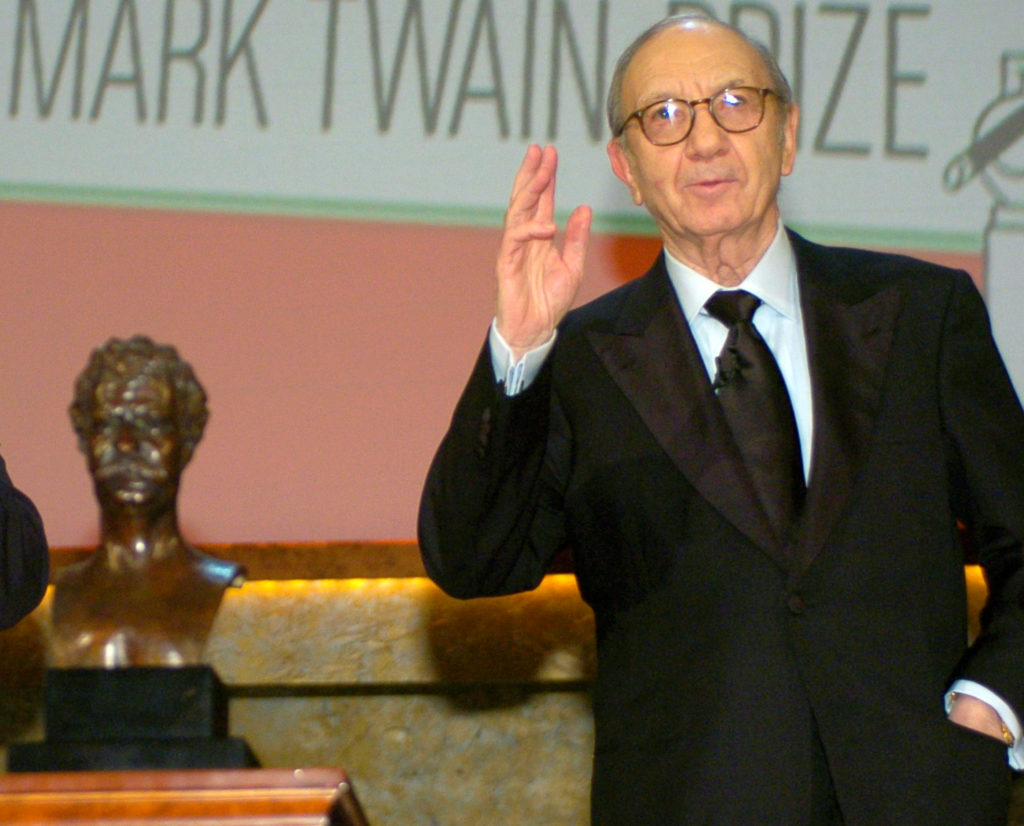 “The Odd Couple” — a comedy about a messy sportswriter Oscar and fastidious photographer Felix, whose troubled marriages bring them together as roommates — is still an American classic today.

“The delightful aspect of Mr. Simon’s talent is that he makes the predictable point unpredictably,” Howard Taubman wrote for The New York Times in 1965. “While his plot unfolds very much as you would anticipate, the situations and lines have a way of exploding unexpectedly out of the very familiarity of domestic routines.”

That familiarity drew American audiences to Simon’s work, critics noted. “For almost half a century, his comedies have offered light at the end of whatever dark tunnel America has found itself in,” John Lahr wrote for The New Yorker in 2010.

They offered the same comfort for Simon himself, who told The New York Times in 1988 that writing the play “Rumors” helped him cope with the end of his third marriage, to actor Diane Lander. “I really was in the mood to sort of go back and write just out-and-out funny, because it’s what I felt I needed in my own life. So I thought it would be fine just to go into rehearsal with a comedy, with a farce, even though they are the hardest to write.”

His commercial success was not always accompanied by acclaim, with some critics discounting his plays as lighter fare and others saying that they steered away from weighty political and social issues.

“I think, by and large, I’ve had my fair shake from the critics … When I say the critics are fair with me that includes the negative reviews because sometimes I agree with them,” Simon told the Los Angeles Times in 1989.

Simon received the Pulitzer Prize in 1991 for “Lost in Yonkers,” which also earned him a Tony Award. The show marked “his last major success on Broadway,” according to The New York Times.

Actors and directors mourned Simon with online tributes. “At a time when I was struggling with my background and identity, Neil Simon showed me that you could take the pain of your own life and make great comedy,” writer Bryan Behar said on Twitter.

“He could write a joke that would make you laugh, define the character, the situation, and even the world’s problems,” actor Harvey Fierstein wrote on Twitter.

Left: Playwright Neil Simon arrives for a program honoring him as the 2006 Mark Twain Prize recipient at the Kennedy Center in Washington, D.C., on Oct. 15, 2006. Photo by Jonathan Ernst/Reuters