Neon, spectacles and bright lights lure eaters in the age of Instagram

The sign is hard to miss. Huge, neon and red, the glowing word “QUEENS,” on the back wall of the restaurant Sekend Sun, is visible from the street on a busy block in Astoria, New York.

Owners Derrek Vernon and Jay Zimmerman installed it three years ago when the restaurant opened, hoping that people would post photos of it on social media. A few months later, it had far exceeded their expectations, drawing a steady stream of posts on Instagram — free advertising for the restaurant. Now, he’s considering a new project in Manhattan, and brainstorming the next Instagram hit.

As restaurants and other businesses compete for customers, social media platforms, in particular Instagram, are influencing how they look. Interior designers say they are increasingly creating spaces with Instagram in mind, making businesses brighter, boldly-patterned, and instantly shareable.

“Social media platforms have absolutely affected the way that we design,” Kofitsas said. “We’re trying to fantasize about how people use our space, but also create memories in our spaces. So we often have areas in our spaces that we carve out for Instagrammable moments.”

Sometimes that means creating “micro-environments” that easily fit within an Instagram frame, he said. At Catch LA, a high-price restaurant in West Hollywood, Los Angeles, a 75-foot walkway, flanked by an archway dense with foliage, greets customers. “I find a lot of people love that area to take pictures of each other,” Kofitsas said. “We had designed it that way.”

you had me at gf waffles

Framing is also an important draw at the 360 Bar at the Hilton St. Louis, where a corner of the restaurant is lit in green. The design provides an excellent frame for photographing the St. Louis arch outside, said Anita Summers, lighting expert at the Johnson Studio at Cooper Carry, which designed the bar.

I was lured out of my room for the crew discount wine. 🍷

In 2014, Christian, then a design student, along with Frances Gain and Catherine Normoyle, studied more than 1,000 Instagram posts of Hong Kong stores and shopping malls to learn more about the relationship between social media and people’s experiences in those spaces.

They observed that “spectacles” — defined as events or pop-ups that featured a focal point, like displays of “antique cars, popular animated characters, and holiday decorations” — were particularly popular on Instagram, and “far [outweighed] photos of the general architecture or interior environment.”

“What doesn’t translate well is subtlety,” Christian said. “So floor patterns, wall coverings, anything that is bright and colorful seems to attract a lot of attention.”

When the floors are prettier than you'll ever be Pssst! What are you up to today?? I went to brunch and filmed a video with @johnn_anthony that's A+ stuff! ❤️ #sf #sanfrancisco

And as restaurant-goers snap photos of their food and each other, Instagram’s popularity has encouraged designers to use brighter, warm light that’s optimal for photography, Summers said.

Now, “It’s more about lighting the space with a warm color so that skin tones look good, your plate looks good, the food looks good,” she said.

Some restaurants’ interactive lighting features have drawn attention from customers. At The Skylark, a bar in New York City, a round light fixture perfectly frames and lights guests’ faces as they pose for pictures. Bellota, a Spanish restaurant in San Francisco, features adjustable lamps at the bar, allowing people to customize the lighting.

But perhaps no lighting trend has been more instantly recognizable than the return of neon, once considered a garish hallmark of seedier neighborhoods. Now, neon is popping up at mid- to high-price restaurants, bolstered by its popularity on Instagram, said Jeff Friedman, the head of sales for the studio Let There Be Neon. 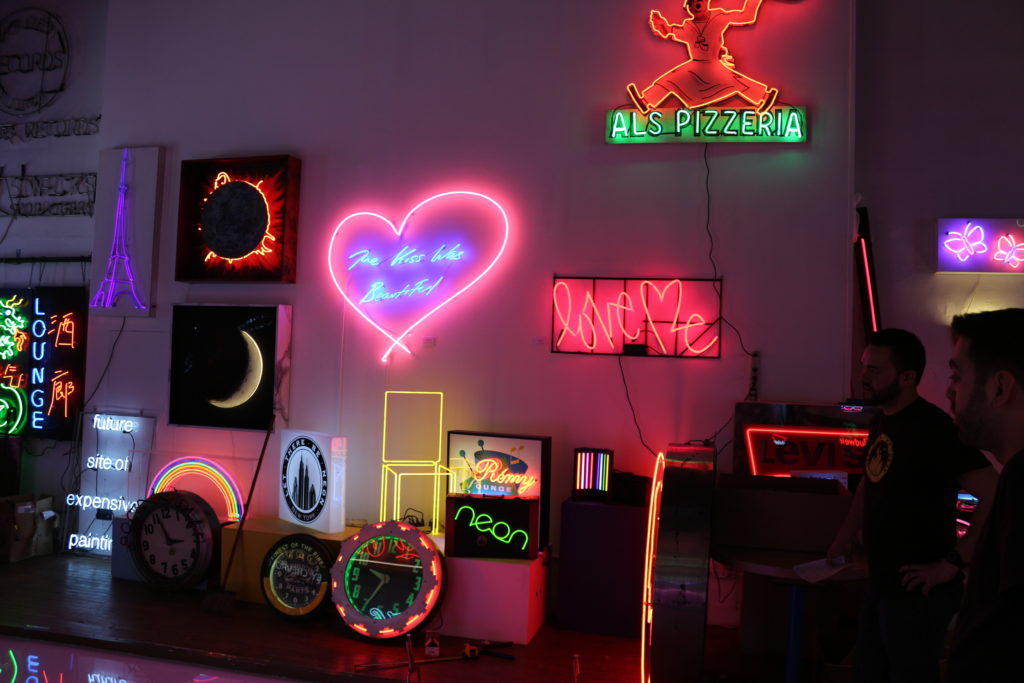 A view of Let There Be Neon, a neon studio based in New York City, New York. Photo courtesy of Jeff Friedman

It’s a notable new chapter for neon, which made its way into American culture during the 1920s and 1930s. Neon signs, usually used for advertising, became associated with consumer wealth during the manufacturing boom at the time. But in the 1950s and 1960s, as many neon signs fell into disrepair and businesses began to replace them with fluorescent lights and plastic signs, they were largely recast in the public view as markers of working-class establishments. By 1972, when Let There Be Neon was founded, neon was in a “downward spiral,” Friedman said.

London-based artist Tracy Emin, who created handwritten-style neon signs in the early 1990s, began a shift in neon’s public perception as her work spurred countless imitations, Friedman said. Today, neon has become “more of a functional decorative piece than ever before,” he said.

It’s difficult to measure the financial payoff of designing for social media. But Instagram still represents a tantalizing marketing opportunity for restaurants to draw in young people. Fifty-nine percent of adults between 18 and 29 years old use Instagram, according to the Pew Research Center, and 88 percent have Facebook.

And the same design features that work on social media may also signal that these businesses are for newcomers, said Liane Stegmaier, vice president of communications and strategy at the Brooklyn Community Foundation in Brooklyn, New York. “Aesthetically, they’re sending a message that’s very much targeted toward newer residents to the neighborhood,” Stegmaier said.

Mark Winston Griffith, Executive Director of the Brooklyn Movement Center, said that as new residents began moving into his neighborhood of Crown Heights, “There started to be a lot more [food] options around us, but the places that were popping up were not marketed to, were not designed for, were not intended for the long-term residents and people who had been here historically. It was clearly being marketed to newcomers,” he said. “You know it when you see it.”

This tension recently came to a head in Crown Heights, a historically West Indian and Jewish neighborhood where longtime residents have been moving away as rents skyrocket. The restaurant Summerhill, called a “boozy sandwich shop” by its owner Becca Brennan, opened on a popular stretch of Crown Heights’ Franklin Avenue in June. The next month, Brennan emailed a press release to news editors that touted what she called a “bullet hole-ridden wall” as part of the restaurant’s “Instagrammable” space.

Local residents called the move deeply disrespectful to the community’s history and an attempt to capitalize on misconceptions about the neighborhood. (Major crimes in Crown Heights fell by 75 percent from 1994 to 2015, according to the Wall Street Journal.) Brennan, who did not return a request for comment, told Gothamist her press release had been “cheeky” and that the damage was not actually caused by bullets. The restaurant plastered over the wall in September.

Critics have also raised the concern that in the era of digitally-driven design, businesses run the risk of looking the same.

Kyle Chayka, writing for The Verge last year, described a recent proliferation of coffee shops, coworking spaces and other spaces that share an industrial-inspired, minimalist style he dubbed “AirSpace.” As platforms like Airbnb and Foursquare increase the connectivity of these spaces, an “anesthetized” aesthetic is becoming more popular, according to Chayka.

The connective emotional grid of social media platforms is what drives the impression of AirSpace. … It resembles a kind of gentrification: one that happens concurrently across global urban centers. Just as a gentrifying neighborhood starts to look less diverse as buildings are renovated and storefronts replaced, so economically similar urban areas around the world might increasingly resemble each other and become interchangeable.

The connectivity of social platforms makes it easier than ever to imitate “Instagrammable” design, Summers said.

“At a moment’s notice, everyone’s design is at your fingertips. You don’t have to go to the restaurant to see it. It’s all over,” she said. “That’s what keeps it interesting, that you try to not let every place look the same.”

Left: At Sekend Sun in Astoria, New York, a neon sign is visible from the street. Photo courtesy of Derrek Vernon