PHOTOS: Meet the wolves and humans who inspired ‘American Wolf’

Our October pick for the PBS NewsHour-New York Times book club, “Now Read This,” is Nate Blakeslee’s narrative nonfiction book “American Wolf.” Become a member of the book club by joining our Facebook group, or by signing up to our newsletter. Learn more about the book club here.

“American Wolf” tells the tale of O-Six, a Yellowstone National Park alpha female who became known as “the world’s most famous wolf,” and the people and politics that surrounded her. Below, see photos of the wolves, their human wolf watchers and some of the settings from the book, with insights from author Nate Blakeslee.

READ MORE: ‘Why not write the biography of a wolf?’ and more advice from author Nate Blakeslee 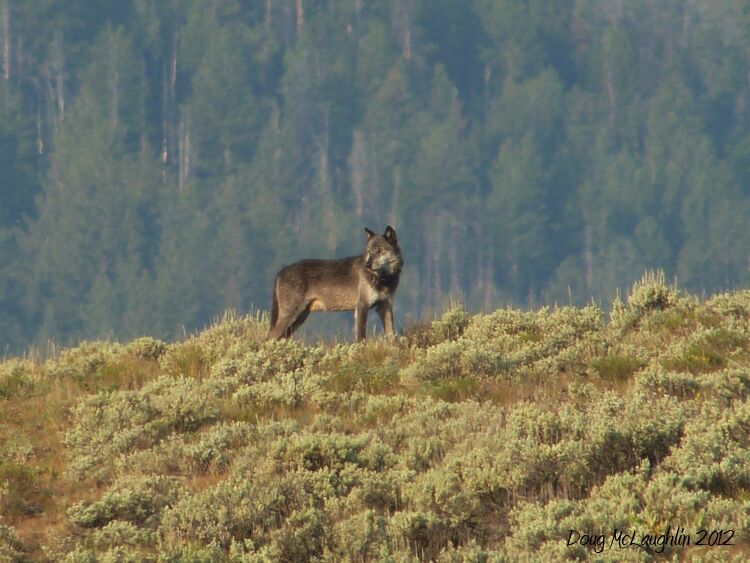 This photo of 754, O-Six’s fellow pack member, was taken near Soda Butte Creek in the summer of 2012, when he was about 4 years old. 754 was the largest wolf in the pack, weighing perhaps 120 pounds, though he was known for his puppyish demeanor. His brother, 755, was O-Six’s mate. Credit: Doug McLaughlin 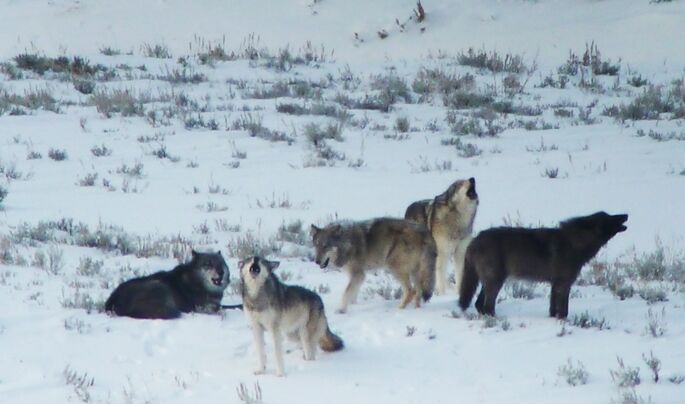 This shot of O-Six’s family, known as the Lamar Canyon Pack, was taken in Dec. 2011, when the pack numbered 12. Show here are O-Six (the gray in the rear), her mate 755 (black on the right), 754 (black on the left) and two yearling daughters. Credit: Doug McLaughlin 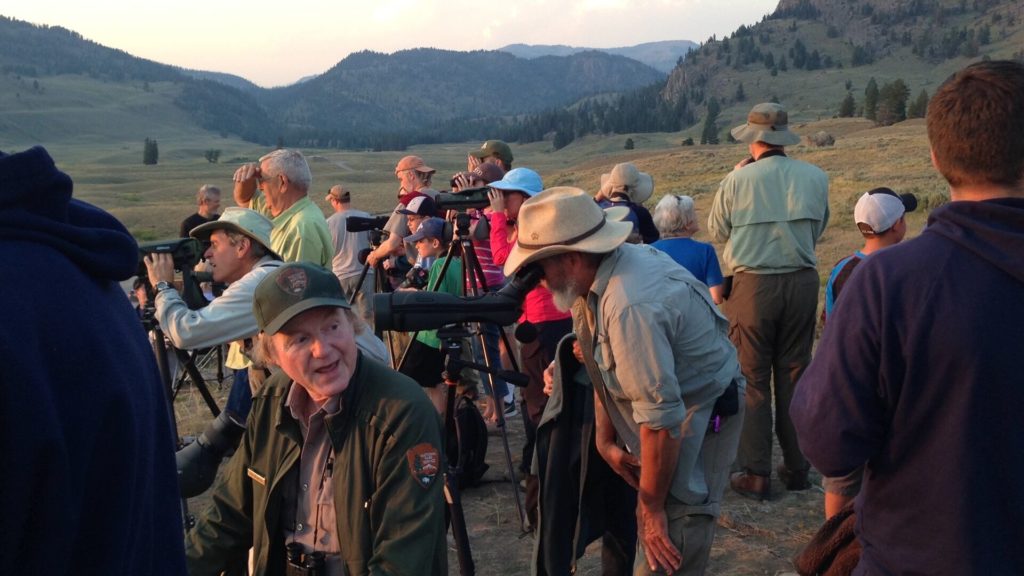 Park naturalist and Yellowstone wolf expert Rick McIntyre talks to wolf watchers on Bob’s Knob, a popular wolf viewing area in Yellowstone. The knoll is about a mile and a half from O-Six’s first den, which was visible from this location. 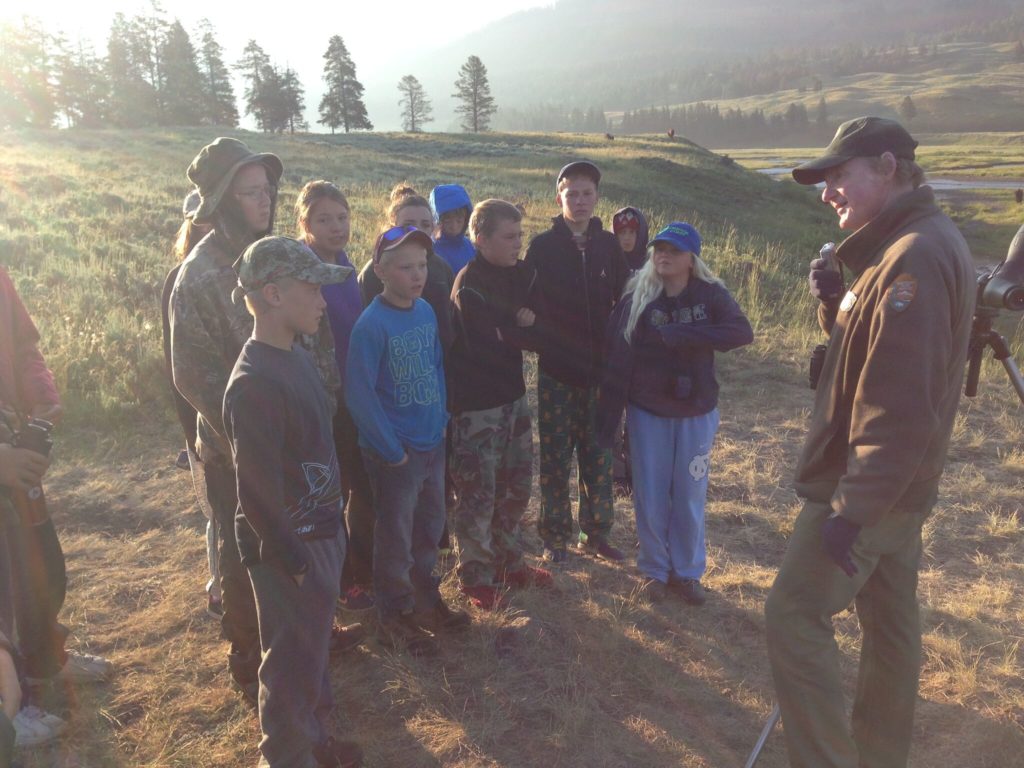 Rick gave at least 100 presentations on wolves per year, along with impromptu talks for visitors who happened to stop to look for wolves in the park. Shortly after this photo was taken, wolves came down to the river behind the kids, passing within 200 yards. 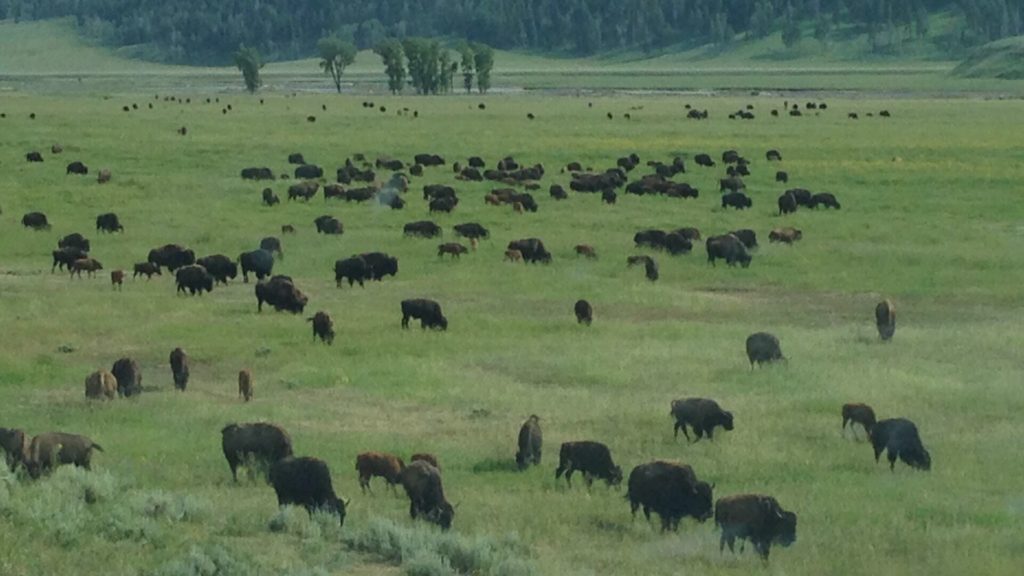 Yellowstone’s Lamar Valley has a higher prey density (mostly elk, bison, mule deer, and pronghorn) than any place on earth other than the Serengeti, making it outstanding wolf habitat.

The Lamar Valley as seen from Specimen Ridge. The enormous valley is relatively treeless, making wolves easier to locate, especially with the help of radio collars. Yellowstone is the one place in the world where wolves can reliably be found from the roadside with a spotting scope. 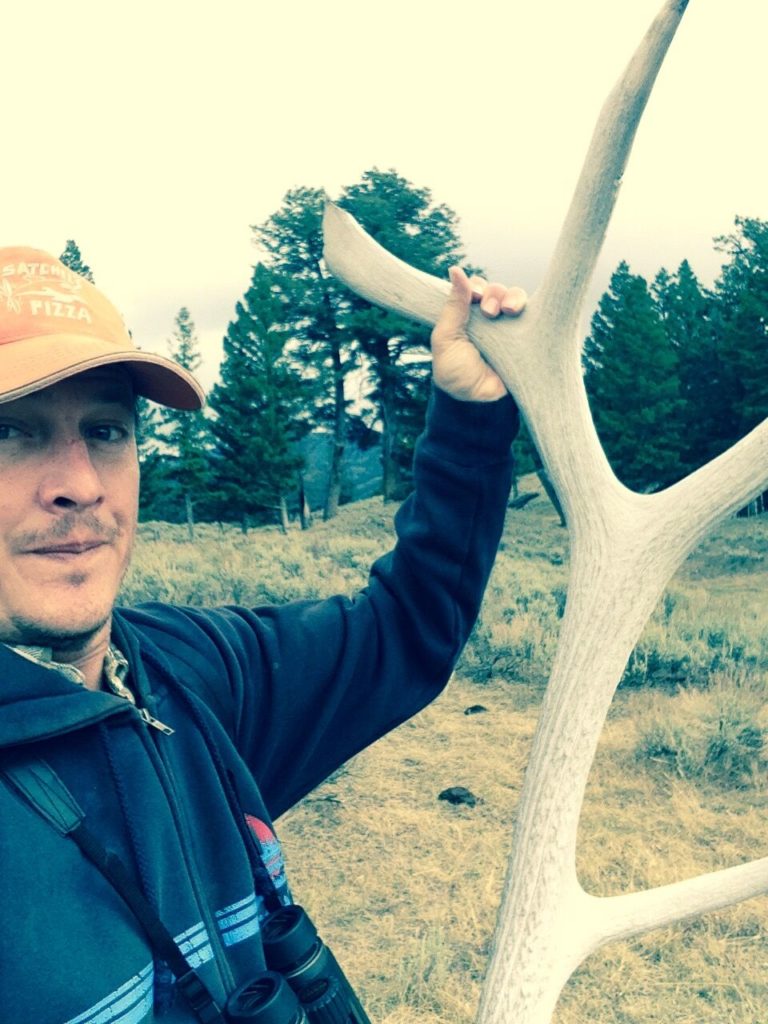 A Yellowstone visitor demonstrates how large elk antlers can get. Bulls can reach 700 pounds and have been known to attack visitors’ cars during mating season. Yet they are the main prey for the park’s wolves, which weigh on average less than 100 pounds.

The Chief Joseph Highway runs through the Shoshone National Forest, connecting Yellowstone to Cody, Wyoming. Much of the area in between is cattle ranching and elk hunting country, where wolves are considered unwelcome. 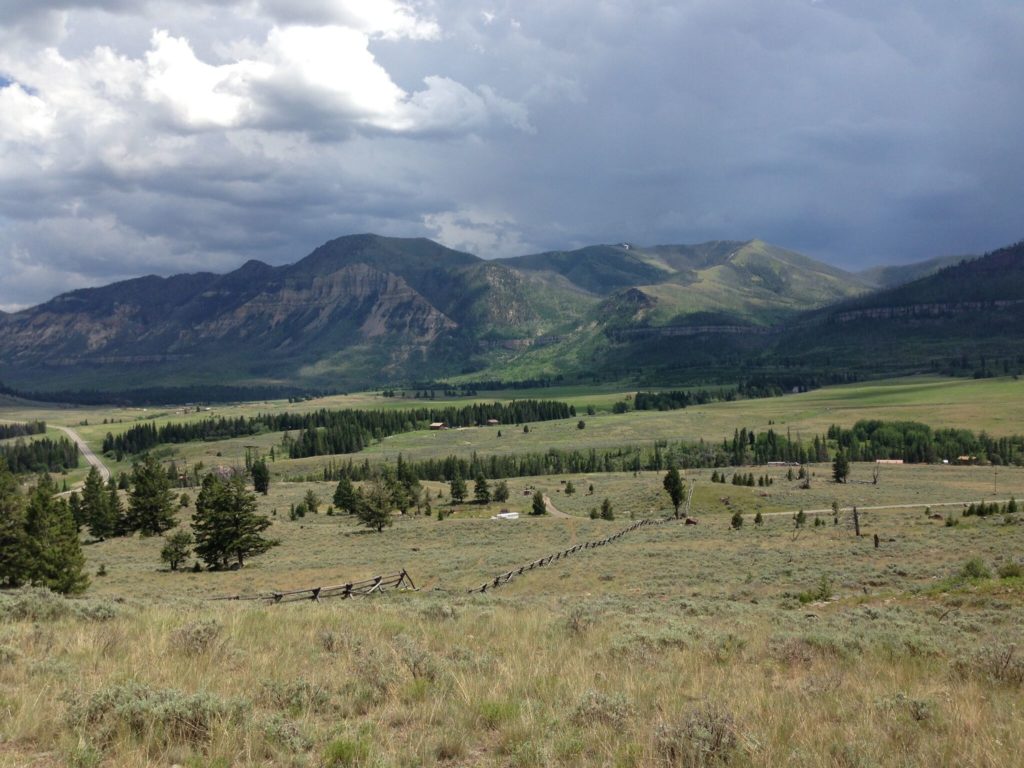 Just outside the park’s northeastern boundary is a valley known as Crandall, an extremely remote area with only a handful of year-round residents. Many Yellowstone wolves have been shot over the years after wandering into the valley. Some were taken by poachers, others by government trappers protecting livestock, and others — after federal protection for wolves was removed in 2012 — by hunters with wolf permits. 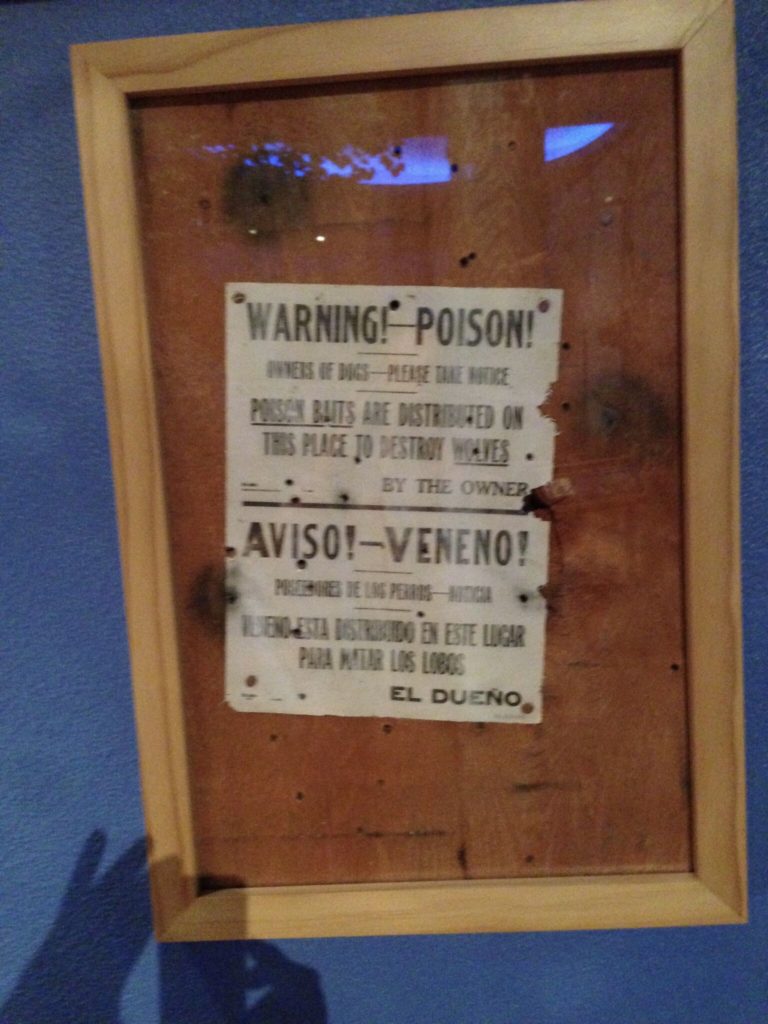 Government agents spread poison bait throughout the West on public and private land for decades in an effort to eliminate wolves. This historic notice is on display at the Buffalo Bill Center of the West in Cody, Wyoming. 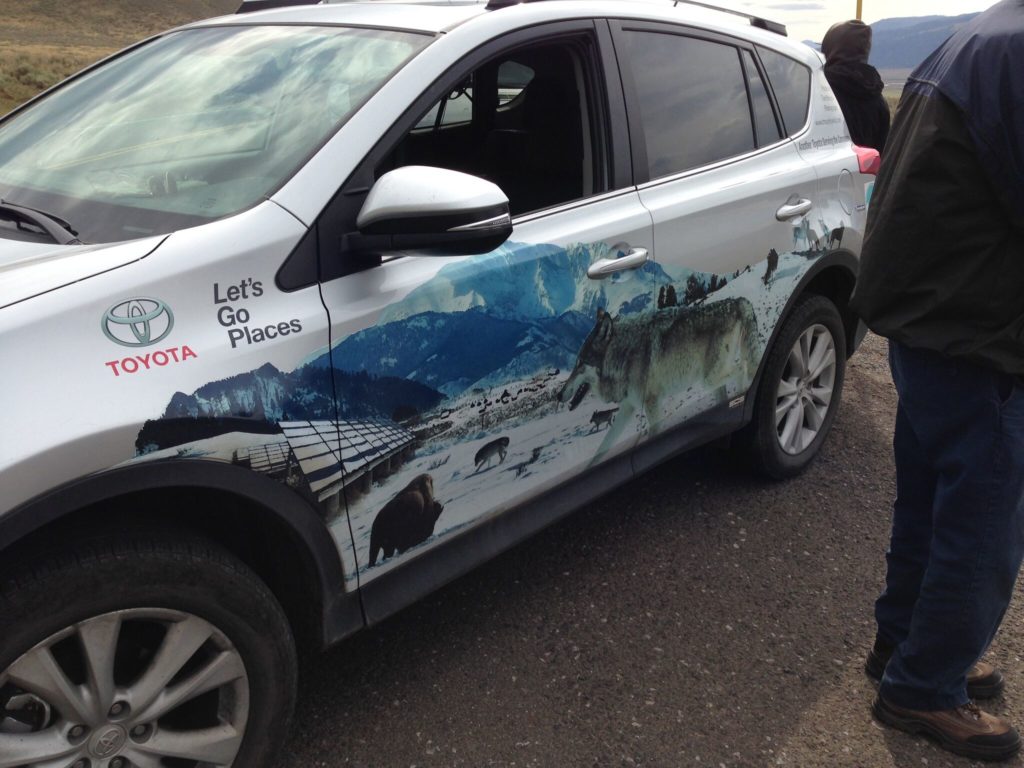 O-Six was memorialized with a giant decal on this car, which was donated for Rick McIntyre’s use in the park. 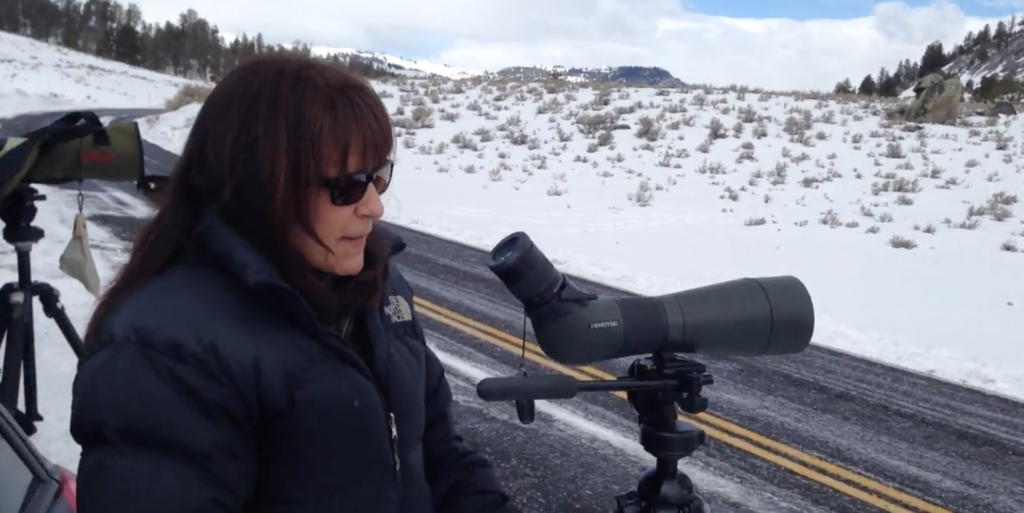 Dedicated wolf watcher Laurie Lyman took daily notes on the life of O-Six and her pack for three years. 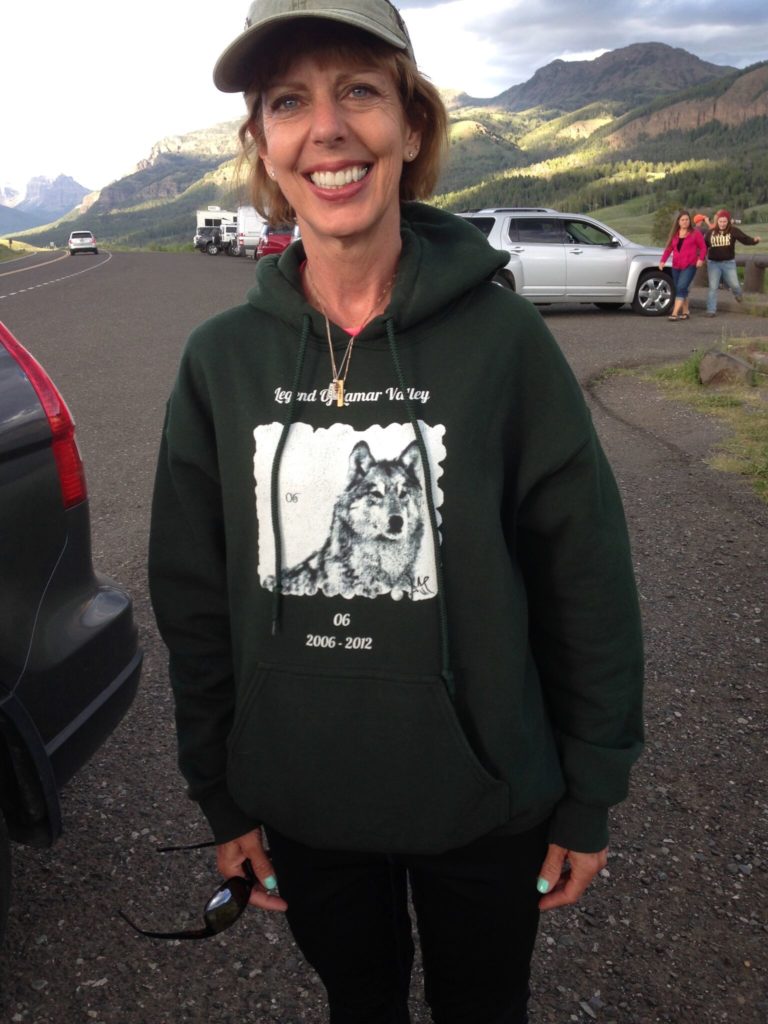 Correction: This post has been updated to correct the name of wolf watcher Susan Rhem-Westhoff.

Left: This picture was taken near Soda Butte Creek in Yellowstone in Oct. 2012, after O-Six (nicknamed for the year in which she was born) had been fitted with a research collar by park biologists. She was the fourth-generation descendant of wolves reintroduced to the park from Canada in the mid-1990s. O-Six weighed around 95 pounds, on the big side for a female wolf. Credit: Doug McLaughlin