On the Road, Photographers Revisit the American Landscape 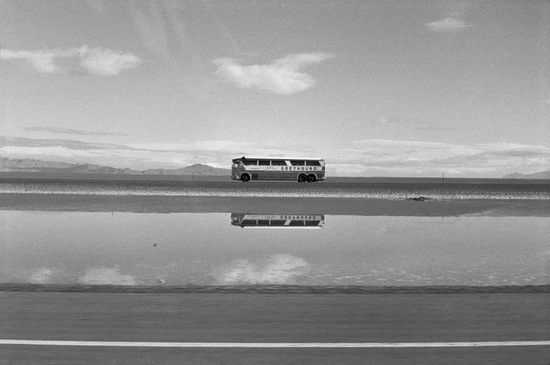 “Autolandscape, Utah,” photo by Elaine Mayes, courtesy of the Smithsonian American Art Museum. View a slide show with more photographs from the exhibit, “Landscapes in Passing.”

Elaine Mayes drove from San Francisco to Massachusetts in 1971 to document the American landscape. Against conventional practices, she photographed the changing view outside from inside her car.

She snapped the camera shutter as she moved through mountain ranges and valleys, city centers and vast plains. She had no agenda but to capture a constantly moving and changing America.

Mayes, along with photographers Robbert Flick and Steve Fitch, are featured in the Smithsonian American Art Museum’s new exhibit, “Landscapes In Passing,” which aims to capture the experience of seeing America while on the road.

While all three artists share “everyday America” as their subject, their styles are distinctive, reflecting their personal experiences encountering the American landscape. Mayes focused on changing scenery on the interstate highway, Fitch on the culture of roadside attractions and Flick on the segmented way we experience a city.

Curator Lisa Hostetler hopes this exhibit challenges conventional ways of seeing America. No longer the 19th century portrayal of untrammeled wilderness that was overwhelming, majestic and sublime, these photographers found and displayed a gritty, inhabited nation. The interstate highway cuts through the country. Flashing motel signs sit against the backdrop of mountain ranges.

“They’re taking off the rose-colored glasses and looking at the reality of the road,” said Hostetler.


View more photos from the photography exhibit, “Landscapes in Passing,” on display at the Smithsonian American Art Museum.

Growing up, Fitch took road trips with his family from Northern California to South Dakota to visit his aunts, uncles and cousins. In college, he read Jack Kerouac’s “On The Road” and listened to Bob Dylan. It all inspired him to start photographing roadside attractions — trucks, rest stops, billboards.

He said he saw the highway “from the perspective of a kid where everything was exciting and interesting.” The journey was just as important as the destination.

For Fitch, sometimes the road at night was more exciting than during the day: the bright neon signs that can been seen from a mile away in the dark. As mom-and-pop spots were replaced by chain hotels and gas station, and as air travel replaced driving as the dominant mode of coast to coast travel, Fitch said that many Americans today lost the experience of exploration in a road trip journey.

If these photographers challenged conventional depictions of American landscape, they also played with the medium of photography. Trusting her instinct and experiences, Mayes sometimes took photos without looking through the camera. When Flick documented Los Angeles in the late 1970s, he looked for a new way to capture the city that had been built on photographing itself. He took multiple photos of one street, and laid them adjacent to each other on a 10×10 photo grid.

“The notion of the individual photograph was really a problem because it had been exhausted,” Flick said.

Most Los Angeles residents see the city by driving through it. With the grid, Flick simulates the experience of viewing the city from a car, piecing it together a segment at a time.

Flick said that challenging conventional practices of photography is something the three artists have in common.

“We went from looking at a subject matter, to photography becoming a subject,” said Flick.

“The exhibit shows how photography is a malleable medium. It’s all about who’s behind the camera and how they see the world,” said Hostetler. “Reality is observed by individuals with visual proclivities and different things to say.”

Hostetler said she hopes that exhibit will make people more conscious of how they move through the world, and what they’re missing as they pass it.