A poem for Flint, four years after the water crisis began

Barely an hour’s drive from poet Tarfia Faizullah’s home in Michigan, the citizens of Flint were exposed for two years to high levels of toxic lead in their drinking water. Among those affected were between 6,000 to 12,000 children, who are particularly susceptible to the irreversible effects. 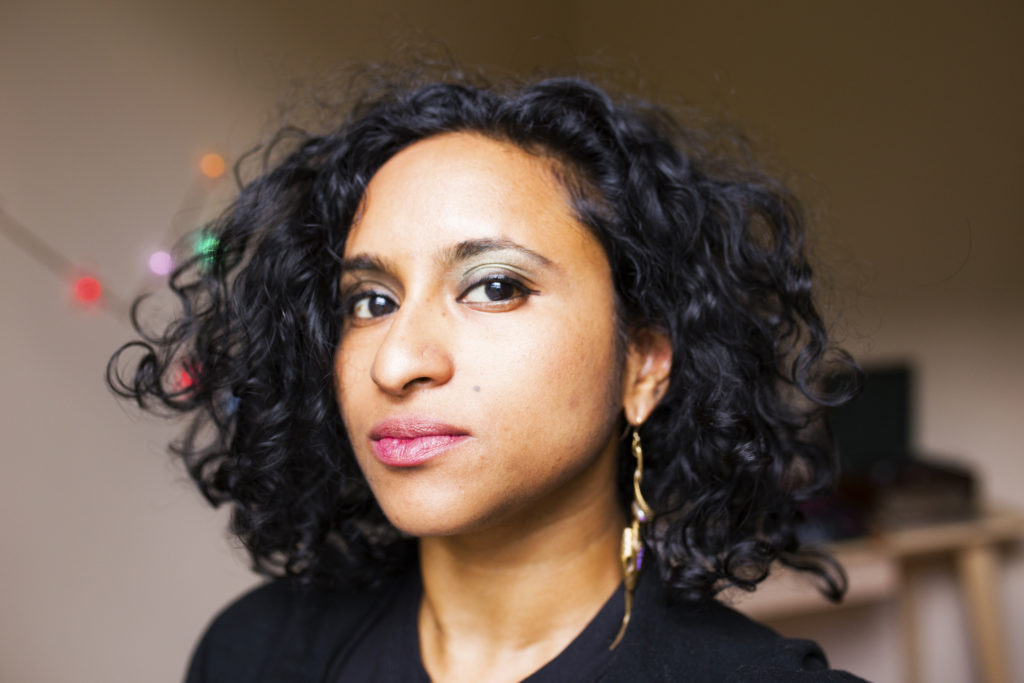 In Faizullah’s “I Told the Water,” she examines how water is both essential to life and often overlooked. It’s part of her latest poetry collection, “Registers of Illuminated Villages,” a book 15 years in the making that shines a light on “the invisible, but tangible,” she said.

“I was thinking about things like helplessness and poverty and allocation of resources and how we can simultaneously sort of take something like water for granted,” she said. “Even if you consume something like water, you have no idea necessarily what its contents are or what [it] is going to do to you.”

In April 2014, city officials switched the source of Flint’s water supply from the Detroit Water and Sewerage Department over to the Flint River to cut costs. Due to improper water treatment and natural corrosion from old pipes , Flint’s water supply was exposed to heavy levels of lead contamination.

In addition, a legionella outbreak (also known as legionnaires’ disease) from the contaminated water supply killed 12 people. As a result of the crisis, 15 city officials were charged with criminal offenses, some for involuntary manslaughter. 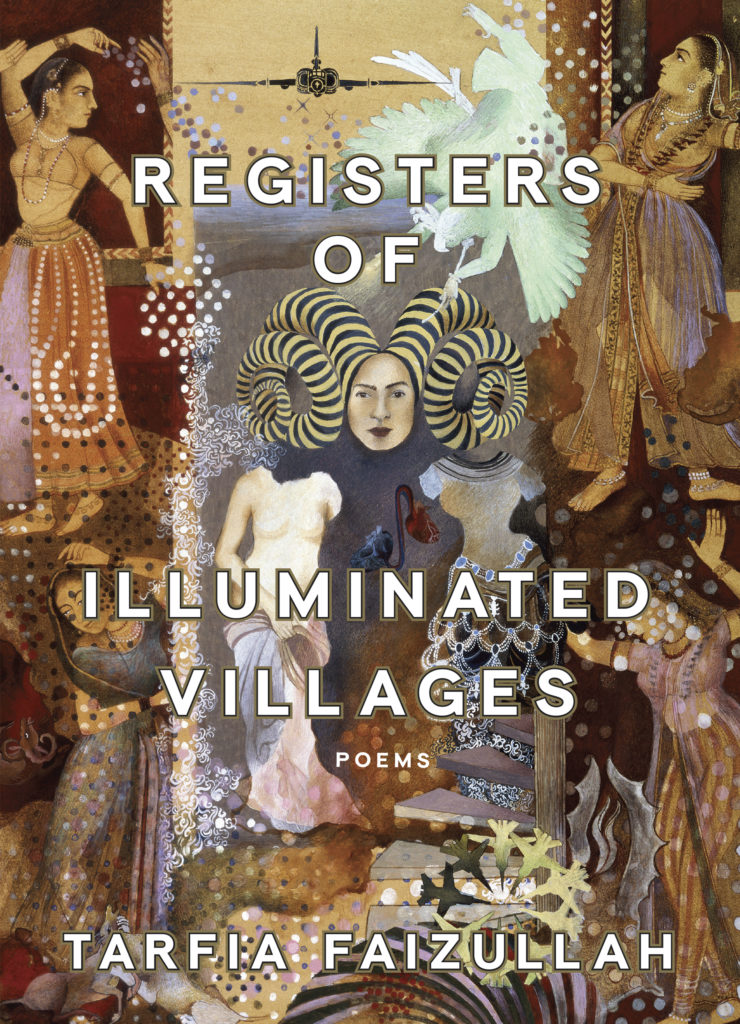 It’s been four years since Flint’s crisis began, and some residents still live without access to potable water, and the water at some schools still tests above the federal threshold some of the time. To provide students and others bottled water, the state of Michigan currently shells out $22,000 a day.

Faizullah, a second-generation Bangladeshi, said her interest in water and the allocation of essential resources is “obsessive,” and draws inspiration from Bangladesh’s own struggle with water. Millions are currently water insecure, and research conducted by World Bank predicts that climate change will decrease the country’s already scarce clean water supply.

Her poem “I Told the Water” brings water to life and unpacks its role in our lives — as mirror, life-giver and sometimes a villain.

Faizullah sees this as the power of poetry, from which readers can “walk away from the interaction having a greater understanding of your relationship to an element that you live beside and among.” 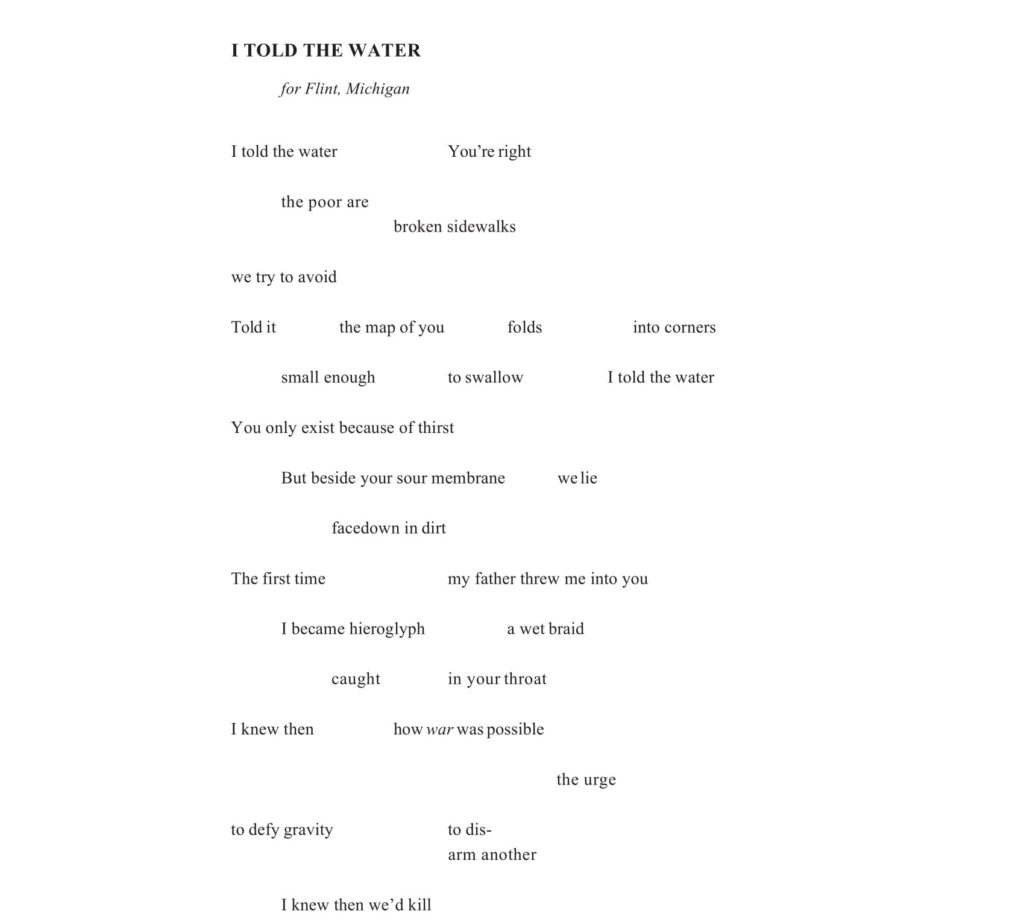 Listen to Faizullah’s “I Told the Water” from the 2014 Bread Loaf Writers’ Conference below.

“I Told the Water,” from Registers of Illuminated Villages, copyright © 2018 by Tarfia Faizullah. Reprinted by permission of Graywolf Press. All rights reserved. www.graywolfpress.org

Bangladeshi American poet Tarfia Faizullah grew up in Midland, Texas. She earned an MFA from the Virginia Commonwealth University program in creative writing. Her first book, Seam (2014), won the Crab Orchard Series in Poetry First Book Award. A Kundiman fellow, she lives in Detroit where she teaches at the University of Michigan and is an editor for the Asian American Literary Review and Organic Weapon Arts Chapbook Series. Her second book is Registers of Illuminated Villages (Graywolf Press, 2018).