The all-American essence of Kansas, Camaros and ‘Jennifer’

The Jennifer Century
America! Give to me your 200 years
of names borrowed from the Bible. Anyone
can be a Mary. Australians. A Canadian.
Take instead the all-American sound
of Jennifer. Feel how it Kansases
in your mouth, a flat rectangle of democracy.
Notice in it the guttural yearn,
primal urge for curds, conspicuous consumption
of the doubled-n. Leave for the limeys
their Guinevere, to the Cornish Gwenhwyfar,
the origin stories too. America
did not rise, enfogged, from a lake,
was not pulled from a stone by a king.
We emerged from the stocked shelves
of Spencer’s Gifts and More,
from the aisle of black lights and St. Patrick’s Day
shirts festooned with “I’m So Irish, My Liver Hurts”
and “Erin Go Braless.” Give to our Jennifers
the American J, so goddamned unique
the Commies have nothing like it
and which the French mispronounce.
O beautiful Jennifers, for spacious Camaros,
for amber waves of perms. May you crack
your gum forever, the canyons and forests
and food courts echoing with its snap,
Haileys and Kaylees circling the edges,
watching for the moment your fringed jackets drop
to paw the ground and pounce

“First, you are laughing. Then there is a knife.” That’s how a fellow poet once described the work of poet Erin Adair-Hodges.

It’s a fitting description for “The Jennifer Century.” Adair-Hodges wrote the poem in 2014, but it reads as if in direct, irreverent dialogue with current questions and rhetoric around what makes America great. 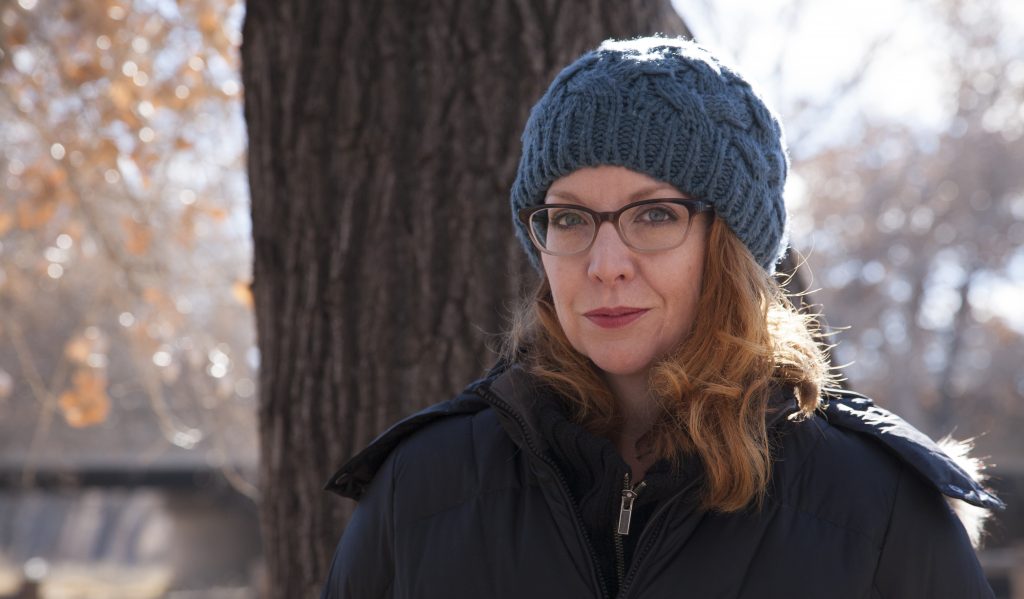 “[This poem] looks at the emptiness of American exceptionalism and concepts of our ‘greatness’ but by talking about the name Jennifer… a quintessentially American name,” said Adair-Hodges, who said the poem came out of “thinking about names as signifiers” — not just of cultures but also of specific time periods and value systems.

The title of the poem, Adair-Hodges said, is a nod to the so-called “American Century” — a term coined by Time publisher Henry Luce to describe the era of America’s sweeping influence that began in the middle of the 20th century, and continues to the present day. “I’ve always been fascinated by the term… as it implies a finiteness to our global influence and dominance,” Adair-Hodges said.

“Poetry asks that, for even a few moments, we become fully engaged.”

There is humor too. In this poem, Adair-Hodges asks us to consider that America’s origins aren’t as noble, say, as the tale of Excalibur (“America did not rise, enfogged, from a lake”). Instead, she suggests that perhaps we are born more out of capitalism (the shelves of Spencer’s Gifts), borrowed holidays (“I’m So Irish, My Liver Hurts”) and the ephemeral trends of our decades (big perms, cracking gum, Camaros).

Adair-Hodges said her work is not necessarily political, but always “motivated by a sense of urgency.” For eight years, she left poetry, but came back to it after suffering from postpartum depression following her son’s birth. The depression became anxiety, which led to a desire to regain control and find meaning again through writing.

It is the responsibility of the poet, she said, to force people to slow down and think in an era of speed and multi-tasking. “The actual physical act of reading requires so much investment and attention that it cannot be done apathetically,” she said. “Poetry asks that, for even a few moments, we become fully engaged.”

Listen to Adair-Hodges’ read “The Jennifer Century” below.

This poem first appeared in the literary journal Boulevard.

Erin Adair-Hodges’ first book, “Let’s All Die Happy,” which is forthcoming with the University of Pittsburgh Press, won the 2016 Agnes Lynch Starrett Poetry Prize. She is a Bread Loaf-Rona Jaffe Foundation Scholar in Poetry and winner of the 2014 Loraine Williams Prize from The Georgia Review.  Her work can be seen in Green Mountains Review, Kenyon Review, The Pinch, and more. She teaches writing in Albuquerque, New Mexico.

Left: A girl walks past a house painted in the colors of the U.S. flag in Moneygall, Ireland. Photo by REUTERS/Cathal McNaughton