In poet John Keats’ letters, a man full of life just before he died

Romantic poet John Keats is best known for his odes, epics and sonnets. But in his short lifetime he also wrote dozens of letters to siblings and friends, which are now surfacing together online for the first time, 200 years after they were written, though an effort called the The Keats Letters Project.

Keats penned the letters between 1815 and 1821, the year he died, at the age of 25. In his letters, Keats wrote to his brothers George and Tom about daily life, discussed poetry with friend Benjamin Bailey and later expressed his love to the young Fanny Brawne.

The letters show Keats “as a young man about town, writing poetry, living life and full of excitement and ambition,” said Brian Rejack, a professor of English at Illinois State University, one of six scholars who collaborated on this project. “He’s very busy in these early letters and we try to capture Keats’ life … without having these reminders that he is going to die.” 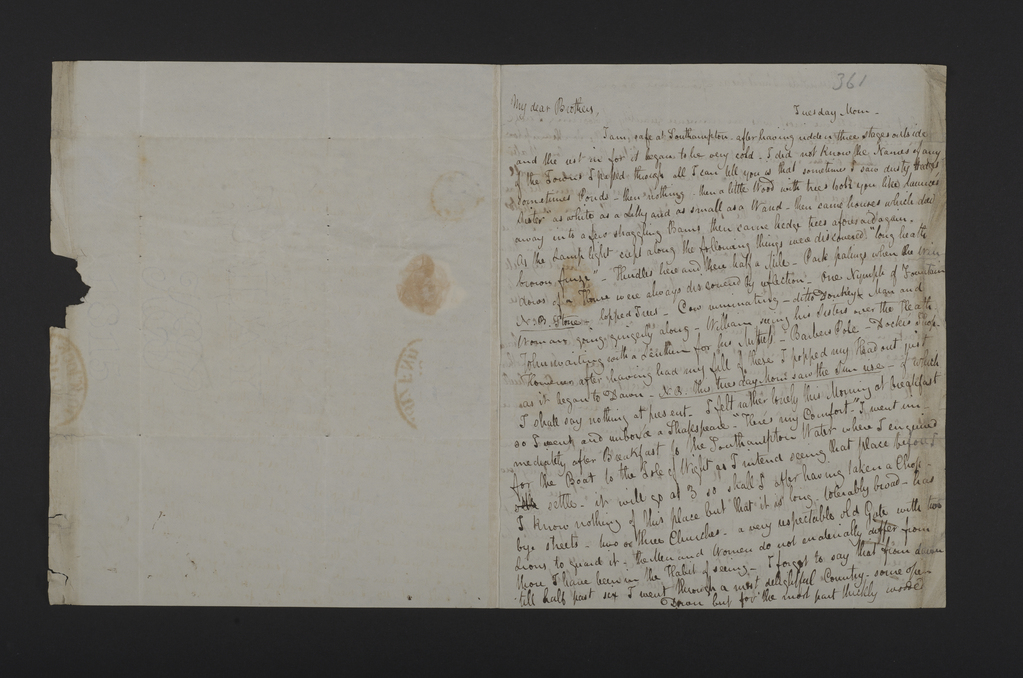 Keats, who did not formally study as a poet, but instead trained as an apothecary, published his first poem in 1816 at the age of 20. He turned to poetry as a personal refuge from his medical work and the deaths of his parents and brother Tom, whom he writes to in his letters. His work drew elements and style from the great poets of the time and from his friend, the poet Leigh Hunt. But Keats made little money and died before his poetry became famous.

So far, the Keats Letters Project has put up 35 of the poet’s 252 letters and will continue to publish more over the next three years, along with his poetry and letters from his family and friends.

“The letters are a great place to see him as a joyous young man,” Rejack said, “in addition to the somber person shown in a lot of his poetry.”

Although I was first wooed by Keats’ more moody and broody “Ode to a Nightingale,” I’ve come to love “To Autumn” more and more as I get older. There’s a precise economy of language in the poem, and it’s subtle and suggestive. Nothing even really happens in the poem. It’s just three stanzas opening out onto the world of autumn, first with its richness (ripe apples, plump kernels, bee hives overflowing with honey), then a second stanza that gives us a personified Autumn ( lazily lounging around) and a final stanza that simply asks us to listen to the symphony of the Autumn world.

The Romantic poet Samuel Taylor Coleridge claimed to have predicted John Keats’ death almost two years before it happened. The two poets met then on Hampstead Heath, in the north of London. Afterwards, Coleridge remarked of his young contemporary: “There is death in that hand.” I always think about that story when I read this short Keats lyric. It’s really delightfully creepy—the image of a disembodied, dead hand floating around one’s dreams, yet being proffered by with a gentle smile. Do we dare shake this hand, knowing what Coleridge could only anticipate? But it’s also a clever pun on the idea of a “hand” as handwriting; the “warm and capable” object held out to us is also the poetry itself, endlessly reaching itself towards us and perhaps awakening our own desires to reanimate the dead.

While perhaps not his most accomplished poem, “Give Me Women Wine and Snuff” – a poem originally scribbled on the cover of a fellow student’s notebook — is a work for which I have a particular affection. . Many of our ideas about Keats are overshadowed by what we know about his tragically early death. Keats seems to be forever cemented in the imagination as the pale poet, fainting wanly on the couch, in permanent ill health. “Give Me Women Wine and Snuff” is a reminder that he was at times hearty and robust with an irreverent vigor and sharp wit – qualities that are everywhere on display in his letters. And when you start looking, you can see this vitality in his later, more celebrated poems, too. Yes, Keats is a poet who contemplated the relations between beauty, truth, experience, and the imagination with profound insight and seriousness, but he wasn’t above calling for a draught of vintage when he needed one.

I’ve long thought that Keats and his contemporaries have a lot to teach us about living with illnesses and disabilities. During Keats lifetime, “melancholy” was a medical diagnosis not far from what we’d now call “depression”, and in a sense, “Ode on Melancholy” offers us a kind of alternate, non-medical treatment plan for the condition. Keats’ speaker doesn’t tell us to cultivate melancholy, but he does describe how, if a “melancholy fit” happens to “fall” upon us, the experience can make our world richer and more beautiful. As we in the 21st century look to medicine to diagnose and treat us, we would do well to remember that medicine doesn’t provide the only way–or even the best way–to think about our states of body and mind. And as Keats reminds us, even when a condition involves mental or physical pain, it also can make our lives more meaningful.

Some of the wonders of the world—sunrise and sunset, the ocean, the full moon glimpsed between clouds—are readily apparent, obviously sublime. Some, however, are so fundamental, so interwoven with our experience, that they can be difficult to perceive or to consciously feel—unless we are estranged from them, and so allowed perspective on them. In the seaside resort town of Margate, Keats wrote at least two poems to his younger brother. (The other can be read here.) Here, Keats uses the sonnet form for a moving ode about the connection of siblings.

Though Keats has always stood to me for the sensuality of his poetry, this poem shows Keats thinking about what it means to go on new adventures in life, poetic and otherwise. While my students often don’t think about Romantic poetry being a genre of accessibility, with its rhymes and iambs and other terms they sometimes feel afraid they cannot master, Keats reminds us that [it] can translate experience into poetry.

The above comments have been edited for brevity and clarity.

Left: John Keats reading a book of poetry, after a portrait by Joseph Severn. (Photo by Culture Club/Getty Images)