When politics gets out of hand, turn to this poem

Since the election, prominent musicians, artists, poets and other writers have spoken out in protest of the rhetoric and proposed policies of President-elect Donald Trump. On Sunday, thousands mobilized for “Writers Resist” events across the country. But while less visible, there are also conservative writers who, often quietly, disagree.

Among them is formalist poet Michael Astrue, a recipient of the Howard Nemerov Sonnet and Richard Wilbur awards, who goes by the pen name “A.M. Juster.” Though Juster does not write overtly political poetry, politics has in many ways dominated his life.

For decades, Juster, as Michael Astrue, worked as a public servant at the highest levels, holding a position as associate counsel to two Republican presidents (Ronald Reagan and George H.W. Bush), then as general counsel to the Department of Health and Human Services, and finally as commissioner of the Social Security Administration from 2007-2013.

Until an article in the religious journal, First Things, outed him in 2010, Juster kept his life as a poet private, seeing no good outcome from publicizing it. These days, he is more open. PBS NewsHour called Juster at home in Belmont, MA, to talk about the writer and artist protests, why poets with conservative leanings are often less visible, and whether he thinks poetry can spur change.

When asked about the writer protests, Juster said it brought to mind a 1970 poem by former U.S. Poet Laureate Richard Wilbur, called “For the Student Strikers.” You can read that poem, and the conversation with Juster, below.

For the Student Strikers
By Richard Wilbur

Go talk with those who are rumored to be unlike you,
And whom, it is said, you are so unlike.
Stand on the stoops of their houses and tell them why
You are out on strike.

It is not yet time for the rock, the bullet, the blunt
Slogan that fuddles the mind toward force.
Let the new sound in our streets be the patient sound
Of your discourse.

Doors will be shut in your faces, I do not doubt.
Yet here or there, it may be, there will start,
Much as the lights blink on in a block at evening,
Changes of heart.

They are your houses; the people are not unlike you;
Talk with them, then, and let it be done
Even for the grey wife of your nightmare sheriff
And the guardsman’s son. 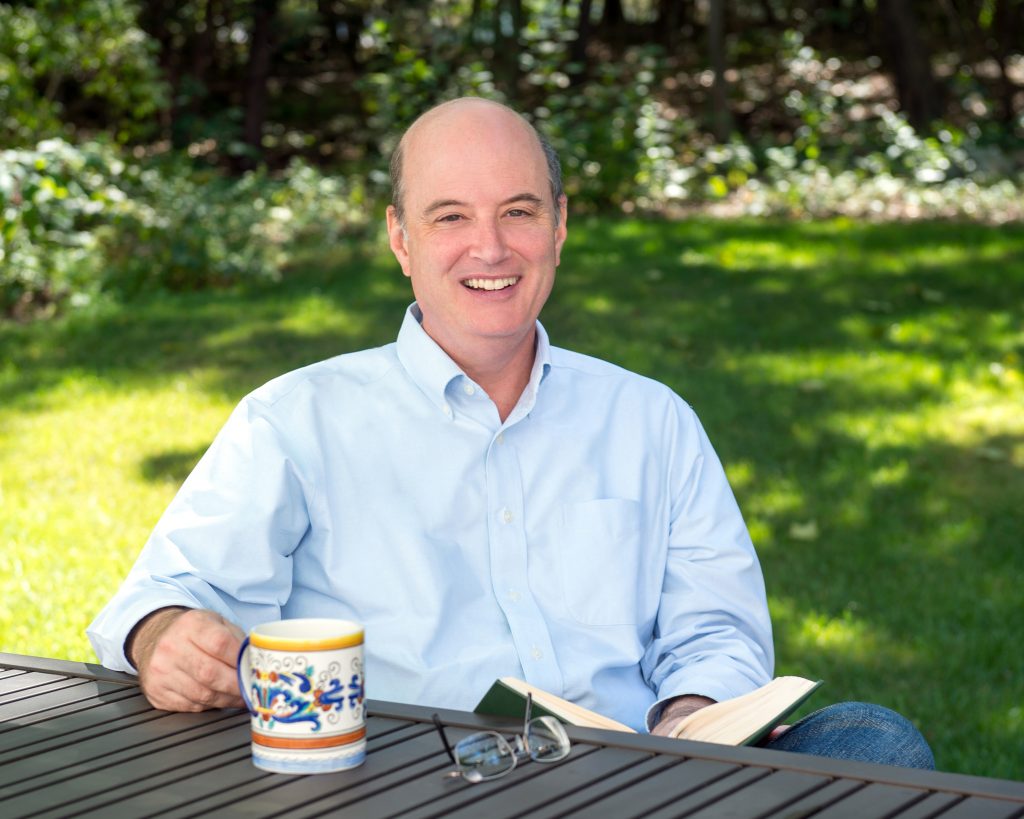 ELIZABETH FLOCK: Why the Wilbur poem? When did you first read it, and why does it resonate with you right now, as writers are protesting?

A.M. JUSTER: I think in college is when I first found this poem. It’s a poem I’ve come back to many times, having been involved in politics and government off and on for 40 years. I’ve come back to it at times when people, including me, needed to pull back, and people have to talk less violently. At different times in the election, I’ve come back to it again. I read it on the air in Boston during a particularly ugly time in the campaign. Sometime in December, I also posted it online on a poetry forum, Eratosphere. When I posted it, there was a very uncivil assault on the poem and me, and I thought, well, this is a poem about being open minded and trusting each other; this is exactly what this poem is talking about.

It’s a somber, stately poem, a little sober in its language, but it has a sense of loftiness. It’s shaped a little bit in the form of a classical sapphic. Four line stanzas, and the fourth line is half the length of the other lines. There is both a gentleness and a force to it.

It is one of my favorite poems about the political process, and from a poet I admire. Richard Wilbur is not a conservative poet. He is a poet from the far left, and he wrote it during the Vietnam era for the student strikers. The backstory is that he was asked to write a poem by one of these radical newspapers, and it wasn’t what they expected or wanted, so they crinkled it up and put it in the wastebasket. But after some consideration, they went and got it out.

It’s a poem that is a plea for patience and political civility, and not succumbing to violence that was part of the times. That violence was much more real and palpable than a lot of people realize, they were scary times.

“It’s a somber, stately poem, a little sober in its language, but it has a sense of loftiness…There is both a gentleness and a force to it.”

I’m guessing it felt to Wilbur very much like a poem of the moment in 1969, but that’s the thing about the great poems. Even though they are spurred by the circumstances of the moment, if they speak to you, then they will speak to other people again.

[Now, with the writers protests,] I think it’s a great thing that we have the First Amendment, and can express our opinions. I don’t know whether it will make much difference or not. I think they have every right to express their opinions. I guess my main concern is that I’d like to see it done with more civility and grace. I don’t think answering uncivil statements or actions with equally uncivil statements or actions is a good thing.

Poets are consumed with the outcome of this election. I’m on Twitter, and follow mostly critics, poets and editors. At some point after Trump, I noticed that the volume and intensity had started increasing very rapidly. I don’t like looking at my feed anymore, because there is so much politics and so little poetry.

ELIZABETH FLOCK: Is there a reason so few prominent poets are conservative?

A.M. JUSTER: I think part of the reason, the explanation for this, is that poetry has become much more of an academic enterprise, and the poets that become prominent and recognized and reinforce each other, are within academics. And the academy is increasingly progressive in its politics, and increasingly exclusionary. There are poets out there, actually quite a few, who are reasonably conservative in their politics, but you’re not likely to know about them.

This has been the case since at least the 70s. My original plan was to go to graduate school in English. I was a state finalist for the Rhodes and Marshall, and other fellowships. For the Danforth Fellowship, a senior Yale administrator called me into her office and told me I would have won but they had “decided that people with my politics shouldn’t become academics.” And that was with me being moderate in politics — I was a Gerald Ford Republican then. So I decided not to beat my head against the wall, and went into law and government. The bias in top academic institutions was very bad in the 70s, but it’s only gotten worse.

It’s not that there’s uniformity in the poetry community, it’s that there’s uniformity in the hierarchy. If you ask me to name somebody in the conservative poetry community who holds an academic appointment, maybe I could come up with a person, maybe. If you say, are there some terrific poets out there whose politics are conservative, I could name many. But they keep a low profile because to be conservative and a poet greatly limits the places you can get published.

ELIZABETH FLOCK: Can you name a few conservative poets you admire?

A.M. JUSTER: Jennifer Reeser is very interesting. I think she is one of the best of our Native American poets, and a translator of Ana Akmatova, who is maybe the second greatest Russian poet.Timothy Murphy in North Dakota, who is a strong Catholic and a gay libertarian. Bill Baer, who edited an anthology of conservative poets for the University of Evansville Press. Robert Crawford in New Hampshire, who won the prestigious Howard Nemerov Sonnet Award, twice.

ELIZABETH FLOCK: You used a pen name for quite some time. Why?

A.M. JUSTER: Despite being somewhat of a public person my temperament is pretty private. Back then, I felt that in government and business it wasn’t going to help me to have what people considered a frivolous activity.  Theres also a real bias in poetry against people who don’t take low paying jobs. People who have jobs and success at a high level are seen as almost disreputable. This is kind of a turn from how it used to be: T.S. Eliot was a banker, Wallace Stevens was a vice president at a pretty high level.

“To be conservative and a poet greatly limits the places you can get published.”

ELIZABETH FLOCK: Have you ever written political poetry? Do you have any desire to now?

A.M. JUSTER: Not very much. I think it’s hard to write effectively to the headlines. Probably the first successful poem I had, “Moscow Zoo,” which won the 1995 Howard Sonnet Nemerov Award, is in some sense a political poem. The poem came out of a report in the New York Times about how they were literally digging up bodies at the Moscow Zoo that no one knew were there. I found that very moving, and the opportunity for a good poem. Often a good poem can come out of something that is moving and you don’t know why. You sit down and it takes you places you didn’t expect. Sometimes you don’t have the distance and mood to write a poem, or you’re closed off from exploration. So to write a poem you have to sort of let it happen. With this poem it was more of a question of reading this and visualizing it and suddenly it became more tactile, and I kept thinking: Why are you so struck by this?

ELIZABETH FLOCK: What do you see as the role of poetry? Do you think that poetry can spur change?

A.M. JUSTER: Well, one of the things about being older, is that you start to realize that prose, particularly nonfiction prose, changes policy all the time, but fiction very rarely. Upton Sinclair’s “The Jungle” is an exception; that book changed agricultural policy, but it’s very rare.

With poetry, I can’t think of a poem that I can honestly say has changed public policy. I think very political poetry generally is going to be a disappointment to the poet. It’s hard to look back and say any poem was a really successful poem from the point of view of changing public policy.

What poetry does, is it it aims at changing people, changing the culture, and that’s part of the draw of it. It’s trying to make the world a better place, but not by any particular prescription.

As in the Wilbur poem, he’s getting people to talk to each other in a more civil way. How people see the world, how people see themselves — poetry can change those things.