This Palestinian poem on Jerusalem is finding new life

Fady Joudah memorized poems as a child, reciting stanzas in exchange for coins from his father and uncle. The poems, he would come to recognize, were by Mahmoud Darwish, a literary staple of Palestinian households.

The work of Darwish — who died in 2008 and is widely considered the preeminent modern Palestinian poet — has found new resonance since President Donald Trump’s announcement that the U.S. will move its embassy  to Jerusalem, officially recognizing the contested city as Israel’s capital. Social feeds have lit up with expressions of satisfaction and anger over the U.S. president’s decision. Many have shared Darwish’s “In Jerusalem.”

Born in a village near Galilee, Darwish spent time as an exile throughout the Middle East and Europe for much of his life. He was imprisoned in the 1960s for reading his poetry aloud while travelling from village to village without a permit. Influenced by both Arabic and Hebrew literature, Darwish was exposed to the work of Federico García Lorca and Pablo Neruda through Hebrew translations.

Darwish  “seemed to always invoke the presence of light in a dark world,” said Joudah, now an award-winning poet and the translator of “The Butterfly’s Burden,” an anthology of Darwish’s work that includes “In Jerusalem.”

The poem is full of tension, said Joudah. “The language is filled with light, filled with ethereal presence, and yet it’s incredibly grounded.”

The poem, although not religious, uses references and language from Jerusalem’s three major religions — Christianity, Islam and Judaism —  to convey feelings of inclusivity, he added. Darwish’s Jerusalem is “a place out of time,” brought quickly back to reality with the shout of a soldier at the end of piece, according to Joudah. 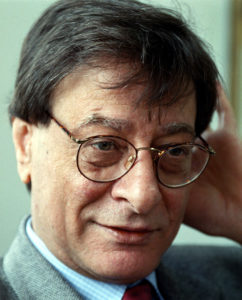 Darwish spent time as an editor of multiple periodicals and as a member of the Israeli Communist Party and the Palestinian Liberation Organization. In 1988, he wrote the Palestinian declaration of independent statehood, but quit politics after the Oslo Accords when he found himself at odds with PLO decision-making and the rise of Hamas.

To Joudah, Darwish’s work transcends political labels. Although his poetry is rooted in the Palestinian struggle, he also conveyed universal themes of humanism and irony. Darwish pushed the style of his language and developed his own lexicon, Joudah says.

Joudah’s own fourth poetry collection, “Footnotes in the Order of Disappearance,” will be released next year, and explores irony of its own in “Palestine, Texas.”

Joudah said he was fascinated by the idea that though Palestine is not recognized as a nation, the U.S. is dotted by small towns with the same name — many of which are on the verge of disappearance as their populations dwindle.

“I thought it was kind of an interesting irony, and almost a poetic recognition of Palestine, and I wanted to take that on in a work of art,” he said.

Read Darwish’s “In Jerusalem” and Joudah’s “Palestine, Texas” below.

BY MAHMOUD DARWISH
TRANSLATED BY FADY JOUDAH
In Jerusalem, and I mean within the ancient walls,
I walk from one epoch to another without a memory
to guide me. The prophets over there are sharing
the history of the holy … ascending to heaven
and returning less discouraged and melancholy, because love
and peace are holy and are coming to town.
I was walking down a slope and thinking to myself: How
do the narrators disagree over what light said about a stone?
Is it from a dimly lit stone that wars flare up?
I walk in my sleep. I stare in my sleep. I see
no one behind me. I see no one ahead of me.
All this light is for me. I walk. I become lighter. I fly
then I become another. Transfigured. Words
sprout like grass from Isaiah’s messenger
mouth: “If you don’t believe you won’t be safe.”
I walk as if I were another. And my wound a white
biblical rose. And my hands like two doves
on the cross hovering and carrying the earth.
I don’t walk, I fly, I become another,
transfigured. No place and no time. So who am I?
I am no I in ascension’s presence. But I
think to myself: Alone, the prophet Muhammad
spoke classical Arabic. “And then what?”
Then what? A woman soldier shouted:
Is that you again? Didn’t I kill you?
I said: You killed me … and I forgot, like you, to die.

“I’ve never been,” I said to my friend who’d just come back from there. “Oh, you should definitely go,” she said. “The original Palestine is in Illinois.” She went on, “A pastor was driven out by Palestine’s people and it hurt him so badly he had to rename somewhere else after it. Or maybe it goes back to a 17th century Frenchman who traveled with his vision of milk and honey, or the nut who believed in dual seeding.” “What’s that?” I asked. “That’s when an egg is fertilized by two sperm,” she said. “Is that even viable?” I asked. “It is,” she said, “on rare occasions, though nothing guarantees the longevity of the resulting twins.” She spoke like a scientist but was a professor of the humanities at heart. “Viability,” she added, “depends on the critical degree of disproportionate defect distribution for a miracle to occur. If there is life, only one twin lives.” That night we went to the movies looking for a good laugh. It was a Coen Brothers feature whose unheralded opening scene rattled off Palestine this, Palestine that and the other, it did the trick. We were granted the right to exist. It must have been there and then that my wallet slipped out of my jeans’ back pocket and under the seat. The next morning, I went back. With a flashlight that the manager had lent me I found the wallet unmoved. This was the second time in a year that I’d lost and retrieved this modern cause of sciatica in men. Months earlier it was at a lily pond I’d gone hiking to with the same previously mentioned friend. It was around twilight. Another woman, going in with her boyfriend as we were coming out, picked it up, put it in her little backpack, and weeks later texted me the photo of his kneeling and her standing with right hand over mouth, to thwart the small bird in her throat from bursting. If the bird escapes, the cord is severed, and the heart plummets. She didn’t want the sight of joy caught in her teeth. He sat his phone camera on its pod and set it in lapse mode, she wrote in her text to me. I welled up. She would become a bride and my wallet was part of the proposal. This made me a token of their bliss, though I am not sure how her fiancé might feel about my intrusion, if he would care at all. “It’s a special wallet,” I texted back. “It’s been with me for the better part of two decades ever since a good friend got it for me as a present.” “He was from Ohio,” I turned and said to my film mate who was listening to my story. “Ohio?” She seemed surprised. “Yes,” I replied quizzically. “There’s also a Palestine in Ohio,” she said. “Barely anyone lives there anymore. All of them barely towns off country roads.”

Mahmoud Darwish was born in the village of Birwa near Galilee in 1942. He is the author of more than 30 books of poetry and eight books of prose. He was the recipient of the Lannan Cultural Freedom Prize, the Lenin Peace Prize, and the Knight of Arts and Belles Lettres Medal from France. He died in Houston in 2008.

Fady Joudah is a Palestinian-American physician, poet and translator. He won the 2007 Yale Series of Younger Poets competition for his first poetry collection “The Earth in the Attic” (2008). Joudah lives with his family in Houston, and works as a physician of internal medicine at St. Luke’s Hospital.

Left: The Dome of the Rock and Jerusalem's Old City can be seen over the Israeli barrier from the Palestinian town of Abu Dis in the West Bank east of Jerusalem Photo by REUTERS/Ammar Awad