The struggle of a small Maryland church to protect a historic burial ground recently became the source of inspiration for South African poet Siki Dlanga.

Members of the Macedonia Baptist Church in Bethesda, Maryland, believe the remains of some of the first freed African Americans are still under the ground nearby. When they heard the local government wanted to turn the land into a parking garage, they protested. Officials have since temporarily halted development plans.

But while members of the church want to excavate the land, test the soil and build a museum to honor the people from the community, negotiations are currently stalled.

For Dlanga, the church’s struggle was familiar. It reminded her of tensions over land, race, and memory in South Africa.

“In Africa, we’re still also struggling with reparations, with getting land,” said Dlanga. She said the disappearance of the cemetery represented a different kind of struggle for recognition, as if the people buried there never existed.

After meeting a member of the church in 2015 through mutual friends, she wrote a poem about it, which included the lines:

“You will not commercial our graves as though we are dead… Handle our bed of death with care lest the ground you walk on revolts beneath your feet.”

Shauna Sorrells, a spokesperson for the county’s housing opportunities commission, said the county knew when it drew up design plans for the parking lot that a cemetery existed in the area, but “had no notion that there were human remains on the site.” The county passed a bill at the end of October to maintain records of burial sites for the first time.

Tucked beside large commercial and residential developments, the Macedonia church barely holds a few dozen in its chapel. The church, founded in 1920, is the last reminder that an upscale neighborhood today was once a rural community of African-Americans who purchased parcels of land after slavery was abolished. As big buildings went up, church members and historians have testimony that bulldozers moved the bodies in the graveyard and covered them with what is now a gravel parking lot and tree-lined hill.

“It’s just like it was a town, and a big gust of wind came and just leveled it to the ground,” said Harvey Matthews, who grew up in the community and has been a member of the church for 51 years. “Everything else was gone. Bulldozed away. You see all the industry out here, the buildings. All that came in. So that’s how they got rid of it. Kids [born after 1970] don’t know anything about a little black colony being here. But there was a black community here.”

By the 1960’s much of the community was gone, according to members of the church and local historians. Matthews says most of the people were poor, and when the municipality told them they had to pay thousands of dollars to run sewer pipes onto their land for modern development, many opted to sell. Now the parking lot of a Whole Foods abuts trees Matthews planted with his mother as a kid. 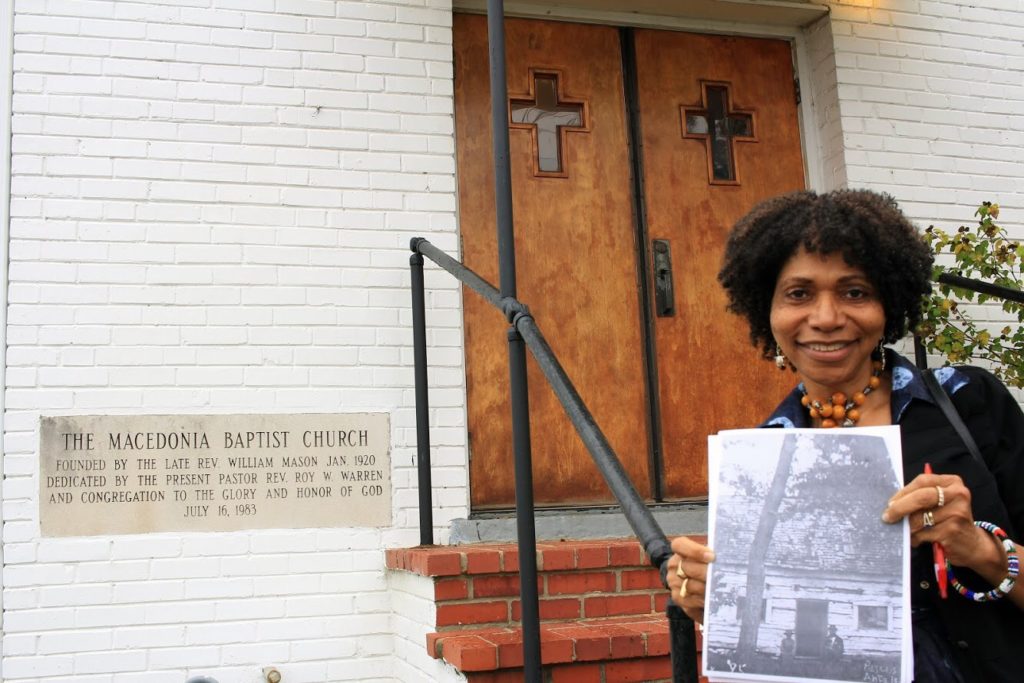 Marsha Coleman-Adebayo holds up a photo taken in 1895 of the home of Pascal Botts, which was located near the Macedonia church. Local historians have recently helped piece together the story of the community. Credit: Andrew Bossone

“His family would have gone into the future, you know, as very wealthy and prosperous people. Instead, people had to start all over again,” said Marsha Coleman-Adebayo, who heads the church’s social justice ministry. “We’re talking about inter-generational wealth in this country. And that means something in America. When you can pass down millions of dollars.”

The intersection of land ownership and race sounded familiar to Dlanga, who learned of the church’s struggle after moving to Washington, D.C. to study for a Master’s degree in political communication. She wrote the poem about the church for South African Human Rights Day, which commemorates the massacre of 69 black South African men by the apartheid government for protesting the “pass law” that restricted Black Africans and certain minorities on their own land and required them to carry passes when moving outside of it.

Since the end of apartheid in 1994, the issue of land ownership has remained highly contested in South Africa because the majority of the population is black, but most of the land is still owned by white people. Read her full poem about it below.

You will not commercial our graves as though we are dead
Handle our bed of death with care lest the ground you walk on revolts beneath your feet
Our bones though dry beneath the earth are a matter of the future
We have been waiting to be woken up from our sleep
Our business on earth is not yet done
We have been longing for an opportunity to state our case.
America shackled us but our deaths freed us.
Now, we are alive.
Like dust we were while we lived.
Now we are a hurricane of justice sweeping across this land,
We are an army and this is our final fight.
Every black life killed joins the army of witnesses to testify.
Every death is a piercing cry that rings eternally amplifying our voices.

We have no master but our Creator.
We are free to insist on justice.
Death has lost its fear factor.
Today we are ready to produce our evidence.
Our bones are title deeds.
Our voices will be a storm inside your soul.
You will hear us in your sleep.
You will smell us in your food.
You will find no peace until rightness is triumphant.
The prison walls will be silent no more as they testify against your evil deeds.
The prison gates will become gates of salvation as they free our sons from your corruption.
The system will declare that Black lives matter alive or dead,
Your bullets will tremble inside your guns
Refusing to shoot the innocent,
Black lives matter alive or dead!

Every unjust death is one more soldier added to the army.
We are the army of dry bones.
We gather by the graves.
When our peace has been disrupted, we rise.
We have made death lose its sting
Using it to amplify our lives which you think do not matter.
God’s tongue takes no pleasure in the bitter taste of our unjust deaths.
His eyes move to and fro searching for the lovers of His justice,
They will bring rest to the people – rest to the land.

Look up Just Ones and you will see the great cloud of witnesses.
Open your ears and you will hear the testimonies of the sleeping giants of Africa.
There is no loss in your cause for justice, only eternal gains.

Let the wind from God’s lips call the army of dry bones to life.
Can you not hear the rhythm of your African ancestors marching?
Can you not feel resurrection power giving life to your body?
Your sigh is a prayer for peace.
Every death is a cry for justice.
You are one step closer to a win of many generations.
The dead anticipate their victory with laughter.
Black lives matter!
The dead cannot lose.
Amandla!


Siki Dlanga is a South African poet and author of the poetry anthology “Word of Worth.” She also founded Freedom Mantle, a Christian initiative that supports emerging leaders in South Africa.

Andrew Bossone is a general assignment producer with PBS NewsHour.