A week after President Donald Trump took office, hundreds of people gathered in their homes, schools and places across the country to share stories about how they saw the state of the nation.

The story circles were organized by the U.S. Department of Art and Culture, which is not actually a government agency, but a grassroots group of artists and activists whose mission is to fill program gaps they feel the government is missing. The annual story event predates Trump. It began in 2015, as a way of responding to President Barack Obama’s State of the Union address with stories of how ordinary people felt about the state of the country. That year, race dominated the conversation as the Black Lives Matter movement took hold. This year, Adam Horowitz, who calls himself the department’s “chief instigator,” said the recurring theme was “belonging and disbelonging.”

“The question of belonging hit me very hard today,” began one story from “Shelle” in Albuquerque, New Mexico, who said her children were biracial. “My seventeen-year-old son got up after a long night of election results … and he says to all of us …‘Let’s all share our biggest fears this morning after this election!’ He says he’ll go first. ‘I’m most afraid of national Stop and Frisk,’ [he said]. No one said anything for a full minute – what could we say?”

Another story, from “Hakim,” also in New Mexico, began differently: “On belonging … I’m a black male in NM. As of 2010 Census NM had a 2 percent black population. And I feel like I belong here.”

While many of this year’s stories seem critical of President Trump and the country’s general political climate, Horowitz said they also reflected different perspectives. “When we got notes back, we heard from a number of people that this was the first time they had a bipartisan conversation that they didn’t think would be possible,” he said.

As Trump prepares to deliver his first address to a joint session of Congress on Tuesday, a group of poets are turning these varied stories into songs, sonnets and poems. That work will be read in a “Poetic Address to the Nation” on March 11 at the Yerba Buena Center for the Arts in San Francisco, California. It will also streamed online.

Among the participating poets are Chinaka Hodge, whose withering poem “What will you tell your daughters about 2016?” was an October Ted Talk, Luis Javier Rodriguez, a Chicano poet who previously served as the Los Angeles Poet Laureate, and Bob Holman, a spoken word poet who has promoted poetry so thoroughly throughout his career that public intellectual Henry Louis Gates Jr. once described him as having done “more to bring poetry to cafes and bars than anyone since [Lawrence] Ferlinghetti.”

Holman said to him, a poet is a “civic worker” — and long has been. He cites the passing of the 1973 Comprehensive Employment and Training Act, which put unemployed workers — many of them artists — to work in public service. Holman was one of those artists. “It was there that I discovered that at every community site that I worked for, whether it was a veterans’ center, nonprofit, or senior center, there was a use for poetry,” he said.

And he believes that using everyday people’s stories to create a “Poetic Address to the Nation” is a natural extension of that idea. “This [event] wants to be the pure poetry of the people, from the grassroots up,” he said, instead of being “words being delivered on high,” as in a president’s State of the Union or address to a joint session of Congress.

“It’s time to listen to what the people are saying,” he said.

Holman is writing two poems for the event. He will deliver both in his trademark spoken word style, which he helped bring to the masses through the Bowery Poetry Club, Nuyorican Poets Cafe and St. Mark’s Poetry Project, all in New York City.

One of his poems is a sonnet written from the stories told in the story circles, while the second, “FREEDOM,” is a poem based on his own feelings about the election.

That poem’s first line: “FREEDOM to put lima beans and black-eyed peas together,” reveals the humor, imagination and metaphor with which Holman often writes. Its second line: “FREEDOM to take off BB King’s watch,” is a reference to the way the legendary blues musician used to play: When King looked at his watch, said Holman, who is a big fan of King’s, it meant he’d only play for 45 minutes; if he didn’t, he could go on for hours.

“When you really think of what freedom means, it is to be able to enjoy life without an arbitrary time system to tell you it’s time to wake up in the morning, or that it’s time for your brilliant [Fender] Stratocaster blues to be finished, because you’ve got to make an appointment some place,” Holman said. “It’s this kind of thinking that can lift you.”

Read “FREEDOM,” or listen to Holman read it, below: 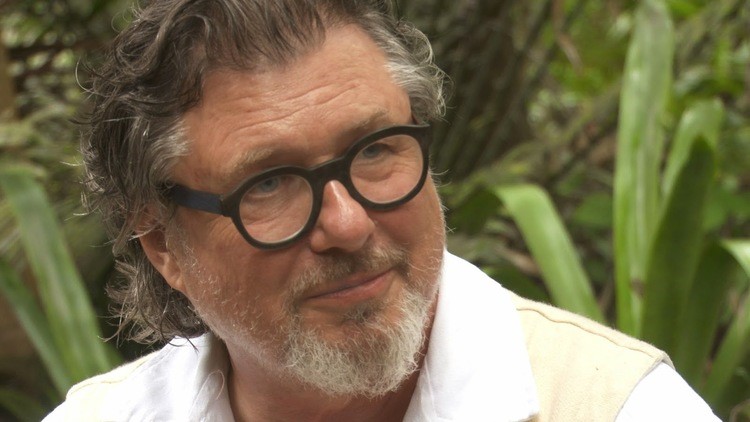 FREEDOM
Thanks to Darryl Alladice

FREEDOM to put lima beans and black-eyed peas together
FREEDOM to take off BB King’s watch
FREEDOM to shout “Let’s hit it” on every Other beat
FREEDOM to look at everybody whenever you want with a nod and a tie-yr-shoes
FREEDOM to not shut up, Ever
FREEDOM of press-ure points
FREEDOM of speech-ifyng poetics tralalalalalolotratralalalala
FREEDOM of lemonade
FREEDOM to remember what you are doing in Montana
FREEDOM to adjust the height of the floor
FREEDOM to eat an all-poetry diet
FREEDOM to not write the poem, write the Other poem
FREEDOM to the second guy from the left
FREEDOM of the f-bomb when appropriate and when inappropriate, well,
that’s up to you
FREEDOM for a march to be omnidirectional and you might not even be able to move
FREEDOM to turn off reality, and it ain’t on TV, bud
FREEDOM of Neanderthal, we all are
FREEDOM of rulers to measure backwards
FREEDOM of antique roadshow blowback
FREEDOM to sneeze with no “bless you”’s
FREEDOM to scratch somebody else’s itch
FREEDOM to go home again, again
FREEDOM to land a helicopter in the yard at Angola Prison and just see what happens
FREEDOM to knit some pink pussy ears on Trump Tower (with a mighty roar)
FREEDOM to love everybody’s body simultaneously
FREEDOM for the Freedom Riders to finally be able to get off the damn bus
FREEDOM to shout stop at the top of your lungs in the stock market: “STOP!”
FREEDOM to take a cellphone to court
FREEDOM to get back on the horse, knowing you are also the horse
FREEDOM of Omnis Animus Unam: All One Animal
FREEDOM of thoughtless behavior to reanimate itself as a suspension bridge leading to
a new consciousness that continues to invent itself until everyone crosses
over and no tolls either

Bob Holman is the Minister of Poetry and Endangered Language Protection at the United States Department of Arts and Culture (not a government agency! but should be a cabinet position). He became a public poet in 1977 when he was employed by the CETA (Comprehensive Employment and Training Act) Artists Project, the largest federally-funded artists’ job program since the WPA. Since then, he has published sixteen books, co-created “The United States of Poetry” and “Language Matters” for PBS, taught at NYU, Columbia and Princeton, and founded the Bowery Poetry Club in NYC.

Left: The 2015 'Poetic Address to the Nation.' Credit: The U.S. Department of Arts and Culture