When imagination is a child’s only refuge, ‘that’s not a happy ending’

How do children stay resilient when they’ve been victimized by forces they can’t control? Poet and professor Mia Leonin sees a necessary strength in using imagination as a means of survival.

For her latest book, “Fable of the Pack-Saddle Child,” Leonin said she didn’t want to simply write about a child, but create a child’s world, “a children’s book for adults.”

“I didn’t want to romanticize the child’s imagination, but I wanted to uplift it.”

In the book-length poem, 10-year-old Micaela lives in a Spanish-speaking city by the sea with her mother, who is romantically connected to various men in town. When the girl is sexually assaulted by one of her mother’s lovers, “the Actor,” Micaela loses herself in her own thoughts, drawn obsessively to the tilde on top of the Spanish letter “Ñ.”

Leonin says her protagonist is very average, but “not cared for in the way that we like to imagine children are cared for,” she said. “I think it’s the case of many children, that they’re sort of hidden in plain sight.”

Micaela’s world is structured according to certain stylistic parameters, according to Leonin. Passages centered on adults are written in prose style, and Micaela’s lines are often in stanzas. Only adults who befriend Micaela are given names — her mother is not one of them.

Micaela thinks mother and daughter.
She draws ñ after ñ. The dip
and squiggle of her pencil comforts her.

Like the nights her mother would come home
in a cloud of jasmine and champagne bubbles.
She would climb into Micaela’s bed and hold her, molding

Micaela’s small body into her long one
as if she were a doll placed high
on a shelf for safekeeping.

She initially wrote the tale in the first-person voice of Micaela’s mother, but realized Micaela herself was the missing link, and most important voice, of the narrative. Once she started imagining the girl’s world, the rest “came tumbling out,” the author said. 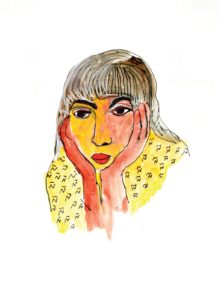 The power of a child’s imagination to transcend difficult circumstances would all be for naught without people helping along the way, she said. She’s always found the adage “picking yourself up by the bootstraps” misleading.

“Imagination doesn’t fill your belly and it doesn’t give you the safety that you need,” Leonin said of Micaela’s world. “We need help from other people to survive, so I didn’t want to romanticize the child’s imagination, but I wanted to uplift it.”

Read passages, with accompanying illustrations by Neredia García Ferraz, below:

“Fable of the Pack-Saddle Child”
BY MIA LEONIN

One street over, Micaela walks to school.
She clutches her satchel and comb. She reaches
into her skirt pocket to pinch her lucky opal. 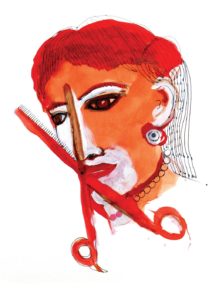 Micaela is a ten-year-old of a few miracles:
She can point to a bird and balance a passing plane on her finger.
She’s fluent in cat talk and the sign language of trees.
She thinks she can stop her heart by holding her breath.

Micaela’s mother’s black eyes and hair sparkle when she speaks. Her aquiline nose protrudes unabashedly and big, strong teeth crowd her mouth, giving her the curious beauty of a mare. She possesses few unusual or exceptional talents. She can brew liquor on the stove and from that, whip up an ice cream that requires no churning. She owns one pair of scissors, and, with one blade, she can shave a man’s face, poke a hole in a cloudy day, and whistle the “Ave María” through the blade and piece of paper. All of this she can do with one blade.

Tengo mi manera, Micaela’s mother has a way about her. She says so herself, smiling so broadly her red lipstick leaves a half-moon smudge on her front left tooth. 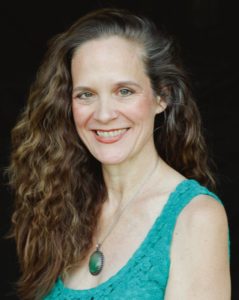 Reprinted by permission from The Fable of the Pack-Saddle Child (BkMk Press, University of Missouri-Kansas City, 2018). Copyright © 2018 by Mia Leonin

Mia Leonin is the author of four poetry collections: Fable of the Pack-Saddle Child (BkMk Press), Chance Born, Unraveling the Bed, and Braid (Anhinga Press), and a memoir, Havana and Other Missing Fathers (University of Arizona Press). Leonin has published poetry and creative nonfiction in New Letters, Prairie Schooner, Guernica,Indiana Review, Witness, North American Review, and others. She teaches creative writing at the University of Miami in Coral Gables, Florida.

Left: Illustration by Neredia García Ferraz from “Fable of the Pack-Saddle Child”