As ‘writers resist’ Trump, an interview with a poet in protest

On Sunday, thousands of writers and artists rallied across the country in defense of freedom of speech and to protest the political discourse of President-elect Donald Trump. Their mission, according to organizers, was to “send a message to an incoming presidential administration that has laid bare its hostility toward the press and other free expression norms.”

The main event, held on the steps of the New York Public Library in New York City, was organized by PEN America, a nonprofit that works to defend freedom of expression. There, authors Jacqueline Woodson and Andrew Solomon, singer-songwriter Rosanne Cash, playwright and activist Eve Ensler, and poets Rita Dove, Robert Pinsky, and Monica Youn, and other writers, delivered readings and performances. Other Writers Resist events took place in Tuscaloosa, Fresno, Helena, Denver, Chicago, Baltimore, and Washington D.C., among other locations.

Youn read her poem, “A GUIDE TO USAGE: MINE,” which she wrote in response to the election. She recently shared that poem with the PBS NewsHour, and also spoke to arts correspondent Jeffrey Brown in a series of emails. You can read her poem and that email conversation below. 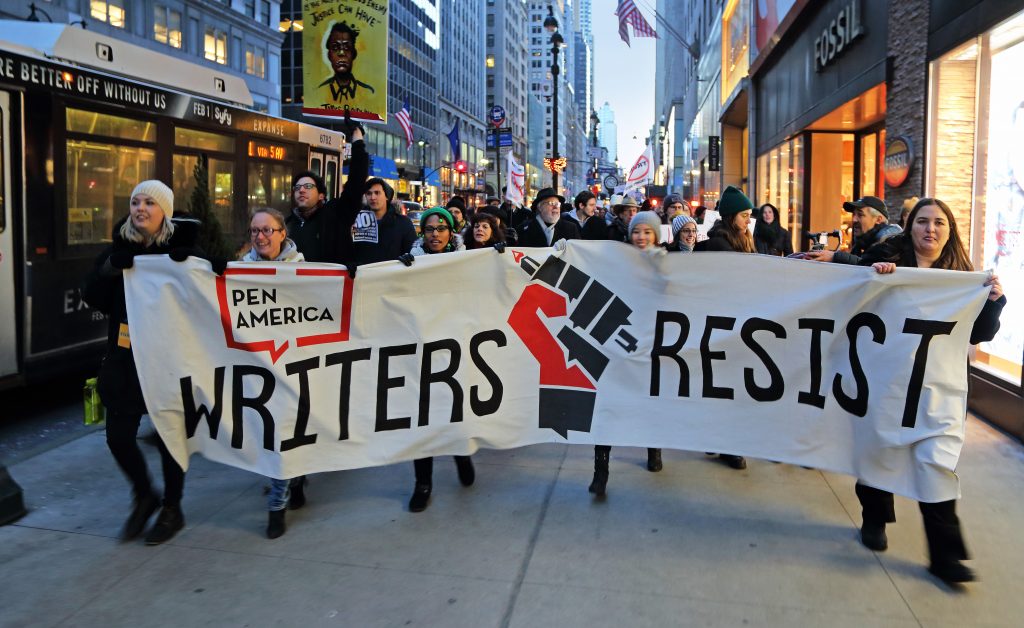 A GUIDE TO USAGE: MINE

A pit or tunnel in

the earth
from which
precious

stones or ores or coal
are taken

by digging
or by other methods.

to explode
when stepped upon
or touched,

or when approached
by a ship, vehicle,

To dig
away or otherwise remove

the substratum
or foundation
of.

To sap.
To ruin

by slow degrees or secret means. 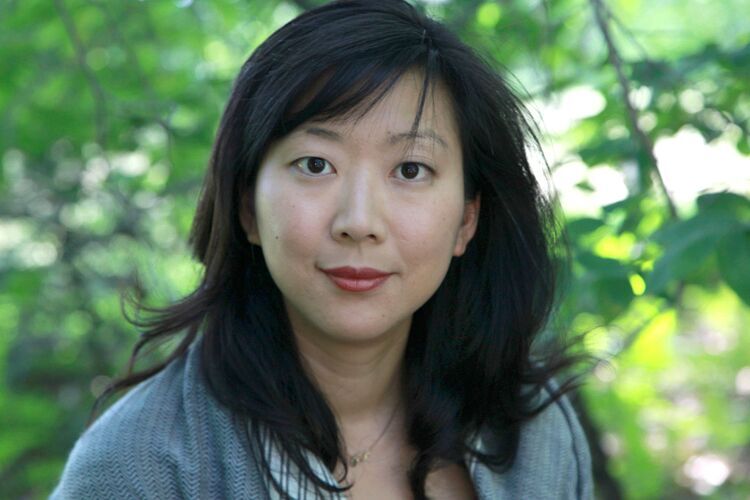 JEFFREY BROWN: Tell me first about the poem: I understand it was a commission — is that unusual for you? How did it come about, and why did you want to take it on?

MONICA YOUN: In response to the election, The Boston Review is publishing a chapbook of 40 poems on political disaster — 20 new and 20 previously published, with a forward by U.S. Poet Laureate Juan Felipe Herrera, a man for whom I have boundless respect. They reached out to me in late November to contribute a poem. I also read the poem at the Writers Resist rally at the New York Public Library, organized by Erin Belieu and sponsored by PEN America.

I’d never written a poem on commission, much less one in response to current events (except for a one-off effort as the daily NewsPoet for NPR’s All Things Considered, which was more an exercise than a serious poem). My work is certainly political — among other topics my most recent book of poems Blackacre traces the stigma surrounding female infertility back to our system of inherited property, and outlines the slippery slope from nursery comforts to racial hierarchy. But I’m not used to responding to particular current events — especially one so new, so raw, and so huge.

But I felt that I’ve allowed myself to get a little too fastidious — too comfortable in my comfort zone. Don’t get me wrong — even the most navel-gazing, most abstruse artistic work has inherent political value. If we allow political exigency to supercede the difficult, the nuanced, the individualistic, then the enemies of truth have already won. But I think that poets practice certain skills that we bring to the fray — skills involving the analysis and strategic deployment of language. For me, adopting a more public voice is something concrete that I can contribute to the pushback against the incoming administration, along with phone calls, donations, protests and other more direct forms of political activism. I’ll be interested to see how my more public voice changes and educates my more personal, lyric modes of writing.

JEFFREY BROWN: Was the process of writing a commission different from your usual approach to writing poetry?

MONICA YOUN: Mostly it was different because it didn’t allow me to turn away from a subject that terrified, confused, enraged and exhausted me. As with many of my friends, my reaction to the election has gone through various phases — numb despair, frantic activism, desperate avoidance. Every morning I would wake up in a panic over a different priority — refugees, immigration, global conflict, race relations, climate change, economic justice, reproductive rights, queer identity, constitutional safeguards. But the poetry commission forced me to look for a handle, an angle or perspective on what seemed all-encompassing.

Also, just as a matter of time, three weeks is a very short fuse for me to go from conceptualizing a poem to a completed draft. Usually, once I’ve decided to write something in a particular way, I start gathering material and adding it to the pot — like supersaturating a solution. Not until I sense that the poem is ready to precipitate out — usually months or years later — do I sit down and try to write it. This time, I didn’t have that luxury — given the end-of-semester and holiday rush, as well as an increased burden of political activism, I only had two free afternoons in which to write the poem. I had decided on the “mine” concept several days earlier, but I was on the clock to complete two sections per day. And I finished the draft only 15 minutes before I submitted it, before I had a chance to let it sit for a while or to solicit feedback.

“As a poet, my political work has been more critical, more interested in exposing how deeply rooted our inequities, inhibitions, and malignancies may be.”

JEFFREY BROWN: “Gathering material and adding it to the pot.” Gathering how – as in ‘research’? Material from where? I’m interested here in the construction of your poems. And then: why is a poem the best or right way to put across this ‘material’?

MONICA YOUN: I don’t know if I’d dignify what I did here with as serious a term as “research.” More just a kind of rooting around. In this poem I started with the definitions and etymology of the word “mine,” of course, and then did about an hour’s worth of on-line research into strip-mining procedures, the construction of landmines, and the history of military sappers. Usually I’d let this process play out a little longer, get a little farther flung, but this time I was on the clock.

I wouldn’t think that a poem – or any other mode of persuasion — is ever necessarily “the best or right way to put across” an argument or point of view. As a lawyer and poet, I’ve written legal briefs, congressional testimony, cable news talking points, op-eds, speeches, letters, law review articles, essays, blog posts, and tweets. And poems, of course. Each genre has its own norms of persuasion, its intended audience, and its means of dissemination, and anyone who considers herself an advocate – whether poet, lawyer, or citizen – would be silly to limit herself to just one means.

What makes this particular “material” – an interrelated series of catastrophes snowballing in the wake of this election – appropriate for a poem, rather than another genre, is its mode of persuasion: a logic that relies as much on sonics as on sense. I’ve always been an etymology geek, and etymologically speaking, the multiple definitions of the word “mine” are pure coincidence – a Germanic possessive pronoun and a Latinate word for ore or metal that, as English evolved, came to sound the same and to be spelled the same.

As a lawyer, I could never use this similarity as the main driver of an argument that we should think of the acquisitive, exclusionary impulse as the common denominator for environmental depredation, military technology, and societal disintegration. As a lawyer, the historical fiction of the etymology would be fatal to its force: for lawyers, historical roots are not mere provenance, they are precedent – what conveys legitimacy to the sovereign state’s exercise of power.

But poets (and politicians) are more attuned to the non-semantic shadows cast by language – the echoes and resonances of particular words that have persuasive force beyond the level of truth or falsity. My former boss had been President Clinton’s chief speechwriter, and we had terrific conversations analyzing, for instance, the prosody of Lincoln’s second inaugural address. Engaging the nonrational aspects of language allows persuasion to slip past the defenses of the rational mind, to take effect at the level of emotion or sensation.

JEFFREY BROWN: This poem seems to posit the kind of public / private split you speak of – “the boundary between mine and not-mine”, the various meanings of ‘mine’, and more. You even wonder at the end whether to “pledge my allegiance to unearthing or earth.” If I’m reading this correctly, it makes me wonder if you feel, or how much you feel, this duality in your own life, the various ‘hats’ you’ve worn as lawyer and poet? And to what extent this determines your view of the role of poetry today.

MONICA YOUN: I left the dichotomy between “unearthing” and “earth” open-ended because I wanted readers to be able to apply this duality to their own experiences. But for me, as you point out, the distinction maps onto the various roles I’ve played and my strategies for moving forward at this point in our political reality and in my own life. As an election lawyer and activist, I was very much the pragmatist policy wonk – pushing for incremental change where wholesale reform appeared infeasible. But as a poet, my political work has been more critical, more interested in exposing how deeply rooted our inequities, inhibitions, and malignancies may be. And I’ve seen many of my peers follow different paths in the wake of this election: some argue that we must do all that we can to ameliorate the situation and to work for change within the parameters of the existing system; others claim that the foundations of the republic are so flawed, its institutions so corrupt, that critique is the only ethically and aesthetically feasible response.

I don’t think I have a better sense of “the role of poetry” after the election than I ever have had – I don’t feel that I have the right to speak for other artists or activists, only to consider my own imperatives. I know that personally, in the immediate aftermath of the election, I had an reflexive distrust of any form of comfort – a sci-fi novel, a glass of wine, cuddling my baby son – all of it felt like a drug, like irresponsible escapism enabled by privilege. But I can hardly extrapolate from my personal sense of culpability to a societal prescription – certainly science fiction, chardonnay, and snuggly babies should continue to exist. And the same goes for poetry – to devalue the beautiful, the recondite, the introspective would be to lose sight of what we are fighting for in the first place.

Even as our post-election landscape offers the opportunity and the necessity to deepen and broaden our modes of engagement as citizens, it offers us a similar imperative to rethink and retool our practices as poets. But I couldn’t tell you now what form that will take for me, much less what form it should take for others.

MONICA YOUN: Thank you for offering an outlet to me and to other poets.

Listen to Youn’ read “A GUIDE TO USAGE: MINE” below.

Monica Youn is the author of Blackacre (Graywolf Press 2016), which was named one of the best poetry books of the year by the New York Times, the Washington Post, the Paris Review, and BuzzFeed. Her previous book Ignatz (Four Way Books 2010) was a finalist for the National Book Award. A former election lawyer, she currently teaches poetry at Princeton University and in the Sarah Lawrence and Warren Wilson MFA programs.