For about 10 minutes, in a Brooklyn park on a spring night, an image of Edward Snowden’s face hung in the air.

The activists behind the spectacle, a group called The Illuminator, had come to the park on April 6, 2015, to see a statue of Snowden that another group had illegally erected in the park in honor of the controversial National Security Agency whistleblower. But by the time they arrived, city parks employees had removed it.

So they got to work and created a projection to replace the statue with an eerie sight: Snowden’s face, made of light and beamed, ghostlike, onto a cloud of ash. 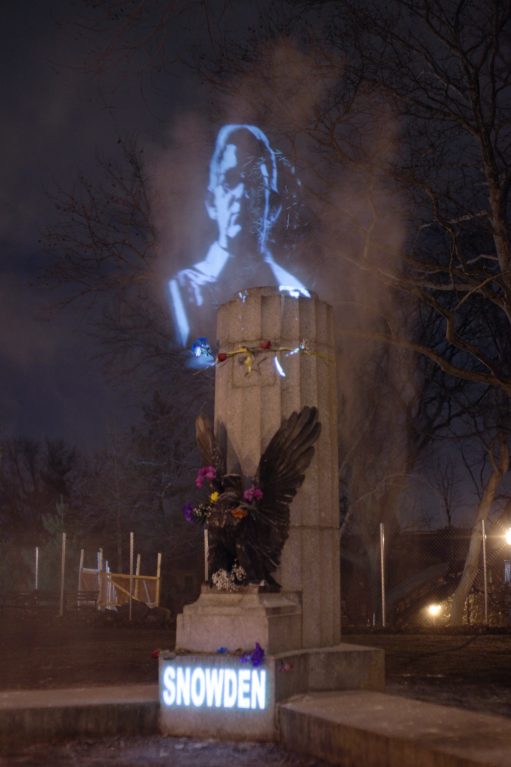 Members of activist group The Illuminator projected an image of Edward Snowden onto ash in a Brooklyn park. Photo courtesy of Emily Andersen/The Illuminator

“We thought it would be an interesting way to intervene … and keep the conversation about it going,” said Emily Andersen, a member of The Illuminator.

Projections have long been used for social commentary, especially in theater — but in recent years, backed by cheaper technology and buoyed by protests against President Donald Trump’s administration, more artists than ever have taken them to the streets. The result is an attention-grabbing method of protest, one that has raised questions about legality even as it brings what activists call new opportunities for conversation.

Projection artists take to the streets

The Illuminator — a group of activist artists and filmmakers — formed alongside the Occupy Wall Street movement in 2011, when artist Mark Read created a projection reading, “99%,” and displayed it on the side of the Verizon building in New York City.

For that display, a single mother living in a nearby housing project allowed Read to mount a projector in her home. But for subsequent demonstrations, The Illuminator outfitted a van with a projector and a 130-pound boat battery to power it.

Andersen said the projections mark a new way to bring protest messages to the public in an accessible way. “I think it’s important to keep trying new tactics, to keep it interesting,” Andersen said.

The use of light “as an alternative to graffiti” only became possible recently, said Glenn Shrum, assistant professor of lighting design at the New School. “As recently as three and four years ago, in order to have a projector that had enough light output … you were talking about a $10,000 piece of lighting equipment,” Shrum said. “That’s not the case anymore.”

Wendall Harrington, who leads Yale’s graduate program in projection design, the only program of its kind in the country, said students began talking with her about using projections for this purpose a few years ago, and that she found the idea exciting. A group at Yale researched how to outfit a van with projection equipment and a power source, but the idea never materialized, she said.

The type of projector and power required to mount a projection outdoors can vary, based on the size of the building and the image being projected. But in general, “we’re talking about something like a 7000-lumen projector,” Harrington said. “The power draw for that is not extreme. You can literally plug it into the charger port on a car … the simplicity of it is kind of beautiful.” 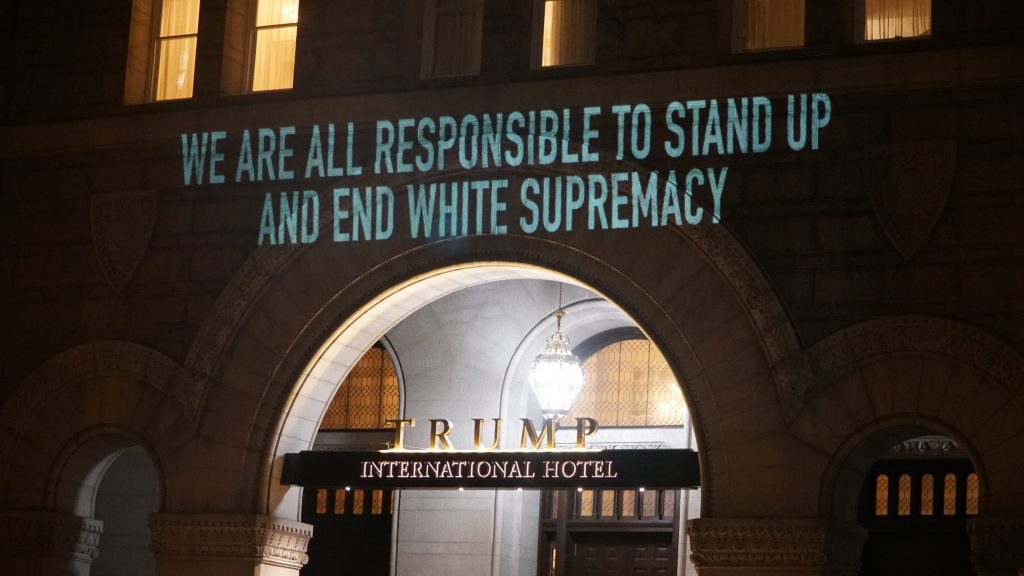 The words “We Are All Responsible to Stand Up and End White Supremacy” are projected on the side of Trump International Hotel in Washington, D.C. Photo by Liz Gorman

And projection mapping software, which transforms designs to fit them to a physical space, has improved, said Robin Bell, an artist based in Washington, D.C., who has projected protest messages for more than a decade. Recently, he projected the message “WE ARE ALL RESPONSIBLE TO STAND UP AND END WHITE SUPREMACY” on the side of the Trump International Hotel, following a white nationalist rally in Charlottesville, Virginia, and a response by the president that critics called insufficient.

READ NEXT: This projection artist is using the Trump International Hotel to protest the president

“It creates these moments in real time, on the street, where people will see it and you’ll get a real honest feedback,” Bell said. A protest message, shown in a large-scale projection, “transforms space, and it creates a kind of temporary venue to have these conversations,” he said.

Photographer Ashton Worthington and artist George Del Barrio created this projection, which reads “RESIST” followed by a series of other words and poems and is displayed on 9th Street in Brooklyn, New York. Gif by Corinne Segal and Lisa Overton

The ‘perfect storm’ of projection art

Projection art is centuries old. Some of the earliest projectors, “magic lanterns,” consisted of a device that used a series of reflectors to project an image from a glass slide to a surface. From the 17th century until the development of electricity, magic lanterns were lit by oil or gas lamps.

Various artists, photographers and scientists experimented with projected media throughout the 18th and 19th centuries. But in the early 20th century and following World War I, the rise of expressionism and related movements led some to experiment with projections more than ever before, Harrington said.

This period was “a perfect storm of necessity and invention,” she said. “You had to be inventive because you didn’t have everything that you wanted, and there was a different way of looking at the world.”

In the leftist theater circles of Germany in the 1920s and 1930s, artists like Bertolt Brecht and Erwin Piscator developed this work as they pioneered the epic theater movement. In the mid-1920s, Piscator created a set for the play “Fahnen (Flags),” which followed the story of anarchists in Chicago who were executed after a bombing took place at a labor demonstration in 1886. Actor and director Judith Malina described the design in her book “The Piscator Notebook”:

Piscator used a complicated divided set on a revolving stage with a treadmill street running through it, and images of the characters and documentary material projected on either side of the stage. A narrator spoke the prologue, and a balladeer commented in song. In this way Piscator intended “to connect the stage and the auditorium.”

His peer, Brecht, also used projections in his work, often to show a title or other explanatory information about a scene. In one 1935 production of “Mother Courage and Her Children,” the late artist and Wake Forest University professor Darwin Reid Payne wrote, Brecht’s projections showed “illustrations and information” about the characters, such as “a list of food prices in Mother’s untutored hand.”

In the mid-20th century, artists continued to develop projection art for a series of World’s Fairs. For the 1958 World’s Fair in Brussels, Swiss scenographer Josef Svoboda created “Polyekran,” a projection piece that used a series of screens showing images that interplayed with each other over the course of a 10-minute performance.

At that World’s Fair in 1964, the IBM Pavilion, designed by Charles Eames and Eero Saarinen Associates, also heavily featured projections. Inside the pavilion, a movie entitled “THINK” played on 22 screens alongside a live host.

As Svoboda continued to experiment with projections in the Lanterna Magicka theater in Prague, Czechoslovakia, throughout the 1960s and 70s, scenic artists in the U.S. began to incorporate the technology into their designs. Meanwhile, other artists were looking at ways to use projections in a public setting. 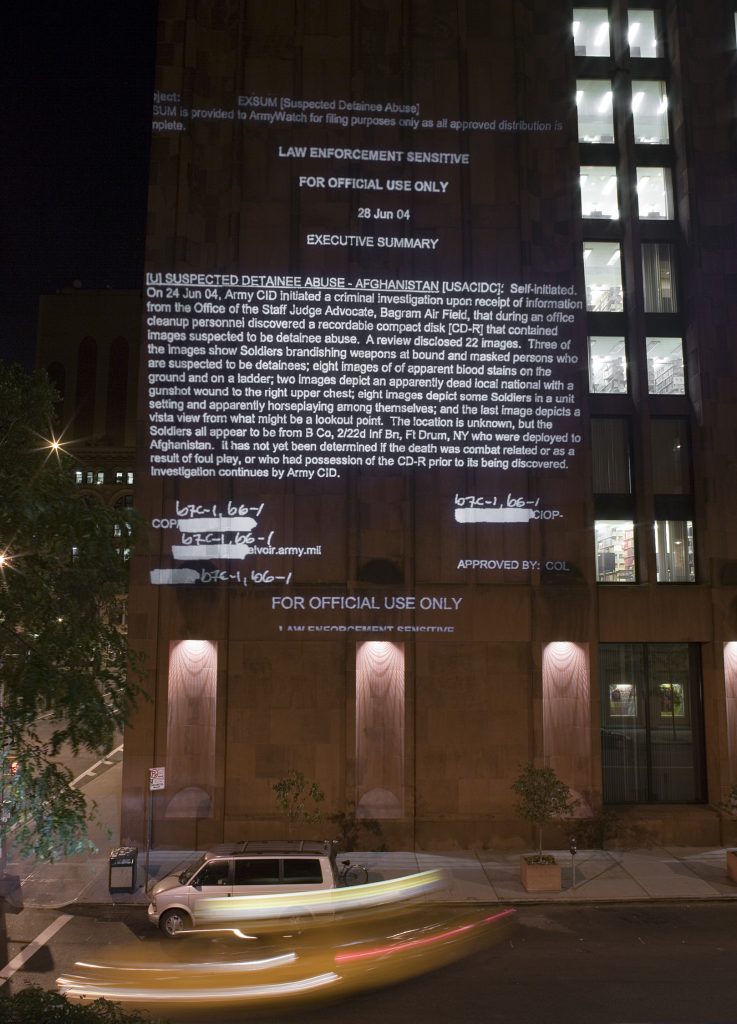 A light projection by Jenny Holzer appears on the Elmer Holmes Bobst Library at New York University in New York City in “For the City,” (2005). The text consisted of U.S. government documents. Presented by Creative Time / © 2005 Jenny Holzer. Photo by Attilio Maranzano

Conceptual artist Jenny Holzer created her “Truisms” series in the 1970s, printing a series of opinions and aphorisms on paper and posting them around New York City in an echo of advertising techniques. In 1982, “Truisms” took a new, electronic form as it appeared on the Spectacolor sign in Times Square. It was the precursor to her later, explicitly political work, projecting declassified government documents from the Iraq War onto various locations in New York City in 2005. 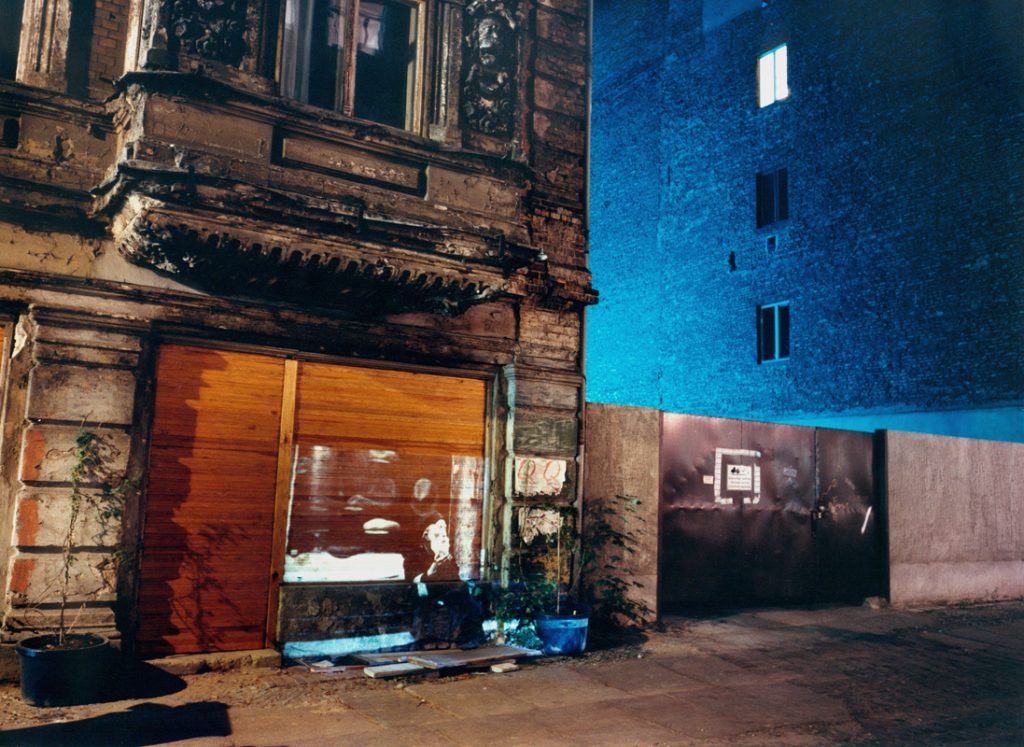 In 1992, artist Shimon Attie displayed projections on Berlin’s former Jewish quarter that showed photographs of “long-destroyed Jewish community life,” he wrote in “Art Journal” in 2003. The neighborhood later became a “chic quarter” that was ripe for gentrification, where the history of the neighborhood’s Jewish residents had fallen out of focus as expensive development took over.

The Writing on the Wall project was realized in Berlin’s former Jewish quarter, the Scheunenvierrrtel, located in the eastern part of the city, close to the Alexanderplatz. At the heart of Berlin, the Scheunenviertel was a center for eastern European Jewish immigrants from the turn of the century. The few historical photographs that remained after the Holocaust reflect the world of the Jewish working class rather than that of the more affluent and assimilated German Jews who lived mostly in the western part of the city. 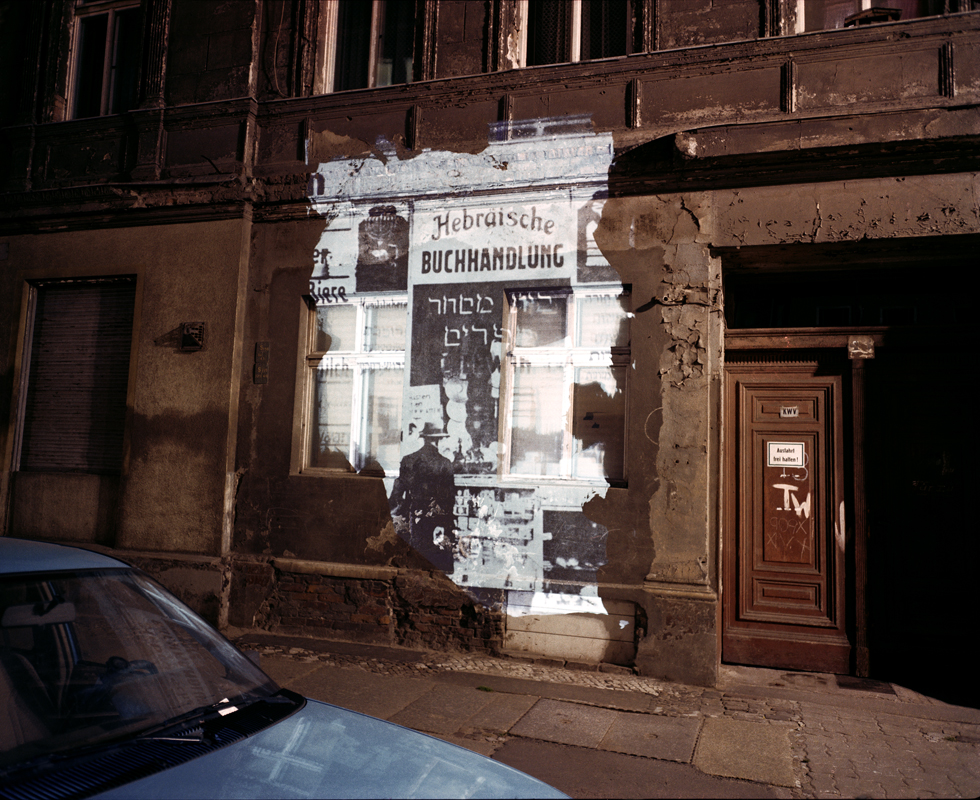 In recent years, some protests have raised questions about the legality of creating a light-based message or image on someone else’s property.

On Sept. 9, 2016, police arrested three members of The Illuminator after they projected “KOCH = CLIMATE CHAOS” onto the exterior of the Metropolitan Museum of Art. The Met had recently named its redesigned plaza the David H. Koch Plaza.

They were charged with “unlawful posting of advertisements,” using a New York law that states that anyone who “posts, paints or otherwise affixes to the property of another person any advertisement, poster, notice or other matter designed to benefit a person other than the owner of the property,” who doesn’t have the right to or “any reasonable ground to believe that he has such right,” is in violation of the law. 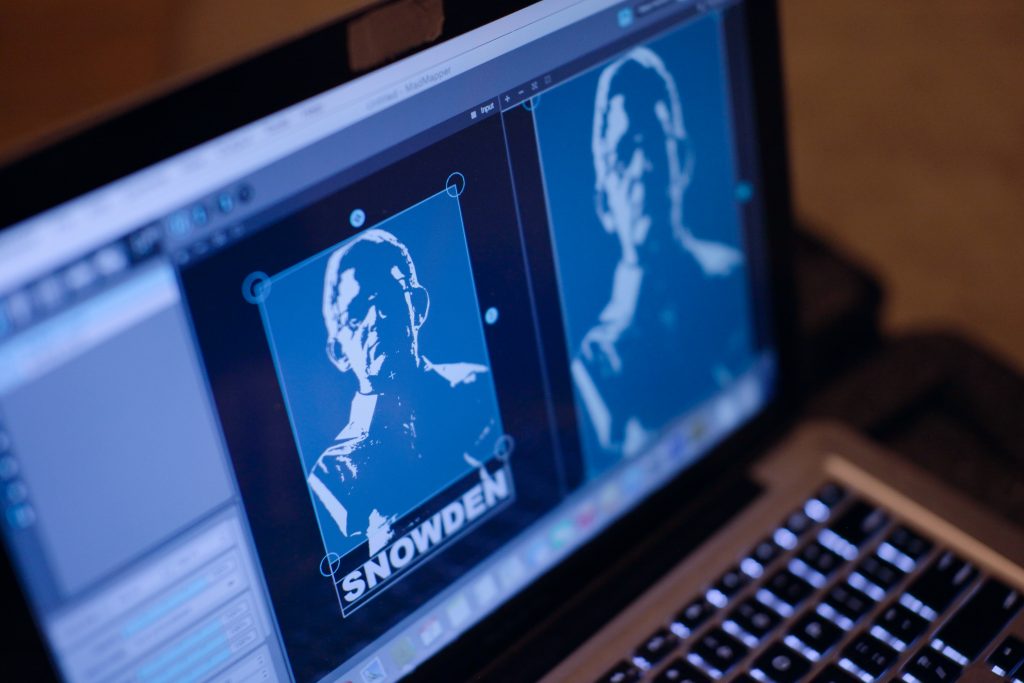 Members of The Illuminator create a projection of Edward Snowden for a Brooklyn Park. Photo courtesy of Emily Andersen/The Illuminator

The charges against The Illuminator’s members were dismissed for legal insufficiency, and they sued the NYPD on various constitutional grounds for their arrest. In an order addressing a motion to dismiss in that case, the court noted that the statue on unlawful advertising was “intended to cover only the physical placement of tangible objects or substances,” and did not cover the use of light. The city ultimately settled for $4,500.

Julia Friedman, writing for art news website Hyperallergic in 2014, criticized the city for what she called the “selective enforcement” of this law to target protesters. “The city does very little to enforce the removal of illegal corporate and commercial signs and posters, choosing instead to fund plainclothes policemen to arrest graffiti artists and, in the case of The Illuminator arrests, protestors,” she wrote. The New York Police Department did not respond to a request for comment.

The charge has not been used against other projection artists since then, said Sam Cohen, an attorney who represented members of The Illuminator in the case.

Left: The words "Heather Heyer, 1985-2017" are projected on the side of the Newseum in Washington, D.C. Photo by Liz Gorman