When he saw his classmates struggling to read in elementary school, Pierre Francillon started drawing letters.

It was the 1970s in the Prospect Lefferts Gardens neighborhood of Brooklyn, New York, and Francillon was a budding artist enrolled in the neighborhood’s Public School 92. “When I would tutor my classmates, it was always through art,” he said, adding that he would illustrate certain words to help his classmates retain their meaning. “I was like, why don’t they just paint a flashcard on the wall?”

Four decades later, that concept has become “PLG ABC,” a public art project spearheaded by Francillon and graffiti artist Damien Mitchell to paint the letters of the alphabet around Prospect Lefferts Gardens, a small neighborhood adjacent to Brooklyn’s Prospect Park that has long been home to a largely middle-class, racially diverse community. And as the area confronts an influx of new residents, Francillon sees the project as one way to connect members of the community, both old and new, to their surroundings.

The idea for the project came up this year in a conversation between Mitchell and Francillon, who in 2014 worked as a curator for bottled water company Wat-aah’s campaign that encouraged kids to drink more water. The plan for PLG ABC: work with different artists from the neighborhood and surrounding Brooklyn to paint 26 murals, each one a letter of the alphabet, that could engage neighborhood kids and encourage them to read. 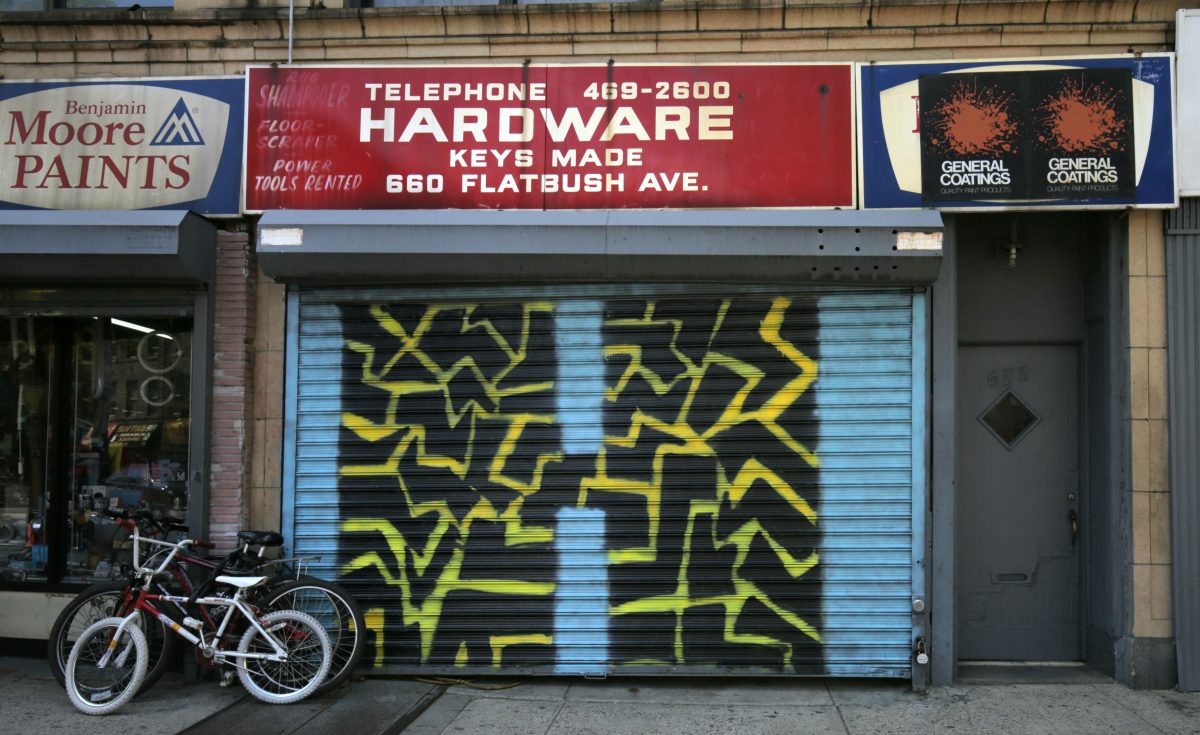 The letter “H” is painted on a storefront on Flatbush Avenue in Prospect Lefferts Gardens, Brooklyn, on May 4, 2017. Photo by Corinne Segal

Francillon said he asks permission from store-owners and building owners to paint on public-facing walls and business gates, and that the majority have been very supportive of the project. When he posted a photo of the first mural, the letter “A,” in a Facebook group for neighborhood residents, it received a warm response, with hundreds of reactions, praise and offers from local residents to help. One woman commented, “My son will love this!!! We should do a scavenger hunt for the kids when more letters are up.”

Francillon grew up in the neighborhood and described his own education in the local public schools as “capital-S superb,” also pointing out that the first secondary school in New York — Erasmus Hall Academy — was established nearby. As a child, he visited New York City museums on school trips and befriended artist Jean-Michel Basquiat, a Haitian and Puerto Rican painter whose work both challenged and left an indelible impression on the white-dominated contemporary art world. 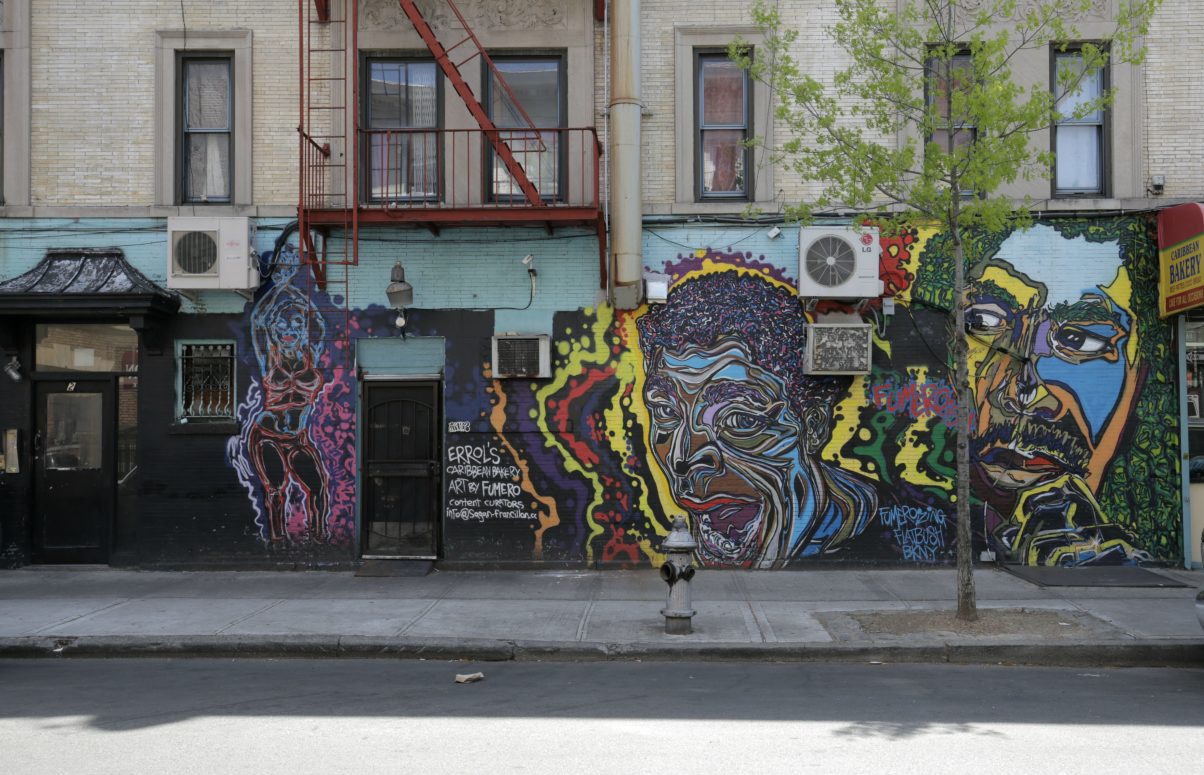 In recent years, the neighborhood where Francillon “saw Afropunks riding their chopper bicycles” as a child has been declared “the last affordable Brooklyn neighborhood with park views” and named one of New York City’s “hottest” neighborhoods as new development plans move forward in the area and rent prices increase. One development, a 24-story tower that looms over the rest of the neighborhood, drew a lawsuit in 2013 from residents who said it would block views and cast shade on their gardens — but that lawsuit was ultimately unsuccessful, and the building opened last year.

Local media outlets and developers alike have repeatedly called the area “one of Brooklyn’s best-kept secrets.” But the area’s amenities — a district of historic homes, cultural diversity and proximity to Prospect Park and Manhattan, among others — are no secret to longtime residents who fear that recent developments and a new flood of young transplants could profoundly change the character of the neighborhood.

Francillon said he hopes that the murals, and public art in general, can inspire discussion among residents while also sparking interest from kids. Mitchell said parents or teachers could use the project as a scavenger hunt by “encourag[ing] kids to go out and find that spelling list,” adding that he hopes to work with local schools on educational initiatives related to the murals. 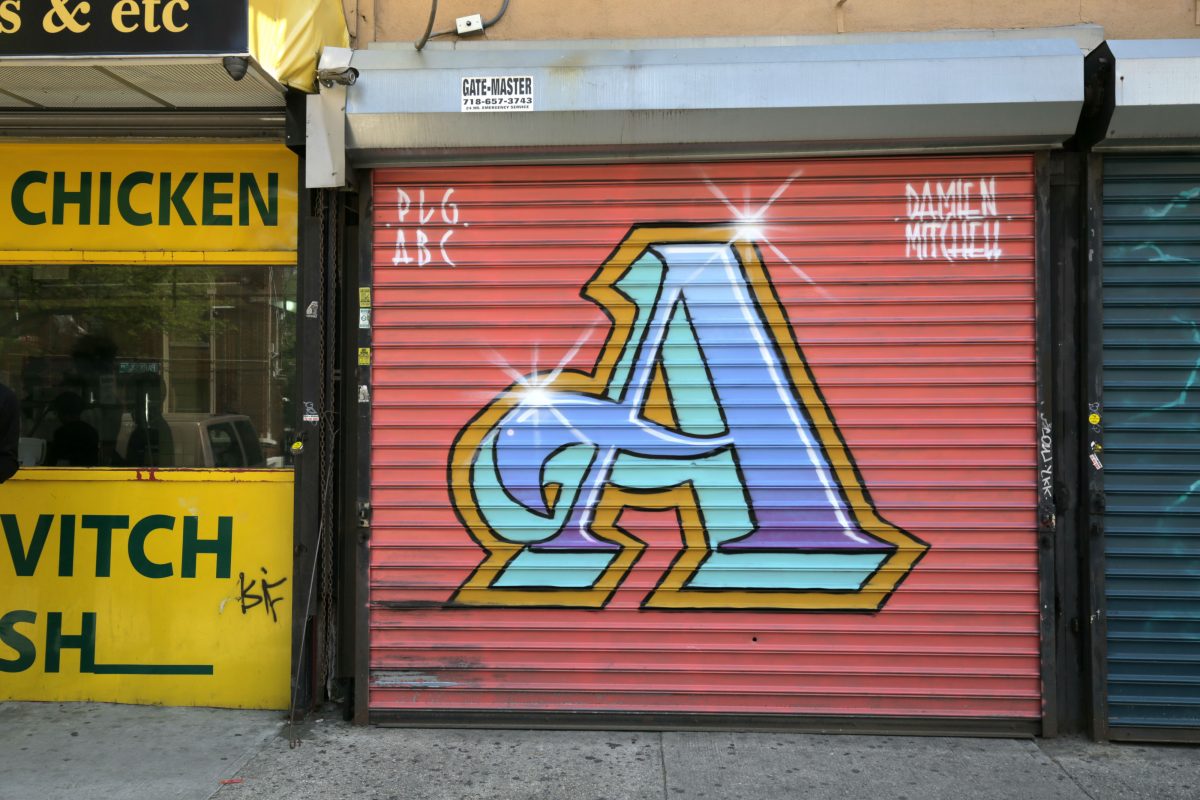 This mural is the first in the PLG ABC series. Photo by Corinne Segal

Five letters are up so far, and Francillon aims for the project to be complete in the next several months. Mitchell said he used his own materials for the “A,” and Francillon is paying for other materials himself, but said he plans to start an online funding campaign in the coming weeks.

The murals, she said, send a message of support for children in the neighborhood and their education, even as the neighborhood evolves. “I think it’s great to involve kids and to show them that the community is interested in them,” she said. “That’s what I think the A to Z [project] shows — that the community wants kids to learn, and they’ll do everything they can to see that that happens.”

This post has been updated to reflect that Erasmus Hall Academy was the first secondary school in New York.

Left: Pierre Francillon stands in front of the first mural in the PLG ABC project, which aims to paint the letters of the alphabet around Prospect Lefferts Gardens, Brooklyn, on May 4, 2017. Graffiti artist Damien Mitchell created the "A" mural in early April. Photo by Corinne Segal