There’s never been anything on television quite like Steven Universe.

The show, which made its debut in 2013, comes from Rebecca Sugar, a veteran of Cartoon Network’s Adventure Time and the first woman to create a show for the channel. It follows the story of the Crystal Gems, the alien heroes who have remained on Earth to guard it after an attempted takeover by other members of their species. They take care of Steven, a half-Gem, half-human young boy who alone bridges the gap between the two species. The show brings as many absurdly fun adventures as genuine lessons about healthy relationships — and now, one of its episodes has taken form as a children’s book in “The Answer,” which comes out Tuesday.

“[LGBTQ] stories are not considered appropriate, are not considered G-rated content, and because they’re not, they’re kept out of media for kids. And I think that that is profoundly sad.” — Rebecca Sugar, creator of Steven Universe

Steven Universe has drawn a devoted fan base for its portrayal of unconventional family life along with a treatment of gender that has earned it such designations as “one of the most unabashedly queer shows on TV,” as Eric Thurm wrote for The Guardian.

The relationships between the Gems, who are coded as female, mark some of the most mainstream same-sex couplings in children’s media. Steven Universe shows those bonds through “fusion,” which in the show means the merging of two characters into another Gem entirely.

“The Answer,” written by Sugar with illustrators Tiffany Ford and Elle Michalka, traces the story of how Ruby and Sapphire, two Gems from different backgrounds, fell in love and came to fuse. But the book is also part of a larger, changing story about how cartoons portray LGBTQ characters for kids. Sugar spoke with us about the book, attitudes toward LGBTQ themes in children’s media and her personal history with fairy tales.

What has it been like to create one of the only mainstream shows for children with LGBTQ themes?

It’s really opened my eyes to the fact that these stories are not considered appropriate, are not considered G-rated content, and because they’re not, they’re kept out of media for kids. And I think that that is profoundly sad and awful. It’s something that I want to change so much, and I’m glad that we’ve found a new way to talk about relationships that’s letting us talk about those relationships.

I think the part of it that is very invisible is how much we talk about love with kids. Everyone knows that love stories are appropriate for kids. Everyone tells stories of attraction to kids, everyone tells these fairy tales to kids. And it’s just like, the air you breathe, it’s so normal that it’s completely invisible. We are constantly reinforcing the idea that there’s a certain kind of love that’s innocent and a kind of love that’s simple and makes sense. And we are not discussing other kinds of love that are just as simple and just as incredible and make just as much sense. 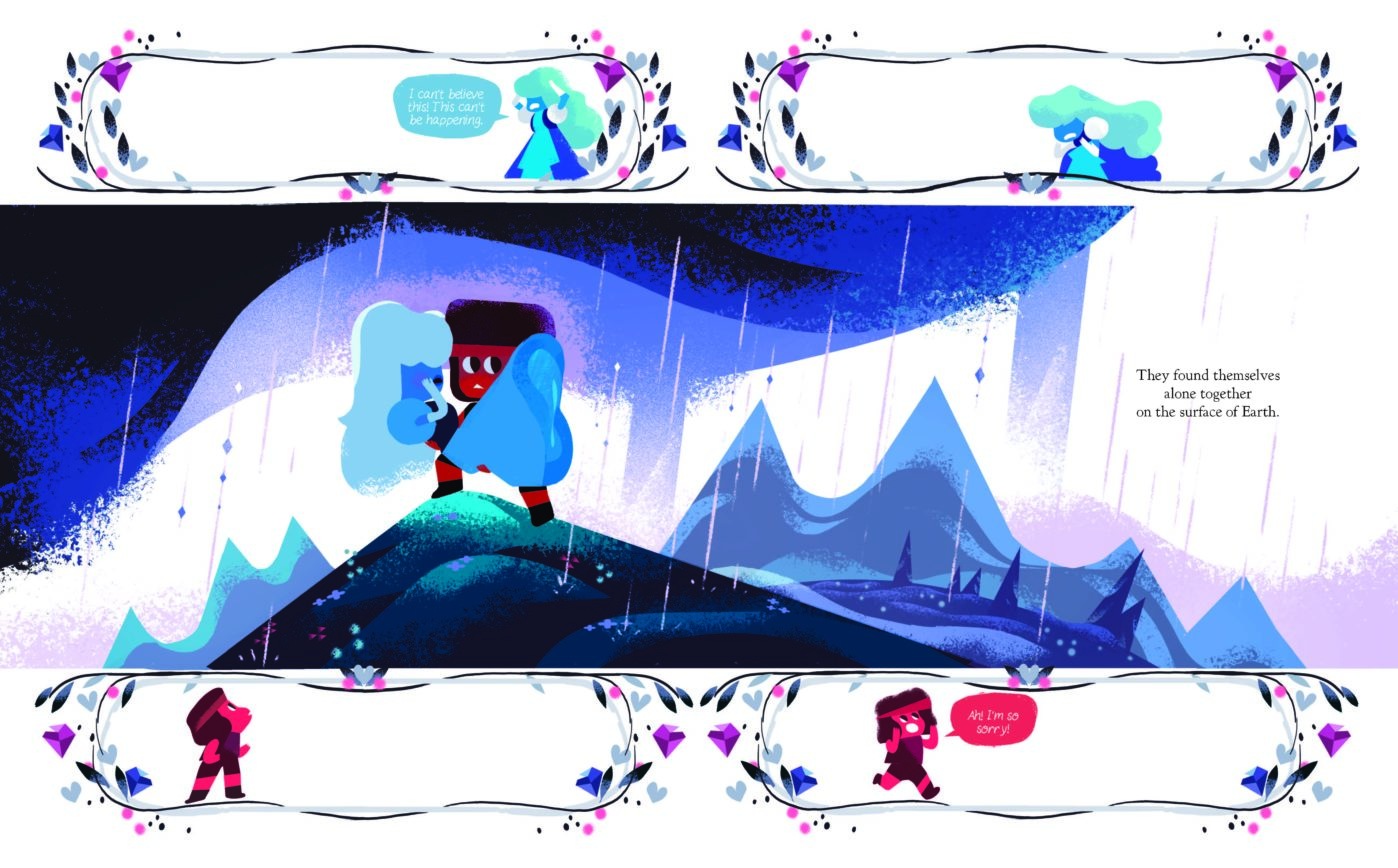 Growing up, did you feel like you could relate to the children’s stories you saw?

I loved these stories. I had a hard time relating to them, but I loved them. I loved fairy tale romance! I wished I could be someone who someone could fall in love with. As I grew a little older it felt more and more impossible somehow. I felt like I was guessing at the right way to feel about things, like I was close but something was off about me, and the more relatable a romantic story was supposed to be to someone my age, the less sense it seemed to make. Having feelings for boys seemed like something everyone wanted to talk about, in everything I saw and read. Everything said, ’Love is something that will happen and change your life and you should prepare for it and it’s going to be wonderful.’

But for a girl having feelings for other girls, there was a deafening silence. There was nothing to say, ‘This feeling you’re having for this girl, this is a love feeling.’ And if you ask someone, ‘Does this mean something?’ suddenly that answer for you is in the hands of someone else. And if that’s met with even a kindness like, ‘Oh, no, don’t worry about that,’ or ‘That doesn’t necessarily mean anything,’ or if someone is just confused by the question, you learn quickly that you are confusing and so are your feelings. Or maybe you don’t even think to ask, and by the time you figure it out, you’ve already learned that these feelings you’re having are not appropriate, instead of being encouraged throughout your childhood to think about your own feelings and enjoy them. 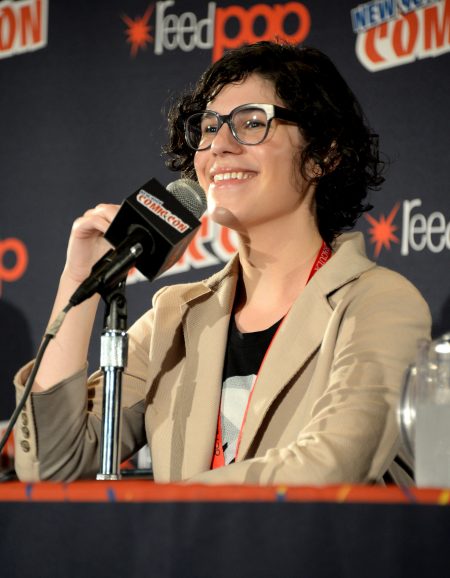 The story of how Ruby and Sapphire meet was portrayed in the episode “The Answer.” Why did you additionally decide to make this particular episode into a children’s book?

The episode was supposed to have a storybook feel in and of itself, so turning it into a book felt really natural, and because the story plays with these visions of the future, the format of the book lends itself to that in a completely different way than the episode. I come from comics, and one of the things I love about the difference between print and animation is that with animation time is literal, but when you’re composing pages and you’re moving through a book, time is very different. It’s all about the way that the drawings grab you and the fact that you’re lingering on pages.

How did the fairy tale tradition influence this book’s process?

At least when it comes to modern re-tellings of fairy tales for children, the focus is so much on the purity and innocence of the love of these characters and the sweetness and cuteness of their story and how it’s so specifically for children — these beautiful, sweet simple stories for children. I wanted this story to have that simplicity and that beauty and that cuteness and to have all the imagery you associate with a fairy tale that’s meant for the eyes of kids, and that’s meant to be a dream of love for you to carry in your mind and in your heart. 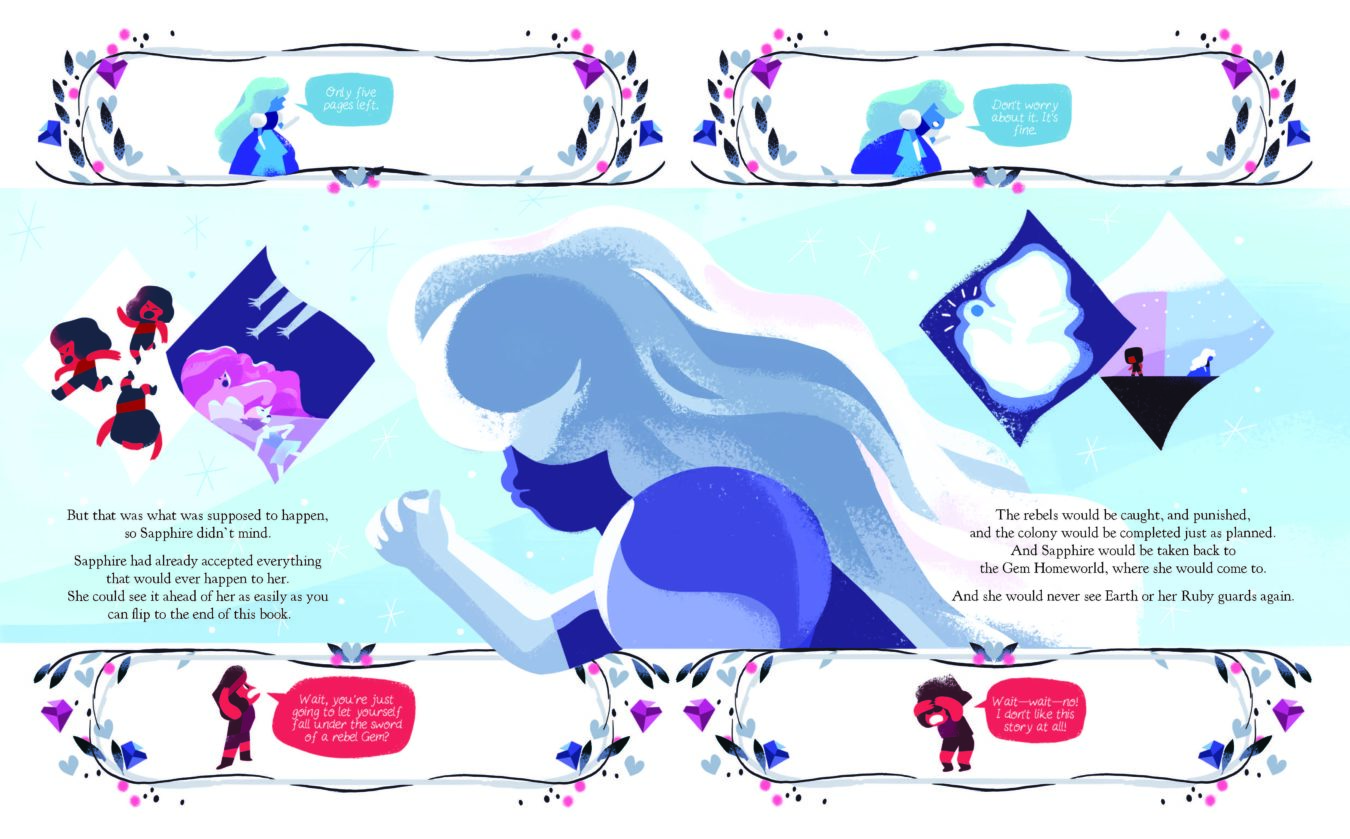 I think part of it for me, too, is that so many of those stories end with a wedding to a person that you just met. Ruby and Sapphire have that spark of attraction, that first-swept-off-your-feet moment together, but so much of their story is past that, when they’re checking in with each other and figuring out what’s going on with each other and being inspired by each other and really exploring and cultivating their relationship. For thousands of years, they are working on this love they have together with each other. I think fairy tales can often short-change you the actual love parts. The actual relationship of the characters in these fairy tales is rarely explored.

Were there any particular compositions in the book that excited you?

The thing I was most excited about was the treatment of Ruby and Sapphire in the borders. They’re sort of reading the book with you as you’re moving through it, and Sapphire is sort of on the top, sort of looking down on everything, a fatalist, and she’s describing what happens in real time, and Ruby, who doesn’t have a vision of the future, is going along with it until she can’t anymore. That imagery, I was really excited about. As they realize that they can change the story they start to crawl out of the borders and take over the pages and move into each others’ borders. And eventually, they eradicate the borders completely.

I wanted that idea of expanding your horizons to happen compositionally with these characters, where they are suddenly realizing that there are all these other ways to look at things, all these other things they can feel if they move outside of the borders that they’re in.

“I think fairy tales can often short-change you the actual love parts. The actual relationship of the characters in these fairy tales is rarely explored.”

When Ruby and Sapphire fuse into Garnet for the first time, her look is very different than the version we see throughout the show. How did you create it?

Until that show, up until that episode, [Garnet] has never asked a question. She is always sure of everything and she is so sure of herself. What was exciting about showing her first form was that we wanted her to be the complete opposite of that. She is the embodiment of questioning. She has no idea what just happened or why she exists. She’s this first thought, she’s this first feeling that’s happening between these two characters. She’s sort of a mix of both of them but there’s something there, which is her. She doesn’t know what she is. So we wanted her to look like that, like all of the gut-drop of being swept off your feet and the sudden giddy excitement of this feeling that’s happening. It’s like she’s just exploded into existence and she’s baffled.

Initially with fusion, what I was really excited about was finding a way to talk about relationships that would be fun and exciting and action-oriented in this show that’s primarily targeted at six to 11 year old boys. I wanted the concept of healthy relationship vs. an unhealthy relationship to be exciting as good guy vs. bad guy. The idea of working on your relationship and caring about it would be as exciting as working out and becoming a buff, amazing fighter. This is something that can benefit you and your life and the people around you, if you sort of care about these relationships that you’re in with everyone around you and with someone that you love. I wanted that to be really cool and exciting.

What can fusion teach people about relationships?

I think part of the goal of having these fusions being characters is that you care about them as people, and part of the way that I want to convey these parts of consent is that this relationship, this living relationship, if you don’t have that, it will damage this person. You need that constant back and forth, that ongoing care about what another person is feeling in order to maintain a relationship and that’s a very abstract concept, but it’s not abstract when you think, ‘Oh, that’s a person, and I could be hurting that person.’ Our bond could be stronger, or weaker, depending on whether or not I care about what’s going on and respect what’s going on with my partner.

Interview has been edited and condensed.