AUGUSTA, Ga. (AP) — That new No. 1 ranking for Scottie Scheffler looks even better in a Masters green jacket.

Two months after Scheffler finally broke through for his first PGA Tour victory, he capped off a most incredible 56-day stretch by making his fourth win the biggest of them all, the Masters by three shots over Rory McIlroy for his first major.

Even as a junior, he was wearing long pants in stifling Texas heat because he wanted to look the part of a tour pro he always wanted to be. Winning the Masters was beyond his hopes.

“I never made it this far. It was just a dream of being here and competing,” Scheffler said in Butler Cabin, moments before Hideki Matsuyama helped him into the green jacket. “I can’t put into words what it means that I’ll be able to come back here for a lifetime.” 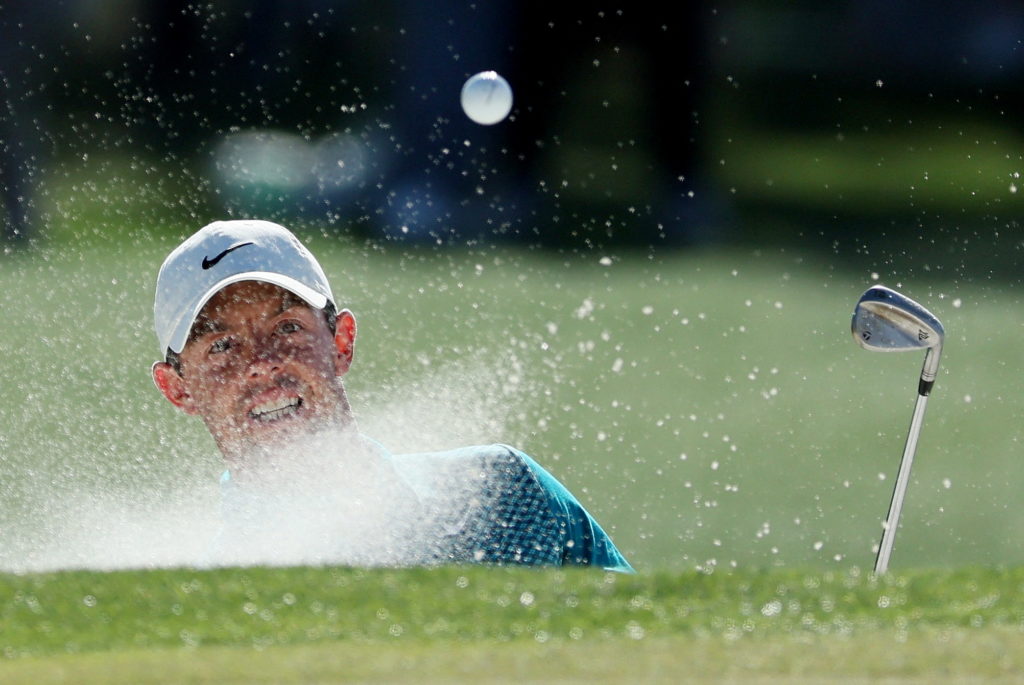 Northern Ireland’s Rory McIlroy plays a shot from a bunker on the 17th during the final roundPhoto by Mike Segar/Reuters.

The only stumble came at the end when Scheffler needed four putts from 40 feet before he could claim his first major, and that only mattered in the record book.

He closed with a 1-under 71 for a three-shot victory over McIlroy, who holed out from the bunker on the final hole for a record-tying final round of 64. McIlroy could only hope that Sunday pressure at Augusta National might get to Scheffler.

“You get on those hot streaks, and you just got to ride them out because they, unfortunately, don’t last forever,” Justin Thomas said. “But he is doing it in the biggest tournaments. … It’s really, really impressive to see someone that young handle a moment this big so easily.”

The Sunday theater, thrilling and tragic, belonged to everyone else. Scheffler overcame a nervy moment early in the round by chipping in for birdie. He delivered key putts to keep Cameron Smith at bay and never looked rattled, even as he was swatting at short putts at the end.

McIlroy was the runner-up. It was Smith who felt as though he let one get away. The Aussie was still in the game, three shots out of the lead, when he dumped his 9-iron in Rae’s Creek on the par-3 12th hole for triple bogey and ended his hopes.

Smith closed with a 73 and tied for third with Shane Lowry, who birdied the 18th for a 69.

Scheffler joined Ian Woosnam in 1991 as the only players to win a major — the Masters in both cases — in their debut at No. 1 in the world.

Everyone should have seen this coming. He won the Phoenix Open in a playoff on Super Bowl Sunday. He followed that with a comeback win at Bay Hill to win the Arnold Palmer Invitational. He rose to No. 1 in the world by winning the Match Play two weeks ago in Texas.

Scheffler’s big moment came early in the round, and it was no less significant.

Starting the final round with a three-shot lead, he watched Smith open with two straight birdies to the cut the deficit to one, and then Scheffler’s approach from the pine needles left of the third fairway came up short and rolled back down the slope.

His pitch was racing toward the hole when it banged into the pin and dropped for an unlikely birdie, and a two-shot swing when Smith from the same position made bogey.

No one got closer than three the rest of the way. Only the contenders changed.

The 12th hole remains the most riveting par 3 in golf, the scene of more collapses than comebacks. Smith became the latest victim.

Coming off birdie at No. 11, his shot was still in the air when he let his club slip through his hands and he slowly closed his eyes twice as it splashed into Rae’s Creek. The next shot wasn’t much better, but at least dry, and Smith’s hopes ended there with a triple bogey.

He was three behind standing on the 12th tee. Three holes later, he was eight back.

From there, any hope resided with McIlroy. All he needed to complete the career Grand Slam was to match the best final round in Masters history and get some help from Scheffler. He only got one of those and had to settle for his first silver medal from Augusta.

Not that he didn’t create some Sunday magic. McIlroy went bunker-to-bunker on the 18th hole, leaving himself right of the green and aiming some 25 feet right of the flag. It rode the slope all the way into the hole, setting off one of the loudest roars of the week.

Morikawa followed him in from the same bunker, different angle, and McIlroy could only laugh.

“This tournament never ceases to amaze,” McIlroy said. “That’s as happy as I’ve ever been on a golf course right there. Just having a chance — and then with Collin, we both played so well all day — and for both of us to finish like this, I was just so happy for him, too.

“I’ve never heard roars like on the 18th green.”

The best ones were saved for Scheffler.

Scheffler still had five holes in front of him, with no evidence he was going to be anything but the smooth, smart operator who seized control on Friday in the toughest conditions to build a five-shot lead and never lost it.

Left: Scottie Scheffler of the U.S. celebrates with his green jacket after winning The Masters Photo by Brian Snyder/Reuters.