LONDON — Sean Connery, the charismatic Scottish actor who rose to international superstardom as the suave and fearless secret agent James Bond and then abandoned the role to carve out an Oscar-winning career in other rugged roles, has died. He was 90.

Connery’s son Jason said his father died peacefully in his sleep overnight in the Bahamas where he lived, having been “unwell for some time.”

“A sad day for all who knew and loved my dad and a sad loss for all people around the world who enjoyed the wonderful gift he had as an actor,” he told the BBC.

Bond producers Michael G. Wilson and Barbara Broccoli said they were “devastated” by the news and that Connery’s “gritty and witty portrayal of the sexy and charismatic secret agent” was largely responsible for the success of the series.

“He was and shall always be remembered as the original James Bond whose indelible entrance into cinema history began when he announced those unforgettable words — ‘The name’s Bond… James Bond,’” they said in a statement Saturday.

Daniel Craig, the current Bond, said Connery “defined an era and a style” and that the “wit and charm he portrayed on screen could be measured in megawatts.”

Scottish First Minister Nicola Sturgeon said the country was mourning “one of her best-loved sons.”

Connery, was a commanding screen presence for some 40 years. He was in his early 30s — and little known — when he starred in the first Bond thriller, 1962’s “Dr. No,” based on the Ian Fleming novel. 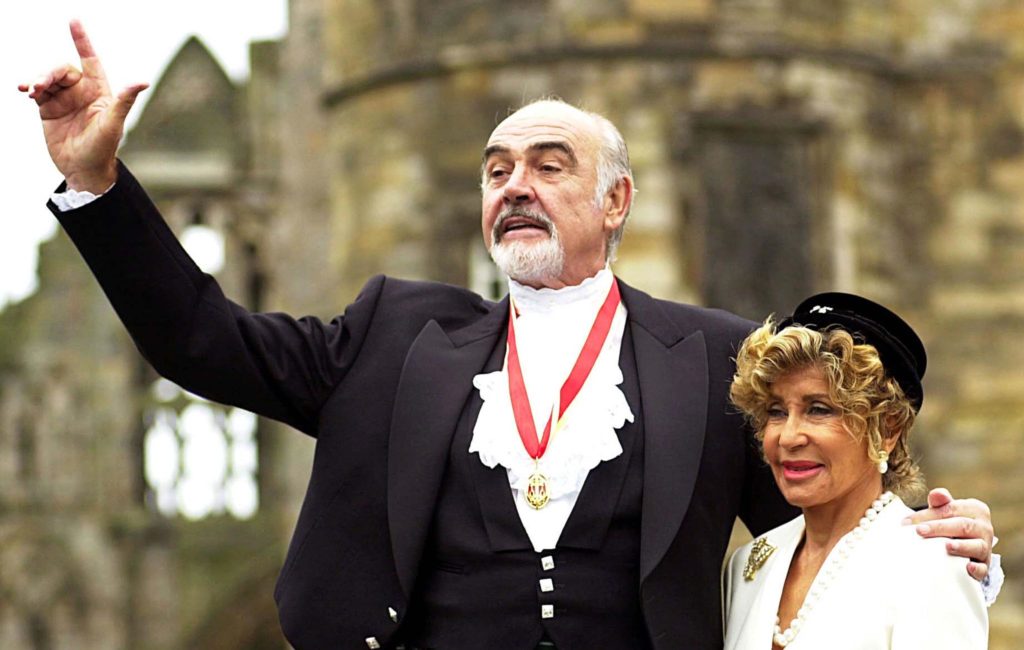 Sir Sean Connery, with wife Micheline (R), pose for photographers after he was formally knighted by the Britain’s [Queen Elizabeth] at Holyrood Palace in Edinburgh July 5. [The Scottish screen legend, famous for his role as James Bond, was honoured two years after he was reportedly denied a knighthood because of his passionate Scottish nationalism. Photo by Reuters.

Condemned as immoral by the Vatican and the Kremlin, but screened at the White House for Bond fan John F. Kennedy, “Dr. No” was a box office hit and launched a franchise that long outlasted its Cold War origins.

United Artists couldn’t wait to make more Bond movies, with ever more elaborate stunts and gadgets, along with more exotic locales and more prominent co-stars, among them Lotte Lenya and Jill St. John.

For decades, with actors from Connery to Craig in the leading role, filmgoers have loved the outrageous stunts, vicious villains and likable, roguish hero who enjoyed a life of carousing, fast cars, gadgety weapons, elegant clothes and vodka martinis (always shaken, not stirred).

Connery continued as Bond in “From Russia With Love,” “Goldfinger,” “Thunderball,” “You Only Live Twice” and “Diamonds Are Forever,” often performing his own stunts.

“Diamonds Are Forever” came out in 1971 and by then Connery had grown weary of playing 007 and feared he wasn’t being taken seriously despite his dramatic performances in Alfred Hitchcock’s “Marnie” and Sidney Lumet’s “The Hill.”

“I’d been an actor since I was 25, but the image the press put out was that I just fell into this tuxedo and started mixing vodka martinis,” he once complained.

When he walked away at age 41, Hollywood insiders predicted Connery would soon be washed up. Who would hire a balding, middle-aged actor with a funny accent?

Connery fooled them all, playing a wide range of characters and proving equally adept at comedy, adventure or drama. And age only heightened the appeal of his dark stare and rugged brogue; he set a celebrity record of sorts when at age 59 he was named People magazine’s “Sexiest Man Alive.” 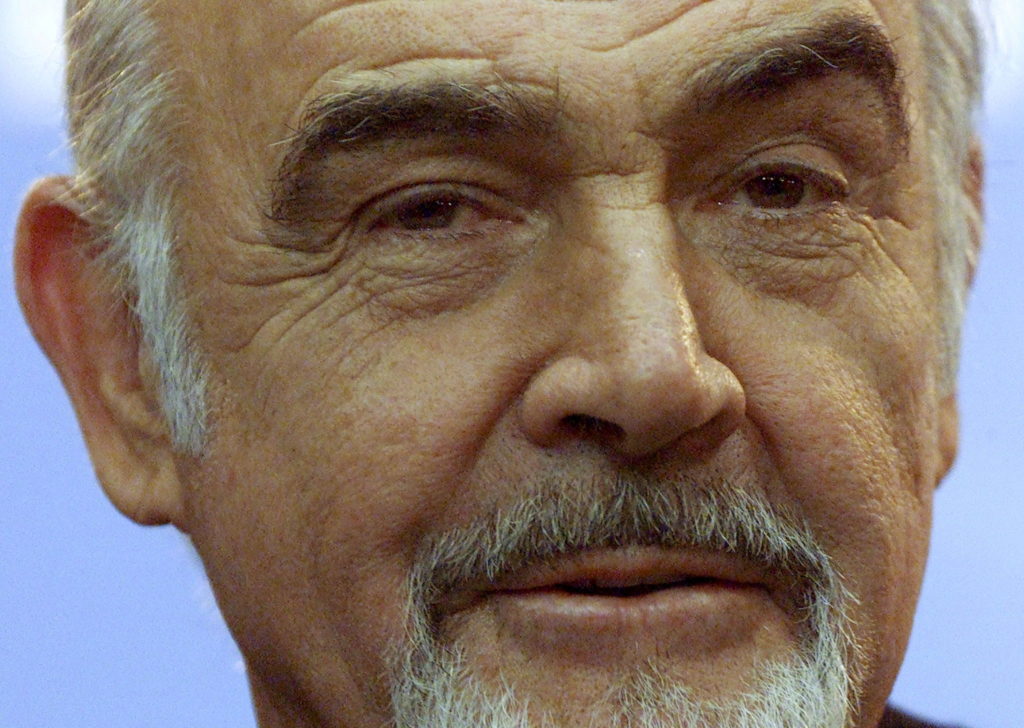 He won the affection of fans of the “Indiana Jones” franchise when he played Indy’s father opposite Harrison Ford in the third picture, 1989′s “Indiana Jones and the Last Crusade.” He turned in a poignant portrayal of an aging Robin Hood opposite Audrey Hepburn in “Robin and Marian” in 1976 and, 15 years later, was King Richard to Kevin Costner’s Robin Hood in “Robin Hood: Prince of Thieves.”

He was the lovable English con man who joined Michael Caine in swindling people in a distant land in “The Man Who Would Be King” and the bold Russian submarine commander in “The Hunt for Red October.”

He delivered a charming performance as a reclusive writer who mentors a teenage prodigy in 2000′s “Finding Forrester.”

He won his Oscar for supporting actor in 1987 for his portrayal of a tough Chicago cop who joins Elliot Ness’ crime-fighters in “The Untouchables.”

By then he was at peace with James Bond, and when he arrived onstage at the Oscar ceremony he declared, “The name’s Connery. Sean Connery.”

He kept his promise not to play Bond again until 1983, when he was lured back by an offbeat script about a middle-aged 007. Based on the only Fleming story that hadn’t been nailed down by the film empire Broccoli and Saltzman created, Connery took the role and helped produce the film. The result was “Never Say Never Again,” a title suggested by his wife, Micheline Roquebrune.

Even as the 007 films made him a millionaire, Connery tried often to separate his own personality from that of Bond. “I’m obviously not Bond,” he once said. “And Bond is obviously not a human being. Fleming invented him after the war, when people were hungry for luxury, gourmet touches, exotic settings. Those were the things the English loved to read about following the privations of the war.” 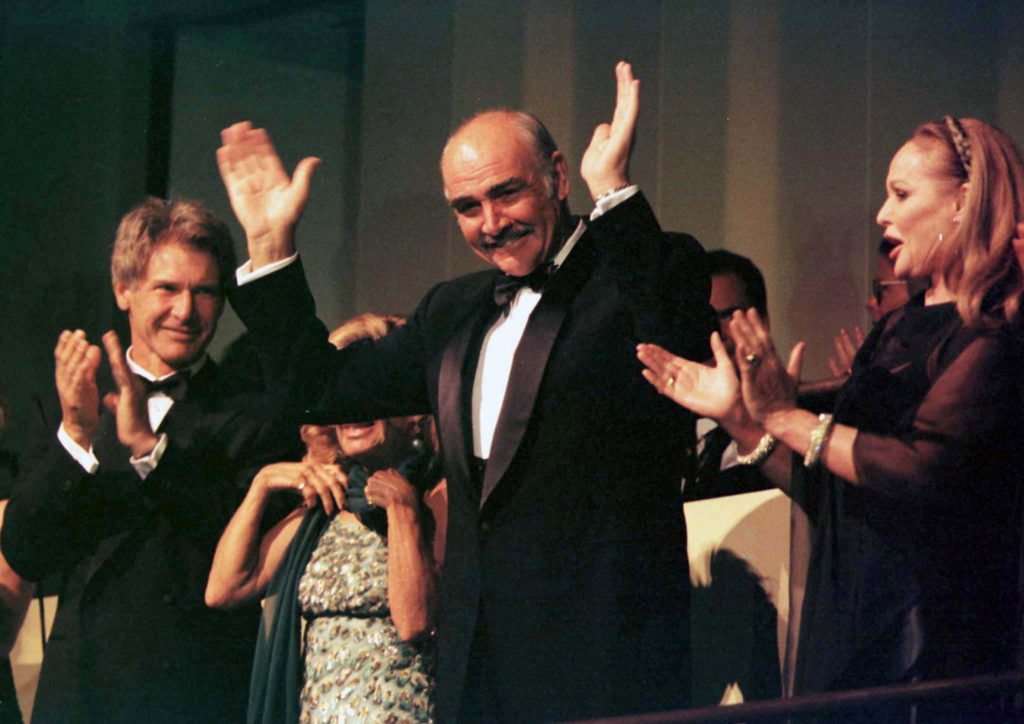 Film star Sean Connery (C), best known for his portrayal of Ian Fleming’s James Bond, waves to the packed house audience below at New York’s famed Avery Fisher Hall at Lincoln Center, May 5. Connery was accompanied by some of his former co-stars (from L) Harrison Ford, Micheline Connery (wife), and Ursula Andress in a balcony box at the outset of the Film Society of Lincoln Center’s gala Tribute to him and his fim career. Photo courtesy of Reuters.

The “real” Sean Connery had a troubled first marriage and a history of comments justifying domestic violence. In 1962, he married Diane Cilento, an actress best known for her role as Molly in “Tom Jones.” They had a son, Jason, who also became an actor, but the union proved tempestuous and ended in 1974.

Its impact lasted long after. Cilento would allege that he had physically abused her and Connery defended his behavior in interviews. In 1965, he told Playboy magazine that he did not find “anything particularly wrong about hitting a woman — although I don’t recommend doing it in the same way that you’d hit a man. An openhanded slap is justified — if all other alternatives fail and there has been plenty of warning.”

When Barbara Walters brought up those remarks in a 1987 interview, he said his opinion hadn’t changed because “sometimes women just won’t leave things alone.”

Connery was widely criticized, but still received numerous honors, including being chosen as commander (the same rank as Bond) of France’s Order of Arts and Literature and a Kennedy Center honoree in 1999. The following year Queen Elizabeth II proclaimed him a British knight.

In 2005 he was chosen for a lifetime achievement award by the American Film Institute. Thomas Sean Connery was born Aug. 25, 1930, in Edinburgh, Scotland, the first of two sons of a long-distance truck driver and a domestic worker.

He left school at age 13 during World War II to help support his family.

“I was a milkman, laborer, steel bender, cement mixer— virtually anything,” he once said.

Weary of day labor, he joined the British navy and was medically discharged after three years. The ailment: stomach ulcers.

Back in Edinburgh, he lifted weights to build his body and compete in the Mr. Universe contest. He came in third, and briefly considered becoming a professional soccer player, but chose acting because he reasoned his career would last longer.

He got his first big break singing and dancing to “There is Nothing Like a Dame” in “South Pacific” on the London stage and in a road production before going on to act in repertory, television and B movies. He went to Hollywood for two early films, Disney’s “Darby O’Gill and the Little People” and “Tarzan’s Greatest Adventure.”

When he decided to become an actor, he was told that Thomas Sean Connery wouldn’t fit on a theater marquee so he dropped his first name.

Then came the audition that changed his life. American producers Albert “Cubby” Broccoli and Harry Saltzman had bought the film rights to a string of post-World War II spy adventure novels by Fleming. Connery was not their first choice for “Dr. No.”

The producers had looked to Cary Grant, but decided they wanted an actor who would commit to a series. The producers also realized they couldn’t afford a big-name star because United Artists had limited their film budget to $1 million a picture, so they started interviewing more obscure British performers.

Among them was the 6-foot-2 Connery. Without a screen test, Broccoli and Saltzman chose the actor, citing his “dark, cruel good looks,” a perfect match for the way Fleming described Bond. When Connery started earning big money, he established his base at a villa in Marbella on the Spanish coast.

He described it as “my sanitarium, where I recover from the madness of the film world.” It also helped him avoid the overwhelming income tax he would have paid had he remained a resident of Britain.

As his acting roles diminished when he reached his 70s, Connery spent much of his time at his tax-free home at Lynford Cay in the Bahamas. He played golf almost every morning, often with his wife. He announced in 2007 that he had retired when he turned down the chance to appear in another “Indiana Jones” movie.

“I thought long and hard about it, and if anything could have pulled me out of retirement it would have been an `Indiana Jones’ film,” he said.

“But in the end, retirement is just too damned much fun.”

Though he lived abroad for many years, Connery was a passionate supporter of Scottish independence and a donor to the Scottish National Party.

Sturgeon, the SNP leader and Scotland’s first minister, said “Sean was a global legend but, first and foremost, he was a patriotic and proud Scot.”

“He was a lifelong advocate of an independent Scotland and those of us who share that belief owe him a great debt of gratitude,” she said.

Craig, whose latest Bond film “No Time To Die” has been delayed into next year because of the coronavirus pandemic said Connery will continue to influence actors and film-makers alike for years to come.

“Wherever he is, I hope there is a golf course,” Craig said.

Connery is survived by his wife, brother Neil and sons Jason and Stefan,

Left: FILE PHOTO: British actor Sean Connery arrives for the premiere of his latest film 'The League of Extraordinary Gentlemen', at the Odeon, Leicester Square, London, September 29, 2003. Photo by Reuters.