Stitch by stitch, a brief history of knitting and activism

In the following weeks and months, Payne was among those who protested the killing and continued her work as a community organizer. That November, at an activist training, she met CheyOnna Sewell, an activist living in St. Louis at the time who “was always knitting,” Payne recalled.

In October 2014, Sewell and Payne helped form the Yarn Mission, a knitting collective aimed at fighting racial injustice through community organizing and by supporting black creators’ work. The quiet setting of a knitting circle has helped them discuss difficult topics, Payne said. “A lot of times what we’re talking about is really traumatic,” she said. “It’s the only way I’m able to talk about a lot of the things that have happened in Ferguson and continue to happen in St. Louis.”

Recent marches such as the Women’s March on Jan. 21 and the March for Science on Saturday have brought knitting into the international spotlight and lured newcomers to a symbol of activism that dates back hundreds of years.

Academics and historians say that these new knitters are tapping into a long history of needle arts in the U.S. that is inextricably bound up in race, gender and class issues. Its recent popularity is only the latest chapter. 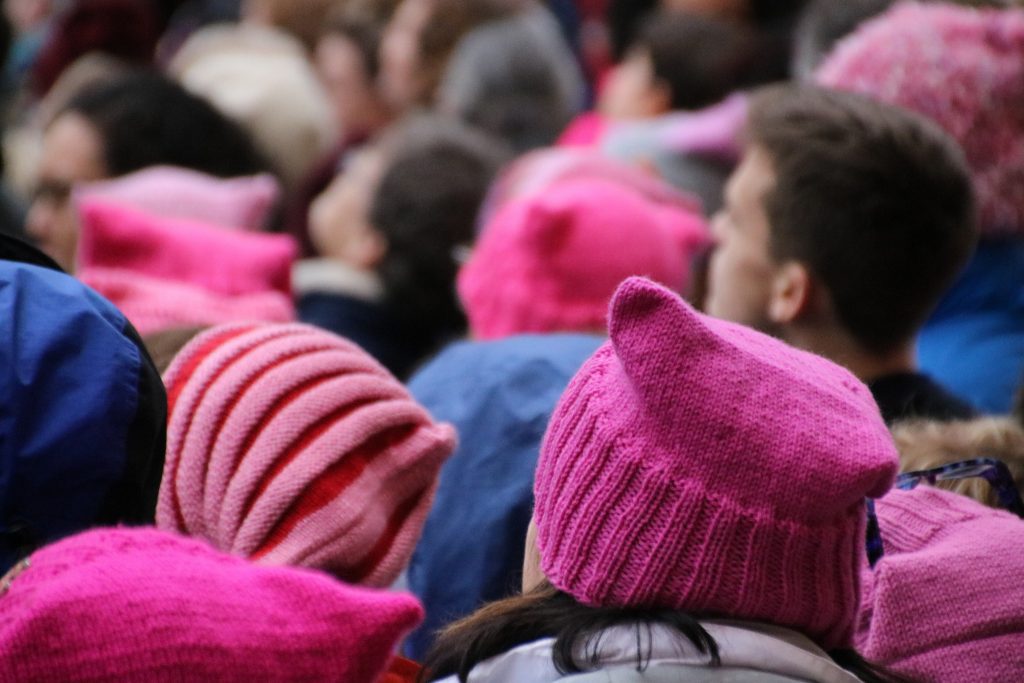 ‘Socks for Soldiers’ and ‘liberty caps’

For much of American history, “Women were limited in lots of areas of public activity. They were not supposed to be visible in public,” Katherine Durack, former associate professor at Miami University, told the NewsHour Weekend. “It makes sense, then, that needle arts would be an important means of expression and that includes political expression.”

Before the American Revolution in the 1760s, most clothing was homemade and needle arts were a vital part of women’s education. Sewing and knitting were not only necessary skills but also political tools for the women involved in resisting authority.

In defiance of British taxes on textiles and other products, women in the colonies eschewed British-made clothing by creating homespun cloth. Families and churches would hold spinning bees, competing to see who could create the most yarn. During this era, “Women’s role as buyer of the family goods became pivotal in colonial resistance. … By boycotting British fabrics and reverting to intensive domestic textile manufacture, women stood ready to contribute equally toward the Revolution,” Laura Sapelly wrote in her in her Pennsylvania State dissertation “Pedagogies of Historical and Contemporary American Sewing Circles.”

Women also used needlework to create uniforms for soldiers during the Revolution, though some found unexpected uses for the craft. As the British occupied Philadelphia in 1777, Molly “Old Mom” Rinker, a tavern owner in Philadelphia, reportedly hid information about their troop movements in balls of yarn. She would pretend to knit on a rock overlooking Wissahickon Valley and drop them to Gen. George Washington’s troops below. 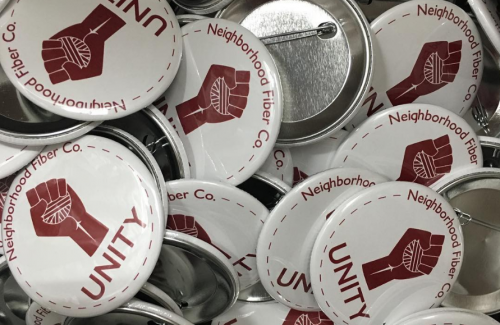 Meanwhile, the revolution in France was stirring, and along with it came a new era for women’s political involvement in the country. As leftist groups in France planned to overthrow the monarchy, they rallied around the red Phrygian caps, “liberty caps,” which were based on hats that emancipated slaves wore in ancient Rome.

Though women were involved in political debate and many supported the Revolution, their male compatriots worried that fighting and donning liberty caps in public would upend gender roles, said Jennifer Jones, Associate Professor of History at Rutgers University. Scholar Bernard A. Cook wrote that at the time, the right for women to bear arms “was seen as an insult to the physical superiority and fashionable difference between men and women, because armed women, for reasons of comfort and gender subversion, often dressed like men and wore male symbols, such as the red cap of liberty.”

Throughout the early days of the country, and throughout much of the 19th century, women’s approach to knitting and other needle arts also underscored existing class and racial divisions. Middle-class and wealthy white women were free to take up needlework selectively, and for either leisurely or political causes, while lower-income or marginalized women turned to it for income and survival.

At the time, among the upper classes, knitting was “reduced to charity work by well-off women with excess time,” Tove Hermanson, a writer on fashion and culture, wrote. But it continued to provide an important source of income for many others, including freed slaves; Hermanson wrote that in 1864, the abolitionist Sojourner Truth taught “sewing, knitting and cooking” to refugee camps of emancipated slaves to help them financially support themselves.

And during the movement for abolition, sewing circles continued to serve as a place for women to exchange ideas and talk about political work. The Liberator, an abolitionist newspaper published by William Lloyd Garrison between 1831 and 1965, wrote on Dec. 3, 1847:

“Sewing Circles are among the best means for agitating and keeping alive the question of anti-slavery. … A friend in a neighboring town recently said to us, Our Sewing Circle is doing finely, and contributes very much to keep up the agitation of the subject. Some one of the members generally reads an anti-slavery book or paper to the others during the meeting, and thus some who don’t get a great deal of anti-slavery at home have an opportunity of hearing it at the circle.”

Women in the Confederacy also urged other women to contribute to political efforts through knitting. In her 1863 poem “Socks for the Soldiers,” Georgia-born Confederate poet Carrie Bell Sinclair wrote: “Oh women of the sunny South / We want you in the field; / Not with a soldier’s uniform, / Nor sword, nor spear, nor shield; / But with a weapon quite as keen— / The knitting needle bright— / And willing hands to knit for those / Who for our country fight.”

Following the Civil War, and as reformist movements like temperance took hold in many parts of the country, women organized sewing bees to create quilts and other goods whose sale could support those causes. During this time, as women sewed overtly political messages and images on banners and quilts, “The quilt became a political agent for temperance women,” Sapelly told the NewsHour Weekend. “It expressed their support of the cause, even if it was on a bed [or] if it was hung on a wall.”

For decades, knitting and sewing had provided a path to political involvement for women — but also one that maintained traditional gender roles.

Those tasks were also used by anti-suffragists to mock women’s potential political participation, such as in a cartoon published in the Punch’s Almanack in 1853. 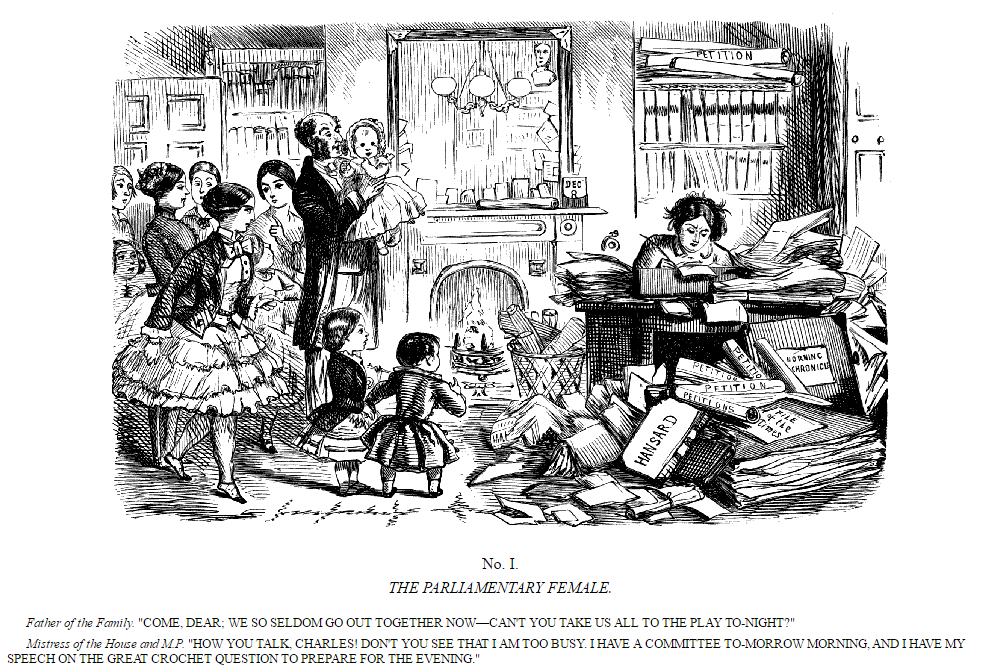 This cartoon by John Leech was published in Punch’s Almanack in 1853. Photo courtesy of Project Gutenberg

As women’s suffrage movements gained steam in the U.S., many of its leaders rejected traditionally “feminine” tasks. “Their stance was, these were radical women and they felt that they need to take a stance on sewing and knitting and any kind of needlework,” Sapelly said.

In the meantime, women’s magazines in the U.S. “separated ‘real’ women – those who continued to sew or knit – from those wanting the vote,” Sapelly wrote in her dissertation. These publications excluded black and poor women, instead establishing the face of needlework as white and middle class. 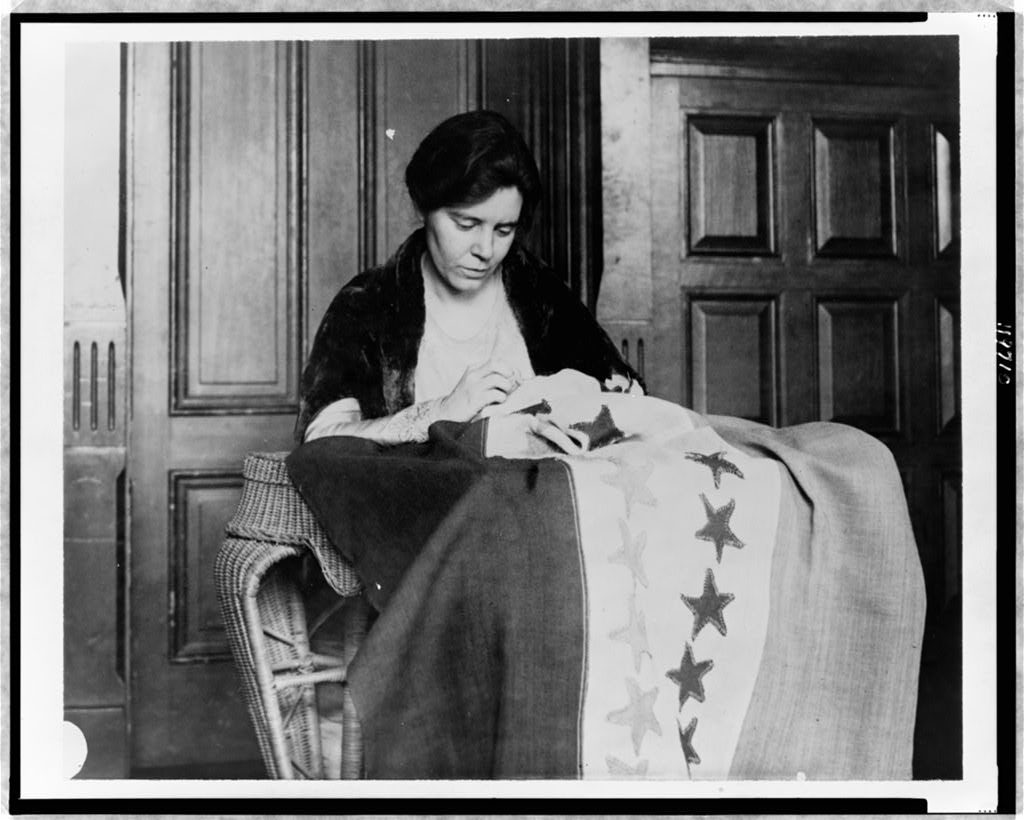 But some suffragists used the imagery of needle arts to further their cause and appear non-threatening to anti-suffragists, who had decried them as “unsexed” and unwomanly. In 1920, after the 19th Amendment passed Congress and suffragists waited for individual states to ratify it, suffrage leader Alice Paul posed on the cover of Suffragist magazine as a modern-day Betsy Ross.

The image projected a non-threatening stance by suffragists, Sapelly said. “It’s like communicating, we’re not going to stop being women if we get the vote,” she said. “We’ll still probably be sitting quietly in the sewing room and doing our needlework.”

The Riot Grrrl feminist punk movement of the 1990s brought new political significance to DIY culture, encouraging feminists and others to take up crafting in order to resist corporations. “Personalized and unique hand-knit objects have been used to eschew mass production in favour of non-corporate, small-scale production, often in support of women-owned local suppliers, yarn shops, and designers,” Beth Ann Pentney wrote for the feminist journal “thirdspace.”

Since then, a number of independent knitting projects have called attention to progressive causes. The 2005 Wombs on Washington project rallied people to create knitted wombs to support pro-choice legislation, and two years later, the Stitch for Senate initiative called on people to knit helmet liners for U.S. senators to call for withdrawal from Iraq. 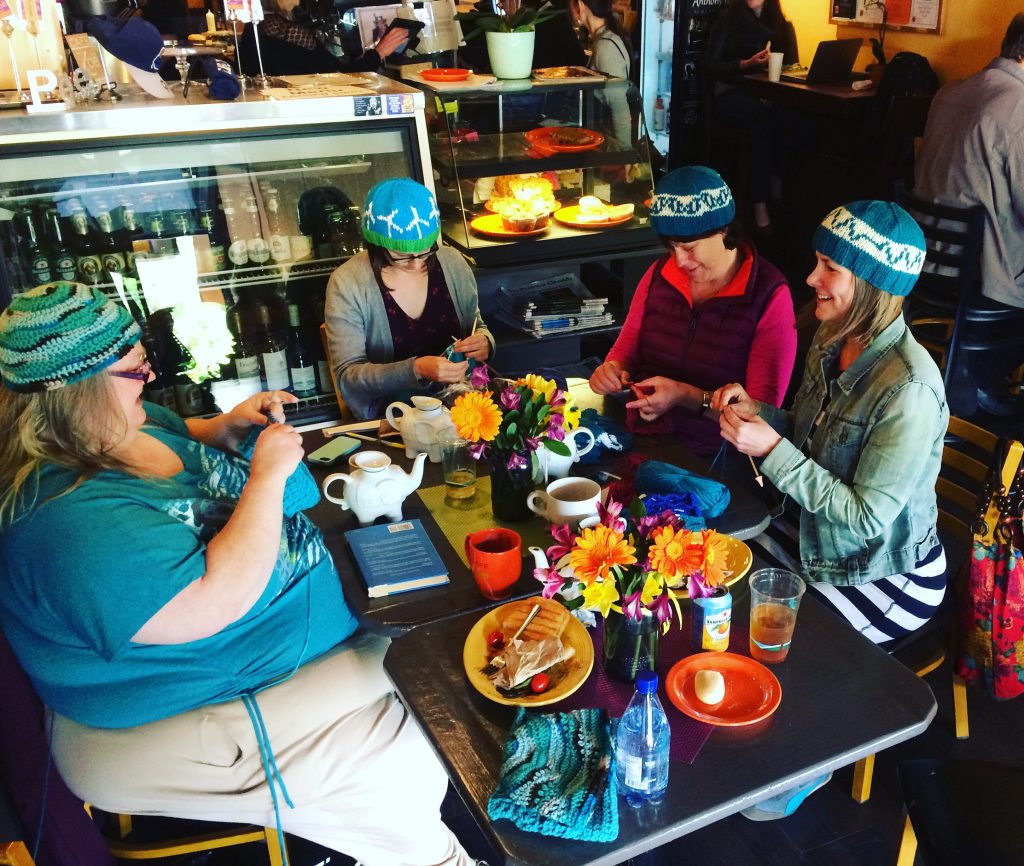 A knitting group works on hats for the March for Science at Cafe Zoe in Menlo Park, California. Photo by Michael Perez

But knitters, particularly those critical of President Donald Trump’s administration, say they see a resurgence in people’s interest in knitting as a political tool in recent months, particularly around the Women’s March with the creation of “pussyhats,” and again before the Science March. Online, a number of groups — including “The Resistance Knitters” and a March for Science crafting group on Facebook — are encouraging people to use their work for political causes.

For the Science March on April 22, Heidi Arjes, a postdoctoral fellow at Stanford University, designed the “resistor” knit hat, which shows a battery and three electronical devices called resistors. Along with two other postdoctoral fellows, she also helped organize Project Thinking Cap, which encouraged March for Science attendees to knit hats in green or blue shades. Her design received thousands of shares online.

“I never associated knitting with having as much power as my science and now I’m realizing that it really does,” she said. “Knitting is a way I can reach people.”

Karida Collins, owner of Baltimore hand-dyed yarn store Neighborhood Fiber Co., was reluctant to address politics in her business for a long time. “There are certain things you don’t bring to the yarn store,” she said. “You don’t want your customers arguing with each other.”

But after the election, she sent an email to her store’s listserv, saying that her business was “opposed to policies of homophobia and xenophobia and white nationalism.” She acknowledged that voicing the opinion could be risky for the business. But “I felt like I needed to draw a line in the sand,” she said.

This post has been updated to reflect that colonial-era spinning bees were held to create yarn.