These students just received a scholarship from Beyoncé

Maya Rogers had been playing music for nearly 30 years in 2013 when she sustained a traumatic brain injury from a car crash.

When she began treatment, which involved playing instruments and singing to accelerate her recovery, Rogers was no longer able to read sheet music. It took years of work, but she was able to eventually sing and play again, and also teach.

Today, she is one of four recipients of the Formation Scholarship, a tuition award created by singer and songwriter Beyoncé and funded by her company Parkwood Entertainment that supports young black female scholars.

Endowed in honor of Beyoncé’s visual album “Lemonade,” which was released one year ago, the tuition scholarship provides $25,000 for four students. Applicants composed an essay describing why “Lemonade” was significant to their lives and submitted a portfolio of their work.

Recipients say the Formation Scholarship, named after the last track of the album, is doing more than just funding tuition: it is helping young black women to enter creative fields, where under-representation, job insecurity and discrimination can act as barriers to entry or deterrents to continuing a career.

“If a young black girl saw me performing, talking about something that was universal, I think it would definitely have an impact on her … because she saw someone that was like her doing it, too,” Rogers said.

The NewsHour Weekend spoke to the four scholars to learn more about their backgrounds, embracing their identities as black women and the goals of their work. 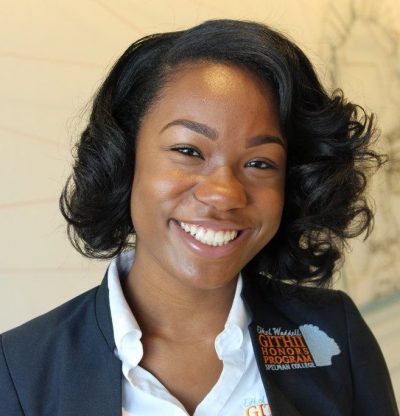 The granddaughter of a professor and daughter of a lawyer, Bria Paige knew that she wanted to study English before enrolling at Spelman, where she has focused her studies on authors from marginalized communities.

As a UNCF Mellon Mays Undergraduate Fellow, Paige will be conducting research on “black women and their political spaces,” a project in part inspired by “Lemonade.”

“I felt like her album transcended just the artistry and really delved into the political,” Paige said of Beyoncé. “Her album really celebrated black womanhood. And not only the joy and triumphs of black womanhood, but also the perils, the hard times.”

Paige intends to earn her PhD in English and become a professor. She hopes to use an interdisciplinary framework in academia, incorporating women’s studies and gender studies. “Being a Formation scholar just means to me being bold, unafraid and unapologetic in my work and in my scholarship,” she said. “Let’s just get in formation to really shake up this world and make our presence known.”

Sadiya Ramos’ dance career started at the age of six when she began taking lyrical dance lessons from her mother at their church. Since then, she has appeared in the Nutcracker with the American Ballet Theatre, performed with Stevie Wonder at the Special Olympics and danced in a music video to protest the death of Philando Castile, who was shot and killed by a police officer last year during a traffic stop in Minnesota.

“I fell in love with the ability to communicate through your body. The body has no limits and neither does creativity,” Ramos said.

As a child, Ramos felt she was rejected from some roles for which she was qualified because she is not white. “My greatest challenge is being a woman of color in ballet,” she said. “There are more as the years go by, but there aren’t many of us and people aren’t exactly open to this change. That was definitely something that I went through as a child because the way my body grew was different, my skin tone was different and I was just different. That was hard for me to understand as a youth.”

With the aid of supportive dance teachers, and with ballerinas of color like Laura Anderson, Michaela DePrince and Misty Copeland as role models, Ramos said she gained the confidence to embrace what makes her different.

“As a woman of color, people have different perceptions of me and how I will act and how I will dance. My parents instilled in me the importance of not paying attention to the outside noise because it truly didn’t matter. It was just about dance,” she said.

Music has been a part of Rogers’ life since she began playing the violin at age 4 and started practicing piano a year later. She took singing lessons from her mother and played the flute throughout college.

Rogers was repeatedly told that her interest in the creative arts could not yield a stable career, but she did not want to leave it behind. Her experience teaching led her to study music therapy and the healing arts. She said the scholarship has helped to ease the burden of school’s expenses, bringing her closer to becoming the first person to earn a certificate in music therapy from Howard University.

“My focus is really these days around how music impacts human beings, how the human voice is something that we can use to be empowered by how it connects us to one another when we sing together. Really wonderful things happen: we bond together socially, our bodies actually begin to sync up, our heart beats sync up, we breathe together,” Rogers said.

She added that she hopes to work with people who have disabilities and can benefit from music therapy. “Witnessing how music really impacts their ability to communicate better, their self confidence, their general enjoyment for life. To me, those are the greatest triumphs,” she said. 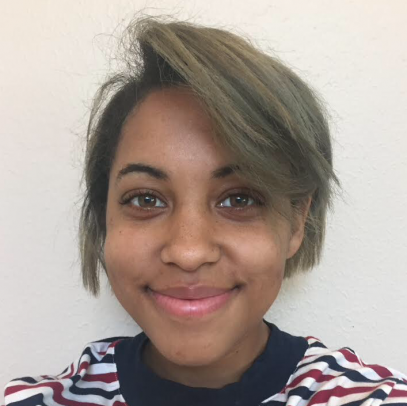 Avery Youngblood said her own identity as a black woman has shaped her scholarship, having written an undergraduate thesis on minority dialect and African American Vernacular English at Stanford University. Now, it continues to do so as she studies at the Parsons School of Design.

Youngblood said she enjoys using design to relay political messages on race, ethnicity and linguistics, among other topics. She is always thinking about perception: how she is perceived because of her race and gender, how other people are perceived because of their identities and how such perception affects opportunities available to them.

“Your greatest strength is your identity, your roots,” she said.

Youngblood believes black womanhood gives her a unique perspective to design and encourages her to create for a diverse audience.

“I think as you become older, you become more conscious of what’s around you: how everything is geared towards a certain audience or geared towards a certain demographic and you realize you’re not that demographic,” she said. “What design has allowed me to do is actually look at every single thing that I walk past — especially in New York, where you have so many advertisements — and you can tell what speaks to you and what doesn’t speak to you. I hope to achieve designs that speak to all different types of bodies.”

This article has been updated to reflect that Sadiya Ramos began dancing at six years old.

Left: Sadiya Ramos, a recipient of the Formation Scholarship, has been dancing since she was 3 years old. Photo courtesy of Sadiya Ramos