Sudanese cartoonist Khalid Albaih was lauded as “an artist of the revolution” during the Arab Spring, and now he’s pointing his pencil at other world events.

Based in Qatar, Albaih used social media to disseminate his cartoons about the fight for democracy in his native Sudan as well as other parts of the Arab world. Activists on the ground have stenciled his work on cement walls from Cairo to Damascus.

His Facebook page “Khartoon!” (a play on Sudan’s capital Khartoum) takes on other targets, including the recent FIFA corruption case and the continuing African migrant crisis.

Albaih’s work is on display in an exhibit called “It’s Not Funny” at the Arab American National Museum in Dearborn, Michigan, until July 30. Art Beat interviewed him at Sankofa Video Books & Cafe in Washington, D.C., in May.

This has been edited for clarity and length.

What stages of your life or experiences influenced you to pursue political cartoons?

My family is very political. I had an uncle who was the head of the communist party. He arranged a military coup against the government — a failed coup — and was executed after that. Moving to Qatar, which is our place of refuge, myself and my generation were told to stay away from politics because you can eventually be killed for it.

For me, I really wanted to show my friends who were my age at that time that there is a way to talk about it. My father used to always bring Egyptian political cartoon-based magazines and from there, I started doing my own work.

That for me was the connection between politics and art. And it was amazing to discover it. 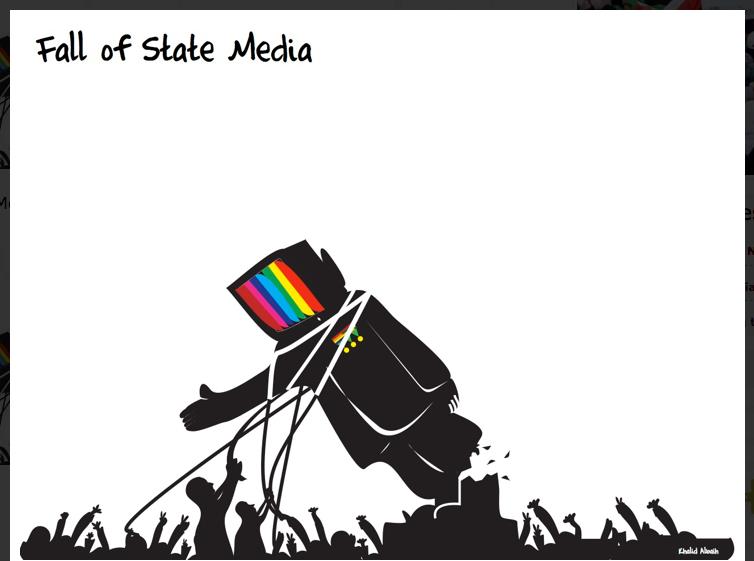 Why is social media your chosen platform for your cartoons?

The majority of the Arab world now is young and unemployed. The people that are in power, as you know, stay in power. I was going to newspapers with my work and saying, “Listen, I don’t even want money.”

“Social media and the street art was everywhere because we felt so oppressed that we needed to write on the walls to break that fear.”
They would take it and never publish, and tell me it’s too strong, we need to censor this, you’re going to get us in trouble, etc. I was once kicked out of an editor’s office because I was so persistent and then realized I don’t need this.

So I started the Facebook page and posted my work on it and then the Arab Spring happened.

How was it having your art on public display during the Arab Spring, rather than exclusively online?

Well, living in a place you can’t be politically active, you know your limits. I wanted to stencil and do street art, but I couldn’t. It would be risking my life and my safety.

But that’s why a lot of my cartoons look like stencils because they are ready to be stenciled. The canvas for me was a wall. And people gravitated toward that and used it.

When I knew I was being stenciled by activists, I really felt like I was a part of the creative dissent. The Arab Spring connected creatives together to work toward a certain thing we all felt and suffered from. And the explosion of street art and cartoons came from the fact that we didn’t have anywhere to talk.

Social media and the street art was everywhere because we felt so oppressed that we needed to write on the walls to break that fear. It was one of those signs. I felt like I was a part of this and still do. There are people doing amazing things, risking their lives on the streets; I just draw cartoons. 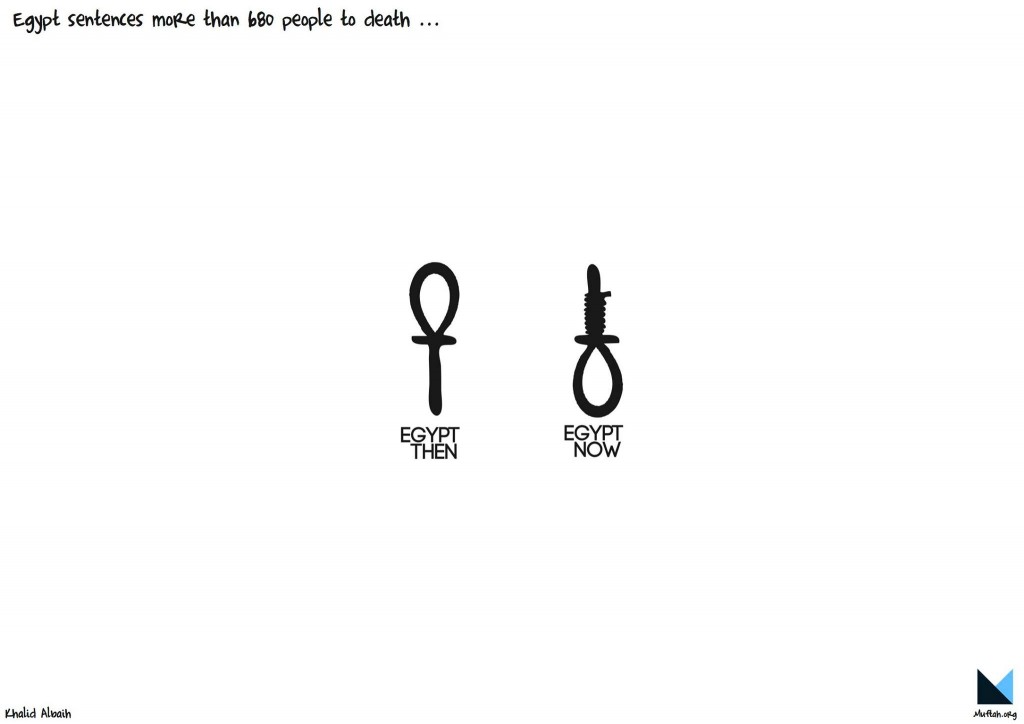 Albaih’s response to the death sentence given to ousted ex-Egyptian President Mohamed Morsi, with the ancient Egyptian hieroglyph of the “ankh” which means “life,” and a noose. Cartoon by Khalid Albaih

What do you believe is your role as a political cartoonist?

It’s about education first. I want to tell people what’s going on. I read a lot and then hope to let people know what I think about what’s going on. The second thing is creating dialogue, asking questions.

Is this really happening? What do you think about? I’m not saying I’m right, but if I’m wrong, tell me so we can talk about it.

It’s creating the feeling we can talk about our problems, accept the other opinion, and of course, push boundaries. I don’t know what the red line is so I keep pushing it to see what I can do.

Being a Muslim and living in a Muslim region, there are certain things you don’t talk about, but you find a way to do it a different way to be accepted. Because we are used to censorship, you have to talk about things indirectly.

Is there any amount of self-censorship before you deliver your message?

I don’t think there is anything that is strictly off limits. I think you can talk about anything you want to talk about, but it depends how you talk about it.

Do you think you’ve mastered that? 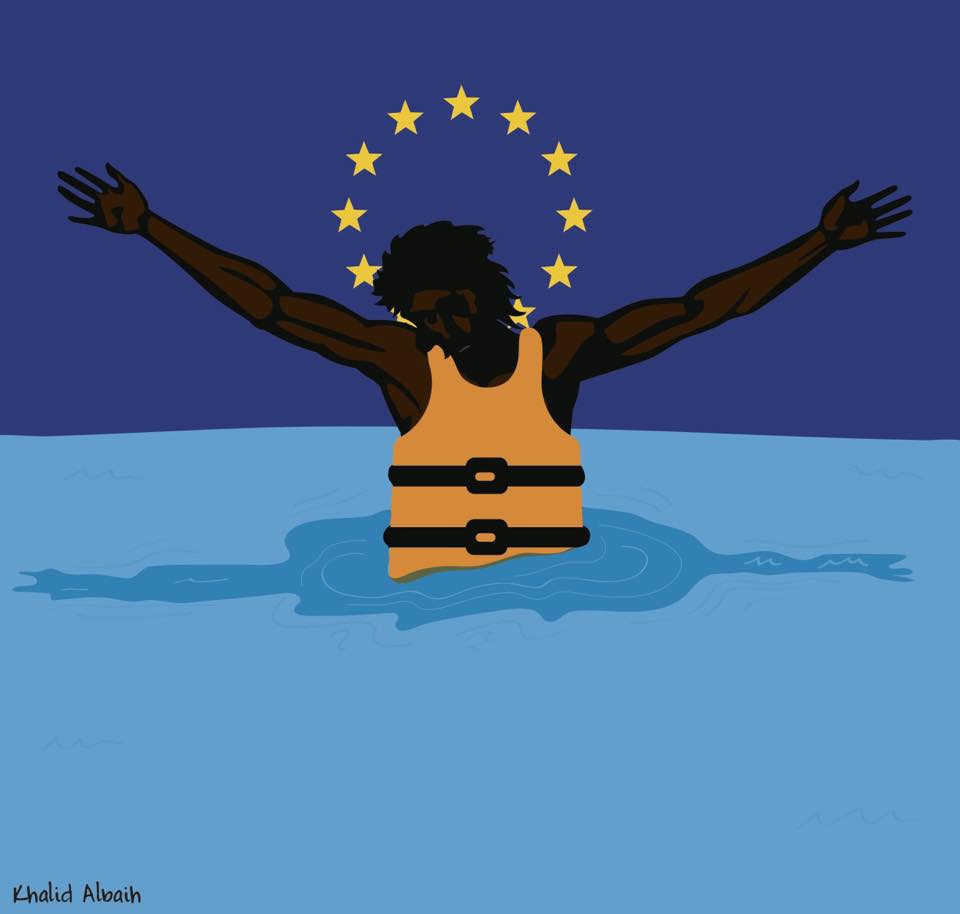 Message to the European Union after the death of several hundred migrants in Mediterranean Sea titled “Our Sins.” Cartoon by Khalid Albaih

In your Al Jazeera op-ed about the Charlie Hebdo attack, you mentioned the fear of upsetting the “wrong people.” What precautions do you take?

I use a pseudonym, which is a family name. No one knew I was being discreet about it because it is dangerous. Anywhere in the region anything can happen. I got arrested in Egypt.

Anything at any time could happen. This is what keeps me pushing. I know I may not be able to do it tomorrow so I want to do it today.

Which cartoonists do you look up to?

How is your art received in Sudan?

I say that I am from both Sudans because I grew up with one map and this is one of the only things we were proud of — being the biggest country in Africa — and now that’s taken.

Because I don’t live in Sudan, I try to visit as much I can. I use my time there as research not only in terms of cartooning but in terms of other projects with other artists.

The only thing people know about Sudan is Darfur. They don’t know facts like Sudan has the most pyramids in the world.

Also, for the young diaspora kids, I want to them to know our history, and to not overlook our country. Be proud. 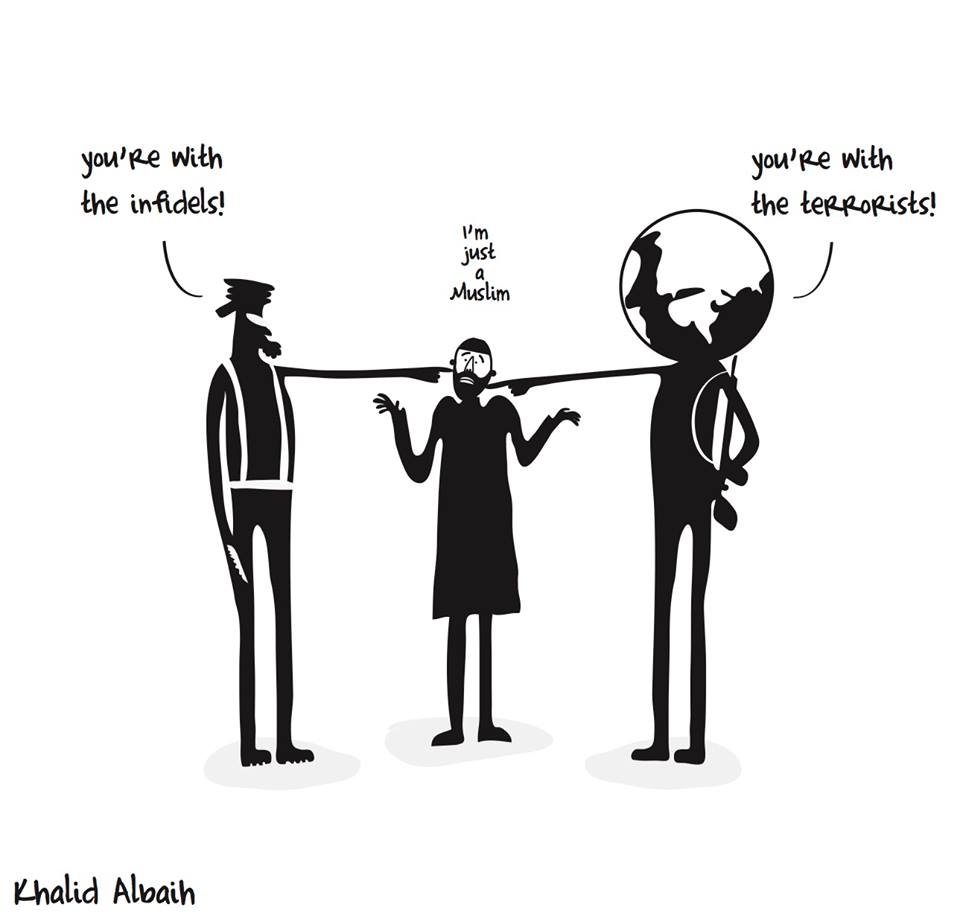 Albaih’s reaction as a Muslim after the Charlie Hebdo attack. Cartoon by Khalid Albaih

What do you hope people take away from your exhibit?

I hope a lot of conversations happen. I want to meet people that I talk to online; exchange and make the relationship human again. The Internet makes you close to people but it’s not tangible.

“Political cartoonists are the only people that never run out of business. There are always politicians messing up, people that need to be held accountable, situations that need to be understood.”
Five years ago I was drawing in my room and no one knew my name. A lot of things happened so I want to thank them. Cartoonists don’t live in a bubble. You get your thoughts and ideas from talking with people.

Is that the reason behind the title of your exhibit?

When people meet me, they expect a joke sometimes or for me to be a funny person. The situation isn’t funny where I come from. I’m reflecting the situation, which is currently absolutely not funny.

What keeps you hopeful?

Political cartoonists are the only people that never run out of business. There are always politicians messing up, people that need to be held accountable, situations that need to be understood. We need to revisit the history and the reasons as to why these events are happening now. I’m narrating that day by day through my cartoons. I want to keep doing that so people can look back and see what has happened.

Editor’s note: This post has been updated to correct an error. Khalid Albaih is Sudanese, but was not born in Sudan.