It has been said many times that the Marvel movie “Black Panther” is an important landmark. I’m not referring to its deserved critical and box office success worldwide, the many awards it has won, or the fact that it is the first film in the superhero genre to be nominated for best picture at the Academy Awards.

Instead, I’m focusing on a key aspect of its cultural impact that is less frequently discussed. Finally a feature film starring a black superhero character became part of the Marvel Cinematic Universe – a successful run of intertwined movies that began with “Iron Man” in 2008. While there have been other superhero movies with a black lead character – “Hancock” (2008), “Blade” (1998), “Spawn” (1997) or even “The Meteor Man” (1993) – this film is significant because of the recent remarkable rise of the superhero film from the nerdish fringe to part of mainstream culture.

Huge audiences will see a black lead character – not a sidekick or part of a team – in a superhero movie by a major studio, with a black director (Ryan Coogler), black writers and a majority black cast. This is a significant step toward diversifying our culture by improving the lackluster representation of minorities in our major media. It’s also a filmmaking landmark because black creators have been given access to the resources and platforms needed to bring different storytelling perspectives into our mainstream culture.

2017’s “Wonder Woman” forged a similar path. In that case, a major studio finally decided to commit resources to a superhero film headlined by a female character and directed by a woman, Patty Jenkins. Female directors are a minority in the movie industry. Jenkins brought a new perspective to this kind of action movie, and there was a huge positive response from audiences in theaters worldwide. 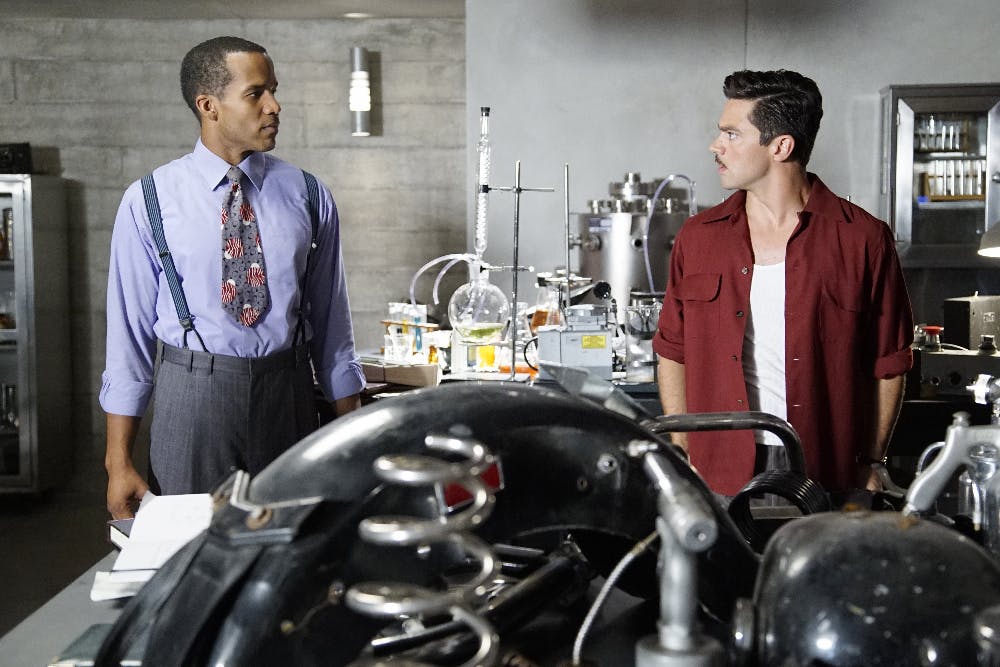 Jason Wilkes is a black scientist on ‘Agent Carter,’ whose character emerged from the author’s talks with the show’s writers. Photo via ABC Television/Creative Commons

And beyond all this, “Black Panther” also broke additional ground in a way most people may not realize: In the comics, the character is actually a scientist and engineer. Moreover, in the inevitable (and somewhat ridiculous) ranking of scientific prowess that happens in the comic book world, he’s been portrayed as at least the equal of the two most famous “top scientists” in the Marvel universe: Tony Stark (Iron Man) and Reed Richards (Mr. Fantastic). A black headlining superhero character written and directed by black artists is rare enough from a major studio. But making him – and his sister Shuri – successful scientists and engineers as well is another level of rarity.

I’m a scientist who cares about increased engagement with science by the general public. I’ve worked as a science adviser on many film and TV projects (though not “Black Panther”). When the opportunity arises, I’ve helped broaden the diversity of scientist characters portrayed onscreen.

I’ve also recently published a nonfiction graphic book for general audiences called “The Dialogues: Conversations about the Nature of the Universe.” Its characters include male and female black scientists, discussing aspects of my own field of theoretical physics – where black scientists are unfortunately very rare. So the opportunity that the “Black Panther” movie presents to inform and inspire vast audiences is of great interest to me. 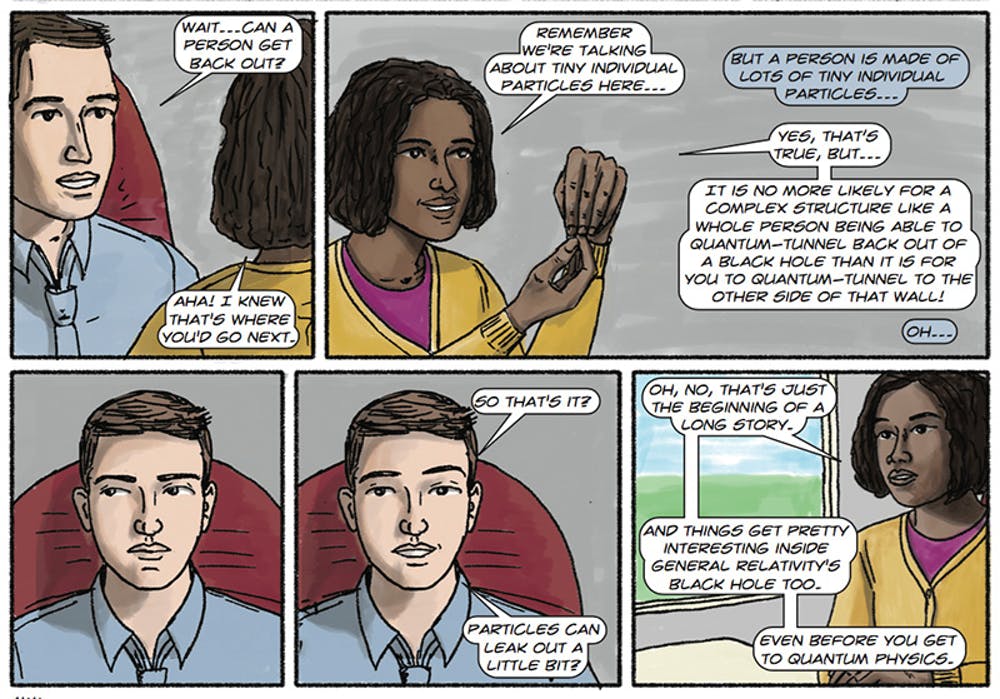 The history and evolution of the Black Panther character and his scientific back story is a fascinating example of turning a problematic past into a positive opportunity.

Created in 1966 by Stan Lee and Jack Kirby, he’s the first black superhero character in mainstream comics, originally appearing as a guest in a “Fantastic Four” Marvel comic. As a black character created and initially written by nonblack authors, guest-starring in the pages of a book headlined by white characters, he had many of the classic attributes of what is now sometimes controversially known as the “magical negro” in American cultural criticism: He ranked extremely highly in every sphere that mattered, to the point of being almost too unreal even for the comics of the time.

Black Panther is T’Challa, king of the fictional African country Wakanda, which is fathomlessly wealthy and remarkably advanced, scientifically and technologically. Even Marvel’s legendary master scientist – Reed Richards of the superhero team Fantastic Four – is befuddled by and full of admiration for Wakanda’s scientific capabilities. T’Challa himself is portrayed as an extraordinary “genius” in physics and other scientific fields, a peerless tactician, a remarkable athlete and a master of numerous forms of martial arts. And he is noble to a fault. Of course, he grows to become a powerful ally of the Fantastic Four and other Marvel superheroes over many adventures.

The key point here is that the superlative scientific ability of our hero, and that of his country, has its origins in the well-meaning, but problematic, practice of inventing near or beyond perfect black characters to support stories starring primarily white protagonists. But this is a lemons-to-lemonade story.

Black Panther eventually got to star in his own series of comics. He was turned into a nuanced and complex character, moving well away from the tropes of his beginnings. Writer Don McGregor’s work started this development as early as 1973, but Black Panther’s journey to the multilayered character you see on screen was greatly advanced by the efforts of several writers with diverse perspectives. Perhaps most notably, in the context of the film, these include Christopher Priest (late 1990s) and Ta-Nehisi Coates (starting in 2016), along with Roxane Gay and Yona Harvey, writing in “World of Wakanda” (2016). Coates and Gay, already best-selling literary writers before coming to the character, helped bring him to wider attention beyond normal comic book fandom, partly paving the way for the movie.

Through all of the improved writing of T’Challa and his world, his spectacular scientific ability has remained prominent. Wakanda continues to be a successful African nation with astonishing science and technology. Furthermore, and very importantly, T’Challa is not portrayed as an anomaly among his people in this regard. There are many great scientists and engineers in the Wakanda of the comics, including his sister Shuri. In some accounts, she (in the continued scientist-ranking business of comics) is an even greater intellect than he is. In the movie, T’Challa’s science and engineering abilities are referred to, but it is his sister Shuri who takes center stage in this role, having taken over to design the new tools and weapons he uses in the field. She also uses Wakandan science to heal wounds that would have been fatal elsewhere in the world.

If they can do it, then why not me?

As a scientist who cares about inspiring more people – including underrepresented minorities and women – to engage with science, I think that showing a little of this scientific landscape in “Black Panther” potentially amplifies the movie’s cultural impact.

Vast audiences see black heroes – both men and women – using their scientific ability to solve problems and make their way in the world, at an unrivaled level. Research has shown that such representation can have a positive effect on the interests, outlook and career trajectories of viewers.

Improving science education for all is a core endeavor in a nation’s competitiveness and overall health, but outcomes are limited if people aren’t inspired to take an interest in science in the first place. There simply are not enough images of black scientists – male or female – in our media and entertainment to help inspire. Many people from underrepresented groups end up genuinely believing that scientific investigation is not a career path open to them.

Moreover, many people still see the dedication and study needed to excel in science as “nerdy.” A cultural injection of Black Panther heroics helps continue to erode the crumbling tropes that science is only for white men or reserved for people with a special “science gene.”

The huge widespread success of the “Black Panther” movie, showcasing T’Challa, Shuri and other Wakandans as highly accomplished scientists, remains one of the most significant boosts for science engagement in recent times.

This is an updated version of a story originally published Feb. 12, 2015. Clifford Johnson is a Professor of Physics and Astronomy at the University of Southern California – Dornsife College of Letters, Arts and Sciences. Read the original article.

Left: Chadwick Boseman poses on arrival for the European Premiere of 'Black Panther' in central London on February 8, 2018. Photo by Tolga Akmen/AFP/Getty Images)

On Oscar day, science meets climate change at the movies