The Nobel literature prize will not be awarded this year, following sex abuse allegations

COPENHAGEN, Denmark — The Nobel Prize in literature will not be awarded this year following sex-abuse allegations and other issues that have affected the public image of the Swedish Academy that selects the winner.

The academy said Friday the 2018 prize will be given in 2019. The decision was made at a weekly meeting in Stockholm a day earlier, on the grounds that the academy is in no shape to pick a winner after a string of sex abuse allegations and financial crimes scandals.

“We find it necessary to commit time to recovering public confidence in the Academy before the next laureate can be announced,” Anders Olsson, the academy’s permanent secretary, said in a statement. He said the academy was acting “out of respect for previous and future literature laureates, the Nobel Foundation and the general public.”

It will be the first time since 1949 that the prestigious award has been delayed. Last year, Japanese-born British novelist Kazuo Ishiguro won the prize.

The internal feud within the Swedish Academy — which only hands out one of the six Nobel prizes — was triggered by an abuse scandal linked to Jean-Claude Arnault, a major cultural figure in Sweden who is also the husband of poet Katarina Frostenson, an academy member.

The academy later admitted in a report that “unacceptable behavior in the form of unwanted intimacy” took place within its ranks, but its handling of the allegations shredded the body’s credibility, called into question its judgment and forced its first female leader to resign.

It will be the first time since 1949 that the prestigious award has been delayed.

A debate over how to face up to its flaws also divided its 18 members — who are appointed for life — into hostile camps and prompted seven members of the prestigious institution to leave or disassociate themselves from the secretive group.

At this week’s meeting, members agreed to review the academy’s operating practices, according to a statement released by the body.

The academy said that “work on the selection of a laureate is at an advanced stage and will continue as usual in the months ahead but the Academy needs time to regain its full complement.”

The Nobel Foundation reacted promptly, saying it presumes that the academy “will now put all its efforts into the task of restoring its credibility as a prize-awarding institution and that the Academy will report the concrete actions that are undertaken.”

“We also assume that all members of the Academy realize that both its extensive reform efforts and its future organizational structure must be characterized by greater openness toward the outside world,” Carl-Henrik Heldin, the chairman of the Nobel Foundation Board said in a separate statement. 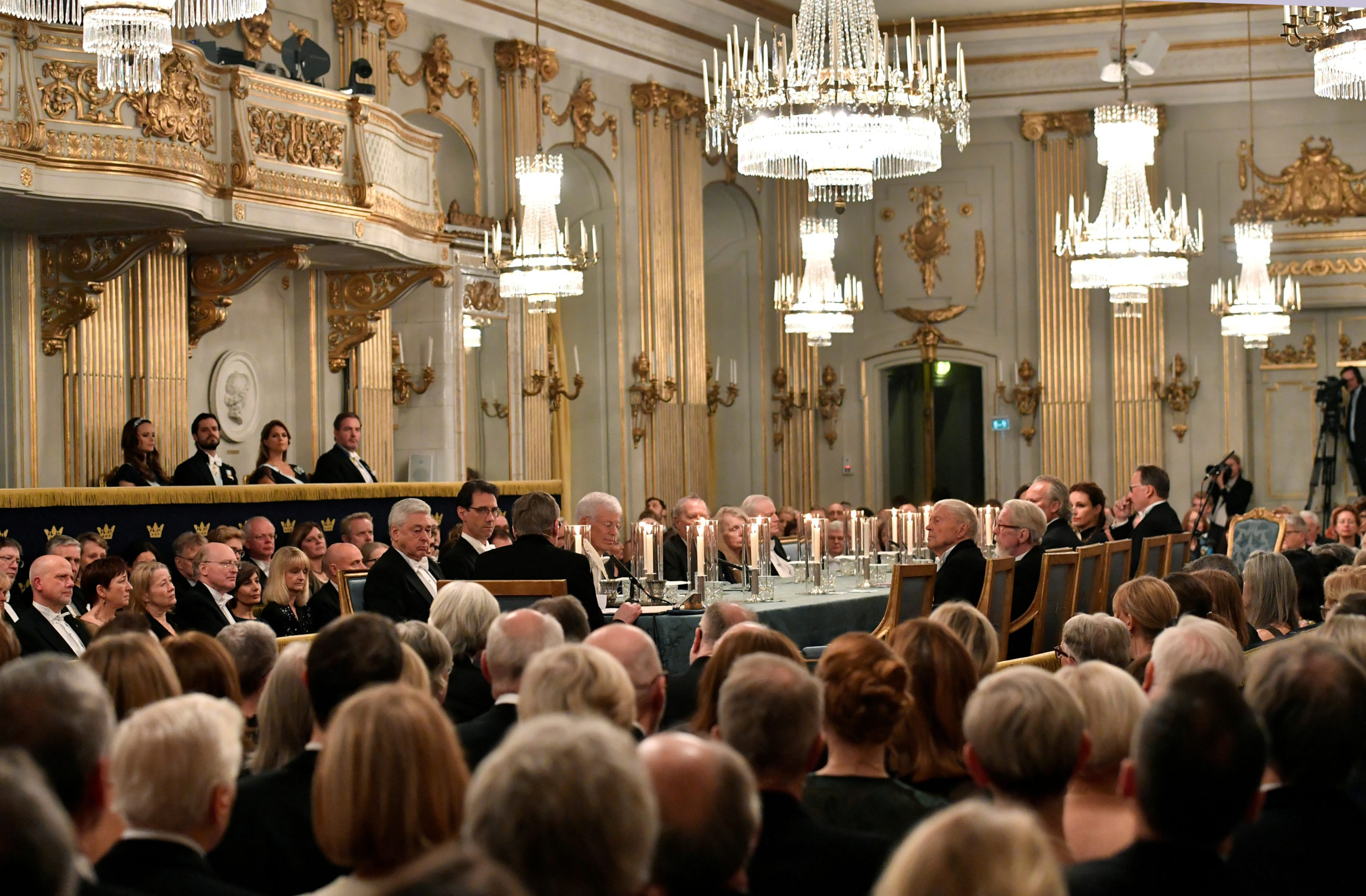 A general view of the Swedish Academy’s annual meeting at the Old Stock Exchange building in Stockholm, Sweden, in 2017. Photo by TT News Agency/Jonas Ekstromer via Reuters

King Carl XVI Gustaf — the body’s patron who had earlier suggested changes within the institution after members began to leave — said the decision “shows that the Academy now intends to focus on the restoration of its reputation.”

Arnault also has been suspected of violating century-old Nobel rules by leaking names of winners of the prestigious award — allegedly seven times, starting in 1996. It was not clear to whom the names were allegedly disclosed.

Bjorn Hurtig, the lawyer for the 71-year-old Arnault, has denied the allegations, telling The Associated Press that his client is the victim of “a witch hunt” and the claims “may only have the purpose of harming” him.

The world’s most prestigious prizes in science, medicine, literature and peacemaking have been withheld 49 times in all since the honors based on the will of Swedish inventor Alfred Nobel began in 1901.

The Nobel literature prize was not given out on seven occasions, primarily due to war but in 1935 because no candidate was deemed worthy of the prize. On a further seven occasions, the award has been postponed, as is proposed in this case.

“We’re in a crisis and it will take time to rebuild it again,” he was quoted as saying. He said the academy must be more open to the media, but at the same time not leak the name of the winner.

“We have to shut up. People mustn’t start betting and make money on that,” he told TT.

Left: Prizes for the 2010 Nobel Prize winners are seen before the award ceremony at the Concert Hall in Stockholm. Photo by Pawel Kopczynski /Reuters