This church was destroyed on 9/11. Now it’s reopening as a shrine to victims

St. Nicholas Greek Orthodox Church stood out amid the hustle and bustle of lower Manhattan.

The church started out in 1916 in a small row house that used to be a tavern. Over the years, the neighborhood around the church changed, from surrounding row houses to high rises. Developers attempted to acquire the property, but the church stayed put at 155 Cedar St., and became a familiar place for people who worked in the area. Eventually, the church, nowhere near as tall as the buildings nearby, stood alone, surrounded only by a parking lot.

“It was a little church on a lonely parking lot, and it was always open,” said the Rev. Alex Karloutsos, the vicar general of the Greek Orthodox Archdiocese of America. “People found it like an oasis.”

Because of lower Manhattan’s growth, the church was overshadowed for more than a quarter-century of its existence by two towering neighbors — the twin towers of the World Trade Center, which were built in the 1960s. That location also gave St. Nicholas an unwelcome place in history; when hijackers crashed planes into the twin towers on Sept. 11, 2001, the collapse of the buildings also destroyed the church. It was the only place of worship leveled by the attacks. 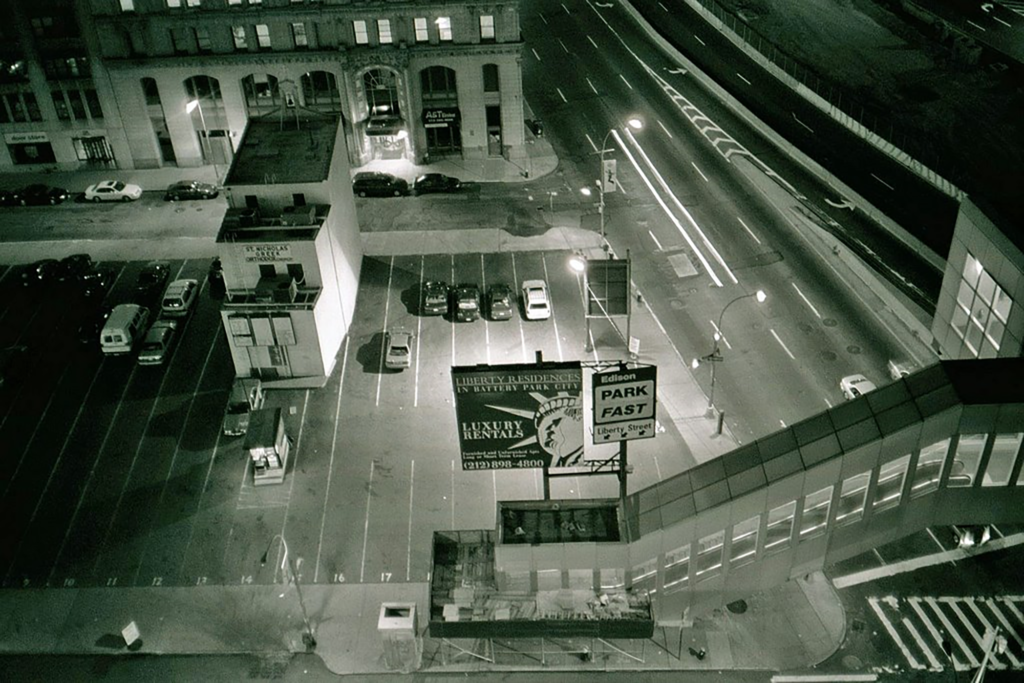 St. Nicholas Greek Orthodox Church sits in a parking lot in lower Manhattan. Developers repeatedly attempted to buy the church’s land for years. The church was destroyed on Sept. 11, 2001, when the twin towers of the World Trade Center collapsed. Photo via the Greek Orthodox Archdiocese of America.

Now, two decades later, the church is embarking on a resurrection of sorts. It will reopen not only as a functioning church for Orthodox Christians, but also as a shrine to those who died in the attacks. Most of the exterior of the new St. Nicholas Greek Orthodox Church and National Shrine at the World Trade Center will be finished for the anniversary on Saturday.

For the nearly 3,000 people who died in attacks, the shrine “is their cenotaph,” said Michael Psaros, vice chairman of a group that’s responsible for fundraising and financial oversight of the shrine’s construction called the Friends of St. Nicholas. “There is no grave marker for those that were martyred on that day, and this church is the vessel of their remembrance.”

WATCH: Remembering the 40 heroes aboard Flight 93 and how they thwarted 9/11 hijackers 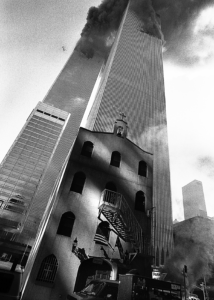 St. Nicholas Greek Orthodox sits below the twin towers of the World Trade Center before they collapsed as a result of the Sept. 11, 2001, attacks. The towers’ collapse destroyed the church. Photo via the Greek Orthodox Archdiocese of America.

The main thing the public will notice about the shrine, designed by architect Santiago Calatrava, is its shine. On Sept. 10, the day before the anniversary, the church will be illuminated for the first time since construction began. More than 1,000 LED lights inside the newly-designed, domed sacred space will light up — creating a sort of beacon of hope and faith in lower Manhattan.

“We will turn on the lights of the church from within and the church will glow to the world,” said Archbishop Elpidophoros, the current leader of all Greek Orthodox Christians in the United States.

Part of that glow will come from the Pentelic marble that covers the exterior. The shiny, white marble is the same stone that was used to build the Parthenon in the 5th century B.C. — nearly 2,500 years ago.

Just as the old St. Nicholas was a place for people of all faiths, Karloutsos said, that tradition will continue at the new church, with a non-denominational, ecumenical remembrance room inside.

It will be a place “where we hope people of all faiths, nationalities, races and religions from all over the world, by the millions, who go through Ground Zero, will walk into the church — whose doors will be open — light a candle and reflect in their own way on what occurred that day in our national shrine,” Psaros said. 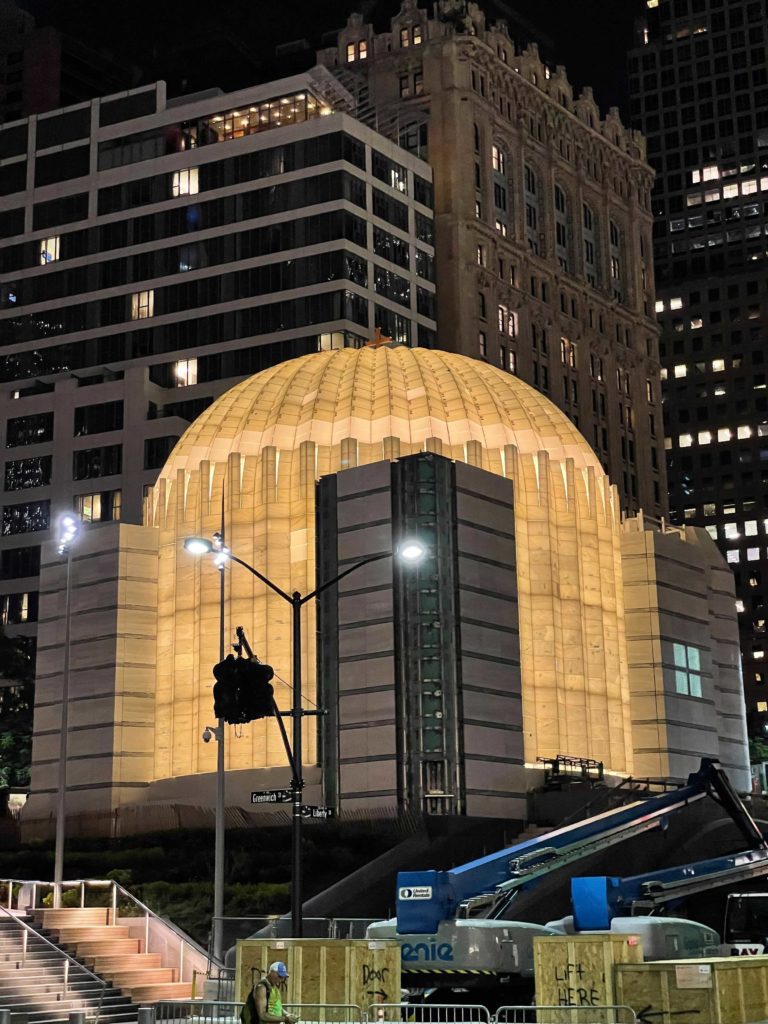 One of the ways the shrine will depict this is through icons, which are colorful and symbolic images that depict Biblical scenes, events in the life of Jesus Christ, and an array of prophets and saints. Orthodox and early churches going back to the founding of Christianity have used icons.

“According to the tradition that we have in our church, all senses have to participate in prayer,” Archbishop Elpidophoros said. “The visual part of prayer is the icon. And the icon helps the faithful to focus on prayer when they are in the church.”

Bishop Joachim of Amissos — an expert in Byzantine art — and iconographer Father Loukas, who is based at the remote monasteries on Mount Athos, Greece, are collaborating on the icons visitors will see throughout the shrine. Some of the icons, officials said, will include some modifications to memorialize and illustrate the shrine’s importance. While these icons are not ready for public viewing until the church fully opens next spring, officials gave the PBS NewsHour descriptions of what they will depict. 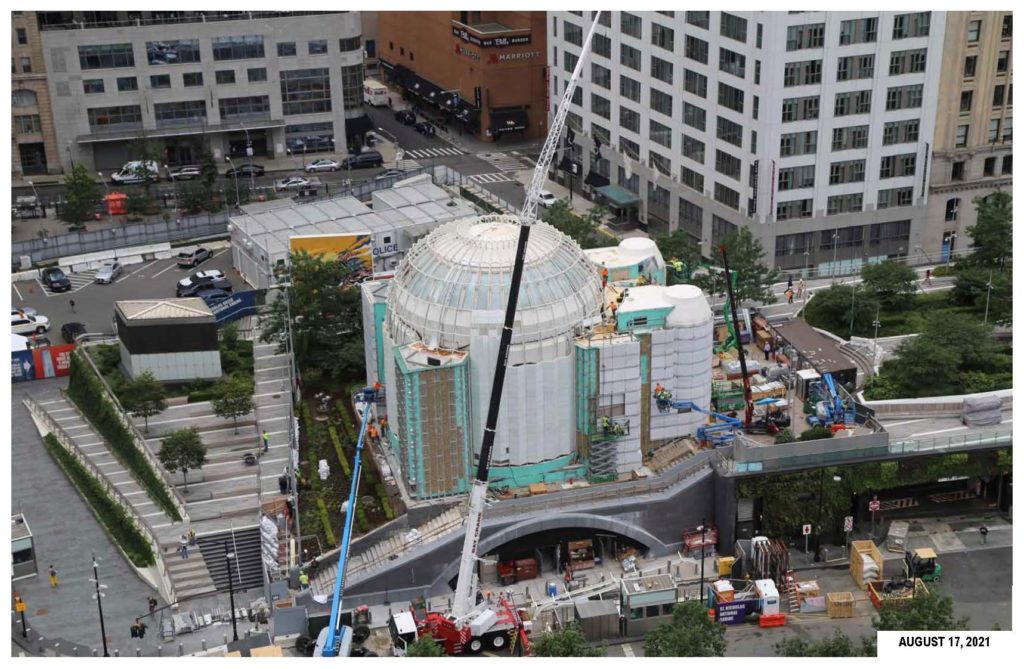 Work on the new St. Nicholas Greek Orthodox Church and National Shrine at the World Trade Center continues on Aug. 17, 2021 in lower Manhattan. Photo by NYNJPC and provided by the Greek Orthodox Archdiocese of America.

In the Orthodox icon of the resurrection, Christ is depicted lifting Adam and Eve out of the depths of Hades. Joining them in the St. Nicholas version of the icon will be policemen, firefighters and other first responders who lost their lives on Sept. 11. The icon of the Virgin Mary and Christ child that is typically shown in the apse, the area behind the altar table in the sanctuary, will include art of the skyline of New York, the Statue of Liberty, the Verrazano-Narrows Bridge, the Brooklyn Bridge and Ellis Island — the first stop for many Greek immigrants to the U.S.

An icon that will portray the events of 9/11 will also connect with the shrine’s namesake. Included as part of a seven-icon depiction of St. Nicholas’ life will be an image of the saint rescuing sailors from the sea. “But in the lower half of the icon, the sea will turn into the clouds that were above New York [and] lower Manhattan on 9/11,” said Mark Arey, a communications consultant for the Friends of St. Nicholas.

Other icons will include 20 images of the prophets in the dome’s structure, signifying the bridge from the Old Testament to the New Testament, Arey said. “The Old Testament prophets serve as intermediaries between the Word of God above them and humanity on earth below. In the Orthodox Church, their role is primarily understood as heralds of the promise of the incarnation of the Lord,” he said. 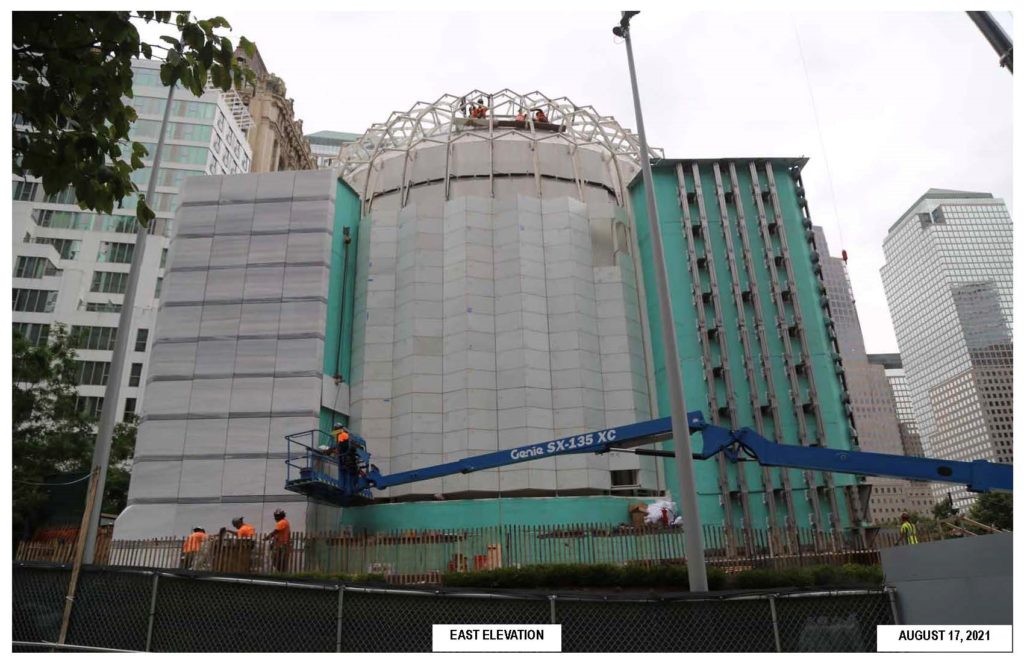 Construction crews continue working on the new St. Nicholas Greek Orthodox Church and National Shrine at the World Trade Center in lower Manhattan on Aug. 17, 2021. Photo by NYNJPC and provided by the Greek Orthodox Archdiocese of America.

Separating the images of the prophets will be 40 ribs supporting the dome — the same number as a significant historical religious structure, the Hagia Sophia. Last year, Turkish President Recep Tayyip Erdogan formally converted the 1,500-year-old Hagia Sophia — originally built as a Christian cathedral, converted to a mosque in the 1400s and then made into a museum — back into a mosque. Hagia Sophia, which translates to “holy wisdom” in Greek, is considered a site of great importance to Orthodox Christians and was a model for Calatrava in designing St. Nicholas in New York.

“Our national shrine is the daughter of the Church of Holy Wisdom,” Psaros said. The shrine’s construction “sends a statement to the world about who we are versus a lot of other places.”

Work on the shrine’s interior will continue into next year, and will be completely ready in time for Orthodox Holy Week, the week leading up to Easter, in April 2022. The church’s consecration is set to take place on July 4, 2022. As part of the ceremonies, a relic, a piece of the remains of a saint, will be placed within the altar table. In this case, the relic will be part of St. Nicholas’ right hand.

On Sept. 11, “we were immersed in this great darkness and feeling the great pain and the great loss,” Karloutsos said. “That’s why for me personally, seeing now this church — that will be like a candle lighting up and giving hope to so many. That’s better than just simply cursing the darkness.”