This guy covered the Australian desert with 50,000 lights, and it’s breathtaking

At sunset, Uluru is a blaze against an opalescent desert sky.

Then, as crimson gives way to a lavender twilight, they begin to turn on, one by one: 50,000 lights dotting a constellation on the floor of the Australian desert.

It’s been called the heart of Australia. Uluru — the sandstone monolith rising from the horizon in the middle of Australia’s Northern Territory — is sacred ground for the Anangu, who are indigenous to the area. And it has long inspired wonder among visitors, including British artist Bruce Munro, for whom Uluru has become a 23-year obsession.

Munro’s “Field of Light” installation, which opens to the public today, has been in the works for decades. Munro first thought of the concept for the project in 1993, when he visited Uluru, eight years after moving to Australia. “There is something extraordinary in the area. You do feel like there’s electricity in the ground,” he said.

He envisioned a system of lights that appeared to grow out of the ground. And, slowly, he began testing the idea in smaller iterations — in the windows of Harvey Nichols in London, then at the Victoria and Albert Museum. Later, he took the installation to the Atlanta Botanical Garden, St. Andrew Square in Edinburgh and elsewhere.

Each chapter of the project has been completely unique, shaped as much by the environment itself as the technicians who complete the installation process. For this stage, which involved nine months of preparation, Munro shipped 60,000 lights to the desert — including 10,000 backups in case of breakage — and set out on a six-week-long mission with 40 people to install the project.

“The crescendo of light grows as the sun goes down, and it breathes. There’s a sense of breathing in the environment here.” — Artist Bruce Munro

He began that process with discussions with the Anangu locals. Collaborating with them was “paramount” to the project, he said. As they installed the piece, they dubbed it “Tili Wiru Tjuta Nyakutjaku,” which Munro said translates to “Looking at Many Beautiful Lights” in Pitjantjatjara, the local language.

The project is off-grid, powered by 36 solar panels. Those panels power 144 projectors, which transmit light to fiber optic cables. “We used a very low-wattage LED projector so that the light levels are gentle. It’s not a spectacle. It’s more of a pulse of color, a pulse of light,” he said.

The piece is lit for several hours twice a day: once just before sunrise, and once after the sun sets.

“You’ve literally got sky from horizon to horizon and at night the Milky Way just pings out. You wouldn’t believe it. It is so bright you feel you can touch the stars with your hands,” he said. “The crescendo of light grows as the sun goes down, and it breathes. There’s a sense of breathing in the environment here.” 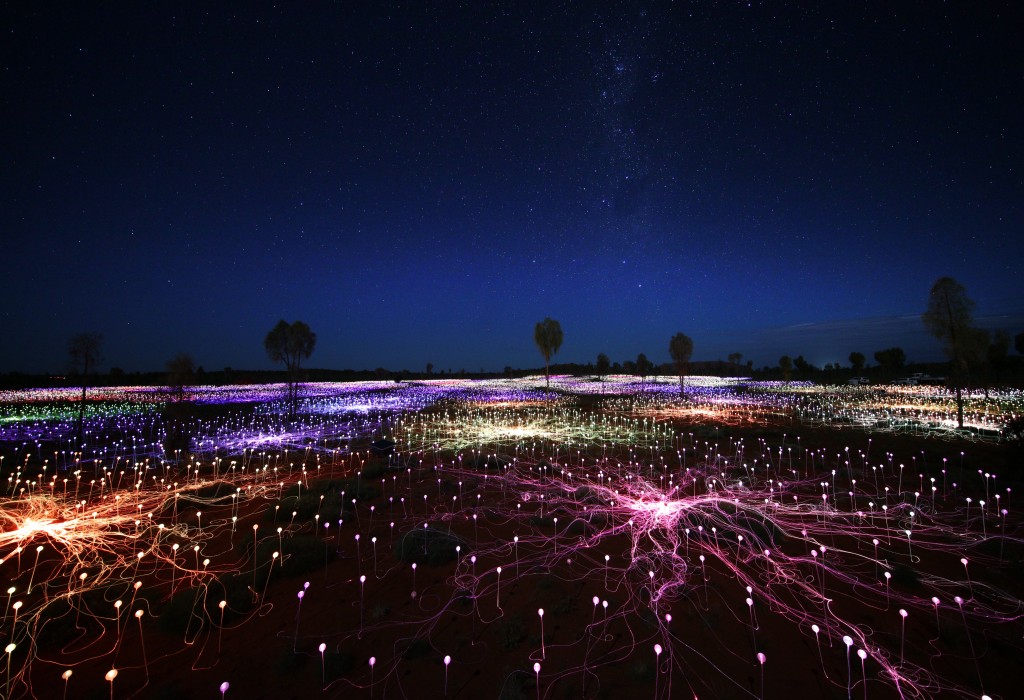 The installation has as many possible interpretations as the number of visitors, Munro said. One man who visited, a physicist, told him that it reminded him of synapses in the brain.

“The interpretations are so wide. There are people seeing body systems. There are fractals. it could be a galaxy, or it could be capillaries, veins in the palm of your hand. or it could be a river belt,” he said. “I think that’s the beauty of it — people will allow their minds to roam in a very natural and young way.”

You can see more photos of the piece below. 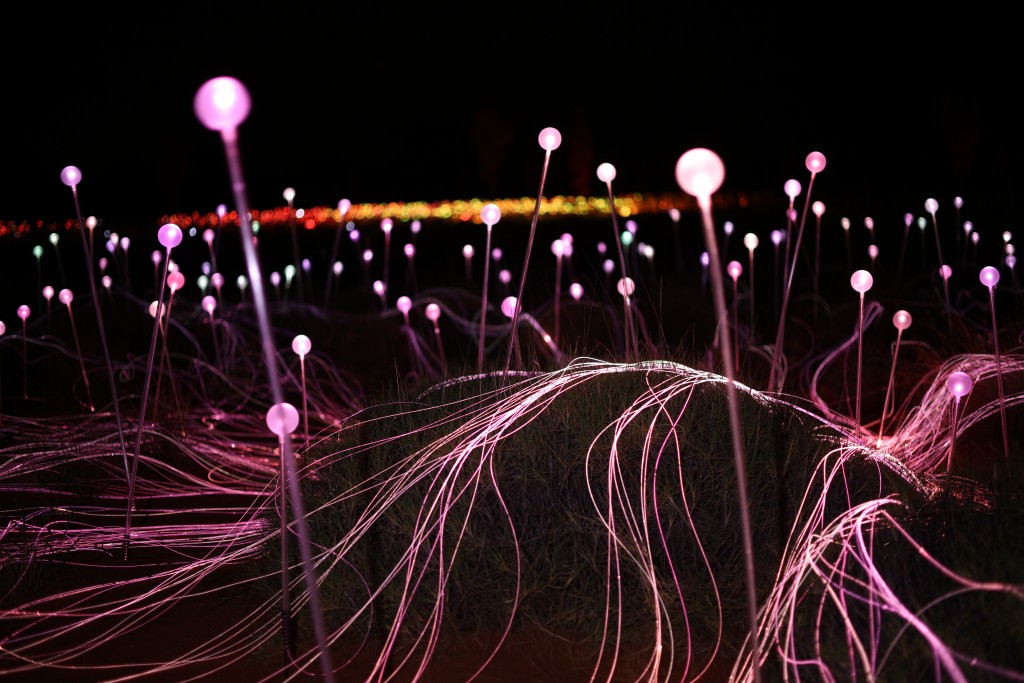 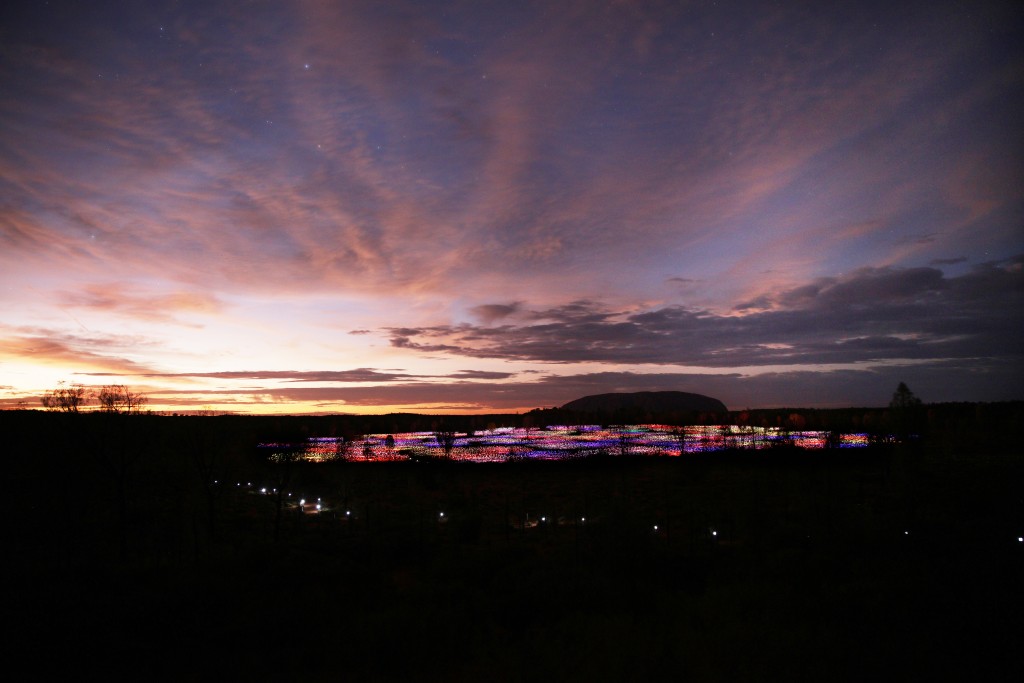 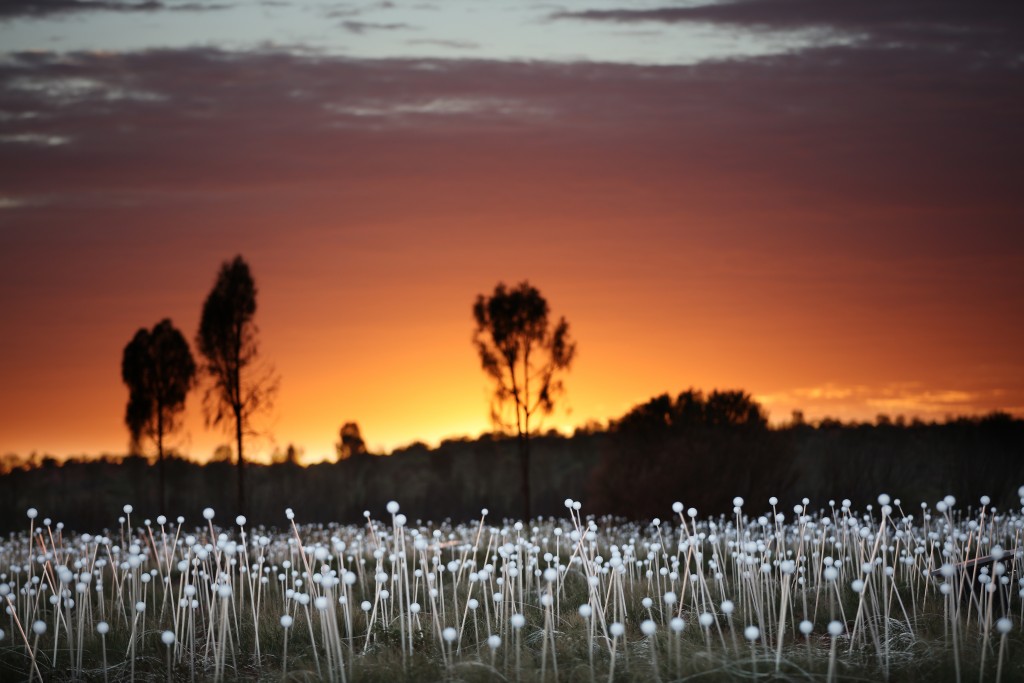