This sculptor builds what’s going on inside our heads

WIMBERLEY, Texas — The first clue that Gil Bruvel is preoccupied with what’s going on in our heads is the stainless steel human skull sitting outside his Texas home and studio.

Unlike the quintessential sun-bleached steer skull from Western lore, Bruvel’s sculpture is formed from ribbon-thick lines of steel that reflect the Texas rays, appearing to move while remaining perfectly still. 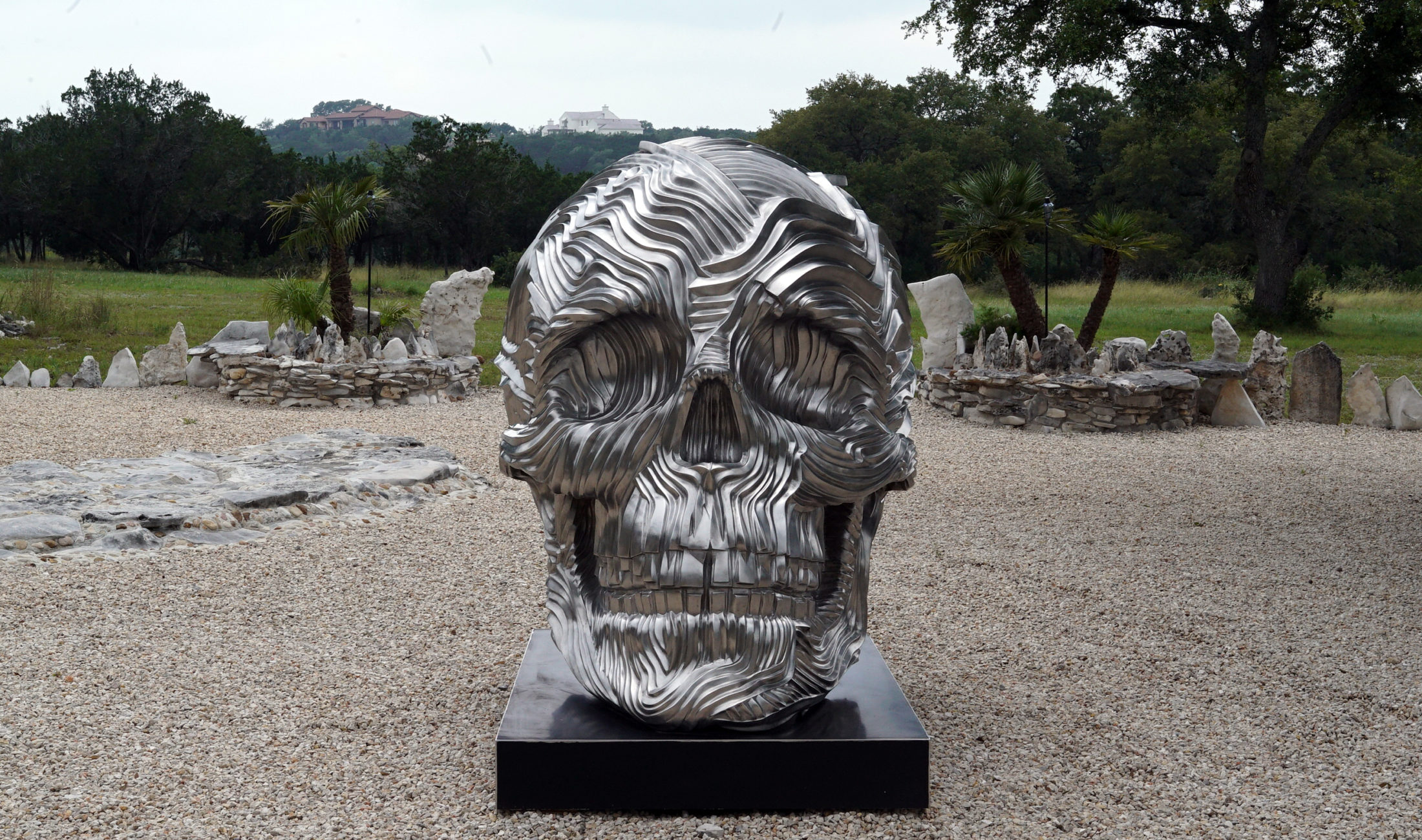 Bruvel’s “The Descent, Monumental,” which sits outside his home in Wimberley, Texas. Photo by Joshua Barajas/PBS NewsHour

From that moment, walking into Bruvel’s home is a sensory overload. Lots of artwork patiently waits in rooms and hallways as he prepares for an upcoming gallery show. The array of materials — paints, pencils, acrylics, bronze, cardboard, and more — point to a creator with many different pursuits, and many different mediums.

3D-printed figurines as small as chess pieces hang out on the shelves inside Bruvel’s workshop. There are paintings with eye-catching colors and Cubist design. Wall sculptures of layered, wooden sticks — looking almost too heavy to be mounted — have been painted into color bursts and patterns that recall a flurry of things: topographical maps, the flow of water, microscopic organisms seen under a microscope, all jutting away from the walls.

It’s a lot to take in, but Bruvel offers a lifejacket amid the abstraction. My attention is drawn to the faces. Faces at ease, eyes closed, with the slightest Mona Lisa smile. These sculptural forms are made from the same layered wood technique, but with a surprise reveal: The chaos seen in his other artworks can also be found on the back of these meditative heads, a little like the chaos inside our own skulls.

View a 3D model of one of Bruvel’s “Piercing the Sky” below. (IOS devices will be able to view the wreck in augmented reality). 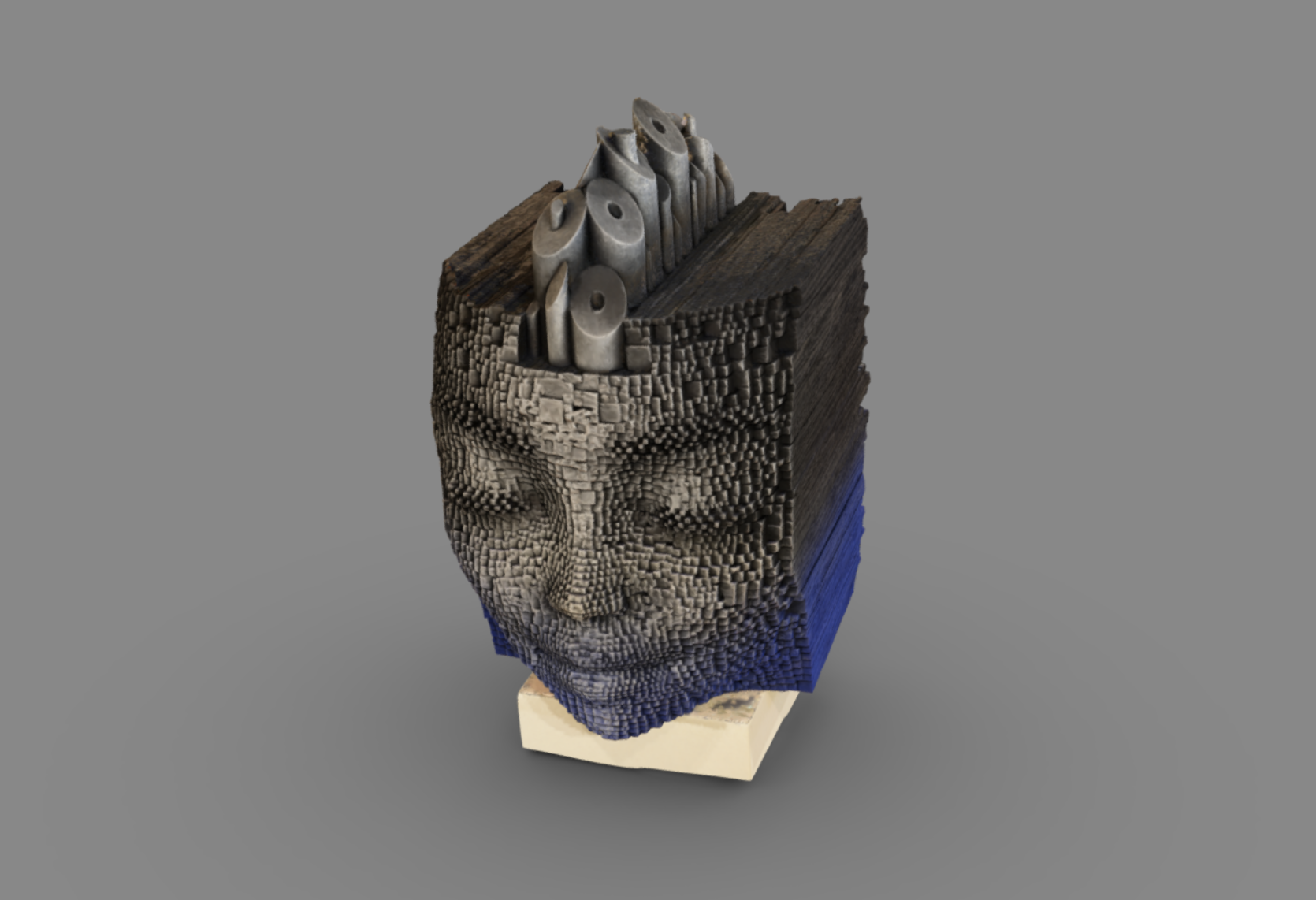 These works are part of Bruvel’s “Bending the Lines” series, in which has the mixed media artist trades steel for wood as his main material. After gluing and hammering sticks of varying lengths to form a humanoid face, he burns the wood with a blowtorch to draw out the veiny texture. Multi-colored layers of paint finishes the faces.

The PBS NewsHour spoke with Bruvel about the evolution of his work, what his faces say about the human condition and why he paints in such vivid colors.

Can you describe the medium you’re working in now?

Right now I work with sticks. I form these wall sculptures and meditative-looking faces. On one side is the actual face and on the back of the face is an abstract pattern that’s a bit of a representation of a neural pathway or emotions or state of mind and such.

Right now my focus is more on sculpting than anything else, but also, it involves a painting part. I burn the wood sticks and then I brush them off to accentuate the pattern of the wood veins and create some interesting accidents and patterns and then paint that.

Why are you focusing on wood lately?

My dad was a cabinetmaker. He was building furniture with wood carving and such, and so I trained at a young age to sculpt and carve wood. And then I went into a restoration workshop restoring old masters, going through the different centuries — 12th century to contemporary artwork — to restore. And that gave me even more education about different techniques.

I’ve also been experimenting with digital work. I did a computer game called “Light and Darkness” in 1996. It was a PC game. And that got me interested pretty early on in 3D-modeling computer technology. So, I go from this type of technology with 3D printers and such, to really low-tech, like I’m doing right now, which is stacking up sticks with nails and glue, and building out these faces. So there’s a very wide range — that seems to be a little bit extreme — but that allows me to express and keep exploring ideas. 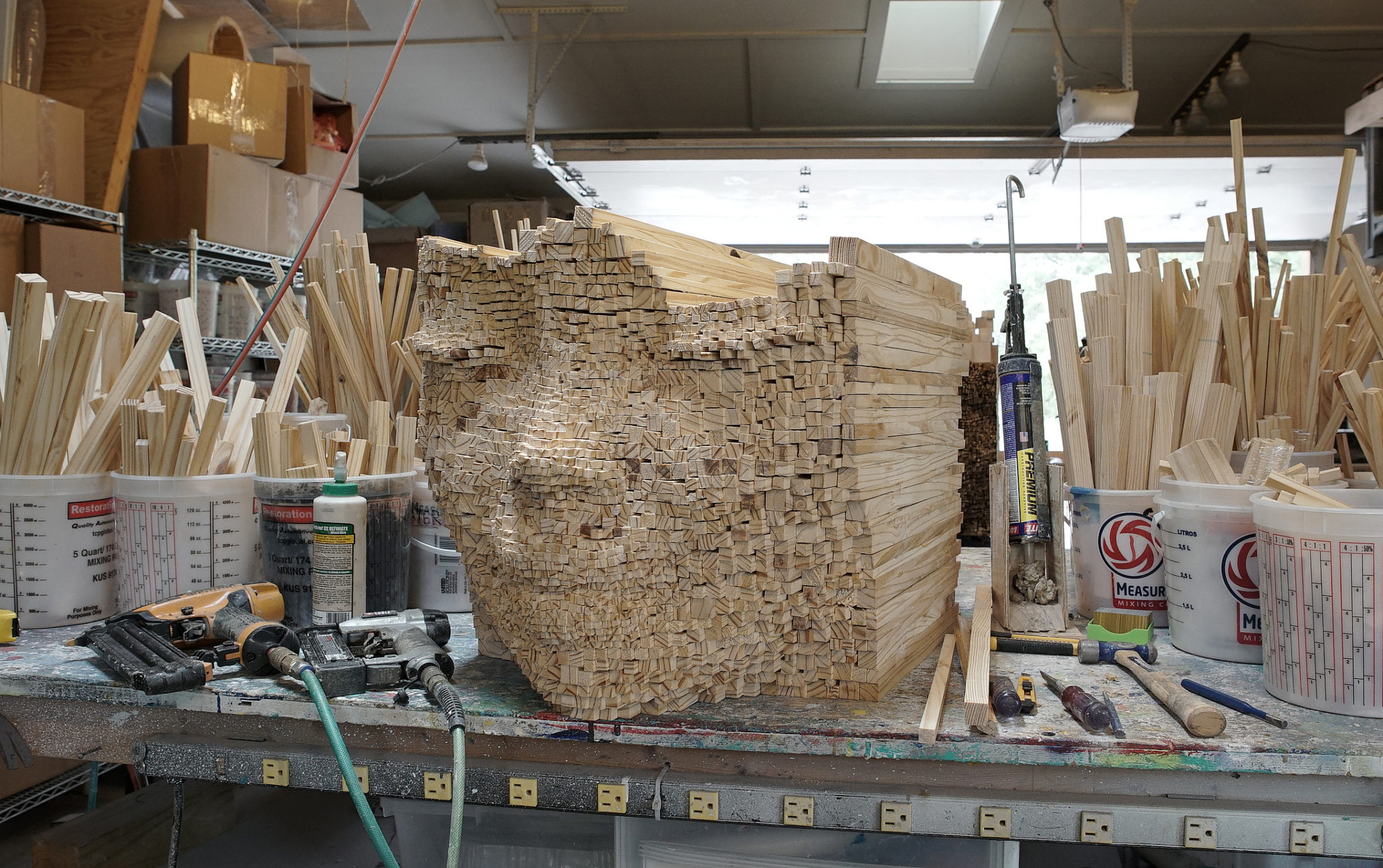 Bruvel’s meditative faces are made out of stacked wood sticks. After fashioning them into a pixelated face, Bruvel burns the wood and then paints them. Photo by Joshua Barajas/PBS NewsHour 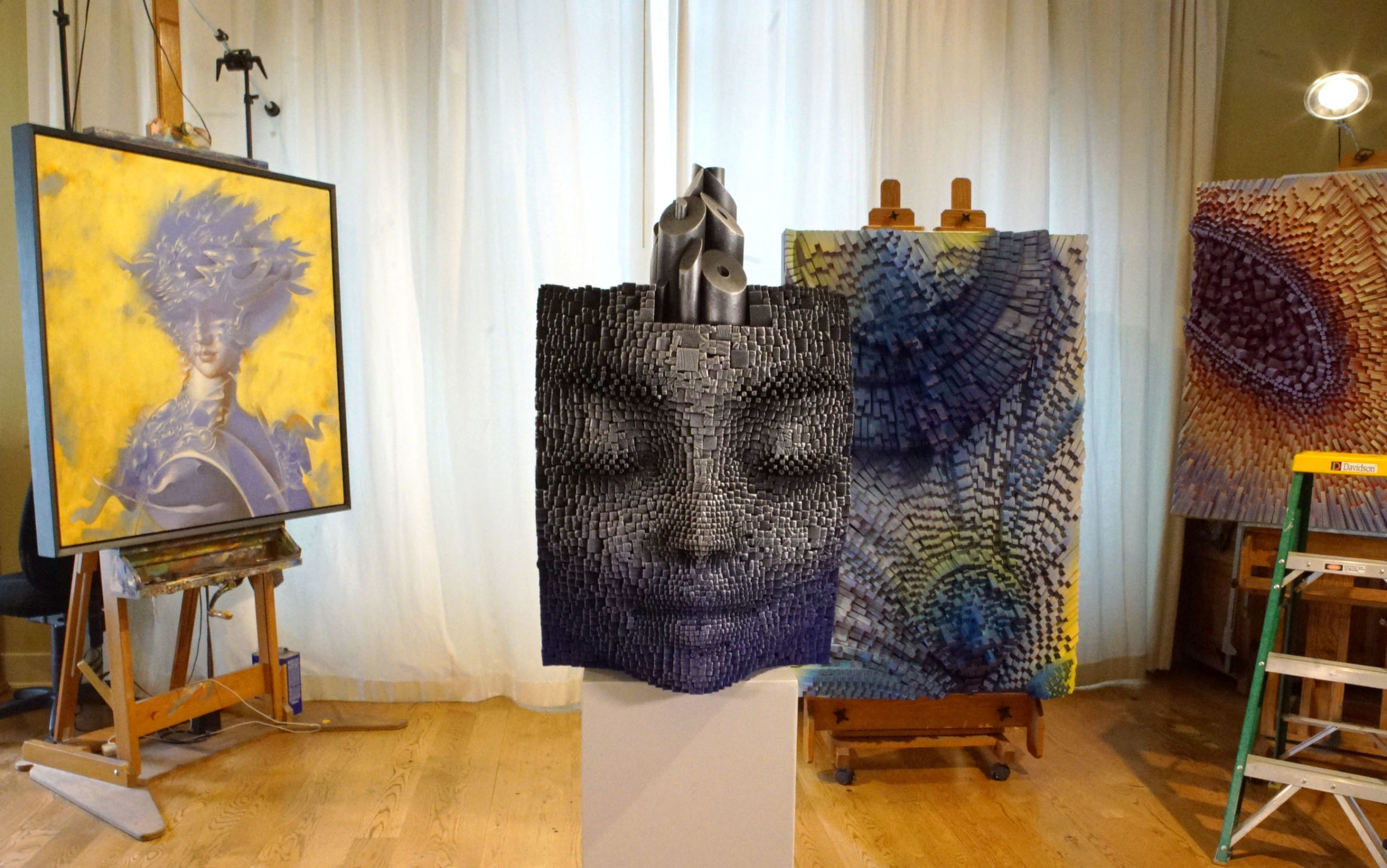 One of Bruvel’s face sculptures next to the mixed media artist’s other works. Photo by Joshua Barajas/PBS NewsHour

What’s the significance of a face? And why a meditative face?

I’ve been practicing meditation for decades, and I’ve always felt that was a source of inspiration and creativity, in the sense that meditation comes down, then cuts down the radio noise in the brain and kind of gives an opportunity to access different layers to find connections between different ideas, feelings, conversations.

I’ve been using that as an inspiration for my work, and it’s a little bit literal because it’s a peaceful, serene face, but also it’s a huge neural pathway for our own identity, how we work our way as a human condition, what are we as human beings.

So the idea of universality is important to you.

I think people relate because we see ourselves in art. This is a moment of freedom that we give ourselves to accept who we are without judgment and all of that. I think it gives us permission to be us. 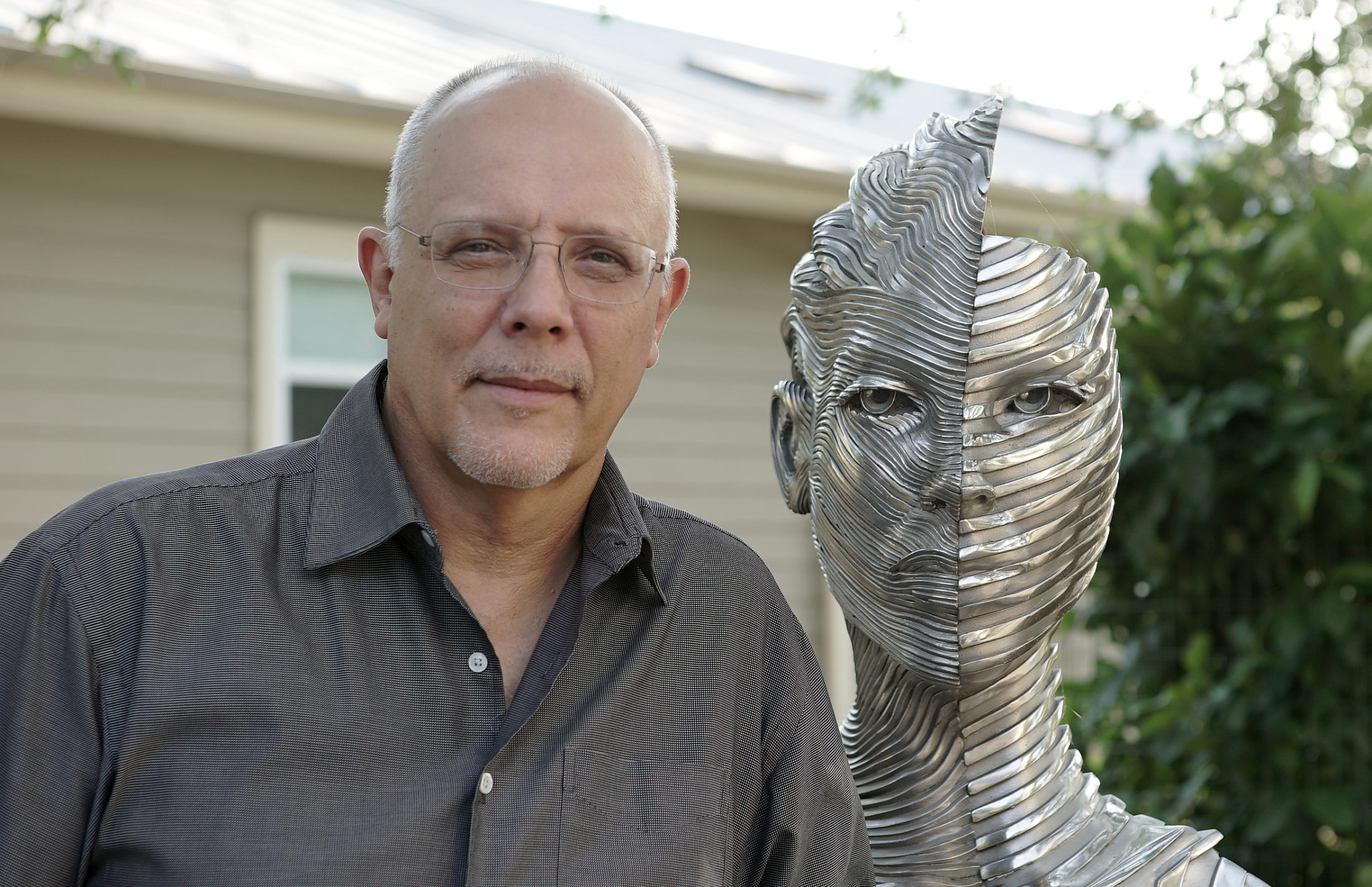 Bruvel next to one of his steel sculptures. Photo by Joshua Barajas/PBS NewsHour

Going through your process, paint seems to be one of the steps in creating these faces. How does that fit into your overall message of universality, of the human condition?

There’s one thing that I’ve experienced for a very long time. I’ve always felt the color or the taste, you know, and sound of color. And then, four or five years ago I read a book on synesthesia, and I was like, “Wait a minute. I thought that was normal.” There’s a little bit of synesthesia definitely, because I compose my colors for a sound or for a taste. So I feel a sensation, like for instance, some of the back of the colors there [points to one of his paintings] are basically for me the equivalent of sensations and experiences.

View a 3D model of one of Bruvel’s “Bending the Lines #25” below. (IOS devices will be able to view the wreck in augmented reality). 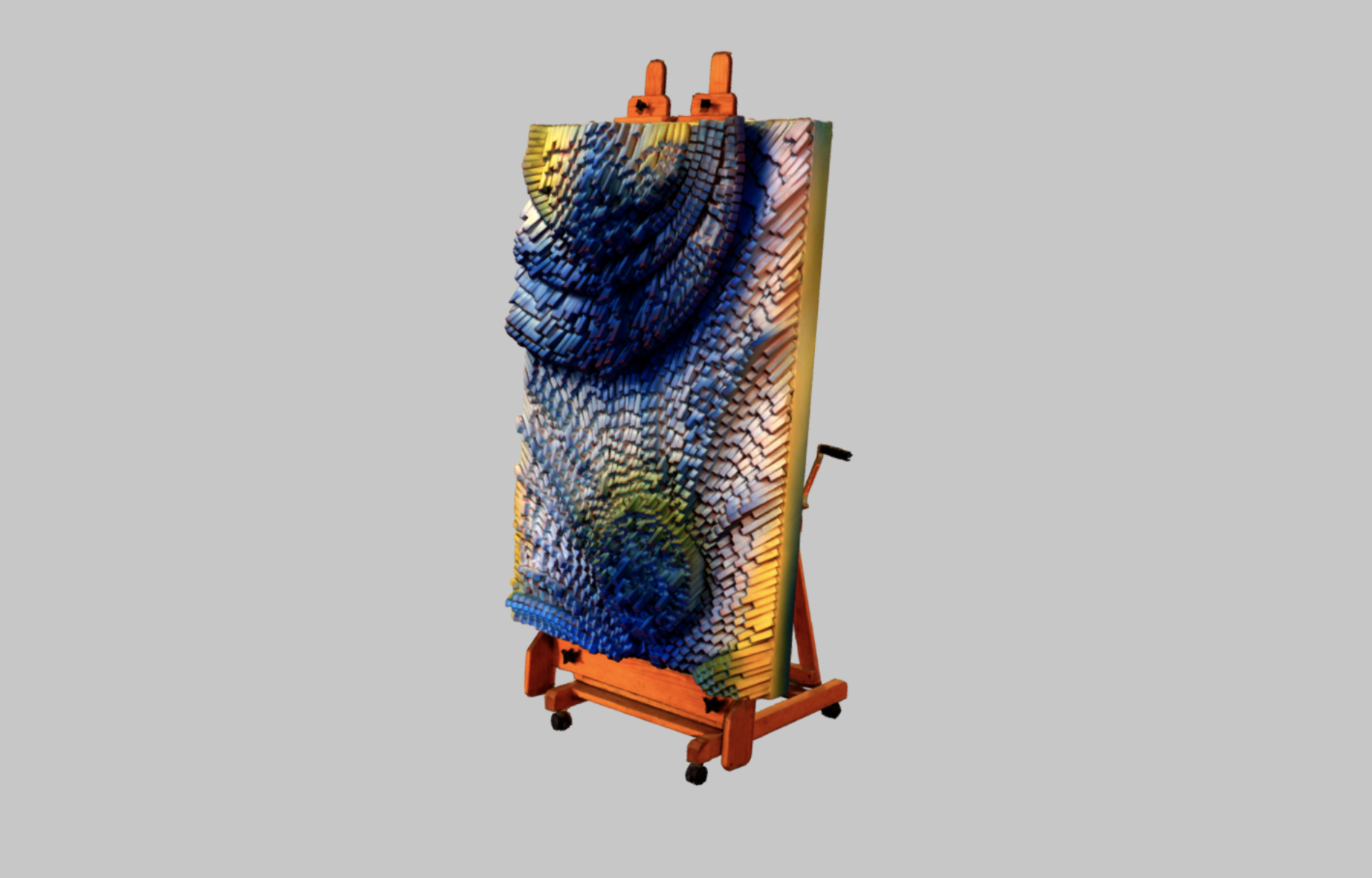 And the only way, in my opinion, to express that will be through abstraction. The reason I justify it is because it’s going through these gigantic neural pathways that creates identity which is a face, which is us. So I feel that what the colors mean to me.

Well, it’s just that you equate taste, for instance, with a color.

My family always played piano. My mom was a piano teacher. My dad was also a pianist, but he became a cabinetmaker to feed the family and my brother was a very gifted young kid playing piano. I would listen to that, and I would just see colors. As a kid, of course, it’s a complete sensory overload. It’s like reality is overwhelming.

Left: Several of Bruvel's artworks stashed in a room in his Texas workshop. Photo by Joshua Barajas/PBS NewsHour