In Erika Ryann’s voice, the moody sounds of the West

In a dimly lit space in a New Mexico high desert town, country-blues musician Erika Ryann steps up to the mic. At first it’s just her, the strum of her hollow-bodied electric guitar, and the occasional tap of her ruby-red boots. But the moment her warm, moody vocals begin, her voice both envelops and unsettles the crowd, and the room goes quiet. 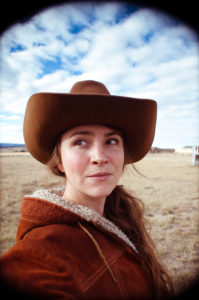 Everybody leans in closer as her lyrics sink in. Ryann, 28, sings of love and loss, of the hardiness of life and the earth, recalling years spent working farms and ranches in the foothills of central Colorado. At the end of the show, she humbly tips her hat.

The PBS NewsHour recently spoke to Ryann, who is based in Larskpur, Colorado, while on a solo tour. She has been performing and writing for the last 15 years, currently plays both solo and in five other bands, and is releasing her first solo album this coming winter.

Ryann talked about the experience of playing in honky tonks out West, writing songs on a tractor or on the road, and how necessary it is to be alone when writing.

Your sound is really moody, really unique. How would you describe it?

If I met someone on the street I’d say: “If Mazzy Star and Hank Williams Sr. had a love child, that’s me.” It’s moody and depressing and slow.

Some of the chord progressions and finger pickings are also influenced by classic country. Over time, I really embraced the country side of things, which at first I thought seemed cheesy. But now it’s like: “I don’t care, I love country music.” For me that was part of realizing who I was — that if the world turns it’s back on you, who cares, because this is who you are.

Besides Mazzy and Hank, whose sound influenced yours?

Definitely a lot of Bob Dylan. Also Lightnin’ Hopkins. There is something to his guitar playing that is so dark and rustic. The blues — the 12-bar blues — it’s played over and over and over again, but somehow it’s so addictive. And his voice being so dark. The way he plays stories about something burning down, these stories out in the country, the visual aspect of it, and it’s sometimes kind of stark.

When I was a teenager, I couldn’t put up my finger on it, because I knew I didn’t like pop country music, but I liked country music. Then, when I was 19, I found Patsy Cline and Hank Williams. Now I’m a classic country nerd. That history is important.

Backing up a bit, how did you first come to music?

I’ve been singing literally forever. I started doing musical theater when I was a little kid. When I was 14, I was gifted my first guitar. I taught myself from an old Beatles soundbook, which is great because I knew how the songs were supposed to sound, so if it wasn’t coming out of my fingers right, I knew how to fix it. Everything snowballed from there, and I started writing songs.

I spent the majority of my childhood in Parker, Colorado, which was little family farms and ranches and lots of dirt roads back then. Now, it’s huge. When I was 11, we moved out to Larkspur, Colorado, to a little forest property in the hills. It’s beautiful out there, but definitely far from everything. I spent a lot of time isolated growing up, and that was probably more formative than I give it credit for.

How did that isolation shape your writing?

I have to be completely alone to write. Sometimes at a show, I’ll write down a few lyrics but it doesn’t amount to anything. It’s usually driving around and ruminating and spending time alone. It’s going into that head space. It’s like when you have an argument with a loved one, and then are hashing it out again–like, this is what I wish I could tell this person, but for some reason, you just can’t say those things to a person, whether they’re good or bad.

One day I wrote “Motel Down the Road” while riding out on a tractor. It was on the first farm I managed, which was 20 horses or so, but I was also raising some 600 rare breed poultry birds. Every day I had to take the tractor to a cliff to spread manure. I had this whole ordeal of picking up these dead frozen birds from a meat locker and taking them to Simla, Colorado, in the middle of nowhere, in an unreliable truck, and then coming back to the farm. I think that’s the only full song I’ve written on the tractor. Usually you can’t because when you’re trying to drive a tractor, it’s really loud — too loud to sing along. 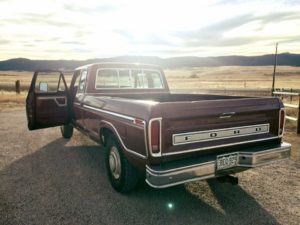 I have a big stinking crush on my truck. It’s a ‘79 ford F250. It’s got a 460 engine and a leaky carburetor. I’ve got to replace my brakes when I get home. It’s taught me about mechanics, like when things break down, a radiator blew, then it’s like: “I guess I’m going to replace a radiator today.” I like doing things for myself. So many women are raised in a world where you’re never going to be hired to manage a farm or told you can’t be a mechanic, but that’s not true, you can do it.

What’s the story behind the song, “Find A Way To Me,” which is very beautiful, very visual?

For a few years, I lived on this organic farm out in northeastern Colorado, and the summer before I moved there, as I was just getting to know the person I was seeing at that time, we had a huge flood. The streets of Denver were flooded; it was just nuts. That’s what the “after the flood” portion is about. [“I know times have been hard, and I’m sorry, my love / but will you find a way to me / after the flood.”]

The flood in the song is an actual flood, but also in relationships and life in general, you go through hardships. It’s about finding a way to me after the flood–that if we get through this I’ll be there.

Another line is: “’Cause if you’ll have me, I’m yours for the rest of my time / But if not, leave me under the winter rye.” On that farm we planted a big field of winter rye, which we ended up selling to make whiskey. It’s a beautiful plant that grows tall like wheat. There’s something romantic to the crop itself, and it meant a lot to me. The rest of it is your average sappy love song.

You play in a lot of honky tonks. How is the experience of playing there different than another venue you might play in?

My favorite legitimate honky tonks I’ve played, it’s typically a drive to get out there. A bar I really like is out in or near Eaton, Colorado, and it’s one of the last bars you can smoke in, and the bartender lights a candle and tells you how the family is doing. The space–there’s so much leg room. That’s part of Western culture, taking up space, having room to breathe. In honky tonks, there’s something really satisfying about boot heels on old wooden floors. A casualness, but also a pride and respect in the culture, and knowing the music and ranch brands or historic families, or the history of the area and old properties. People talk about how the hay fields are doing or how the wind is changing, or how that’s different from last season. That’s the typical topic of conversation there versus in the city where people might talk about a graphic design project they’ve been working on.

You’re in something like five different bands, right, in addition to your solo projects? When can folks expect this new solo album?

Right. So in addition to the solo project, I’m in a country swing duo called Ryann and Lee. I’ve never been in a band with another girl, and we just bounce off each other, and the energy is hilarious. I also play in a cosmic country rock band, U.S. Tygers. 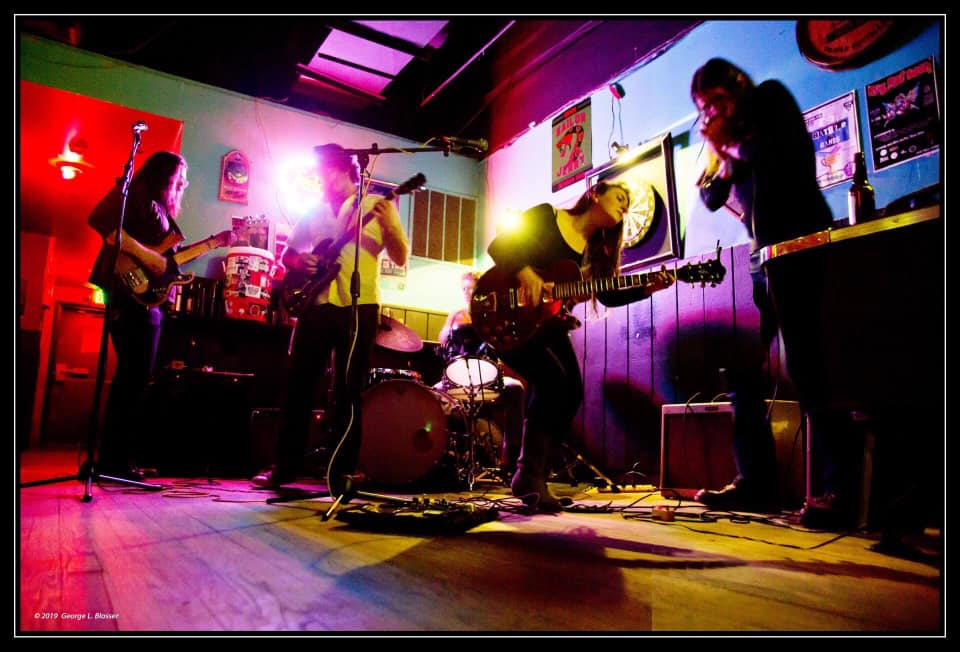 High Plains Honky is a honky-tonk band. I’ve been singing with my friend Hunter Burnette. And then there is the Hi-Dive Blues Band, a house band for this bar we all work and play shows at all the time. I’m just like a crazy person all the time.

I’ve had so much time to think about what I’m going to do with the album. Over the past few years, I’ve had some incredible connections with musicians I admire so much, so it’s going to be a cornerstone of blues and country and a little folk. I want to get the album done for myself and also to showcase the musicians in my community, what we’ve built and how supportive we are of each other. Sometimes it feels like: How did I get so lucky?

Lastly, let’s leave people with the “Tiny Desk” submission you sent to NPR. It involves a horse, and it is pretty amazing.

In the video, my forever baby, TR the horse, knocks over my desk. None of that was planned. My co-ranch hand brought the desk out to the corral, it was crazy windy, and I was trying to get it shot before the wind knocks it all down. As she starts filming, I can see the horses, and you can hear the munching in the background. And then TR walks into the frame and looks directly at the camera and then looks at me. It’s so cute and tender, he’s checking out what I’m doing, and then … the desk is history. (Laughs) At first it was a little disappointing that he knocked over the desk, but then it was also kind of perfect.

READ MORE: How female musicians amplify each other when the industry won’t

Left: Erika Ryann performing in Carbondale, Colorado, in 2017. She opened up for Band of Heathens. Photo by Erika Ryann