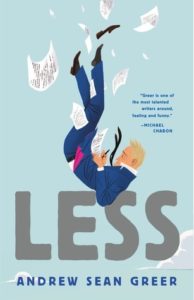 Our June pick for the PBS NewsHour-New York Times book club, “Now Read This” is Andrew Sean Greer’s novel “Less.” Become a member of the book club by joining our Facebook group, or by signing up to our newsletter. Learn more about the book club here.

In Andrew Sean Greer’s novel “Less,” we watch the bumbling and endearing protagonist Arthur Less take on various gigs in countries around the world, all to avoid attending an ex-boyfriend’s wedding.

For one of his stints, Less works as an English teacher in Germany, where he barely speaks the native language. In his typical comic fashion, Less assigns the students a variety of strange (yet also possibly useful) writing exercises.

For the Now Read This book club, Greer replicated three of those exercises, on “omission,” “order” and “beginnings.” Leave your answers to the exercises in the comments session or on our Facebook group, where some of your responses will be featured.

Authorial voice is often as much what you leave out as what you put in. Using Joyce’s famous “Molly Bloom” monologue at the end of “Ulysses” and the provided bottle of correction fluid (or your computer backspace key), make the passage your own:

the day I got him to propose to me yes first I gave him the bit of seedcake out of my mouth and it was leapyear like now yes 16 years ago my God after that long kiss I near lost my breath yes he said I was a flower of the mountain yes so we are flowers all a womans body yes that was one true thing he said in his life and the sun shines for you today yes that was why I liked him because I saw he understood or felt what a woman is and I knew I could always get round him and I gave him all the pleasure I could leading him on till he asked me to say yes and I wouldnt answer first only looked out over the sea and the sky I was thinking of so many things he didnt know of Mulvey and Mr Stanhope and Hester and father and old captain Groves and the sailors playing all birds fly and I say stoop and washing up dishes they called it on the pier and the sentry in front of the governors house with the thing round his white helmet poor devil half roasted and the Spanish girls laughing in their shawls and their tall combs and the auctions in the morning the Greeks and the jews and the Arabs and the devil knows who else from all the ends of Europe and Duke street and the fowl market all clucking outside Larby Sharons and the poor donkeys slipping half asleep and the vague fellows in the cloaks asleep in the shade on the steps and the big wheels of the carts of the bulls and the old castle thousands of years old yes and those handsome Moors all in white and turbans like kings asking you to sit down in their little bit of a shop and Ronda with the old windows of the posadas 2 glancing eyes a lattice hid for her lover to kiss the iron and the wineshops half open at night and the castanets and the night we missed the boat at Algeciras the watchman going about serene with his lamp and O that awful deepdown torrent O and the sea the sea crimson sometimes like fire and the glorious sunsets and the figtrees in the Alameda gardens yes and all the queer little streets and the pink and blue and yellow houses and the rosegardens and the jessamine and geraniums and cactuses and Gibraltar as a girl where I was a Flower of the mountain yes when I put the rose in my hair like the Andalusian girls used or shall I wear a red yes and how he kissed me under the Moorish wall and I thought well as well him as another and then I asked him with my eyes to ask again yes and then he asked me would I yes to say yes my mountain flower and first I put my arms around him yes and drew him down to me so he could feel my breasts all perfume yes and his heart was going like mad and yes I said yes I will Yes.

Here is an example from a former student:

You have probably learned, from telling stories to friends, that the order in which you tell things is nearly as important as the story itself. What follows is a passage from Nabokov’s Lolita. The sentences have been separated and jumbled. Arrange them in whatever order you like to create the story you want:

Why do faucets sometimes whine so horribly?

Let her read it again.

I set out two glasses (to St. Algebra? to Lo?) and opened the refrigerator.

She will not recall details.

The little pillow-shaped blocks of ice–pillows for polar teddy bear, Lo–emitted rasping, crackling, tortured sounds as the warm water loosened them in their cells.

Carrying the glasses, I walked through the dining room and spoke through the parlor door which was a fraction ajar, not quite space enough for my elbow.

Write a fragment and show it to her or leave it lying around.

I bumped down the glasses side by side.

I poured in the whiskey and a dram of soda. She had tabooed my pin.

Bark and bang went the icebox.

It roared at me viciously while I removed the ice from its heart.

A first sentence can be many things. It can be the “thesis” of the novel, encapsulating the themes; it can tell the ending of the novel (without the reader realizing it); it can begin in the middle of action and captivate, and sometimes confuse, the reader; it can introduce the narrator and the style to come. But it is, obviously, the reader’s first contact with the story to come, and is the first impression.

“The Waves,” by Virginia Woolf:

Real sentence: “The sun had not yet risen.”

Winning sentence: “I was too far out in the ocean to hear the lifeguard shouting, ‘Shark! Shark!’”

“The Optimist’s Daughter,” by Eudora Welty

Left: James Joyce's "Ulysses," which is referenced throughout the comic novel "Less."