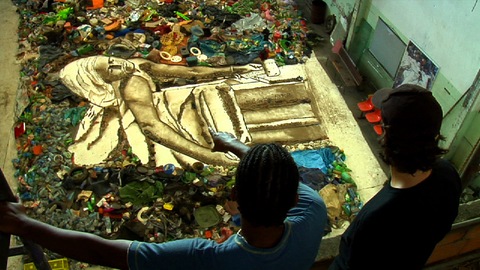 On Thursday’s NewsHour, we’ll feature an excerpt of the film “Waste Land,” which follows renowned artist Vik Muñiz as he journeys back to his native Brazil to the world’s largest garbage dump on the outskirts of Rio de Janeiro to photograph an eclectic band of catadores — self-designated pickers of recyclable materials. It’s part of our series, in partnership with The Economist magazine, showcasing the art of filmmaking.

Since its release, the film has raised awareness in Brazil about the work of the catadores, and there are now efforts to professionalize what they do as part of the country’s overall movement to increase recycling. Find out where the catadores featured in the film are now.

We asked producer Angus Aynsley to tell us about the making of the film:

The experience of the making of our film “Waste Land” has been truly extraordinary. What started out as a “simple” short film about art and the artist Vik Muniz, transformed into this much larger story that took us from the relatively safe confines of London and New York to this surreal environment of Rio de Janeiro and the world’s largest landfill, Jardim Gramacho. What we thought would be over in three weeks eventually took over three years. None of us expected this when we embarked on this project.

Of course, the reason for this is the story that we found, the characters that appeared and the events that then transpired. At each stage it just kept getting more interesting and we as filmmakers just had to keep going and allow the story to unfold in front of us. Even then, we kept thinking that at various stages we were nearly finished and then something more would happen which required us to continue.

Initially, there was Vik Muniz, a truly brilliant person and talented artist who we realized early on may take us on a longer journey than your regular art film. Then Brazil, this vibrant and amazing country that we discovered for the first time on the coattails of Vik. Next we found the otherworldliness of the Jardim Gramacho garbage dump. Finally, and most importantly, we stumbled upon the most amazing group of characters, the “catadores” or scavengers, of Jardim Gramacho.

With Vik then mixing together his persona and the art project we suddenly found this beautiful story of transformation taking place on multiple levels. First, this alchemical change of the physical garbage into works of art. But much more importantly though was the transformation of the catadores from people essentially viewed and treated as garbage by society into these wonderful, beautiful and inspiring characters. Of course, they had been this way all along, it just took this experience for the rest of us at large to realize this, and maybe for them to realize it as well.

Most importantly is the continuing story of the transformation of the catadores beyond the film itself. Never did we think this project would have the ongoing impact in Brazil and result in the change in laws and perception of the entire “catadore” community throughout the country. This has been truly humbling and still difficult to grasp for us all who just set out to make a cool little art film.