Watch the ‘American Dream’ melt, and other artistic moments at RNC, DNC

Seventeen-year-old Naudia Loftis stands in front of a small crowd that has gathered in Cleveland’s Kinsman neighborhood, holding signs that read “Value Our Lives,” “Pray for Peace,” or “Don’t Kill Just Chill.” As the group turns to face her, she begins to lead them in a chant: “We are the change!” they shout together.

Loftis is one of the subjects in “The Fixers,” series of short films that document Cleveland from the perspectives of several individuals outside the political elite. It’s unlikely that any delegates would visit Kinsman, where Loftis grew up, Kate Sopko, a Cleveland-based artist who coordinated the project, said.

Sopko, and other artists working around the conventions in Cleveland and Philadelphia, want to address what they see as a gap between the concerns of citizens and the political machine that is using their cities as a stage. PBS NewsHour spoke with the artists behind several of these pieces about how they want to contribute to the public conversation around politics.

When a journalist visits a foreign country, a “fixer” who is connected in the area can give them the local’s guide to town.

For the documentary series “The Fixers,” Sopko worked with six different filmmakers to film “fixers” from various neighborhoods in Cleveland, discussing their insider’s take on the city’s social and economic issues.

Christina Vassalo, executive director of the SPACES Gallery in Cleveland that hosted screenings of the films, said the project came from the question: “If we’re going to have all these delegates and these political decision makers, and they’re only going to be very concentrated in this compact area downtown, where do they get to see how real people live in this city?”

One film follows Loftis, who created the “Value Our Lives” campaign in Cleveland in part to honor her cousin, who was shot and killed in 2009. The film shows Loftis interviewing friends and family about their experiences growing up in Kinsman and the challenges the community has faced, including gun violence and drugs.

Another film discusses police violence in Cleveland, which is currently under federal investigation for its police department’s use of force. “We’re the first city that’s ever hosted a political convention while under federal oversight for police violence,” Sopko said.

The federal funding allocated to Cleveland for the convention helped purchase weapons for the police department, which Sopko said is a cause of concern for many of the people who appear in the film. “When you inherit a political convention, you also inherit federal money toward a lot of equipment that the police then have available to them in years to come,” she said. “People in the film speak directly toward what that means for communities on the ground here.”

The films are available online and screened at the SPACES Gallery in Cleveland from May 20 to July 21.

Cleveland women use the body as a political statement 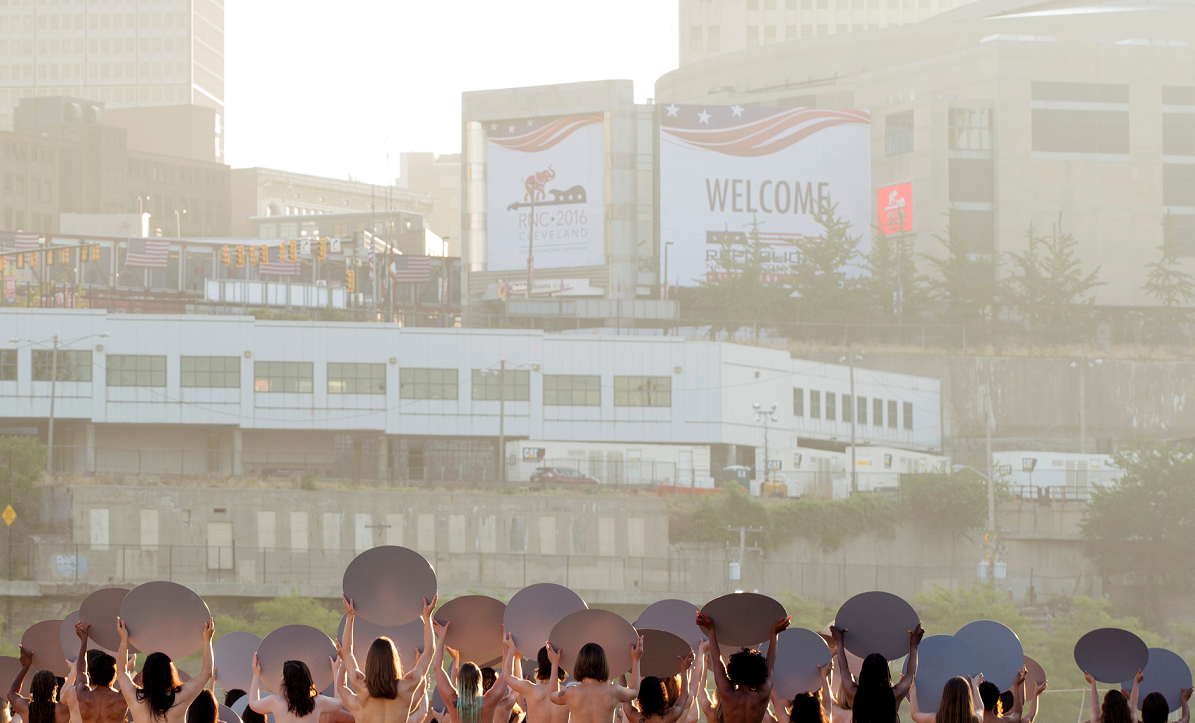 Women pose nude for photographer Spencer Tunick’s art installation “Everything She Says Means Everything” near the location of the Republican National Convention in Cleveland, Ohio, U.S., July 17, 2016. Photo by Lucas Jackson/Reuters

Photographer Spencer Tunick already has the unique distinction of having photographed large-scale installations of nude crowds.

For his latest, “Everything She Says Means Everything,” he gathered 100 female volunteers to pose naked, holding circular mirrors, outside the Quicken Loans Arena in Cleveland. His previous projects highlighted naked crowds posing against landscapes from the Sydney Opera House to downtown Munich, Germany.

Tunick received applications for this project from more than 1,800 volunteers, each of whom wrote a statement about why they wanted to participate. Women wrote about navigating life and politics in a female body — about lost pregnancies, sexual assault or living as a person of color. Some of the women who expressed interest in the project said they feel their body is an entity that affects, and is affected by, politics.

One woman said she wanted to use her body as a medium to protest the GOP’s stance on reproductive rights.

“As a woman, if I can use my body as a political statement as art for a peaceful protest I shall gladly do so. I am a Clevelander and gladly welcome this opportunity to display my female body as something that shouldn’t be shameful but beautiful and enlightening,” she wrote. 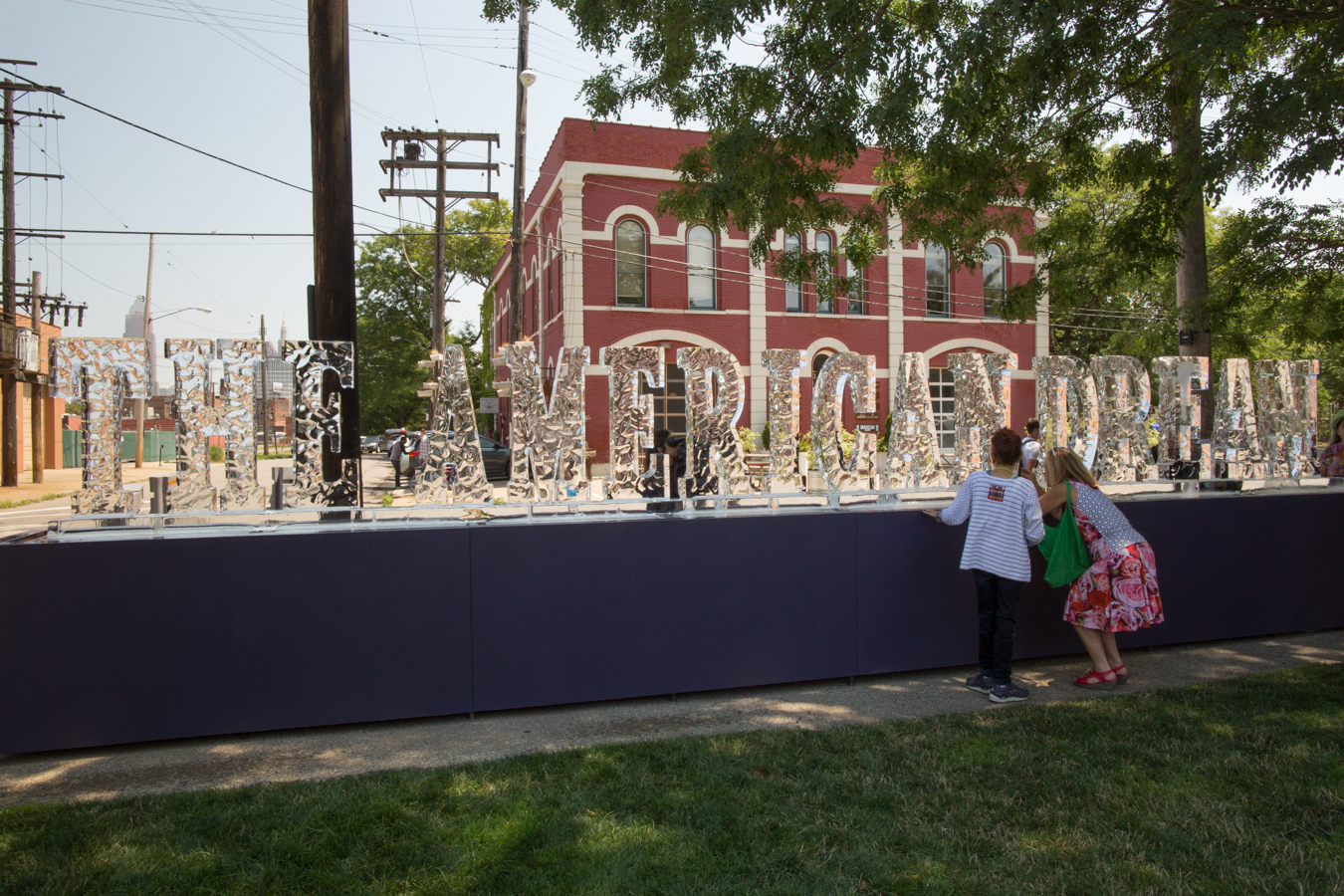 This ice sculpture of the words “The American Dream” melted over the course of roughly six hours at the Republican National Convention. Photo by Sue Abramson

Nora Ligorano and Marshall Reese are watching the American dream melt away.

The two Brooklyn-based artists, who work under the name LigoranoReese, started sculpting ice in 2006, and two years later unveiled “The State of Things,” an ice sculpture that spelled “Democracy.” The piece appeared at that year’s Democratic National Convention in Denver, where it took roughly 24 hours to melt, and at the Republican National Convention in St. Paul, Minnesota, where it lasted for five hours. In 2012, the pair staged another ice sculpture reading “The Middle Class” which melted at the conventions in Tampa, Florida, and Charlotte, North Carolina.

This year, the two are unveiling the largest piece they have ever created at the conventions in Cleveland and Philly. Reading “The American Dream,” the piece measures 35 feet wide by 5.5 feet tall and weighs 4,000 pounds. Sculptors carved each letter from a 300-pound block of ice at two different sites. Then, they wrapped both sculptures in thermal blankets and placed them in a giant ice bath for travel to the conventions.

Reese said the physical experience of watching the words “The American Dream” melt might bring up questions about the term itself, and how accurately it describes opportunity in U.S. society. “To see a word like ‘economy,’ or ‘the future,’ or ‘middle class,’ disappear, brings up so many ideas for many people, it affirms what they’re experiencing in their lifetimes,” he said. “I think it’s time to reconsider it, the idea of the American dream and who it’s for. In a way it’s an accepted term in political discourse and maybe it’s time to change it.”

In Cleveland, the piece took roughly six hours to melt, with viewers constantly interacting with the piece. “There’s a familiarity with it, there’s a need to touch them, to see if they’re real or not,” Reese said.

“The American Dream” will appear on July 25 at 1 p.m. EDT in Philadelphia’s Independence Mall. 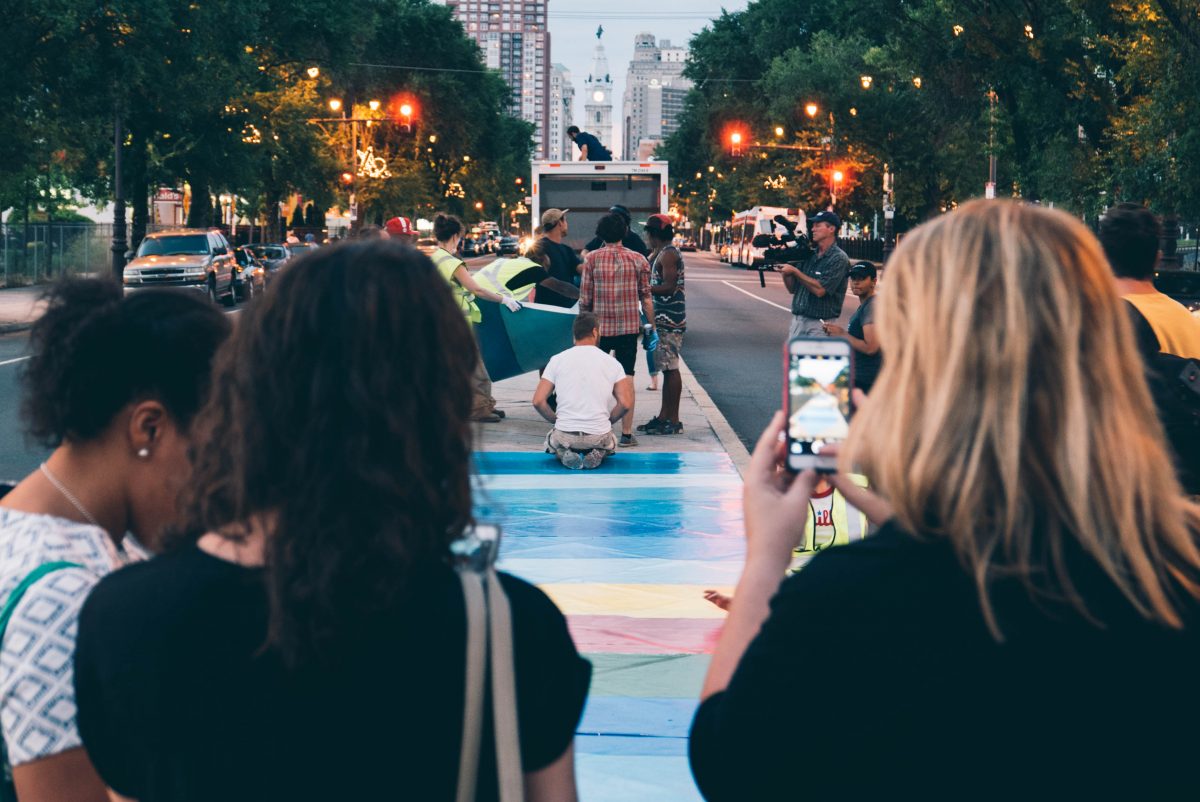 Artist Mat Tomezsko created a mural along the median of Philadelphia’s Broad Street to go on display before the Democratic National Convention. Photo by Brian James Kirk

Broad Street is “where everything connects” in Philadelphia, according to artist Mat Tomezsko. His new piece “14 Movements: A Symphony in Color and Words” speaks to that, linking Philadelphia’s City Hall and Washington Avenue with a vibrant mural on mile-long stretch of the S. Broad Street meridian.

Tomezsko first thought of the idea for the project four years ago, but the idea stalled until the Democratic National Convention Host Committee asked Jane Golden, executive director of Philadelphia-based Mural Arts, if she had any project proposals for the convention. She resurfaced the proposal, and Tomezsko got back on board.

It took three weeks to paint the mural on 500 pieces of vinyl, then a team installed it during the evenings from July 18 to July 21 to avoid disrupting traffic. Tomezsko said he hopes the piece will last for at least eight weeks.

The mural is “not overtly political,” but as a public art piece, it speaks to the city’s inclusiveness, Tomezsko said. “It’s very experiential, and once it exists it really belongs to the city. It reflects whatever the city is and whatever the people make of it,” he said.

Left: Naudia Loftus appears in a film from 'The Fixers,' a documentary series that focuses on several different individuals living in Cleveland. Photo courtesy of The Fixers