WATCH: How to make a Kentucky Derby-worthy mint julep

When it comes to the traditions of the Kentucky Derby, mint juleps are as essential as saddles. When thousands of spectators descend on the storied Churchill Downs race track in Louisville this weekend — to watch the horses race and place their wagers — many will have the classic bourbon-based cocktail in hand.

The exact origins of the julep are muddled, but it’s believed to have been formally introduced to the public by Senator Henry Clay of Kentucky in 1850 at D.C.’s Willard Hotel. It premiered at the derby in the late 1930s and became the race’s official drink in 1983. To get the inside track on the role the julep plays on derby day, I spoke with Churchill Downs’ executive chef David Danielson.

“Derby morning, you feel the energy of everyone coming in … people get through the gates, and one of the first things they do is go grab their juleps … it sets the tone for the day,” Danielson said. 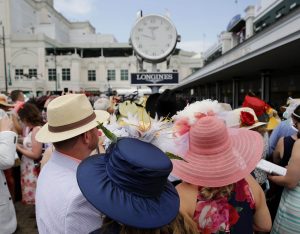 Patrons stand in the paddock area as they wear derby hats before the race. Credit: Mark Zerof-USA TODAY Sports

Crowds begin to gather at 8 a.m. ahead of the 6 p.m. race. Live music provides a soundtrack as patrons mingle. It’s as much a social event as it is a horse race, Danielson said.

Danielson spoke to me as pallets of locally-grown mint were being delivered in preparation for this weekend. Over the two-day period, the racetrack expects to serve between 120,000 and 130,000 mint juleps. This feat requires 2,000 pounds of mint and 60,000 pounds of ice. The crowd is expected to go through 10,000 bottles of Old Forester’s ready-to-serve mint julep cocktail, the official bourbon of the event. That’s enough bourbon to fill five 10-person hot tubs.

Pairing food with this strong cocktail is crucial. This year, Danielson’s menu will feature classic Southern staples: shrimp and grits, bourbon pickled peaches, and a beet and strawberry salad with poppyseed dressing.

“One thing that stands out and sets us apart from the other sporting events is the amount of local farms we use to showcase great local products,” Danielson says. The grits, as well as the vegetables, are sourced from within the bluegrass state. For an easy, sure-to-please savory bar snack to munch on while you sip, check out Chef Danielson’s recipe for crispy black eyed peas below.

To learn how this classic cocktail is made and how you can replicate it for your own Kentucky Derby party, I met with Parker Girard, the beverage director at Barrel, a bourbon bar in Washington, D.C. Watch his instructions for making Barrel’s signature mint julep below. 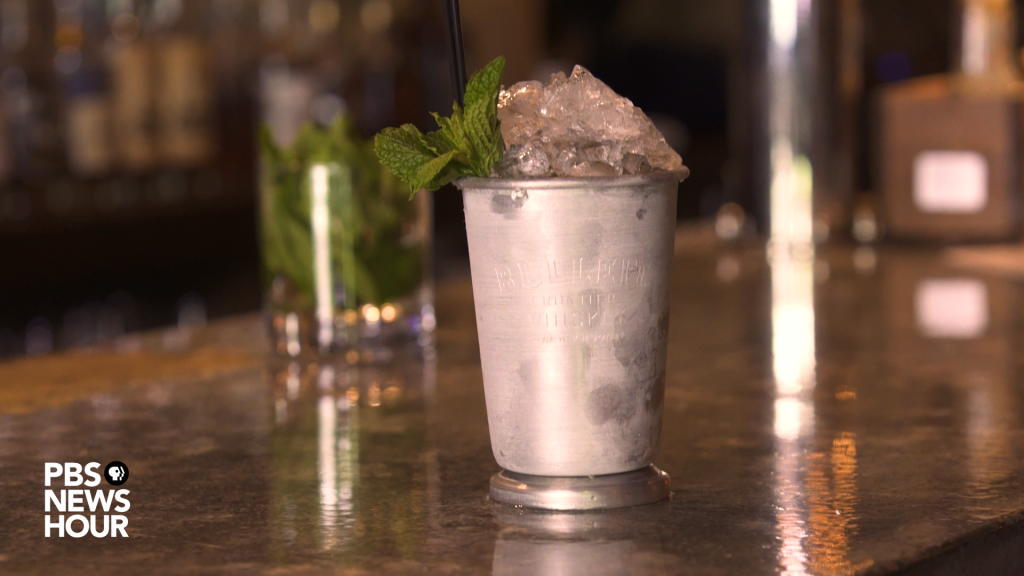 Take three to four mint leaves and place them in cocktail glass. Add the simple syrup and muddle. Remove and discard the mint.

Add the bourbon, one cup of ice, and stir. Top with remaining ice so that it forms a dome-like top on the glass. Finish with a garnish of mint and drink with a straw.

Place dried black eye peas in a large container. Fill with water to cover and let soak overnight, checking the water level periodically in case you need to add more water to keep them submerged. The next day, drain the peas and lay them on a paper towel lined baking sheet.

In a medium mixing bowl, mix all the dry ingredients and set aside.

Fill a three-quart pot with the oil and bring it to 350 degrees. In small batches, fry the peas for approximately six minutes. They should be cooked through but still crispy. Place the cooked peas back on the towel to drain excess oil.

Once all the peas are cooked, add them to the mixing bowl and toss with the dry spice mix until coated. Place in a bowl and serve!