When there’s an active shooter, can lighting save lives?

In the first few nights after a gunman opened fire at gay nightclub Pulse, killing 49 people, many mourned with light.

Rainbow light shone on across the New York City skyline, from City Hall to the spire of One World Trade. In Paris, the Eiffel Tower was lit, top to bottom, with the colors of the rainbow. And on Monday, hundreds of people stood outside Stonewall, where a 1969 riot against police launched the modern gay rights movement, and raised their cell phones and candles in solidarity as a speaker read the names of the victims in Orlando.

“If you go to [full house lights], you might be helping the active shooter by illuminating his targets. But if you have a blackout, you might be harming the patrons’ ability to exit the building.”

As the world paid tribute, lighting designers are quietly considering the question of what they could do to keep people safe in a similar scenario.

During performances in theaters and concert halls, lighting staff members are often situated on an elevated platform at an ideal vantage point to see that something is wrong before anyone else. Now, they’re wondering: in an active shooter situation, could their tools help curb a disaster?

One lighting designer considering this question is Washington D.C.-based Kathryn Blair. The morning of the shooting, she posted in a Facebook group for lighting enthusiasts, calling for the industry to brainstorm an active-shooter protocol for lighting staff — maybe at LDI, a lighting trade conference in October.

“What can we do in our capacity, with our equipment, to help you save lives and possibly hinder shooters?” she wrote.

Of all the media coverage from Orlando this week, Blair said one thing “haunts” her: a Snapchat video that 25-year-old Amanda Alvear posted showing the first few seconds of the shooting.

The video shows a club environment that is undisturbed in the first few moments of the attack. As shots rang out, the music continued to play and the club lights continued to flash their usual rhythm on the dance floor. Alvear was killed in the attack.

“You can tell in the background that nothing had changed,” Blair told the NewsHour. She wonders if a shift in lighting could have saved people in those first few moments.

“It’s not hard to shoot 12 rounds in the few seconds when everyone is trying to figure out what’s going on,” she said.

In theater, safety is a serious issue

Safety is not a new conversation in theater, with a complex set of guidelines in place for nearly every conceivable disaster. Safety standards for entertainment venues are usually enforced by an “authority-having jurisdiction,” usually the fire marshal, who is responsible for applying the National Fire Protection Association’s Life Safety Code, according to Kristi Ross-Clausen, a member of the Equity union for stage managers and IATSE union for stage hands who has been in the industry for more than 25 years.

Venues must also follow zoning codes, the National Electrical Code, comply with the Americans With Disabilities Act and be prepared in the event of a natural disaster.

The Occupational Safety & Health Administration under the U.S. Department of Labor maintains a list of standards for how employers (including theaters) can respond to natural disasters or disease outbreak.

Theaters also have the option of ALICE training, an active shooter training that many schools have adopted in the past few years, Ross-Clausen said. But safety information is often scattered across different agencies, and not necessarily clear to the staff who work live events.

Jim Digby, production manager for Linkin Park, founded the Event Safety Alliance after a 2011 incident at the Indiana state fair where a stage collapse caused seven deaths. The group works to consolidate safety information from national guidelines, building codes and their own recommendations.

“We, as an industry, have been very fortunate in that we don’t cause a lot of accidents with any regularity, but we also don’t follow standardized protocol as of yet,” Digby said.

‘I’m one of the first targets’

There was one point of agreement between those interviewed for this article: despite the guidelines professionals in the industry follow when it comes to safety, there is no clear set of standards for lighting staff in an active shooter situation.

Nook Schoenfeld, a lighting designer who has toured with the Beastie Boys and Gloria Estefan, said in his 30 years of experience, many venues he has worked at have “absolutely zero” preparation for an active shooter.

“That’s a definite concern,” he said. “We have nothing going on, and we need to have something going on. This is definitely the time to start thinking about it.”

In many venues, technical staff run the lighting board from a raised platform. That makes those staff particularly vulnerable in an active shooter situation — and makes this conversation all the more urgent for them, Schoenfeld said.

“There’s no doubt in my mind that I’m one of the first targets that somebody would shoot at,” he said. “And I’m in the position where I’m the [last] person to escape. Once they’re there, I’m surrounded by people that will be going in every direction.” 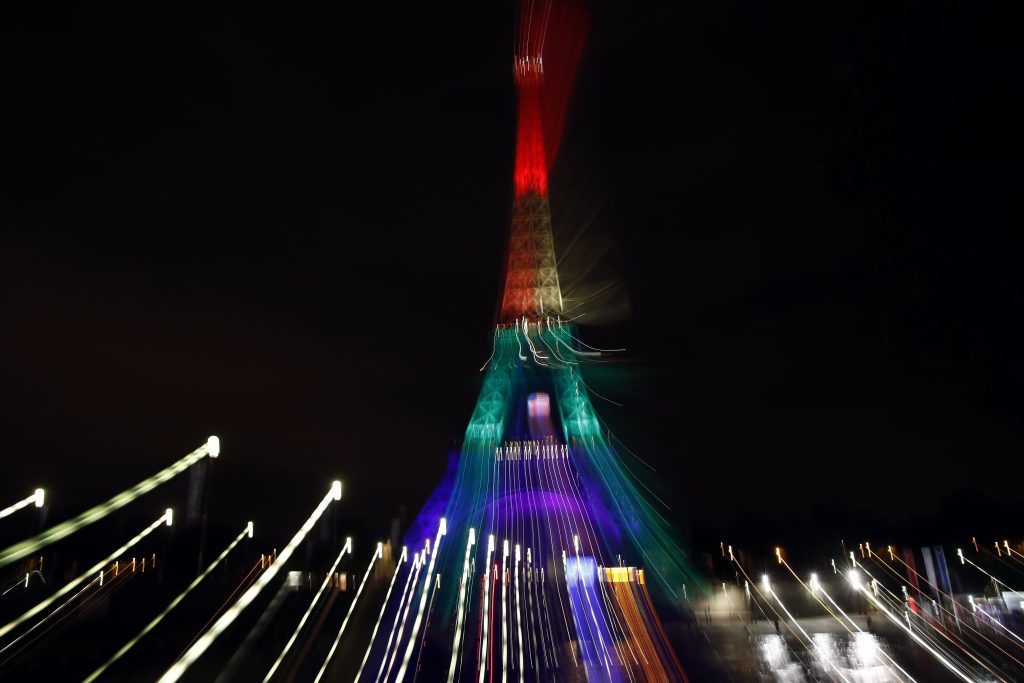 The Eiffel Tower is illuminated in memory of the victims of the gay nightclub mass shooting in Orlando, in Paris, France, on June 13, 2016. Photo by Gonzalo Fuentes/Reuters

Designing for an emergency situation

On Nov. 13, three gunmen killed 90 people at the Bataclan concert hall in the Marais area of Paris during a Eagles of Death Metal concert. In recent days, a number of media outlets have drawn comparison between the the Bataclan and Orlando, including French newspaper Le Parisien, which wrote that in both instances the crowd had “taken a little time to understand what was happening.” Nathalie Jardin, a 31-year-old lighting designer who had worked at the Bataclan for four years, was among the victims of that attack.

Richard Cadena, a production electrician based in Austin, Texas, said a central point of debate is whether to turn on all the house lights in the event of an emergency, or keep them off and only illuminate the exits.

“The debate is, if you go to [full house lights], you might be helping the active shooter by illuminating his targets. But if you have a blackout, you might be harming the patrons’ ability to exit the building,” he said. “I don’t think there’s a definitive answer to that.”

Ross-Clausen said that lighting staff could flash the house lights on and off, which could signal a warning to a crowd “if it’s a slow enough repetition of the flash.”

“I fear that what we’re seeing here is a new norm.” — Jim Digby, founder of Event Safety Alliance

Michael Friedline, a lighting designer and owner of TFG Event Support Services in Galveston, Texas, also posted in the same Facebook group as Blair to ask others to brainstorm solutions. “A House Manager/DJ/light tech usually has a commanding view of an event and often is the first aware of a emergency,” he wrote. “However suddenly bringing an event/club to a halt might induce more panic.”

Friedline pointed out that in a number of venues, the switch for the house lights is inaccessible to the first people who might notice an active shooter. “House lighting might be someplace accessible to the technical crew, or it might be down a hallway almost half a block away,” he said.

And in an emergency, most manual solutions put the onus on lighting staff to stay in position and risk their lives. Blair also proposed the idea of a “panic button” — a standardized set of lighting cues that could be activated by one push of a button. In an entertainment venue, “we control everything that you would see and hear,” she said. But in an attack, “we should immediately surrender that to something that’s automated.”

Right now, there are no concrete answers, only a consensus that these questions are not going away, Digby said.

“I fear that what we’re seeing here is a new norm,” he said. “There isn’t going to be one solution that fits everything.”

Left: St Georges Hall is illuminated with a rainbow flag following a vigil in memory of the victims of the gay nightclub mass shooting in Orlando, in Liverpool, northern England, on June 13, 2016. Photo by Phil Noble/Reuters